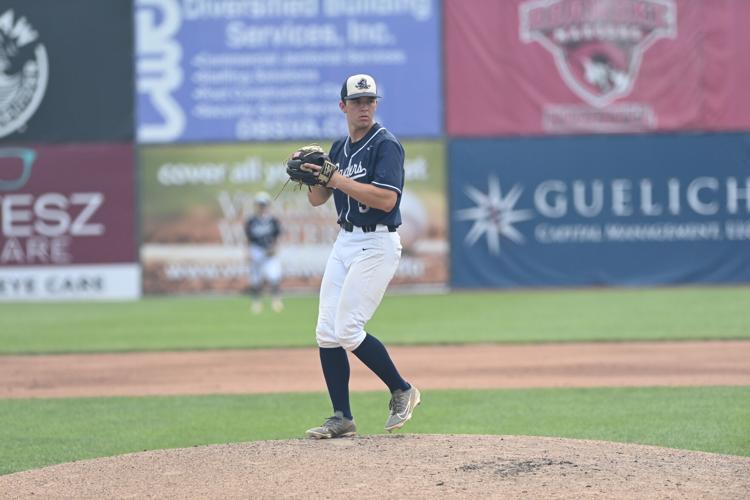 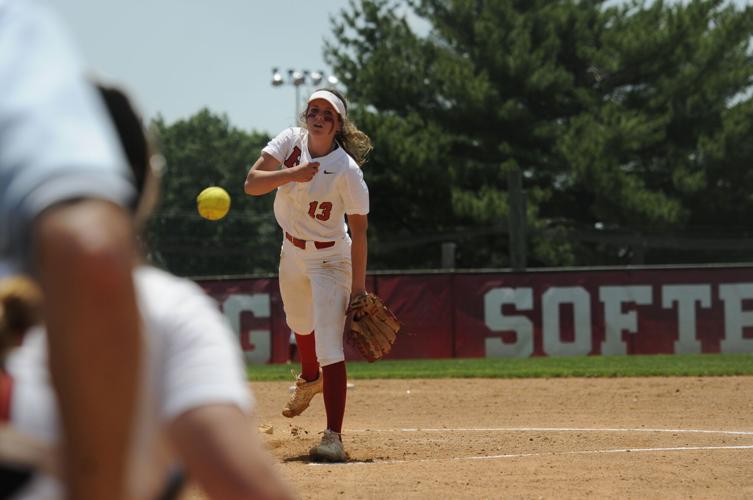 Rustburg grad Eden Bigham delivers a pitch during a Region 3C quarterfinal game against Brookville on May 30. The All-American, who captured a state title one year ago, was named to the VHSL’s Class 3 all-state second team Wednesday. 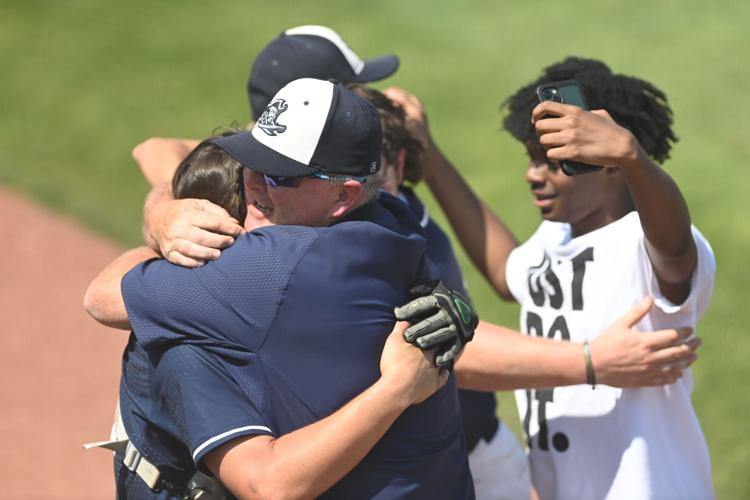 Joe Caruso hugs his players after the Class 2 state title game on June 11. The Appomattox baseball coach was named coach of the year for Class 2 on Wednesday. 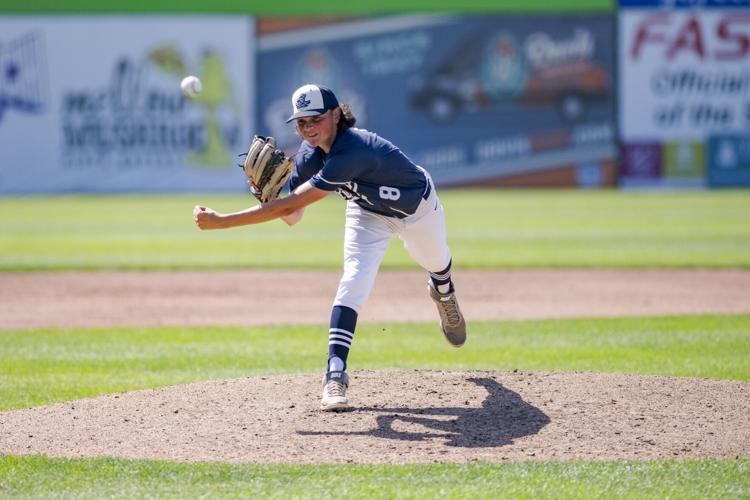 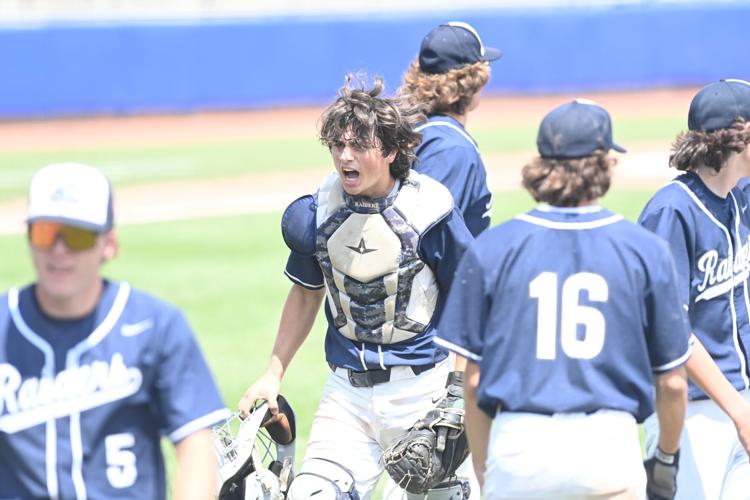 Catcher Trey Shrock (center) yells after Appomattox gets out of an inning against John Battle on Saturday. 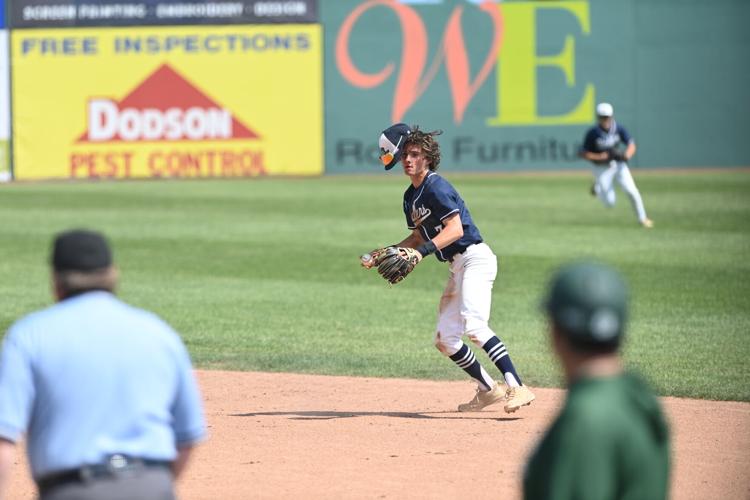 Appomattox second baseman Nate Dillon prepares to throw to first for the final out during the Class 2 state championship game against John Battle at Salem Memorial Ballpark.

Alex Caruso was named player of the year Wednesday afternoon, and Joe Caruso took home coach of the year honors.

Alex Caruso, who was honored for his pitching duties, enjoyed a breakout campaign this season. The right-hander went 9-0 with a 1.76 ERA in 39⅔ innings, recorded one save and struck out 53 batters. Previously, he had been named the Region 2C player of the year. He threw a complete game in the state championship and drove in one run. Four of his victories occurred in the playoffs, three of them in relief appearances. The junior also hit .416 with 32 hits, two home runs and 32 runs batted in.

Shrock, a junior, led the Raiders at the plate by hitting .467, with 35 hits, one homer and 16 RBIs from the leadoff spot. He stole a team-high 16 bases and finished the season with a team-best 35 runs scored. Schrock also posted an eye-popping 1.27 on-base plus slugging percentage.

Garrett, a senior southpaw who threw a four-hit shutout in a 1-0 victory over Stuarts Draft in the state semifinals, went 5-1 with two saves. He posted a 1.69 ERA and struck out 50 in 41⅓ innings. He also hit .388, with 26 hits and 25 RBIs. He put the ball in play all season, striking out just three times in 80 plate appearances.

Joe Caruso led Appomattox to a 23-1 record, the Dogwood District regular-season title and the region championship in addition to the state title.

To view the complete all-state team, scroll to the bottom of this report.

Rustburg pitcher Eden Bigham added one more postseason honor to her career haul Wednesday when she was named to the Class 3 second team.

Bigham, a right-hander, was one of six pitchers selected to all-state teams in the division following her stellar senior campaign. She previously has been named Seminole District pitcher of the year and earned a first-team nod in Region 3C.

In helping the Red Devils to the Region 3C quarterfinals, Bigham posted a 17-3 record (13-0 in Seminole District play), seven shutouts and six no-hitters, including one perfect game. She allowed 35 hits and issued 19 walks while striking out 280 batters in 118 innings pitched (good for 16.6 Ks per seven innings).

As the season neared its end, Bigham broke the Rustburg record for career strikeouts held by her coach and mom, Katie Bigham, and finished with 852 Ks.

Through three seasons (with her sophomore season canceled because of the pandemic), the younger Bigham gave up 31 earned runs for a career 0.57 ERA to go with a strikeouts-per-seven-innings rate of 15.7, 17 total no hitters and six perfect games, and a 51-9 record. She also captured a state championship last year.

She will enter the VHSL record book near the top of at least seven single-season and career categories.

Liberty Christian junior Mia Detwiler was the lone girls soccer player from the area represented on the Class 3 all-state teams. She earned one of four spots for defenders on the second team, adding to the first-team all-Region 3C and all-Seminole District honors she previously picked up.

Detwiler helped LCA to a 13-7 record and trips to the Class 3 state quarterfinals and Region 3C championship game.

To view the complete all-state teams, scroll to the bottom of this report.

A four-hole stretch prevented New Covenant rising junior Luke Libbey from advancing to the Round of 16 of the Virginia State Golf Association’s Junior Match Play Championship.

Libbey bogeyed Nos. 4, 6 and 7 in Wednesday’s second round of stroke play to fall back to even par for the round, then recorded back-to-back birdies to finish his round at 2-under 70 at Willow Oaks Country Club in Richmond.

His two-day aggregate total of 2-over 144 left him two shots out of the 16th and final spot for the match play rounds.

Libbey shot 4 over in the first round and quickly moved up the leaderboard in the second round. He made three straight birdies at Nos. 12, 13 and 14 to move to 1 over, and he was at 1 over through No. 3.

The trio of bogeys dropped Libbey to four shots back of the cut line and out of contention.

Douglas was a second-team selection as a punt returner. Wide receiver Caleb Snead (Heritage) and safety JaVon Scruggs (Appomattox) also are on the second team.

Doan was a Division I second-team selection. She joins her coach, Heather (Sagan) Zealand as the only two female track & field athletes in Liberty history to claim All-America and Academic All-America honors. Doan, who maintained a 3.99 GPA and graduated with a bachelor’s degree in exercise science, was an All-American in cross country.

Davis picked up her second third-team Academic All-American honor of the season after previously garnering the honor in women’s basketball, and she is the first Lynchburg athlete to achieve that feat in the same season. She holds a 3.96 GPA as a biomedical science major and plans to attend medical school.

Lerro earned third-team honors from CoSIDA in the at-large division, which includes multiple minor sports. She was one of just 15 field hockey players across all NCAA divisions to earn the honor, and she's the only field hockey player in Division III to earn repeat recognition (also becoming the UL program's first to repeat).

In her five-year career at Lynchburg, Lerro helped UL to three ODAC titles and garnered four All-America honors and five all-region and All-Old Dominion Athletic Conference honors. Lerro earned her undergraduate degree in economics and philosophy with a 3.87 GPA and held a 3.9 GPA in the fall as she pursued a master's in business administration.

Game 2 of the six-game series between Lynchburg and Delmarva originally scheduled for Wednesday evening in Salisbury, Maryland, has been postponed because of inclement weather. The Hillcats and Shorebirds now will play a doubleheader consisting of two seven-inning games starting at 5:35 p.m. Thursday.

The twin bill will determine one of two playoff berths from the North Division. Lynchburg, Carolina, Salem and Fredericksburg are all in the hunt. A doubleheader sweep Thursday will give the Hillcats the playoff spot. Anything less than a sweep will knock them out of contention.

"I hope that the players and coaches and administrators knew that I had the best interests of the school and the kids at heart. It wasn't about me. It was about trying to build better men through the game of football."

A rundown of Tuesday's high school, college and Minor League Baseball news from the area.

News of the day from the prep scene.

Appomattox's "PO1" heads from the gridiron to the blacktop

Appomattox's football team is headed to Xfinity and beyond.

After Further Review: Tough as nails

"I've never seen anything like it in all my 45 years around baseball."

One down, four to go. Alaysia Oakes made winning look easy on her first day at the Class 3 state track & field championships.

For a pair of perfect games in the state tournament, Layne was named the national high school player of the week by Extra Inning Softball on Tuesday. She also has been named the VHSL's Class 2 player of the year.

Rustburg grad Eden Bigham delivers a pitch during a Region 3C quarterfinal game against Brookville on May 30. The All-American, who captured a state title one year ago, was named to the VHSL’s Class 3 all-state second team Wednesday.

Joe Caruso hugs his players after the Class 2 state title game on June 11. The Appomattox baseball coach was named coach of the year for Class 2 on Wednesday.

Catcher Trey Shrock (center) yells after Appomattox gets out of an inning against John Battle on Saturday.

Appomattox second baseman Nate Dillon prepares to throw to first for the final out during the Class 2 state championship game against John Battle at Salem Memorial Ballpark.