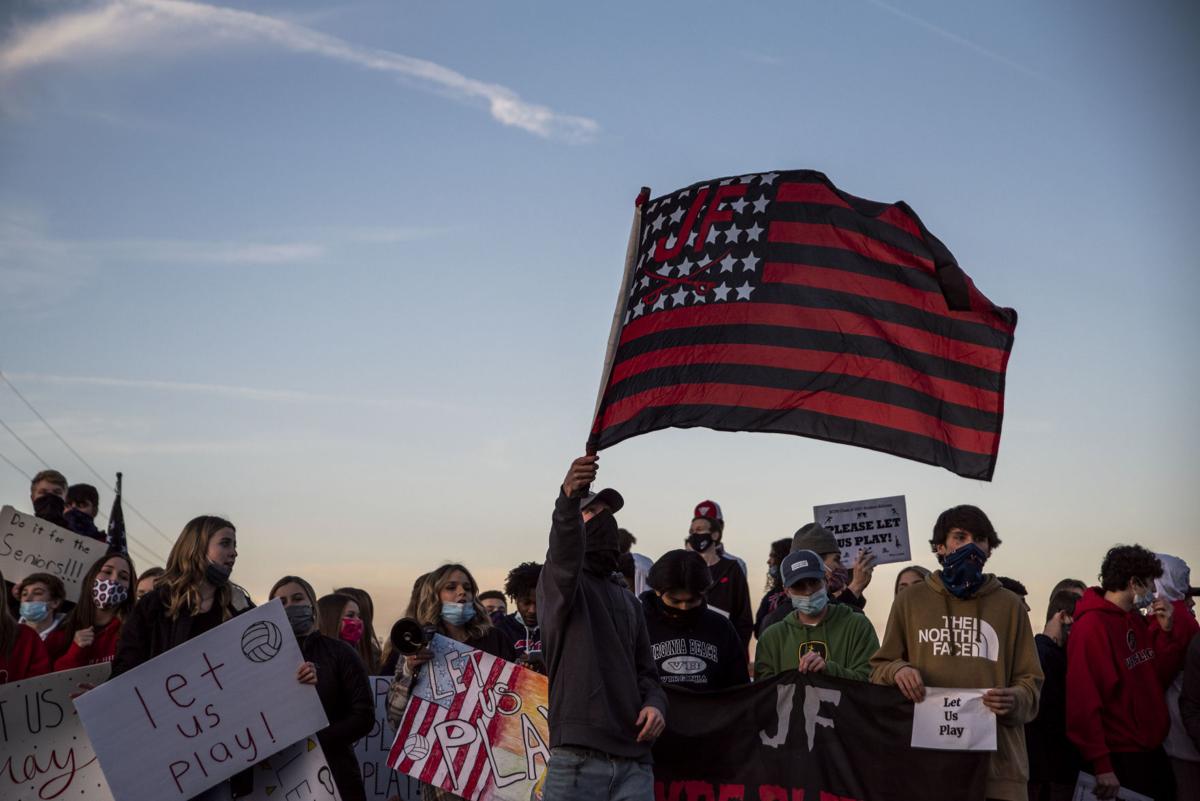 Senior lacrosse and a golf player Will Hunter waves the Jefferson Forest High School Flag while participating in a rally in support of winter sports during the Bedford County school board meeting on Thursday, Jan. 14, 2021. 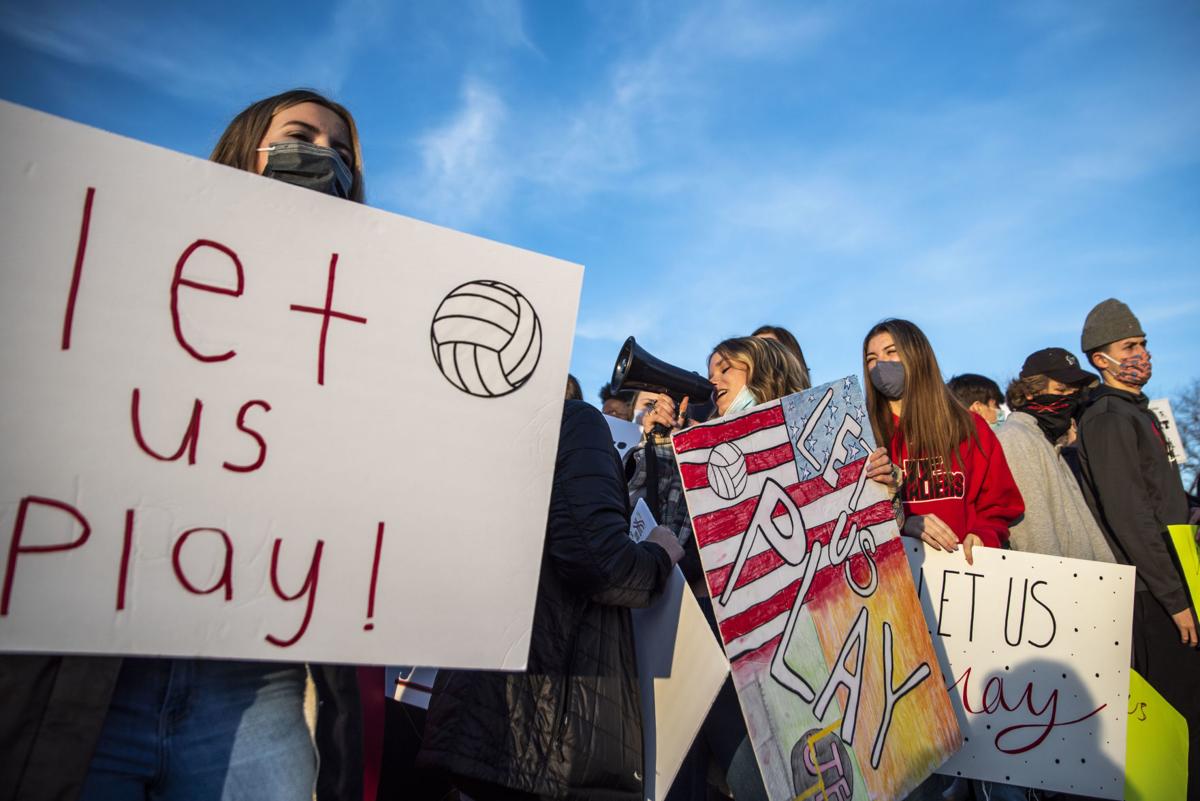 Jefferson Forest High School senior volleyball player Sophia Gerni yells into a megaphone while leading students participate in a rally in support of winter sports during the Bedford County school board meeting on Thursday, Jan. 14, 2021.

The Bedford County School Board on Thursday night voted to allow athletes and teams to compete during the fall and spring seasons.

After about two hours of discussion during a special called meeting, the board voted unanimously to support a return to play with a number of mitigation measures in place.

The county will follow a return plan based on a 26-page document that includes an exhaustive list of safety measures. Virginia High School League measures, included in the document, also will be followed.

As part of the vote Thursday, the board also approved three updates to the plan division staff originally had presented.

Junior varsity teams will be allowed to practice and play inter-county games (the division’s originally proposed plan only allowed for varsity teams to play). Volleyball teams and opponents that travel to Bedford for games will be required to wear masks during play. And while no spectators are allowed during games, the board approved one exception for a designated Senior Night, when each senior athlete is given two spectator tickets.

Jason Johnson, the board’s newly elected chair, said the return plan is “not a plan everyone is going to like every aspect of; it is a compromise, after all,” adding “there are pieces that we all would like to look different, but in the effort of getting athletics and safety on the same page, I think this is a good thing.”

Johnson was one of four, with fellow members Georgia Hairston, Susan Mele and John Hicks, to vote against a return for winter sports in the past.

Athletes and parents are required to sign a permission form and agree to abide by the county’s mitigation plans to be able to participate in the upcoming seasons. Athletes not in compliance can be removed from teams.

Highlights of the plan, developed and reviewed by a group of more than a dozen division and school officials, include:

» No athletes will be allowed to play travel/AAU/club sports while playing for their high school teams.

» Only one team travels from each school per day.

» Teams with more than 40 athletes must designate a travel team.

» Athletes must abide by social distancing and mask measures on buses and on sidelines.

» All visitors from the visiting team will undergo temperature screenings.

Julia Rogers, acting Bedford County Public Schools superintendent, also said sickness, should it arise, will be dealt with on a “case-by-case” basis. Contact tracing already in place in the division will continue.

The board’s vote Thursday comes after several previous discussions, and votes, on bringing back athletic competition. Winter sports previously had been discussed, but those teams are not allowed to return to competition under the board’s Thursday vote.

In December, the board initially supported a return to winter competition, but with a caveat — if Bedford County or opponents in other localities were in the highest-risk category, “red” category, as defined by the Virginia Department of Health, games would not take place. Bedford remained in the category, and therefore no games took place during the winter regular season.

A vote about a week later during a special called meeting to lift those restrictions failed, 4-3.

Thursday’s meeting did not include discussion about the VDH’s school risk metrics, and the vote did not include a stipulation about playing while in a particular risk category. Bedford County, as of Thursday, was in the highest-risk, “red” zone for 14-day case incidence and 14-day percent positivity numbers.

Discussion Thursday night also included hopes from a few members to ramp up competition opportunities for JV teams — such as having squads play home games to avoid potential travel issues — and the possibility of bringing back middle school and B teams, but no action was taken on those matters.

“We need to explore all avenues to ensure these kids have the opportunity to compete,” said board member Martin Leamy, who, with fellow members Susan Kirby and Marcus Hill, has consistently stated through discussions about return to competition he wanted athletes to play.

The group that developed the return plan will reconsider avenues for play for those teams, and division staff will present a report at the board’s next meeting Feb. 18.

Rogers added return to competition plans could be “scaled up” going forward if case numbers in Bedford trend in a better direction and the division is able to logistically accomplish plans in the coming weeks. She said discussions around such moves could take place during the board’s March meeting, before spring sports commence.

Hill also asked that winter teams that missed out on their season be given the chance to play inter-county games; but that option was not discussed or voted on because it was not on the meeting agenda.

Football began practicing Thursday under the VHSL’s modified 2021 calendar, with additional fall teams allowed to begin practices in the next two weeks. Competition begins Feb. 22, starting with football. Practices for spring sports begin in mid-April, with the first games scheduled for the end of that month.

Heritage shuts out Amherst behind Booker and Burns

He has just two varsity starts to his credit, but Heritage's Rajan Booker is quickly becoming one of the Seminole District's most dynamic running backs.

In Bedford, Silas Rucker set the tone early for Brookville, which raced out to a three-score lead and never trailed in a 32-6 victory over hos…

Wild days on the prep scene

"We got dominated [Monday]," new Nelson coach Darrin McKenzie said. "We didn't like that feeling and we weren't gonna let it happen again."

Senior lacrosse and a golf player Will Hunter waves the Jefferson Forest High School Flag while participating in a rally in support of winter sports during the Bedford County school board meeting on Thursday, Jan. 14, 2021.

Jefferson Forest High School senior volleyball player Sophia Gerni yells into a megaphone while leading students participate in a rally in support of winter sports during the Bedford County school board meeting on Thursday, Jan. 14, 2021.