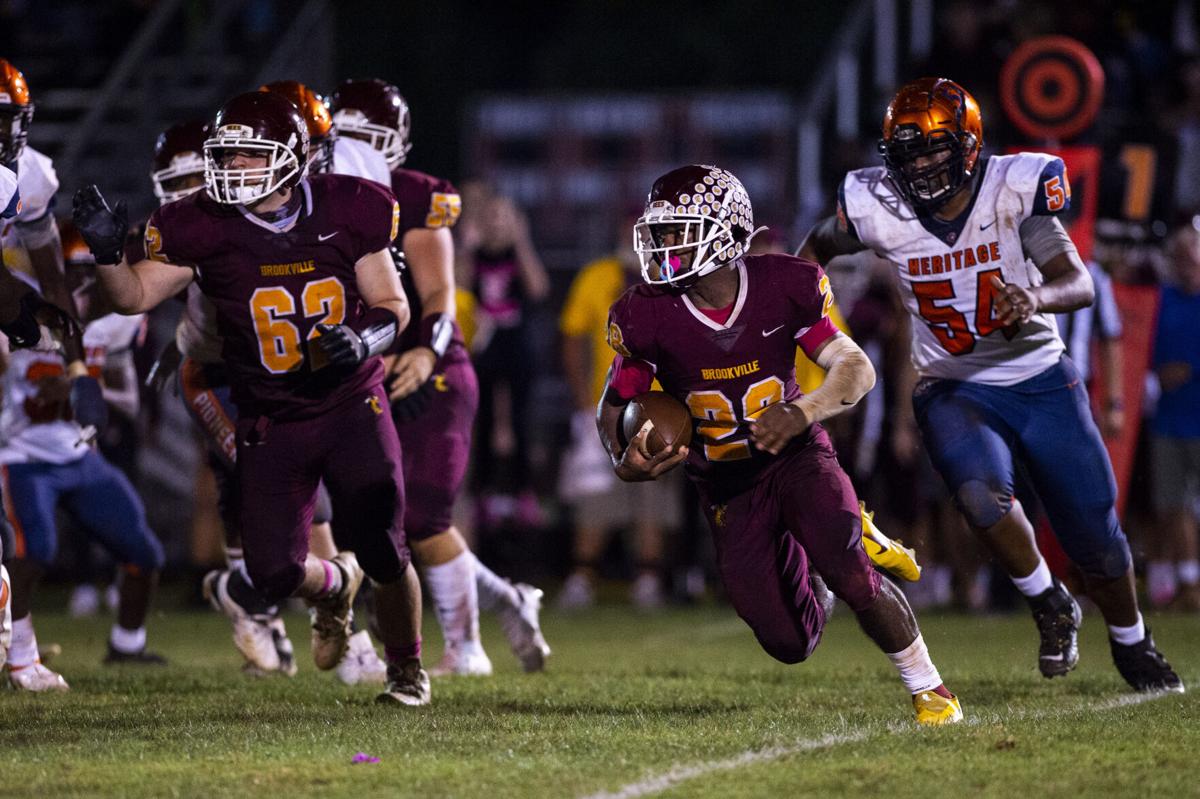 Brookville running back Tayshaun Butler runs the ball against Heritage at Stinger Stadium on Oct. 8. 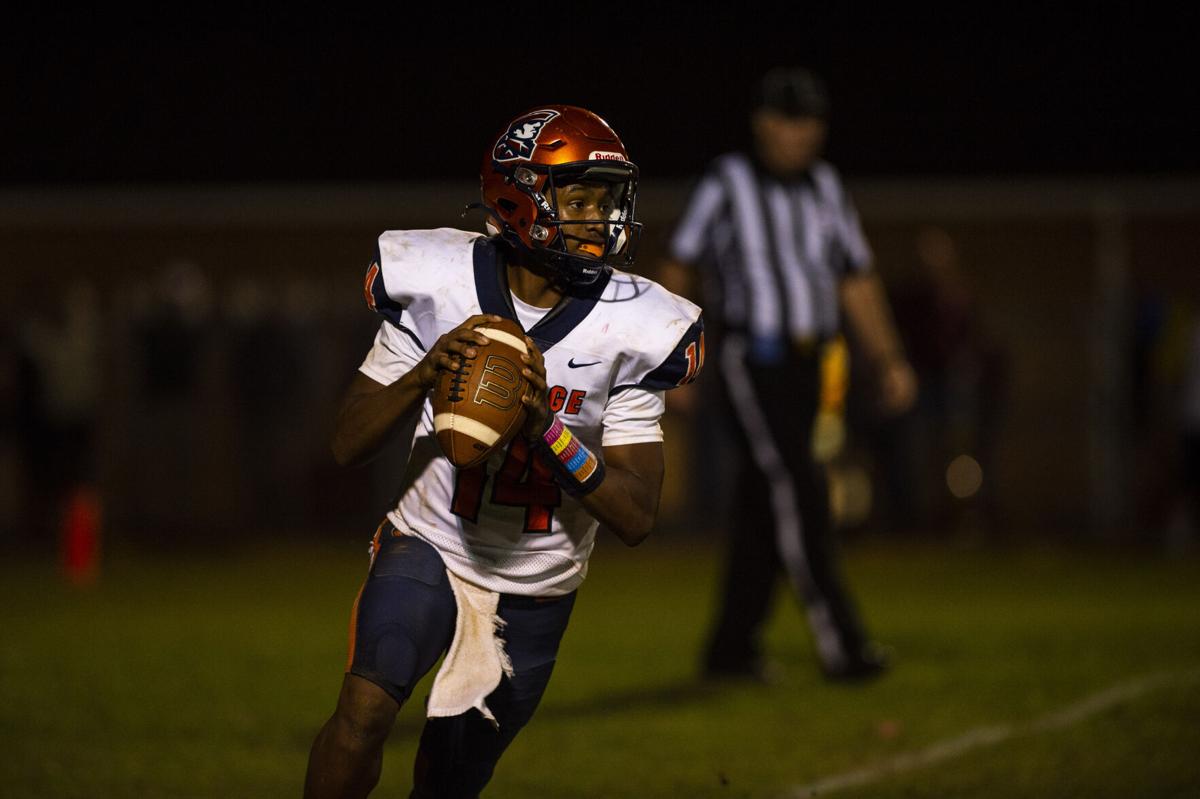 Heritage quarterback Kameron Burns looks for a receiver against Brookville at Stinger Stadium on Oct. 8. 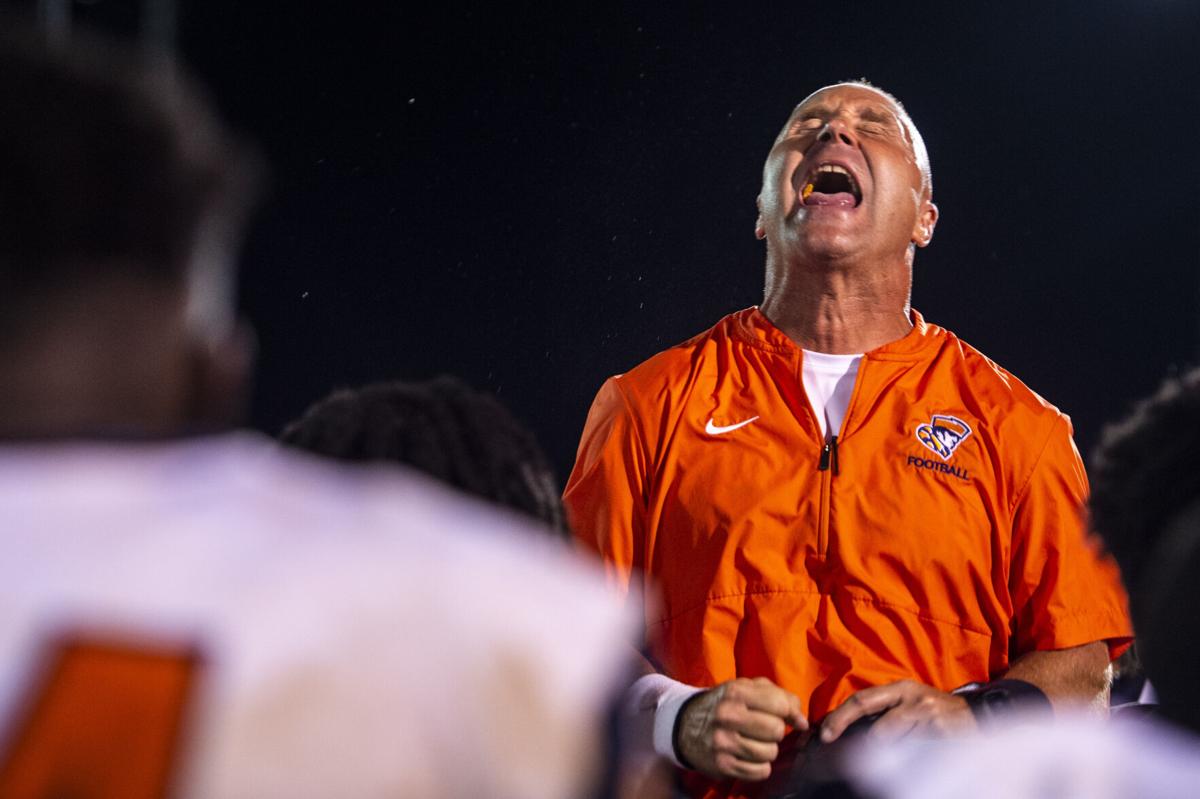 Heritage head coach Brad Bradley celebrates with his team after defeating Brookville in double overtime during a game at Stinger Stadium on Oct. 8.

Darius Brown batted down a pass from Brookville's Drake McDaniel last month when Heritage defeated Brookville 30-23 in double overtime. It was the final, decisive play in a game filled with highlights.

"It was one of the best games," Brown said Thursday after Heritage had made its final preparations to play Brookville again, this time in the Region 3C semifinals. "It was just a great atmosphere. Two teams that wanted it just going at it, and it was fun. It's gonna be an even better game [Friday]."

Brown wanted to pick the ball off that night. But it was fourth down for Brookville, and simply breaking the pass up was all Heritage needed for the win at Stinger Stadium that night. Now Brookville (7-3) travels to City Stadium looking for revenge, while Heritage (8-2) hopes to continue its season.

"That was, like, the most exciting game we've played," Brookville junior Andrew Cole, the offensive line's leader, said. "We had penalties and mental mistakes, but otherwise I think we should've won. I think it'll be a close one. They're pretty good, but I think this time we're gonna come out with the win."

Heritage knows it has to contain Brookville senior running back Tayshaun Butler, who can cause all kinds of havoc. He's rushed for roughly 1,600 yards and 17 touchdowns and is fresh off a four-touchdown, 216-yard performance last week against Rockbridge County. He's also become BHS' leader in receiving yards since Ethan Robey went out with a season-ending injury in the latter half of the regular season.

Brookville has morphed into more of a running team, using Silas Rucker and Jaylyn Marshall to complement Butler. And McDaniel also has become a running threat. He rushed for nearly 100 yards last week and has thrown for more than 1,200 yards while rarely tossing an interception.

"I expect it to be a little bit like the first one," Butler said about Friday's game. "Everybody's season's on the line. It's playoff time, so it's gonna be a different energy. ... I expect their best shot. I expect them to have a pretty solid game plan, but I hope we can work our way around it. ... There's no doubt in my mind that we can win. We have to establish the run. Once we do that, we're a pretty hard team to beat. And then our defense, our defense is firing on all cylinders."

Heritage coach Brad Bradley is proud of his squad, if only for the work it has put in to get to this point. Heritage returned just three starters on defense and five on offense from the spring season. Win tonight and the Pioneers will play for a chance to win the Region 3C title.

"Both teams have to eliminate those mistakes," Bradley said. "We have to have a fast start. [Last season] we lost to Brookville and we turned the ball over four times. ... We have to make Brookville beat us and not beat ourselves. It doesn't matter if we're playing Brookville or the Dallas Cowboys, we've got to take care of ourselves."

Pioneers senior defensive back Donovan Jones has been impressed with his team's fortitude this season.

Brookville coach Jon Meeks said his team has to guard against the explosive plays Heritage is capable of.

"I've literally coached against them several times and felt like we controlled the game from a defensive perspective really well and we still lost because they always find a way to make big plays," Meeks said. "We could hold them three-and-out, three-and-out, and then boom. And you always have three or four big what-if plays. ... That's what they do. They find a way."

Meeks expects another thriller Friday, a physical affair with two teams that don't know how to quit.

"That's the epitome of what high school football should be," Meeks said of the first matchup. "It was two teams, I thought, that laid everything out on the field and went at it all night. No talking, low-penalty game, hard hitting, helping other guys on the other team back up. Mutual respect. We know how good they are, and I think they feel the same way about us."

Friday's game marks the third time in the last five seasons the Bees and Pioneers have met in the playoffs. They've grown accustomed to each other, but October's battle added a new wrinkle to the rivalry, one that will carry over in the minds of players when they line up Friday night.

"I think our kids have prepared well," Bradley said. "Their focus has been there this week. There aren't a lot of motivational speeches you have to give ahead of this one."

Wednesday marked the initial signing date for those headed to NCAA Division I and II schools.

Brookville running back Tayshaun Butler runs the ball against Heritage at Stinger Stadium on Oct. 8.

Heritage quarterback Kameron Burns looks for a receiver against Brookville at Stinger Stadium on Oct. 8.

Heritage head coach Brad Bradley celebrates with his team after defeating Brookville in double overtime during a game at Stinger Stadium on Oct. 8.