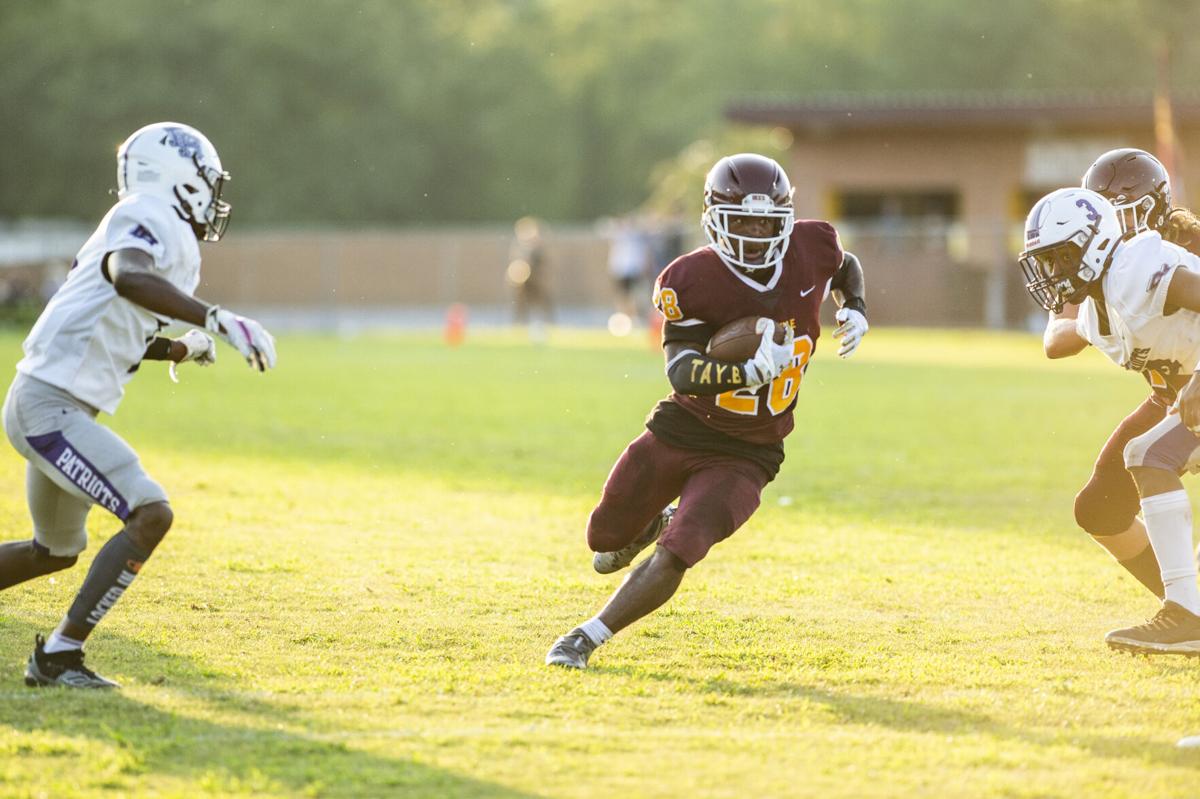 Brookville running back Tayshaun Butler runs between a pair of Patrick Henry defenders at Stinger Stadium. Butler has rushed for nearly 400 yards and scored 10 total touchdowns this season. 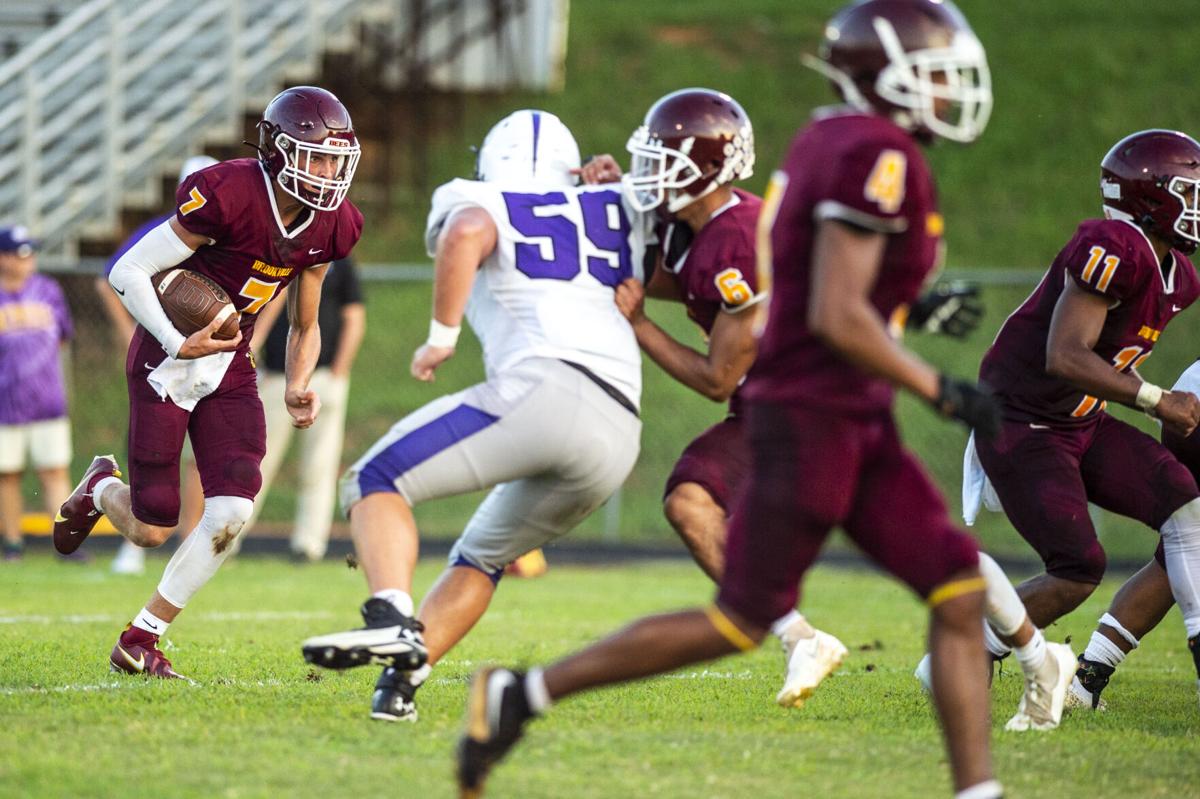 After a perfect regular-season spring campaign, Brookville was stifled in the first round of the playoffs in April by a stout Liberty Christian team intent on revenge.

The Bees haven’t forgotten it.

“We talk about it every day,” Brookville junior quarterback Drake McDaniel said after Thursday’s walk-through practice. “It’s an every day thing. We’ll be sitting at the lunch table and we talk about it.”

Revenge, as LCA could tell you after it knocked off Brookville 42-14 that night to avenge its 25-14 opening-night loss, can feel mighty sweet. Now it’s Brookville’s turn to use a stinging loss as motivation. The two undefeated squads, vying with several other teams for Seminole District supremacy, meet at 7:30 p.m. Friday at Liberty University’s Williams Stadium.

“We definitely had a bad taste in our mouths after last year, but we are looking to come back and for a different result,” Bees linebacker Addison Ellis said.

Brookville (3-0) has showcased suffocating defense this season, holding opponents to 9.6 points per game while averaging 51 on offense. LCA (3-0) averages 53.6 points a game and has allowed 22.6.

In five matchups dating back to 2017, the Bees are 3-2 against LCA, with the Bulldogs barely outscoring BHS 117-111. Four of the five games have ended up close, with the winning team having to stay on the gas until the final whistle.

“Last time we played them they got the upper hand,” Brookville coach Jon Meeks said, “so we’re looking forward to getting another shot at them.”

LCA must contend with McDaniel, who has completed 23 of 31 passes for 416 yards and thrown eight touchdowns while not tossing an interception. He threw four TD passes in last week’s 68-14 victory over Jefferson Forest. Running back Tayshaun Butler has given the Bees a shot in the arm by rushing for nearly 400 yards and scoring 10 total TDs (seven rushing, one receiving and two interception returns).

“They’re a real good high school football team, and we respect them a whole lot. They have so many Jaylin Belford-type kids,” LCA coach Frank Rocco said Wednesday, referencing LCA’s dynamic receiver/returner/tailback, who received a preferred walk-on offer from North Carolina following last week’s win. “We have Jaylin; they have six of him. I’ll take our Jaylin, but they have six of him. So that makes it really difficult. The fact that they are very creative with formations and things they do that, if you’re not disciplined and trained properly, it can cause you to get misaligned on defense.

“All those quick guys need is just 1 yard of misalignment and all of the sudden they hit the seam and they’re gone. So if we can play disciplined and be in our spots, we’ll contend. But if we let them get out [in the open field] it’ll be a tough night.”

That’s perhaps what makes this matchup so intriguing. Brookville and LCA don’t always mirror each other, but they feed off the same type of gritty, determined play, and they’re both extremely dangerous if not kept in check. And each offense has the ability to pull off unexpected plays that can swing the game in their direction.

“They do a lot of different things to give you different looks,” Meeks said of the Bulldogs. “If you don’t line up right or you don’t do your assignment, they got athletes. You’re gonna pay.”

Ellis, a 6-foot-2, 230-pound senior, has filled in wherever he’s needed this season: defensive end, defensive tackle, outside and inside linebacker. Brookville has to win the battle up front to defeat LCA, he said. On Friday, he’ll be one of several players to suit up against 6-6 lineman Zach Rice, one of the most decorated offensive tackles in the country who plays both ways.

“Two of the best teams in the area going against each other,” he said. “I think it will be a good test to see what we’re really made of.”

McDaniel echoed those sentiments. “O-line and D-line need to step up this game,” he added. “Whoever wins up front is gonna win this game, I think.”

Another task for these veteran Bees: eliminate explosive plays, what Meeks refers to as plays that result in 40-yard gains or more.

“And then offensively we’ve got to execute,” he added. “In two scrimmages and three games we’ve been able to do that really well, and I credit my O-line. They’re playing well and they’re gonna have to continue to get the job done up front and execute and not turn the ball over. When we have chances to score, if we get in that red zone and have opportunities to punch it in, we have to capitalize. We can’t leave points out there.”

In an epic match that lasted more than 70 minutes inside a packed, raucous Roanoke gym, Rustburg rallied late to defeat Hidden Valley 3-2 and advance to the Class 3 state finals, where it will try to defend its state championship from last season.

Brookville running back Tayshaun Butler runs between a pair of Patrick Henry defenders at Stinger Stadium. Butler has rushed for nearly 400 yards and scored 10 total touchdowns this season.