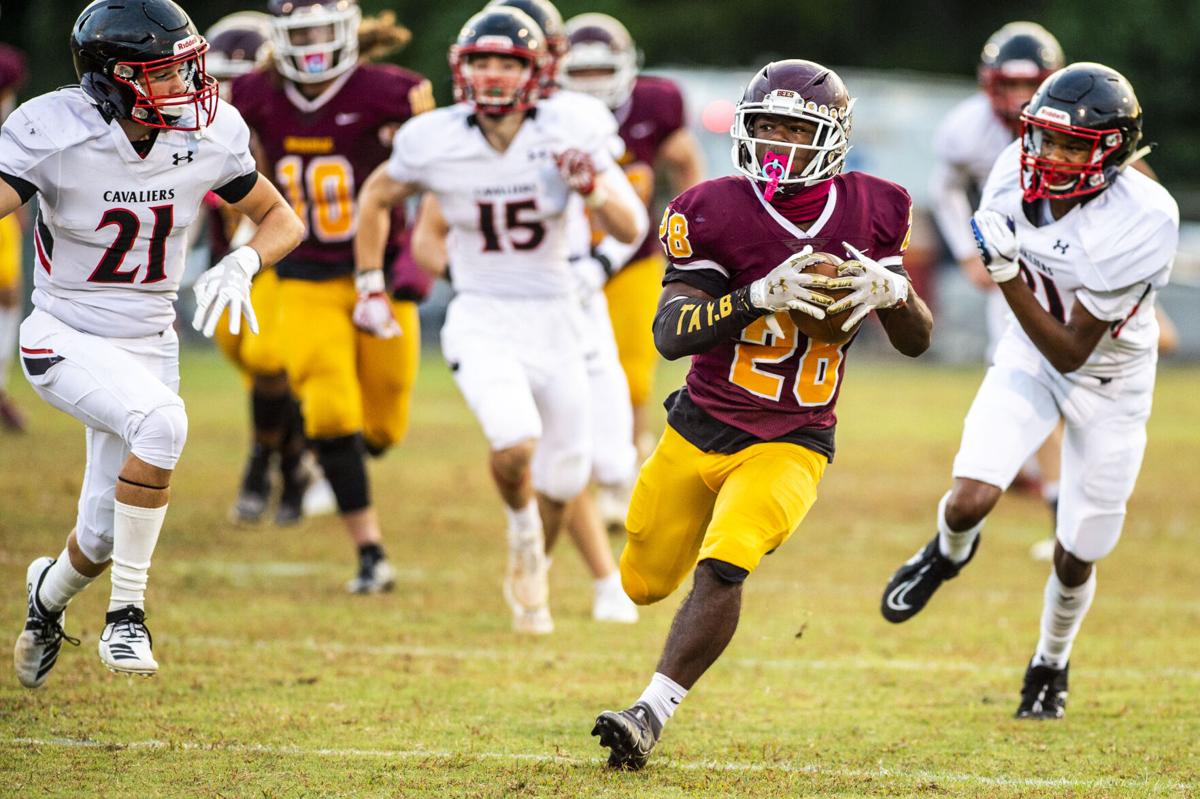 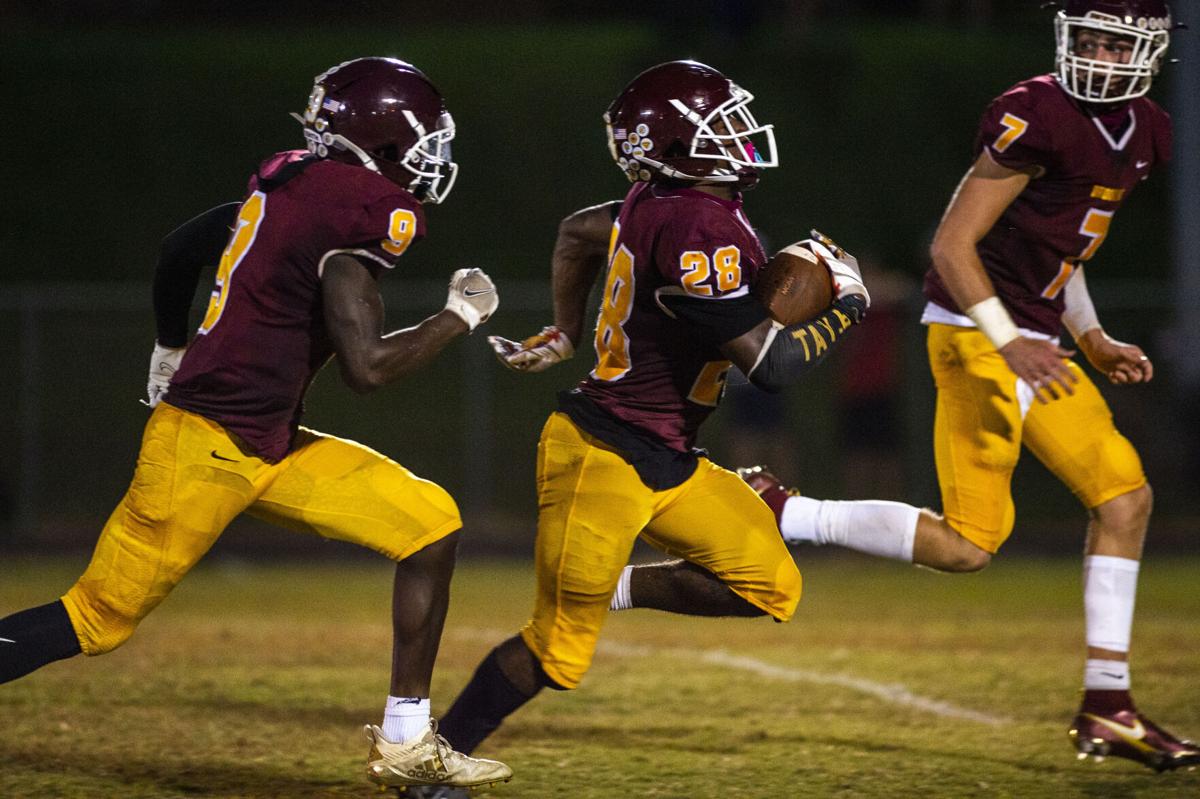 Brookville running back Tayshaun Butler is escorted to the end zone by teammates Stephen Preston (9) and Drake McDaniel (7) for a touchdown against Jefferson Forest at Stinger Stadium on Friday. 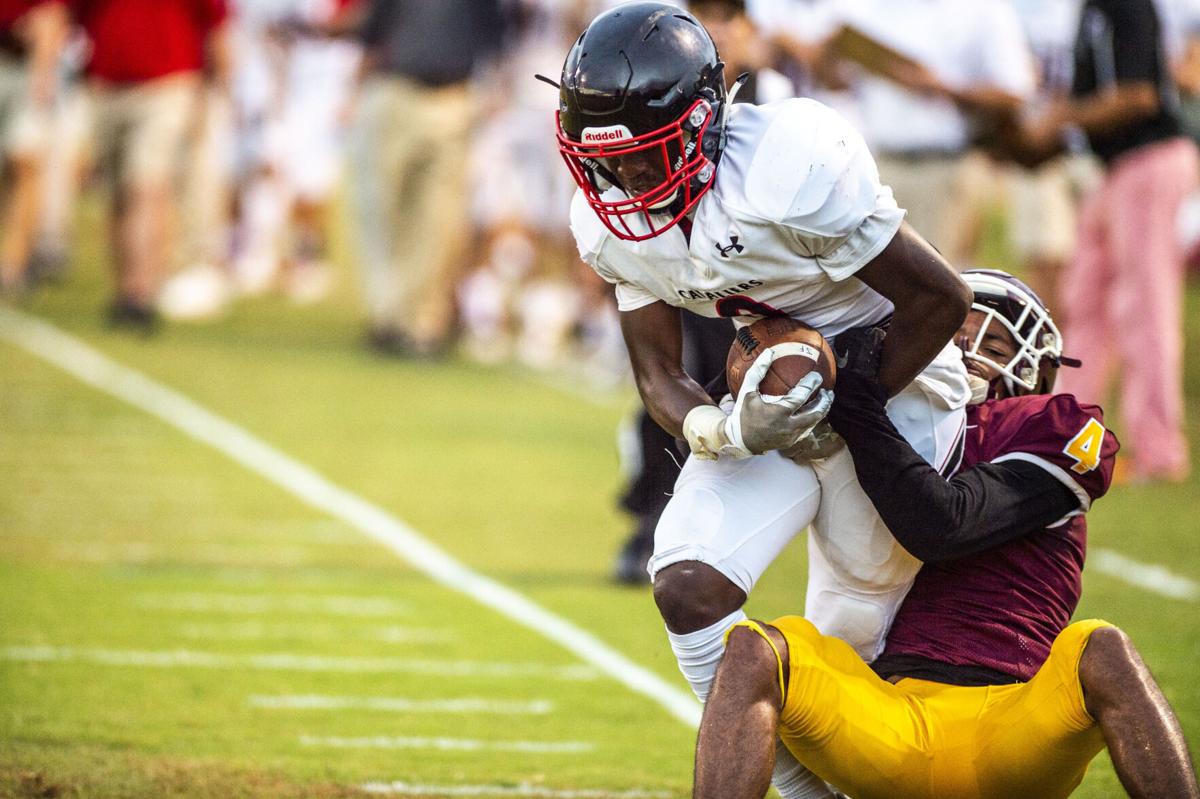 Brookville had gone 109 minutes this season without trailing. So when Jefferson Forest put together back-to-back scoring drives to take the lead Friday night at Stinger Stadium, the Bees realized they needed to clean things up in a hurry.

Tayshaun Butler answered the call first, and a litany of Brookville athletes followed with big plays that added up to an offensive onslaught Jefferson Forest couldn’t come close to stopping. The Bees piled up 55 unanswered points on their way to a dominating, 68-14 victory.

“We just played our ball,” sophomore lineman Micah Pennix said after his team improved to 3-0. The Bees, who set a school record for points in a game Friday, now have defeated opponents by an average of 41 points.

Butler was the driving force behind the Bees early. He piled up 138 yards on the ground in the first half, most of which came on touchdown runs. Twenty-seven seconds after JF sophomore QB Joe Bell found Brody Jackson for a 32-yard TD to put the Cavaliers (0-3) up 14-13, Butler responded with a 52-yard run down the right sideline.

“We came out thinking this game was gonna be a cake walk, and we ended up getting down,” Butler, a senior running back said. “We had to flip the switch, actually had to focus and get our head right so we can play like we know we can play.”

Credit the offensive line with opening up gaping holes for Butler and his teammates to run through. Less than minute after the score that gave Brookville the lead again — one the Bees never relinquished — Butler’s teammates came through again, helping him finish off his interception with another TD.

Butler’s 55-yard pick-six was his second of the season and gave BHS a 31-14 lead in the second quarter. The play marked his third score of the night. He finished with 139 yards rushing on eight carries and a 22-yard reception on a pass from QB Drake McDaniel.

The junior was impressive Friday, too, tossing four touchdowns and throwing for 175 yards. Ethan Robey pulled down three passes (41, 7 and 12 yards) from McDaniel, all of which went for touchdowns.

Robey’s TD grab was the final score of the third quarter and came on fourth-and-2.

“He’s a good receiver, good person to throw it to,” McDaniel said before spreading the love for the rest of his team. “We’ve just got athletes.”

McDaniel (10-of-13 passing) also found Stephen Preston for a 38-yard touchdown that closed the first half. By then, the Bees were up 37 points after tallying 418 yards of total offense.

“My 20th year coaching high school football, and you don’t always have weapons like I have right now. You just enjoy every minute of it. I’ve had years where you have to go 15, 20 plays perfect to have a chance to score,” Brookville coach Jon Meeks said. “… To have guys like this that are capable of scoring anytime they touch it, it’s just a blessing.”

BHS finished with 565 yards of total offense, including 384 on the ground. The Bees averaged first-down yardage on every carry (12.8 yards per tote).

Silas Rucker and Jaylyn Marshall both had a touchdown each and finished with 97 and 56 yards on the ground, respectively. McDaniel also rushed for 73 yards on five carries.

After the first quarter and JF’s first drive of the second quarter, on which the Cavaliers briefly took the lead, the BHS defense tightened up. Forest finished with 212 yards of total offense, most of which came from Bell.

The signal-caller had 133 yards on 9-of-15 passing with the one interception that proved costly. Jackson pulled down four passes for 102 yards, including the touchdown.

Alex Marsteller recorded JF’s first score on a 1-yard run and was the Cavaliers’ leading rusher. He had 85 yards on 12 carries, but JF only netted 79 yards on the ground, mostly because Brookville sacked Bell three times.

“This was just as much about us and our lack of ability to continue executing consistently,” JF coach J.T. Crews said. He was pleased with his team’s effort early, but the adversity the Cavs faced after Butler’s back-to-back touchdowns “knocked the wind out of our sails.”

Pennix and Steven Pauley had one sack apiece, while a few players were in on the final sack of the night. Pennix also had a couple tackles for a loss that blunted JF’s momentum.

“We were on a different level than them,” Pennix said.

Both teams had to quarantine last week and had short weeks of practice. They’re now into the gauntlet of the Seminole District. Up next for JF is Amherst, which won its first game this season Friday over Liberty.

Having made a statement with their offense, the Bees will face one of the Seminole’s top teams next week, when they travel to Liberty University’s Williams Stadium to take on Liberty Christian.

The Bees beat LCA to open the previous season but then were knocked out of the Region 3C playoffs by the Bulldogs.

“We’re gonna give them all we got,” Butler said.

Brookville overcame its first deficit of the season to pull away and defeat Jefferson Forest to open Seminole District play at Stinger Stadium.

Brookville running back Tayshaun Butler is escorted to the end zone by teammates Stephen Preston (9) and Drake McDaniel (7) for a touchdown against Jefferson Forest at Stinger Stadium on Friday.