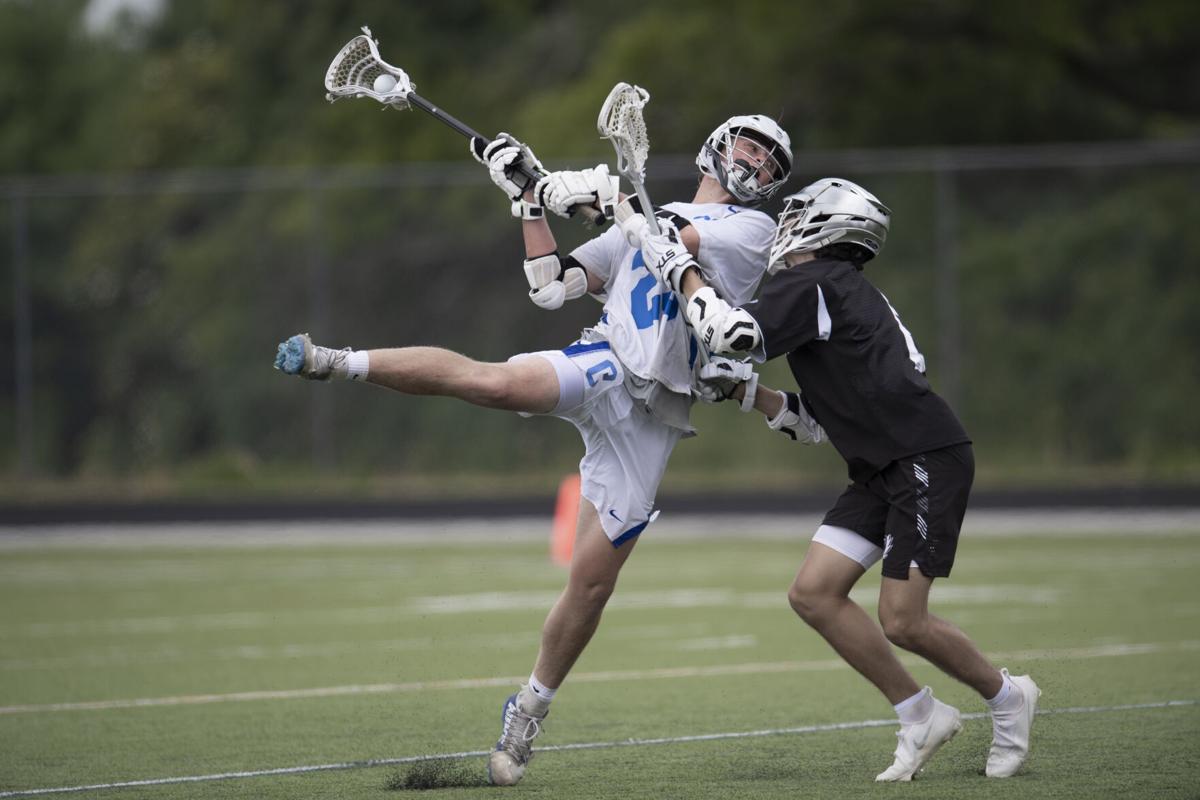 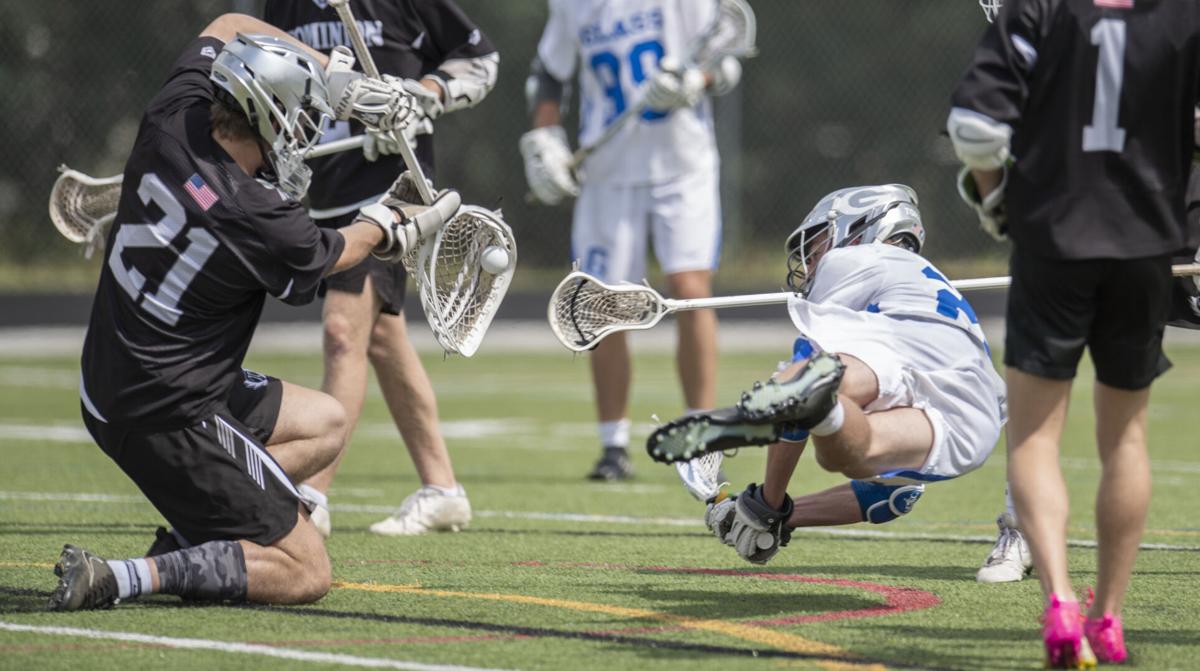 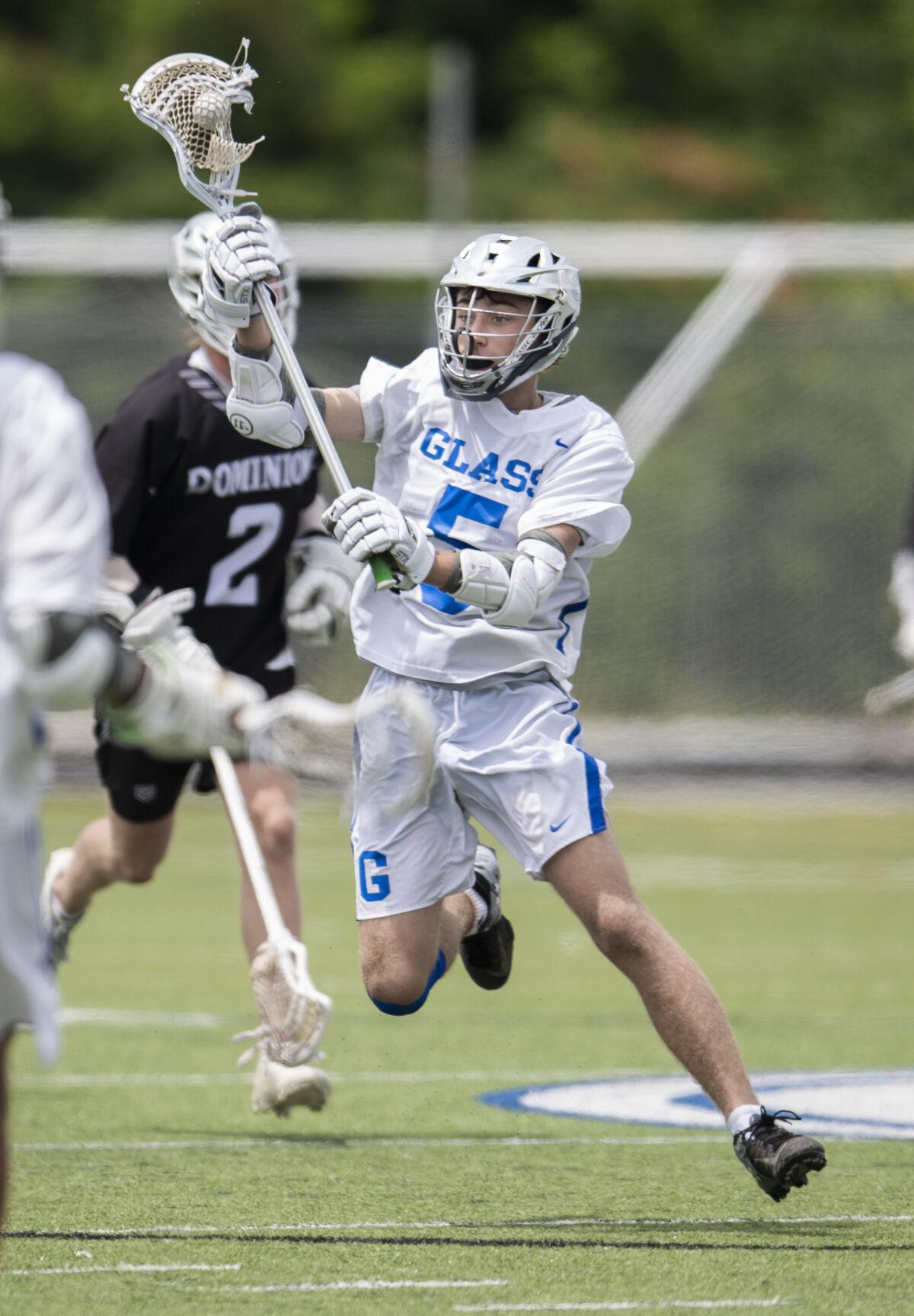 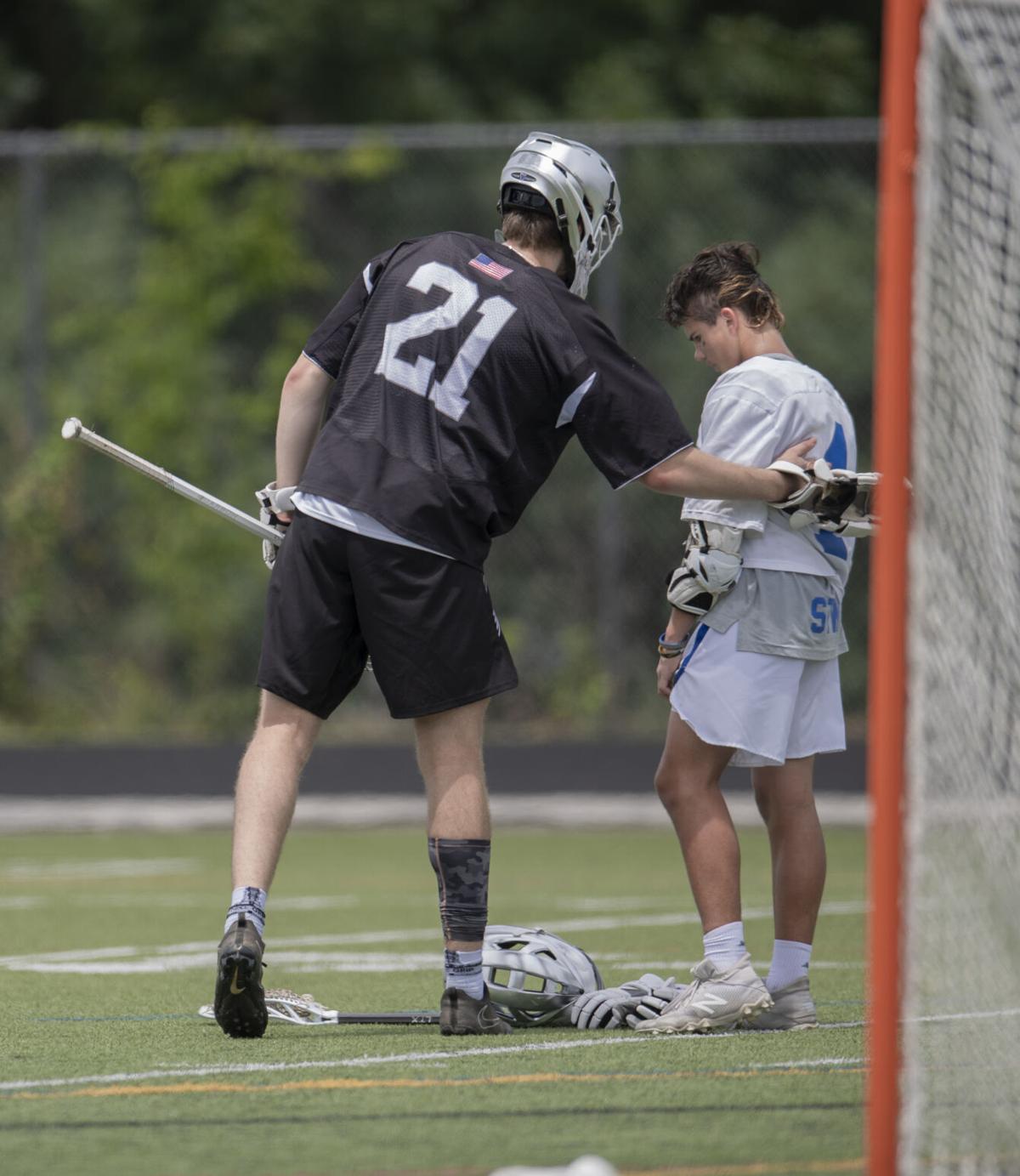 Glass' Neo Corsini gets knocked down while battling several Dominion players for a ground ball. 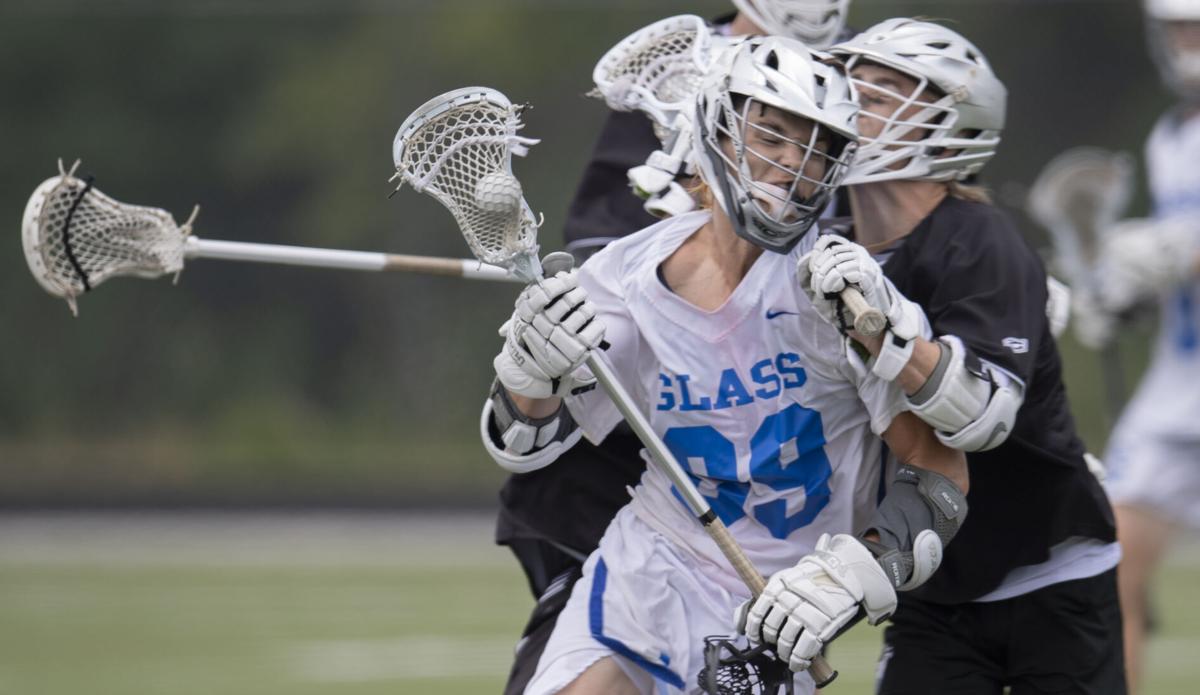 Glass midfielder Robert Wood takes a stick to the neck while driving to the goal during Saturday's Class 4 state championship game against Dominion. 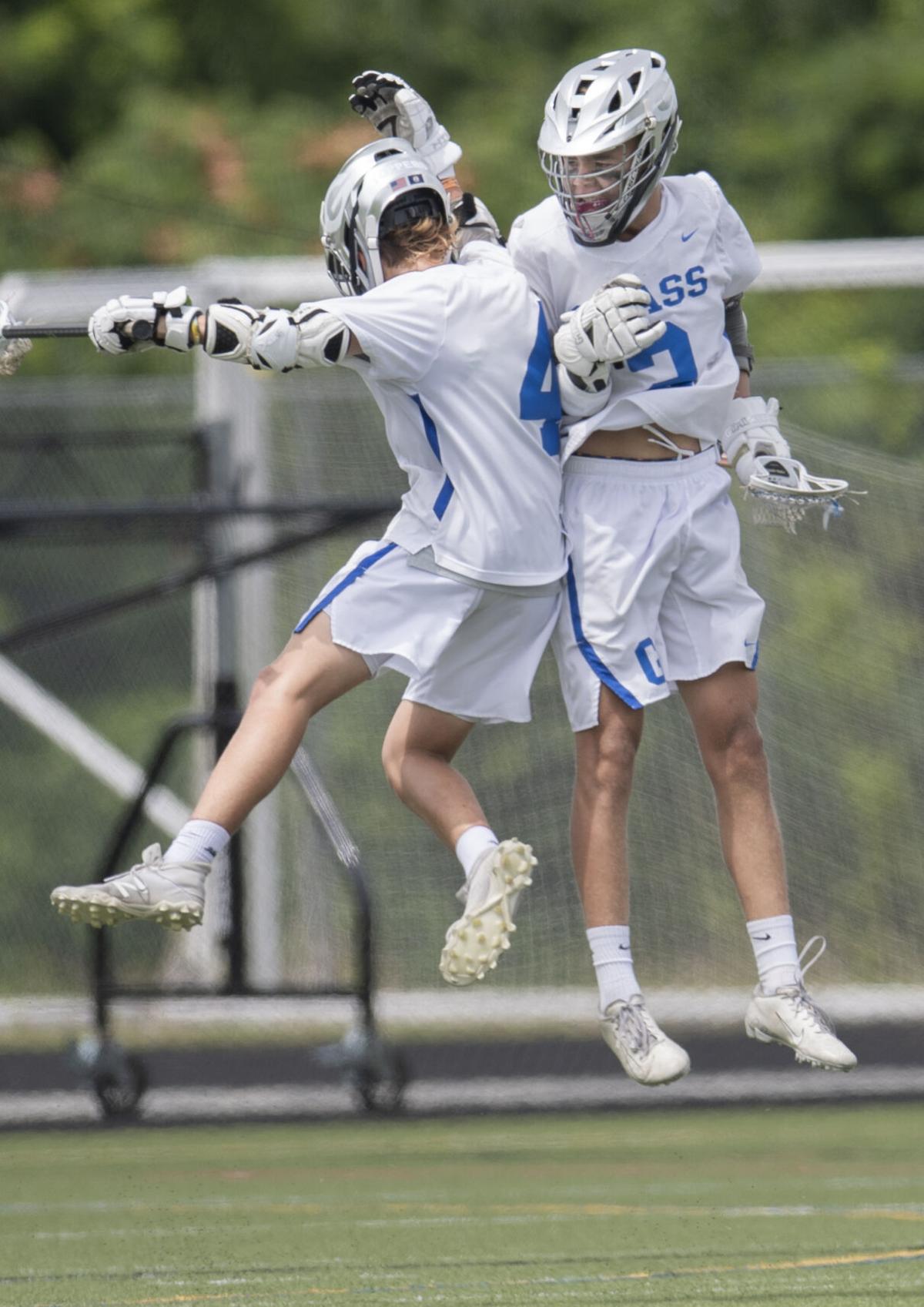 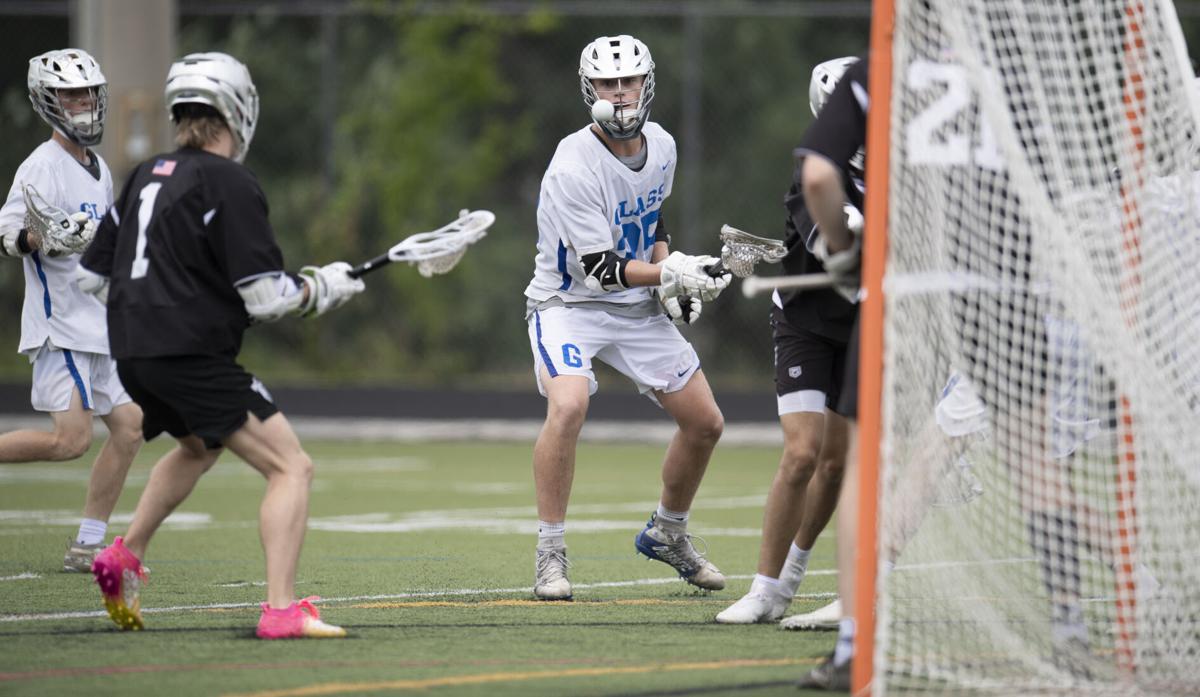 Glass' Penn Willman eyes for ball in front of the goal in the Hilltoppers' offensive half of the field during Saturday's Class 4 state championship game against Dominion. 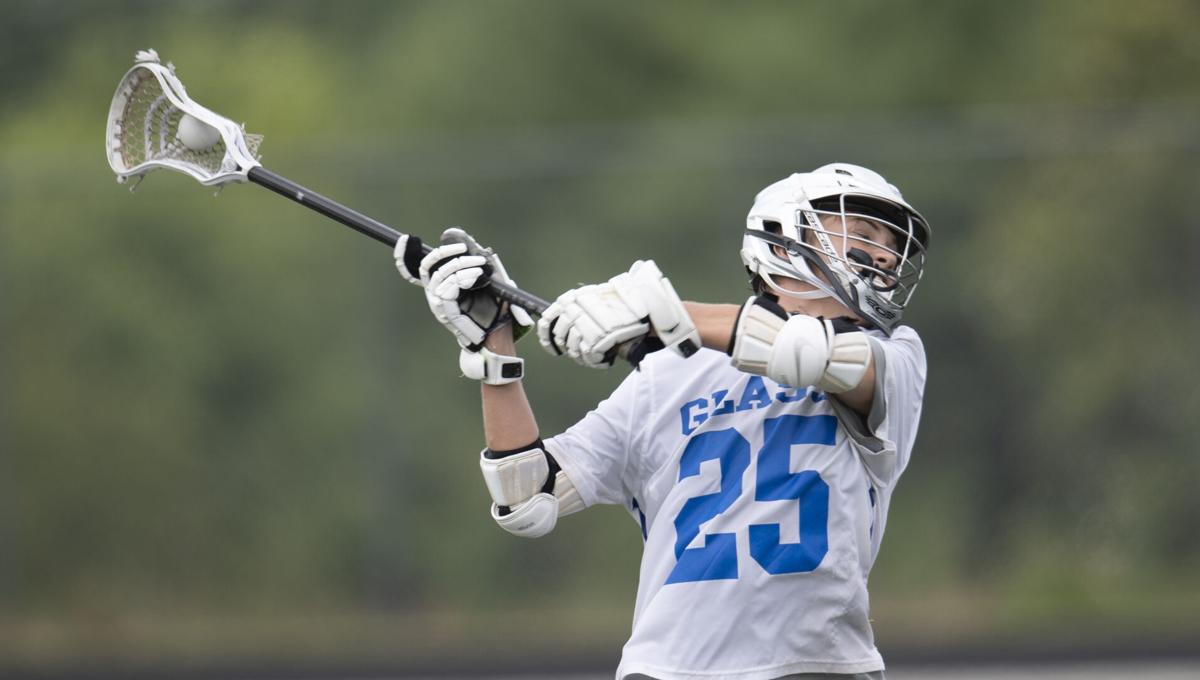 Glass’ Penn Willman winds up for a shot during Saturday's Class 4 state championship game against Dominion. 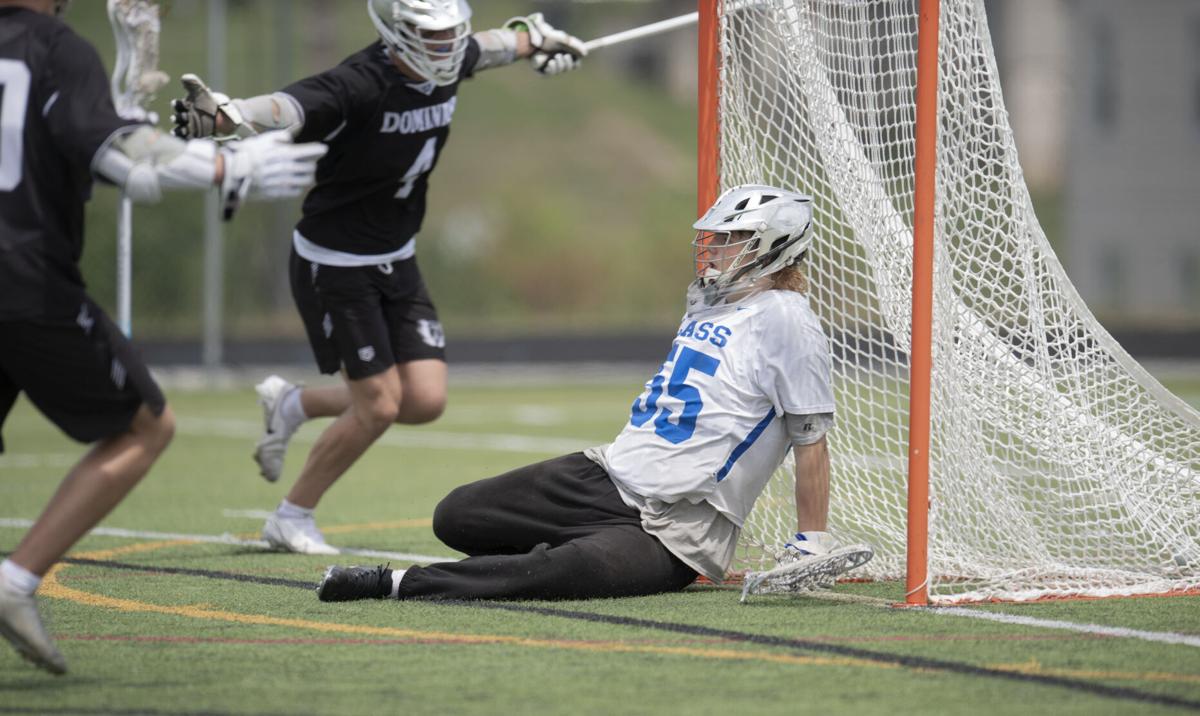 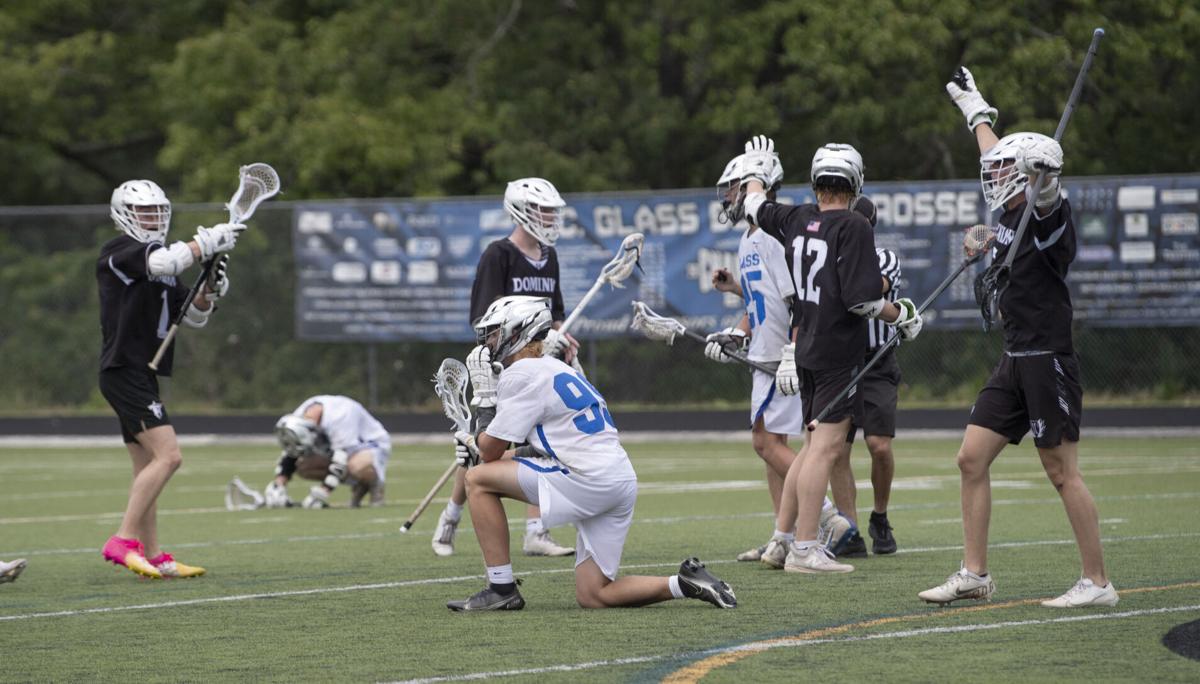 They almost did as they’d hoped. E.C. Glass nearly “shocked the world” — or, at the very least, those watching Saturday’s game at Vince Bradford Field.

The Hilltoppers, who once trailed visiting Dominion by six goals, made a furious comeback over the final 19 minutes. But Glass, despite a 7-2 run during the stretch, came up short in its fourth straight trip to the state championship game. Dominion, the team Glass beat three years ago for the title, got revenge and captured the Class 4 crown, 11-10.

“I think it just speaks to these guys, their character,” Glass senior Woody Carrington said of his team’s never-say-die mentality Saturday. The Hilltoppers (10-2) scored the game’s final three goals and pulled within one with just over a minute left, then got one more quality shot and another chance in front of the cage in the final seconds, but they couldn’t pull even to force extra time.

That Carrington’s team was able to bounce back after Dominion went on a 6-0 run spanning the second and third quarters, he added, was “evidence” of their “belief.”

Dominion (14-0), with a bevy of scorers, certainly could’ve made that lopsided score happen with the momentum it built via back-to-back scores in the second quarter.

After the teams traded goals early in the frame, the Titans stretched their lead to more than one goal for the first time Saturday with quick strikes after winning faceoffs. Henry Fleckner (team-high four goals) made it 4-3, then fellow sophomore Gavin Burke stretched the advantage to 5-3 with 4:35 left in the half.

The pair of scores jumpstarted an offensive blitzkrieg for the Titans, who went up 6-3 at the break and then 9-3 with three consecutive goals in the third quarter.

But that’s when Glass buckled down defensively and picked apart Dominion’s defense, with multiple players combining for goals.

Robert Sorenson, a 5-foot-6 freshman, was the man with the hot hand for the Hilltoppers. He notched a hat trick with goals at the 7:19, 5:39 and 2:45 marks of the third quarter, then capped the scoring with his team-high fourth goal with just over a minute left in the game.

Sorenson, who’s dreamed of playing for Glass and coach Eddie Ranuska, stepped onto the biggest stage of his young career with some nerves and was quiet for much of the first half, but he came alive in the second.

He received assists from senior Sammy Hamilton, Eli Wood and Carrington (twice) during his four-goal spurt.

“Obviously I was a little intimidated coming out [for the] state championship as a freshman,” Sorenson said. “So I’m just lucky my teammates found me in the right spot and I was able to finish.”

The Hilltoppers also got goals from Carrington and Caleb Hill during the second half, including one from Carrington off an inbounds pass as time expired on the third quarter, which cut the Dominion lead to 10-7.

The goal ignited the Glass faithful, who spurred the 'Toppers on to a 3-1 advantage in the final quarter, and roared louder still as the Hilltoppers put together a 3-0 run.

“We said we were gonna face adversity at some point, and it’s how you respond to it,” Ranuska said. “I think we responded really well.”

Hill chopped the deficit to three goals, 11-8, with a goal off a pass from Sorenson with 5:19 left, Carrington made it 11-9 with 3:47 to go, and Sorenson found the back of the net with just 77 seconds remaining.

Carrington won the ensuing faceoff, and Sorenson got off another shot in the final minute, but it sailed wide.

Glass also atoned for a turnover by forcing a Dominion turnover, and Carrington found himself with the ball not far from the cage. He attempted to make a pass toward the crease for one last shot, but it was partially blocked, and Dominion picked up the ball and launched it downfield.

Billy Koudelka, the E.C. Glass goalie, found the ball in the air on the other side and sent it back the other way, but time ran out.

“We knew we would stay together, and when we stay together, we know we’re gonna make a run eventually,” Carrington said. “We did that, but unfortunately we just ran out of time.”

Six players scored for Dominion, including Will Wajsgras and Carson Schubert with two apiece.

Schubert, a senior who was on the sideline the last time the Titans and ’Toppers met in the state title game, said he remembered the disappointment that accompanied that loss.

“We wanted to capitalize on that feeling. It was really that last motivational piece that struck us a win,” he said, also admitting Glass’ rally meant for some “extremely nerve-racking” moments for him and his team.

Asked about what kept the Hilltoppers in the game Saturday, Ranuska and his players pointed to their effort during Saturday’s high-stakes contest, played under sweltering conditions.

Carrington, one of two seniors, was the obvious example. He threw up on the sideline during the second quarter in what seemed to be a case of exhaustion, and athletic trainers kept ice on his neck and chest in the few moments he wasn’t on the field in an effort to keep him cool. Then, after a few seconds, he’d enter again to play both ways and take on faceoff duties.

“It’s rare to see somebody leave their heart on the field, and if you go on the field right now, you could probably find [his],” Ranuska said, “because he left everything he had on the field today.”

That was the case for the rest of the Glass roster, much smaller than in its previous state title game runs, too, Ranuska said.

Carrington leaves behind a Hilltoppers team, now with four straight state championship games under its belt, that is among the best in the state. “I think you couldn’t not call it a powerhouse," he said.

With Glass vowing immediately to get back to work quickly in the offseason, and with a long list of talented, young players in the program, Sorenson said lacrosse fans should continue keeping an eye on the Hilltoppers.

“I know we’ll be back in this position next spring,” he said. “I can promise you that.”

Glass' Neo Corsini gets knocked down while battling several Dominion players for a ground ball.

Glass midfielder Robert Wood takes a stick to the neck while driving to the goal during Saturday's Class 4 state championship game against Dominion.

Glass' Penn Willman eyes for ball in front of the goal in the Hilltoppers' offensive half of the field during Saturday's Class 4 state championship game against Dominion.

Glass’ Penn Willman winds up for a shot during Saturday's Class 4 state championship game against Dominion.