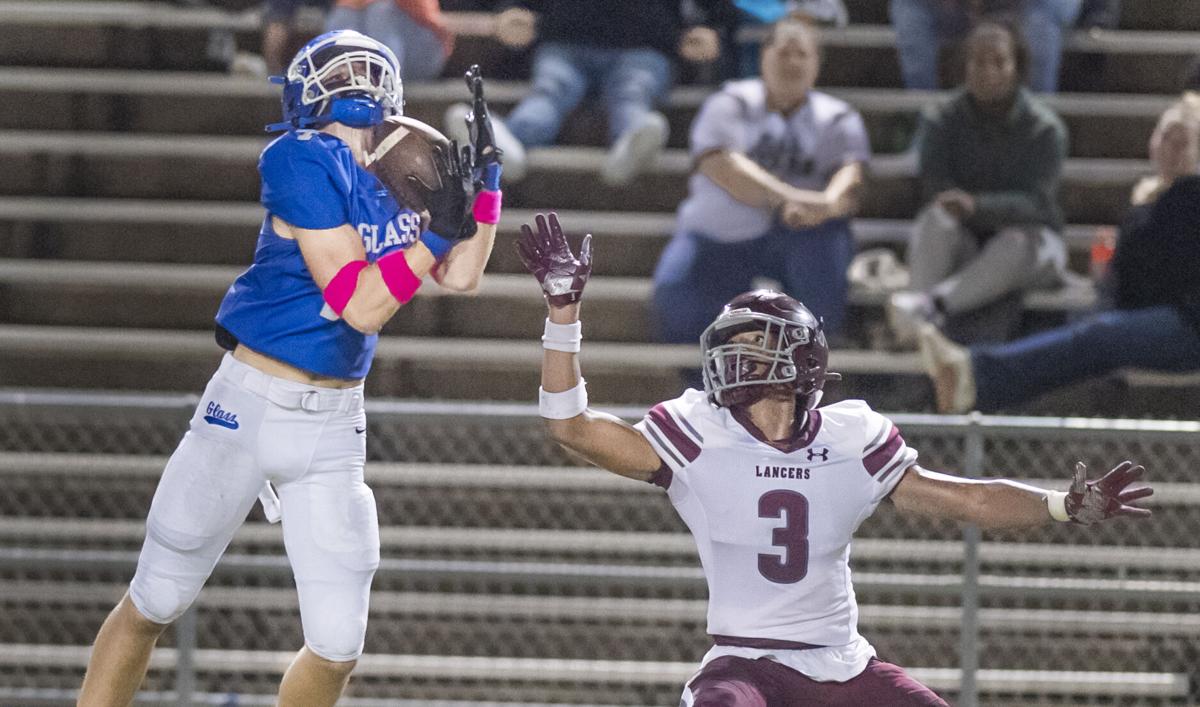 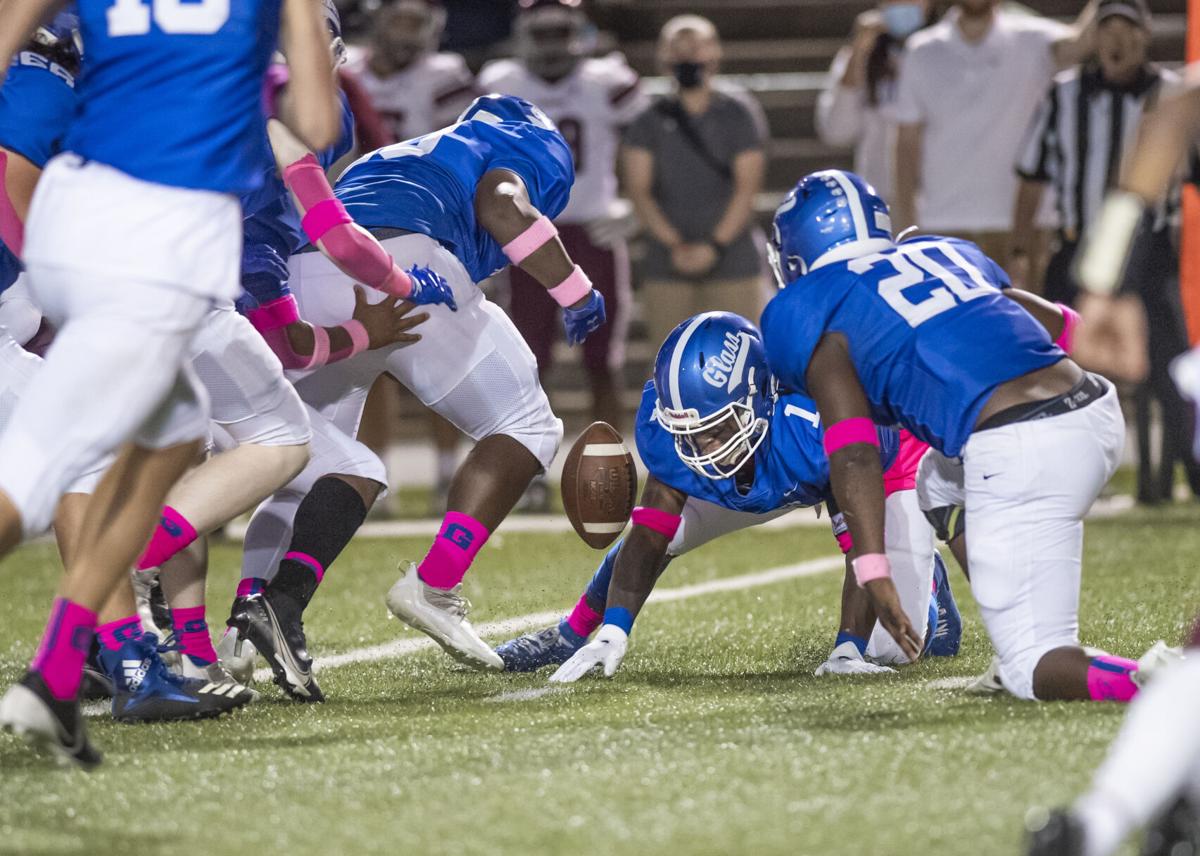 The E.C. Glass defense forced six Amherst fumbles during the course of the Hilltoppers’ 44-6 victory Friday night at City Stadium. 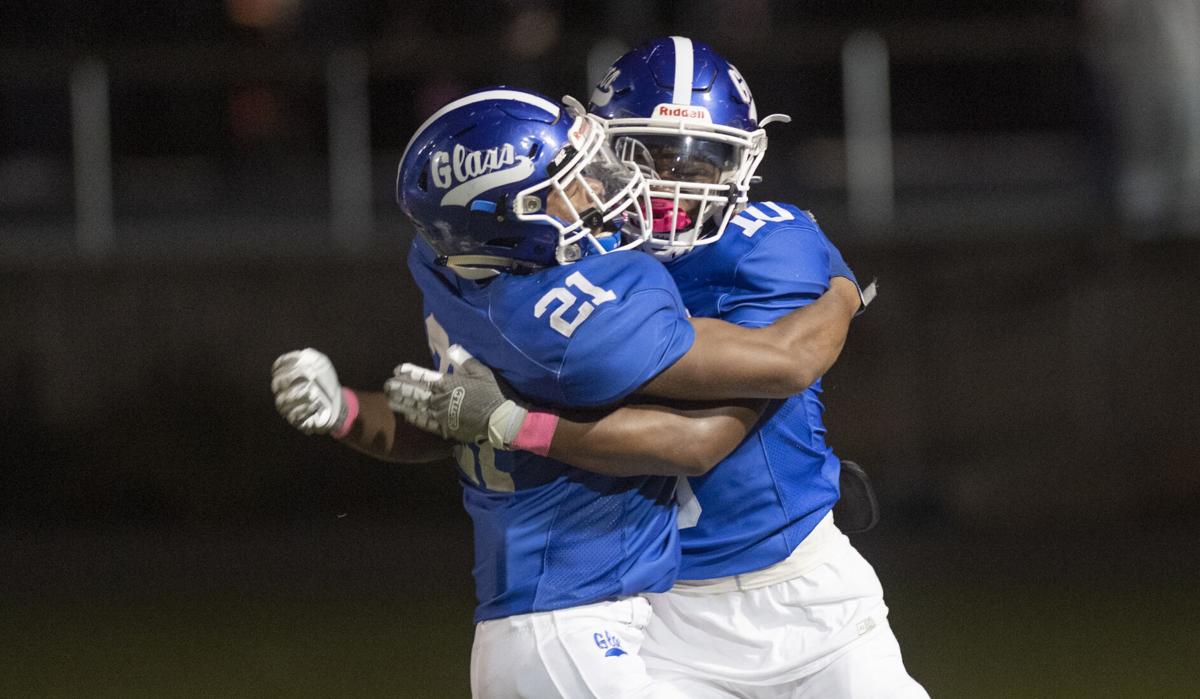 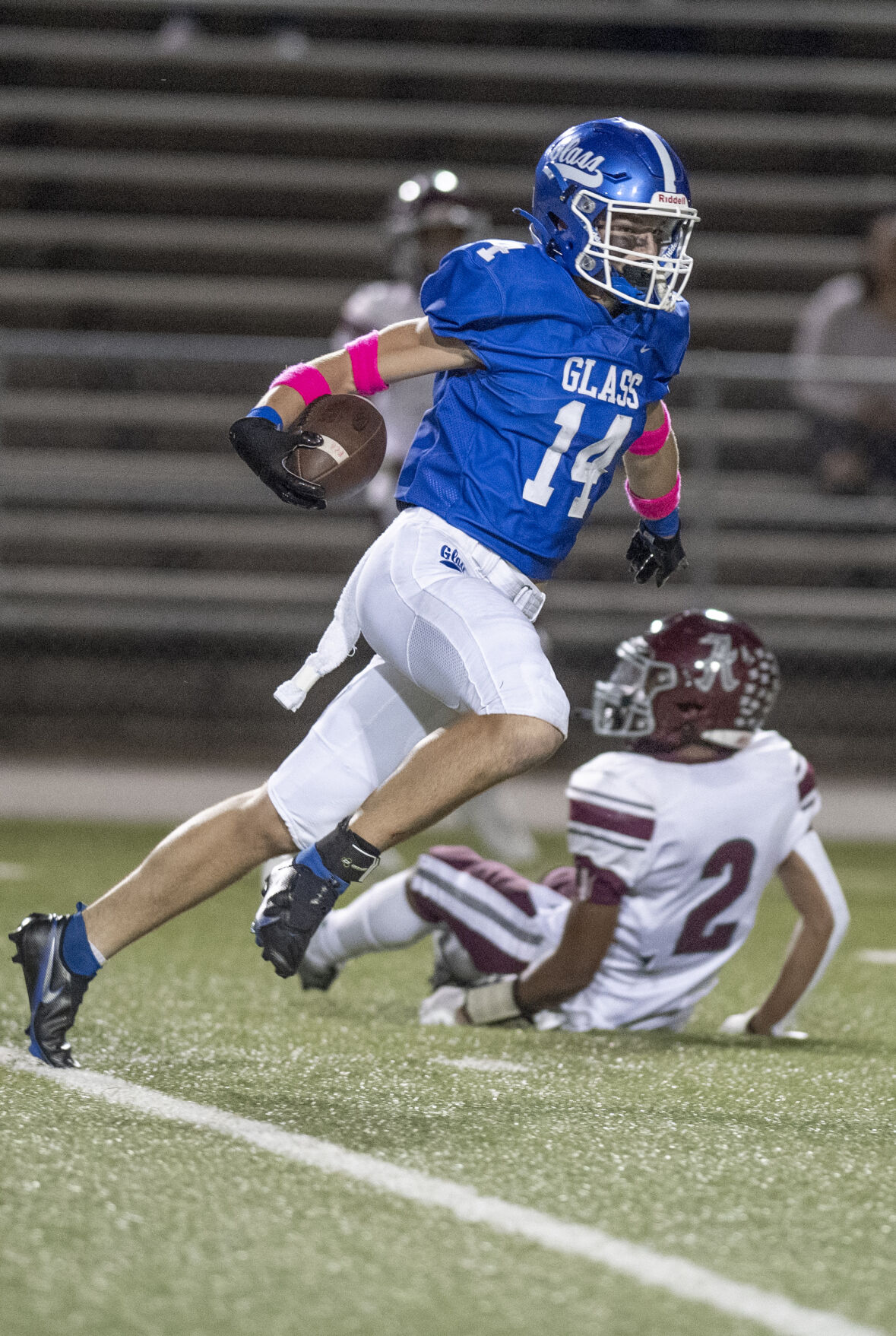 For one quarter, and one drive in particular, things were going well for Amherst. The Lancers’ first possession resulted in an early lead, and their defense got to E.C. Glass players in the backfield.

Then it all came crashing down.

A series of turnovers by ACHS handed the Hilltoppers the ball inside the Amherst 30-yard line three times, and E.C. Glass seized momentum and never let go. The ’Toppers climbed out of the first-quarter hole, shook off rust after their bye week and piled on the points in a 44-6 triumph at City Stadium on Friday.

In the opening stages, Amherst (3-2), after going ahead 6-0 on a 25-yard pass from Tyleik Brown to Lawrence Brown, had Glass’ number. The Hilltoppers went three-and-out on their first possession, with players coming off the field after third down telling coaches the Lancers had yelled out exactly the play Glass planned to run. George White was brought down behind the line of scrimmage on that play, and took hits frequently in the first frame.

It took the Hilltoppers (5-1) more than 12 minutes to solve Amherst’s defensive scheme, and even then, they had to settle for a field goal.

But after that, Glass’ defense took over — with plenty of help from Amherst — and the offensive machine that features multiple weapons started humming.

“My line did a wonderful job blocking, and after that, it was up to me,” Mosby said.

The Lancers’ next possession didn’t go much better, and ended in a second costly fumble. ACHS finished with six of those, losing two of them. And although Amherst recovered one other fumble on a punt attempt, the loss of 17 yards again set Glass up inside the red zone.

Mike Thomas capitalized for a 10-yard TD run as a result.

“We started off playing really well,” Amherst coach Bob Christmas said, “and those turnovers were just critical. You just don’t overcome something like that. The odds of overcoming that are really slim.

The Amherst coach credited Glass, too, saying it “got better as the game went on,” evidence of which also came in the form of a 58-yard TD pass from White to his favorite target.

White unleashed a bomb to the left side of the field, where Eli Wood hauled in the catch not far from the end zone, then beat two defenders as he cut back to the right and in for the score.

White couldn’t believe his luck after the play, which was sandwiched by the short drives ending in Mosby and Thomas’ touchdowns. “Why don’t they double cover him?” he asked no one in particular on the sideline. Left in single coverage, Wood, the area’s leading receiver, once again proved tough to stop.

The Hilltoppers went into halftime with a 23-6 lead, added a 17-yard touchdown run from Lyvarius Gilbert in the third quarter and scored twice more in the fourth.

Thomas was the first to find the end zone in the fourth, tallying his second TD run on a 3-yard scamper.

“I’m happy with it,” Thomas said of his performance, adding the Hilltoppers left the stadium with the satisfaction of knowing they “picked it up, kept our heads high” and “started getting in a groove” in the second quarter.

Q Foster capped the scoring and the 44-0 run with a 7-yard rushing score with 2:46 left in the game. Glass bled nearly seven minutes off the clock on its final drive, which featured heavy doses of Mosby and Foster.

Mosby, Foster and Thomas spearheaded the Hilltoppers’ ground game with 58, 44 and 67 yards, respectively. Marty Kittrell was second among Glass receivers with 36 yards on two catches behind Wood, who had three receptions for 91 yards.

White put up 100-plus yards through the air and had the one TD pass to Wood. He finished 7-of-15 passing with two interceptions (though Amherst couldn’t capitalize on either) and 137 yards.

“We spreading the love,” Mosby said of Glass’ litany of weapons, on full display Friday.

Glass tallied 353 yards of total offense, about 200 of which came in the second half. It didn’t hold the ball for long or have to engineer long drives in the first because of Amherst’s turnover troubles.

ACHS finished with just 124 yards of total offense. The Lancers gained 76 yards on their first drive and had a few other long runs, but their net offense suffered because of a few sacks and the fumbled punt attempt.

Vincent Sweeney led Amherst with 48 rushing yards on six carries, and Isaiah Idore had two catches for 32 yards. Tyleik Brown and Tyreek Belcher combined on 7-of-10 passing for 79 yards (Brown had 65 of those).

“Just because you can’t be out there physically,” Jamari’s dad, Marty Hubbard, said of the message he’s given his son over the years, “doesn’t mean you can’t be part of the game.”

Rice settled on Chapel Hill, North Carolina, as his next stop, choosing the Tar Heels over the University of Virginia, Notre Dame, Alabama and Ohio State.

It was a fitting title, because the senior running back laid down the law, helping Brookville defend Stinger Stadium by fighting off visiting Amherst 36-21 in a clash between two Seminole District foes.

Tayshaun Butler was explosive last week, putting up more rushing yards in a single game than any other area running back this season. The 5-fo…

“I think they’re really motivated,” E.C. Glass coach Willie Wilson said of his team, which aims to earn some momentum in their last few games of the regular season — which include a marquee matchup with Rustburg at 7 p.m. Thursday.

A recap of the day's high school sporting events.

The E.C. Glass defense forced six Amherst fumbles during the course of the Hilltoppers’ 44-6 victory Friday night at City Stadium.