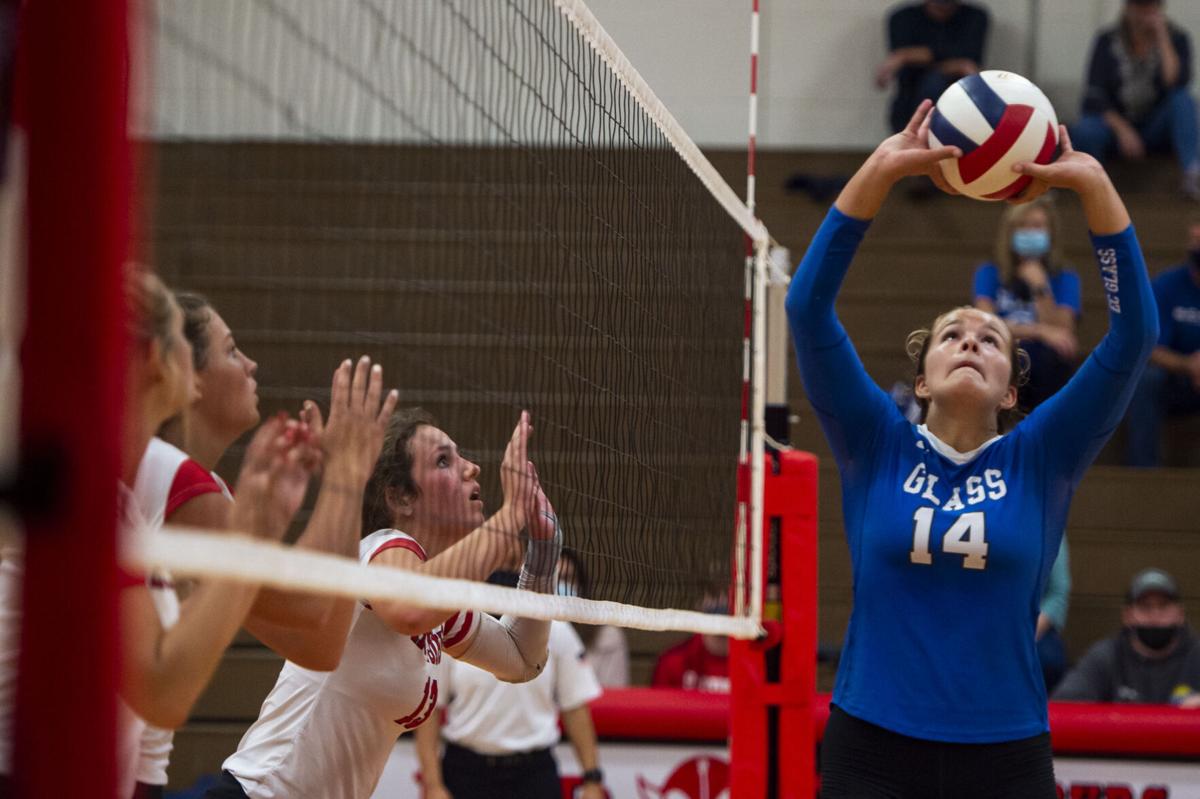 E.C. Glass senior Erin Johnson sets during a game against the Red Devils in Rustburg on Sept. 21. 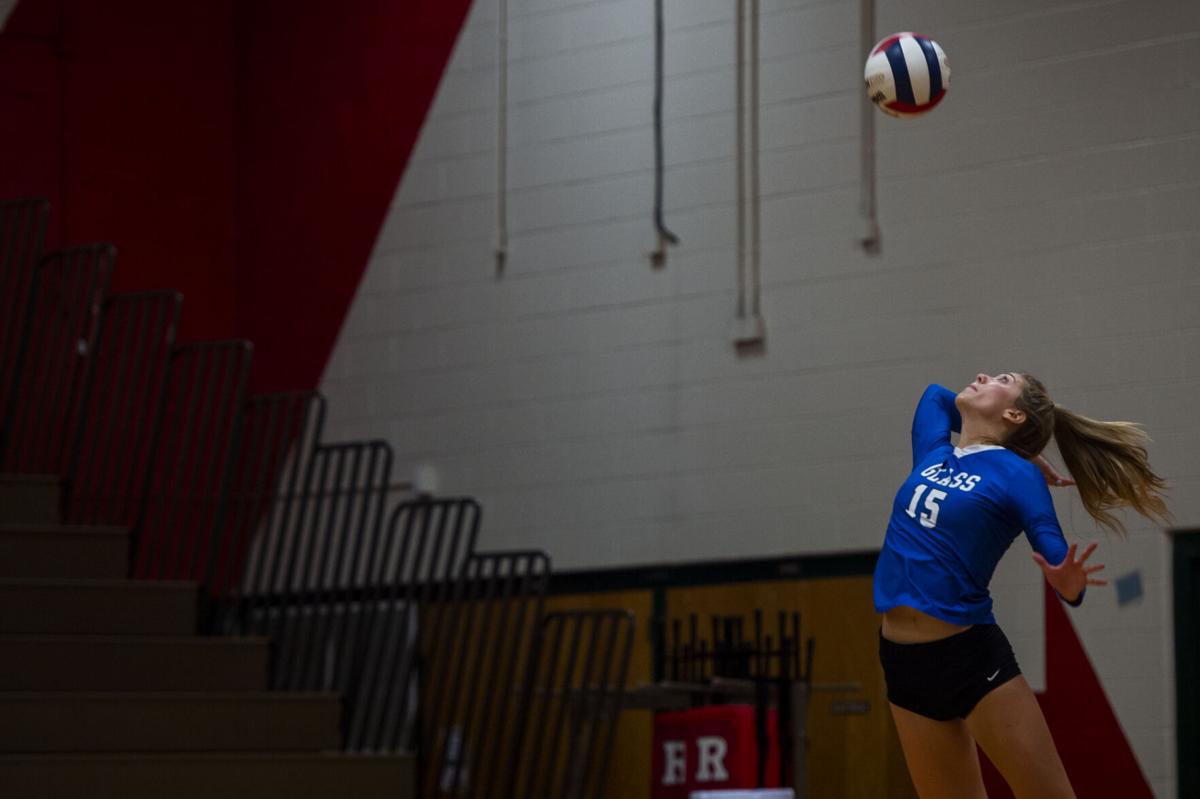 E.C. Glass senior VB Trost serves during a game against the Red Devils in Rustburg on Sept. 21.

Inside McCue Gymnasium on Tuesday evening, the E.C. Glass volleyball team was in uncomfortable territory.

The Hilltoppers, who entered that night’s meeting with Jefferson Forest not having lost more than one set at home all season, lost back-to-back sets to the Cavaliers after winning the first with ease. Before things turned around, Glass coach Willie Wilson asked his team a simple question: Do you want this game? When the responded with a “yes,” he challenged them again: “You’re gonna have to prove it to me.”

Wilson saw his team respond the way he hoped they would. The ’Toppers (15-4, 9-1 Seminole District) won the match, their comeback the latest display of their mettle.

The group saw it could overcome adversity that night. This season has provided players that same opportunity — to see what they’re made of mentally as well as physically — other times, too.

Those tests started in the offseason, which was shortened because the pandemic forced the previous season to be played in the spring. In the few months before the current campaign started up, Glass had to bounce back quickly from a crushing loss in the Region 4D championship.

Wilson said his squad felt somewhat “cheated” out of a chance to advance to the state tournament, with region runners-up not able to qualify because the field was narrowed.

That disappointing end, though, catapulted Glass. The Hilltoppers put together five straight wins to open the current season.

“I think they’re really motivated,” Wilson said of his team’s mindset both at the beginning of the season and now. The Hilltoppers, he explained, have flipped a negative into a positive as they strive to earn some momentum in their last few games of the regular season — which include a marquee matchup with Rustburg at 7 p.m. Thursday.

Other tests came, of course, in the additional effects of the pandemic. For Glass and other area teams, schedule changes piled up. And, in recent days, the Hilltoppers were hit with potentially needing to alter plans because of their own COVID-19 issues.

Glass will be without one player Thursday because of COVID, and more were at risk of having to sit out because of contact tracing; but vaccination status for those individuals staved off the need for postponement or cancellation.

Still, Wilson admitted, “we’re hurting a little bit without a little depth.” In addition to the player out because of COVID, another, junior middle blocker Nellie Fitzgerald, is out with an injury.

Fitzgerald — who might be back for postseason play, Wilson said — brings energy, vocal leadership and an important presence at the net (she’s tallied 62 kills and 15 blocks). The ’Toppers aim to make up for that with Mary Elizabeth Kennedy, a sophomore.

Senior outside hitter VB Trost and teammates say their trust in Kennedy and among all six players on the court has helped them pass the other tests they’ve endured.

After their first loss of the season — a thriller of a five-set match with Rustburg back on Sept. 21 in Rustburg — Glass responded by reeling off four straight wins. They followed a loss against Timberlake Christian with three straight wins, including the five-set triumph over JF, as well.

Now, they face what likely will be their most demanding of tasks left in the regular season Thursday, in the rematch with the Red Devils (17-1, 11-0).

Talk of this one has circulated the hallways at the midtown school, the senior said, so she expects plenty of support for the Blue Out Night at McCue, where the Seminole District regular-season title is at stake.

“I think the whole entire school is ready,” Trost said. “Everyone I’ve talked to says, ‘This is what we’ve been waiting for the whole season.’”

Rustburg will put its perfect district record on the line Thursday, when another “on-the-edge-of-your-seat” clash is likely to ensue.

Glass is the only team so far to take Rustburg to five sets. And the Hilltoppers, who had a 2-1 advantage and pulverized the Red Devils in the third set to take the lead on Sept. 21, are looking for revenge after letting the win slip through their fingers.

To avenge the loss and take down the team occupying the top spot in the Seminole, Glass again will need to stay mentally engaged, Trost explained.

Players can’t get too comfortable with a lead, because volleyball is “such a game of momentum,” she said, and they can’t panic in tight situations, either.

“Staying focused, calm, and knowing that we’re [playing each game] because we love [the sport]” are the keys for Glass, Trost added.

That starts with a solid pass in serve receive that puts setters Erin Johnson and and Devan Funke in the best position to create opportunities for Trost, middle hitter Lydia Ashcroft and outside hitter Ashley Dietz, who moved to the position this year after playing middle for the previous two seasons.

Look for the three to “take more risk” at the net to put away points early and take away the possibility of giving Rustburg easy balls it can then turn into its own offense.

“That won’t work,” Trost said, because RHS is “a really great team.”

A look at the day's high school athletic events.

E.C. Glass senior Erin Johnson sets during a game against the Red Devils in Rustburg on Sept. 21.

E.C. Glass senior VB Trost serves during a game against the Red Devils in Rustburg on Sept. 21.