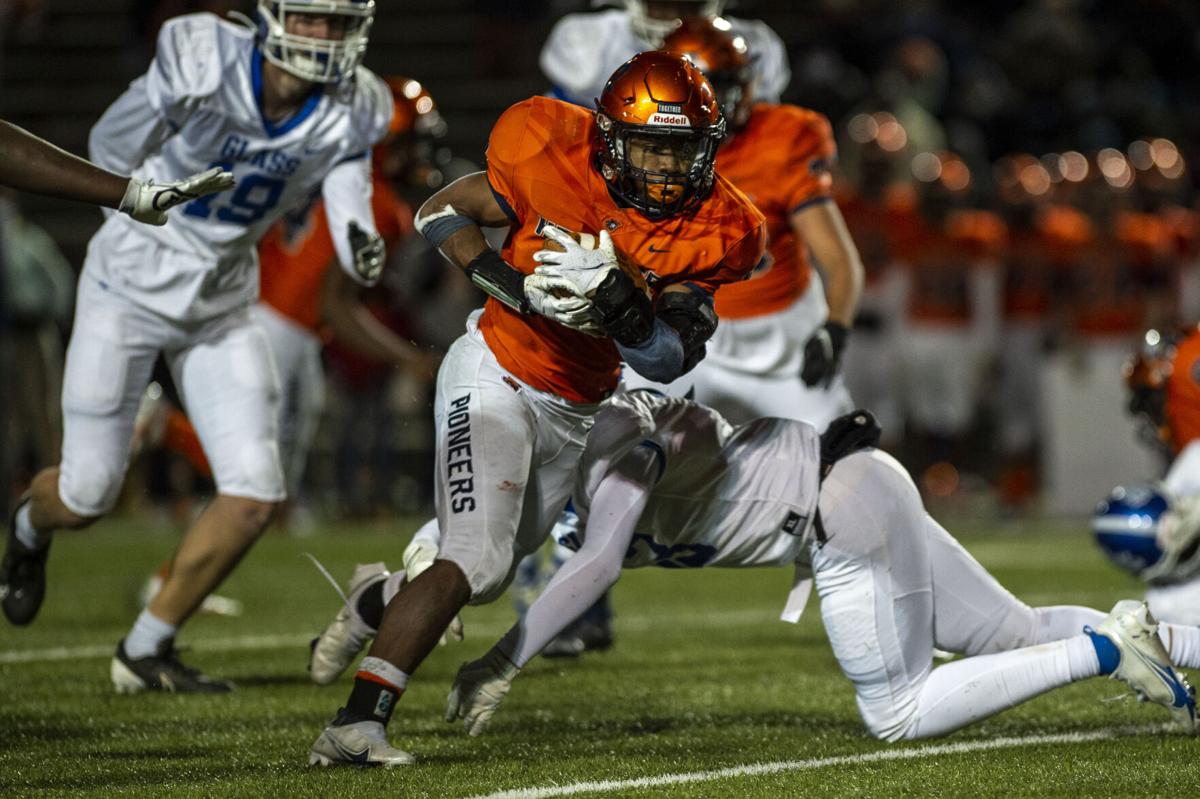 Heritage running back Zach Steele runs the ball during a game against E.C. Glass at Lynchburg City Stadium on Friday. Steele rushed for 189 yards and scored two touchdowns. 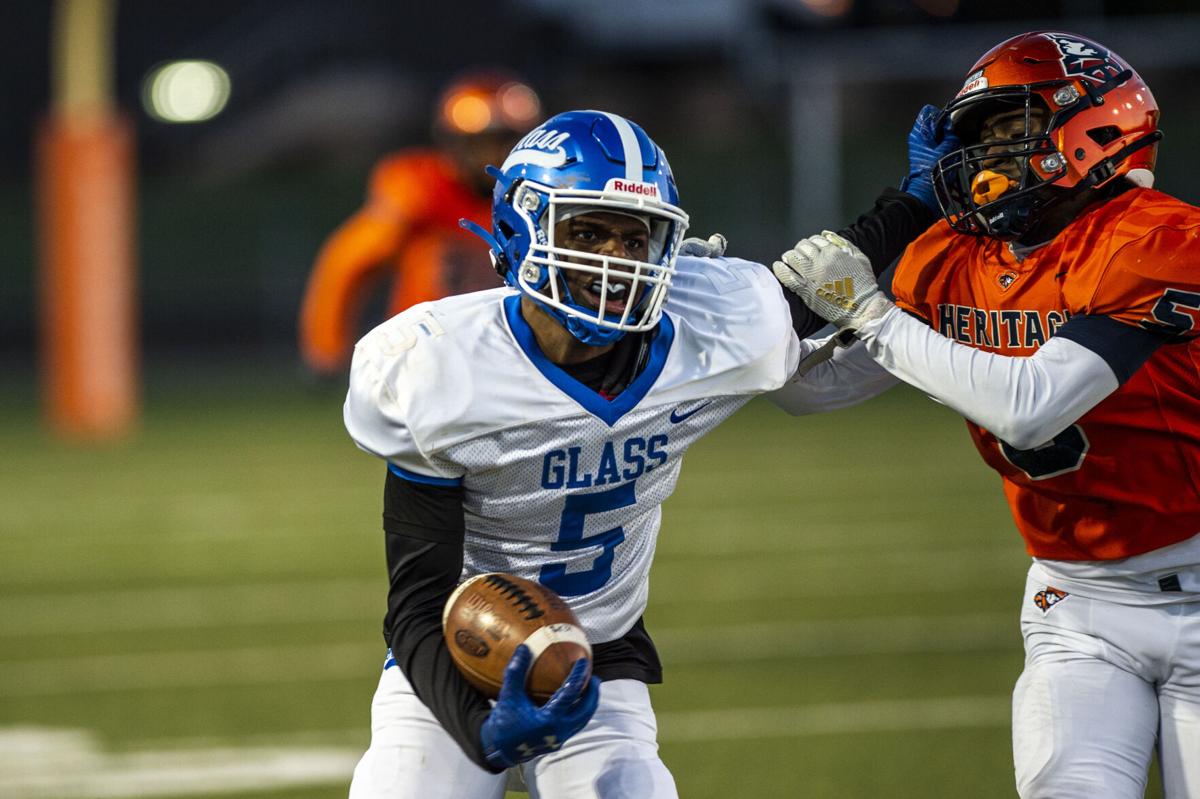 Punch number one came courtesy of Rajan Booker, who rumbled upfield for a 71-yard touchdown. Punch number two was Zach Steele, who put up massive numbers on the City Stadium turf.

Together, both sophomores delivered the knockout. Heritage put up 314 rushing yards against E.C. Glass on Friday night, and Steele and Booker combined for 312. Their work, which both attributed to their offensive line, helped Heritage earn the Jug Bowl victory over their crosstown rivals, 31-7, and earn a spot in next week's regional semifinals.

"We've got two more years of this," Booker said after scoring two touchdowns and finishing with 122 yards on the ground. "We're just showing what we've got, putting our name out there, letting people know that we are a big deal and we're gonna continue to put in work."

The Pioneers entered needing a victory to advance to the playoffs. Now they will likely travel to Lexington to face Rockbridge (6-0) next week.

"I thought defensively we played lights out in the first half. Really the whole game," Bradley said. " … It's just a hard-fought game. When you come out here to play a Jug Bowl, first of all I think its one of the best rivalries in Virginia, but you're gonna get everything you can from both teams."

Glass (1-3), already knocked out of the playoff hunt, didn't make this one easy on its rivals. Things were scoreless after the first quarter as the Pioneers racked up penalties, fumbled a snap and dealt with a Glass defense that has greatly improved throughout this pandemic-altered season, despite all the struggles in midtown.

The Hilltoppers had just one rushing yard on the game, though. Quarterback George White was 12 of 19 with 105 passing yards. The 6-foot sophomore tossed a 6-yard touchdown pass to LaVarius Gilbert with 1:47 left in the fourth quarter.

Markevus Graves, a junior used on offense at running back and receiver to go along with his work at defensive back, exited with an ankle injury in the first quarter after taking just one handoff and running it four yards.

Heritage had to settle for a field goal for its first score midway through the second frame, a 33-yarder from Karson Adcock. Booker broke away for his long TD run on Heritage's next possession, and the Pioneers took advantage of a Glass error just before halftime for a 17-0 lead. At the 1:26 mark, Glass botched a punt when the snap sailed high over Tyler Garrett's head. A pile of players batted the ball around for several seconds before Heritage finally recovered. Steele scored on a 20-yard run on the ensuing play.

"You've gotta think, this would only be our third week of work," Glass senior tight end and defensive end Nasir Williams said, referencing his team's two-week COVID-19 pause taken after Week 1 because of contact tracing. "This is really when you come together as a team. Tonight was us coming together as a team, finally, and us learning everything. We were comfortable. It is what is is. This season is shortened. I enjoyed my last 48 minutes of it, win or loss."

Steele gave HHS a 24-0 lead with a 5-yard punch late in the third quarter and Booker added his second score on a 3-yard scamper midway through the fourth.

"It's very special," Steele said of the duo's work. "A lot of new things to come in the future."

"The game pretty much just means everything to me," he said. "We haven't had too much of a season because of COVID, but it just hit me in the heart. So I had to go all in, all gas."

Glass coach Jeff Woody said his young squad in on the verge of exiting "the mistake phase." The Hilltoppers were bothered by turnovers and missed assignments this season.

"It's time to start making other teams make mistakes," he said. "That's what Heritage has got on us right now. They forced us to make those mistakes. … We had guys on both sides of the ball that will be playing on Monday [in a JV game] who had to step up."

Heritage finished with 375 yards of total offense after getting 61 passing yards from quarterback Kameron Burns. Now its on to the playoffs. Heritage's region also includes Rockbridge, Brookville and LCA. Win in Lexington and HHS could get its chance for revenge against Brookville or play the Bulldogs for the first time this season.

Photos: E.C. Glass and Heritage square off in Jug Bowl

Heritage running back Zach Steele runs the ball during a game against E.C. Glass at Lynchburg City Stadium on Friday. Steele rushed for 189 yards and scored two touchdowns.