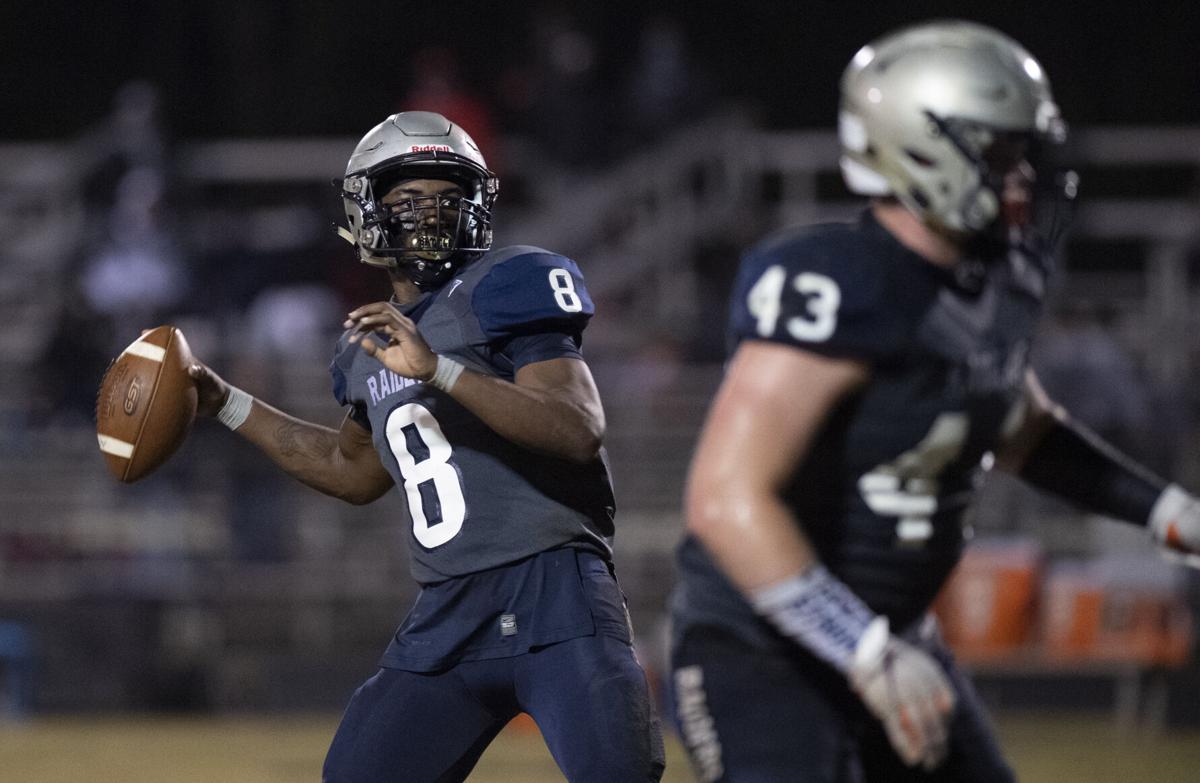 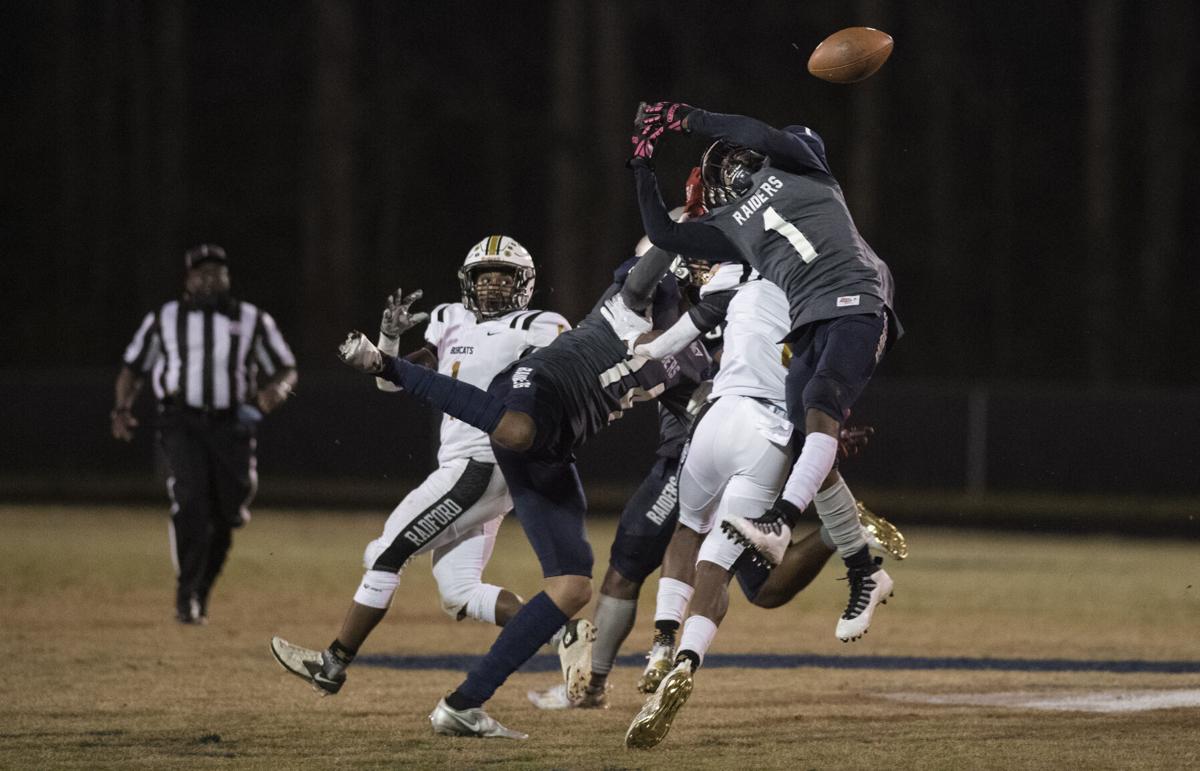 Leaders like Tre Lawing, Keyshawn Baker and Tez Booker have continued to deliver in their roles this season. Players like Ervis Davin and Jonathan Pennix have responded to the calls to take on more responsibility. And Stephen Castello — with Doug Smith, the man he’s worked under for years, not physically on the sideline — has coached Appomattox to the final game of the campaign.

Simply put, members of the Raiders program have stepped up to accomplish the task set before them thus far. They need to do the same now, for just 48 more minutes.

“Saturday, we’ve just got to execute,” said Lawing, a junior quarterback and defensive back.

The Raiders’ hopes for a second straight title Saturday depend on it. They’ll travel to Stuarts Draft to take on the Cougars at 2:30 p.m., in a rematch of last year’s Class 2 championship game.

“Everybody has to do their job,” Lawing added.

That was the recipe in 2019 for Appomattox in its 48-21 win over Draft, that time on a neutral field in Salem.

The play on special teams set up easy scores in the championship bout, the Raiders clamped down defensively when Stuarts Draft threatened, and Appomattox’s ground game proved too powerful for the Cougars.

In going undefeated this year, the Raiders (9-0) have been clicking in all three of those aspects of the game once again. Their scoring output of about 47 points per game comes from each of the three.

Offensively, Appomattox’s attack might be best described as a blitzkrieg. Big plays are the threat every opponent has faced and none has found an answer for.

Baker, Lawing and Pennix each have more than 475 yards rushing on the season. Those three, in addition to five other players, all average more than 8 yards per carry.

The Raiders average 246 yards per game on the ground and have 32 rushing touchdowns.

Lawing, the strong QB who will command the offense for a second time in a state title game, also can move the ball through the air, tallying 499 yards and 10 TDs thanks to targets like Booker, Jordan Scott and Davin.

“We’ve just gotta continue to block,” Lawing said. “I have to make great passes. Running backs, we just have to run hard and protect the ball.”

Defense and special teams, though, Pennix is convinced those are the areas that have given the Raiders the biggest boost.

“Our defense is the reason we’re winning,” said Pennix, a running back and defensive back. “Defense and special teams.”

Booker, Davin and Pennix have combined for four kickoff returns for touchdowns. As a team, the Raiders average more than 56 yards per return.

They’ve tallied eight blocked punts or field goals, a few of which have led to touchdowns.

Defense has created plenty of momentum this season, too, recovering 19 fumbles and recording 13 interceptions, with four of those turning into pick-sixes.

The Raiders have run over opponents, but Stuarts Draft stands in the way of their fifth ring in six years.

Draft has playmakers, as well, including a handful of seniors who’ve been catalysts in the Cougars’ run to the title game.

Seniors Dustyn Fitzgerald, Blake Roach and Cobey Rothgeb, along with junior Symeon Balser, form a running back corps that can take direct snaps, burning opponents with misdirection in an offense that employs Wing-T concepts.

“The biggest thing we have to do is slow down their run,” Castello said. “If we’re not disciplined and physical with what we’re trying to key on, they’re gonna be able to run the ball up and down the field all game long.”

Quarterback Fannon Vance, a sophomore starting for the Cougars (8-1) for the first time, also turns Draft into a dual-threat team and keeps defenses honest with his ability to move the ball through the air, if forced, finding targets like senior Jo’-el Howard.

Defensively, the Cougars have allowed more than one score in a game just three times and have posted four shutouts.

Special teams, which was a liability last year and especially in the title game loss to Appomattox, looks sound this season with the kicking ability of freshman Bryce Dennison. He can pin returners deep or boot the ball into the end zone on kickoffs for touchbacks, which could be an important factor against the speedsters Appomattox carries into the rematch.

The Raiders are confident heading into this one, Baker said this week. In search of his third ring, the senior is familiar with the desire to be the team celebrating on the field at the end of it all, so he knows exactly what Stuarts Draft is feeling as it aims for its first crown.

But if, as his quarterback explained, every player continues to contribute, and if they stay locked in, the Raiders have a good chance to deny the Cougars again.

“It’s the state championship. They want it. We want it,” Baker said.

“We just have to want it more.”

Ben Cates contributed to this report.

If the Raiders take advantage of Cougars errors, showcase their speed in the open field and get stingy on defense, the title will likely go back to Raider Country for the fifth time in six seasons.

To say it's been a breakout senior campaign would be an understatement. It's about more than that. Booker is on a quest, knowing the end of high school is near, to give everything he can, to perfect his craft, to sew his name into the fabric of this program.

APPOMATTOX — One’s a veteran with plenty of big-game experience and leadership skills. The other’s a young athlete with all the upside in the world.

Tre Lawing, a Raider through and through, leads Appomattox into Class 2 state title game

Runner, thrower, defensive contributor, leader. Basically, the type of durable and resolved guy you want handling the ball in the clutch.