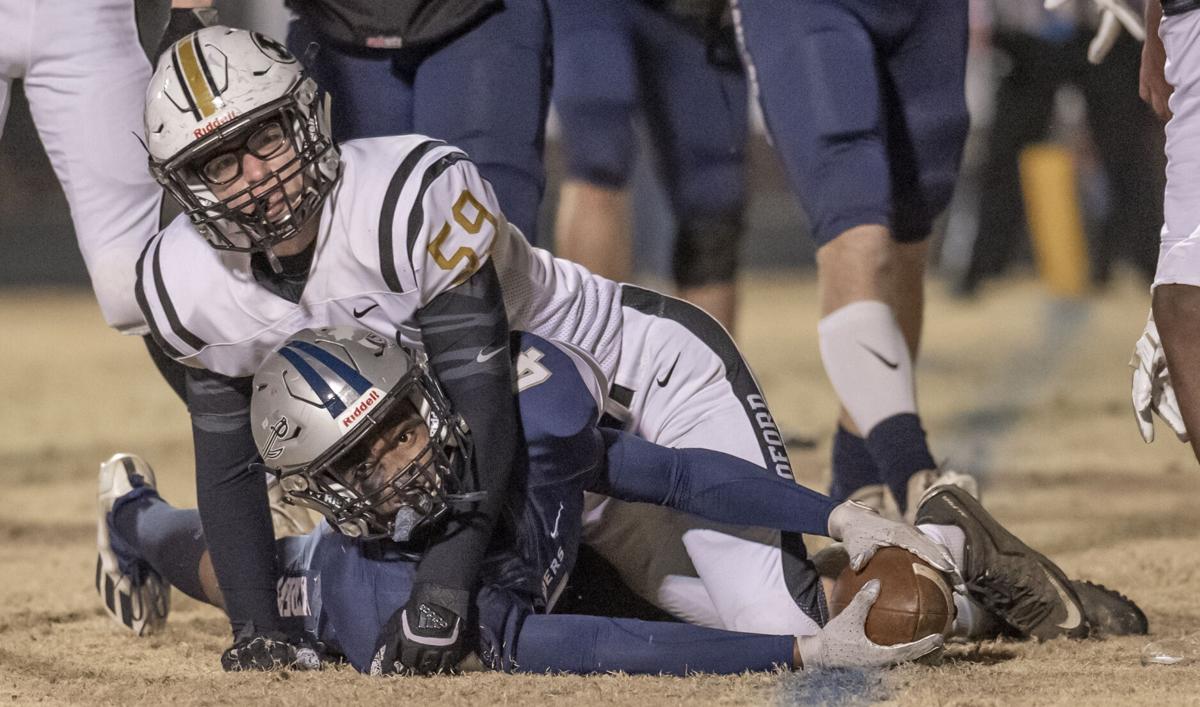 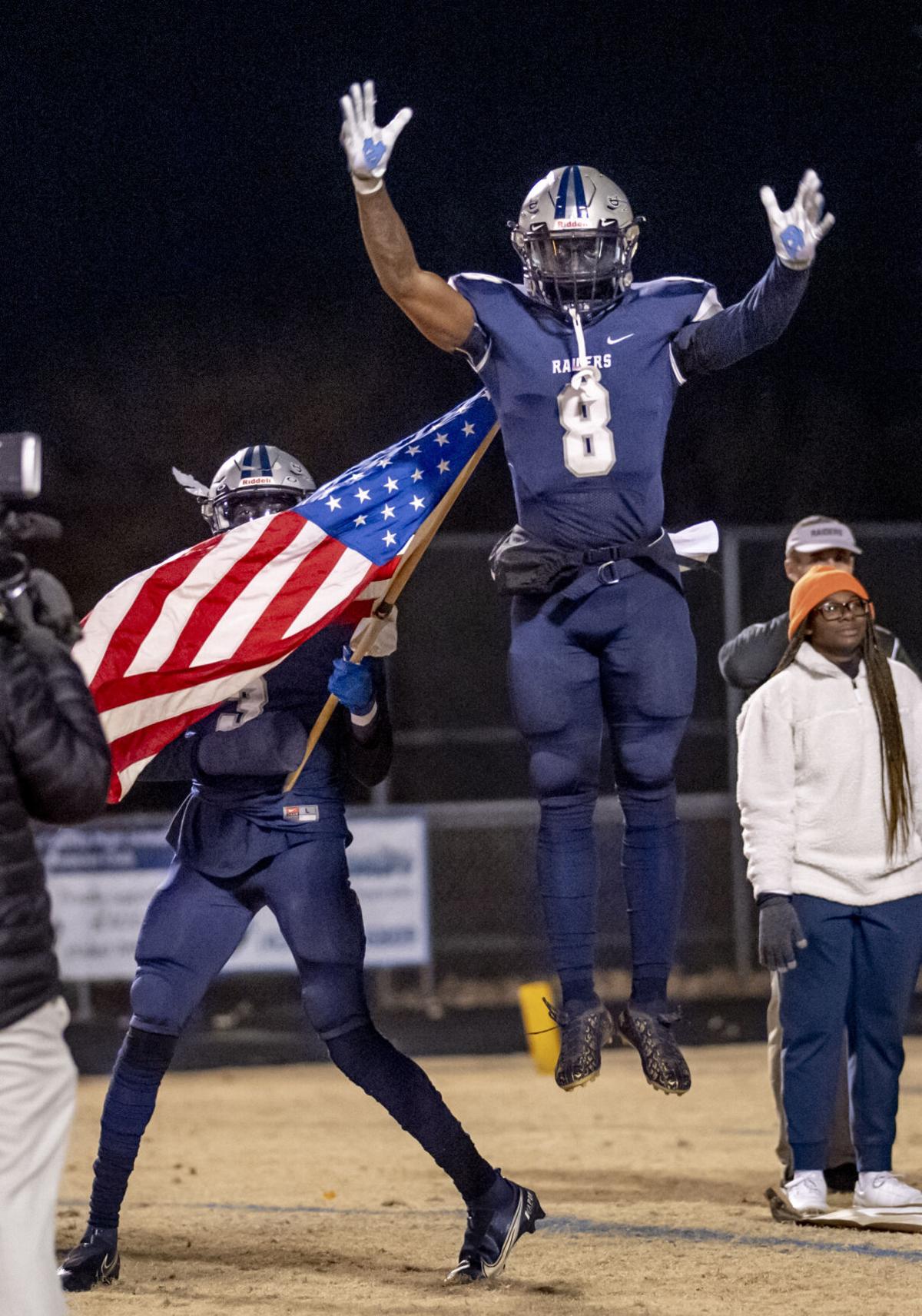 Appomattox quarterback Tre Lawing (right) gets the crowd and his team hyped up as teammate Vori Copeland waves the American flag before the Raiders battled Radford in the Region 3C semifinals Friday at Bragg Stadium.

APPOMATTOX — Tre Lawing was nearly out of breath as he walked back toward the Appomattox bench. He was a few paces away from being greeted by his teammates when Raiders coach Doug Smith gave his quarterback a gigantic hug on a frigid Friday evening.

The only thing Lawing could utter at the moment was: “I’m just having fun out here!”

He and the Raiders had plenty of fun on the near frozen tundra of Bragg Stadium.

Lawing scored a whopping six touchdowns to lead a potent rushing attack that broke Radford’s will over the final 27 minutes, and Appomattox advanced to the Region 2C championship game with a 56-28 victory over the visiting Bobcats.

“When we play like this together as one and play for each other, that’s when we have the most fun,” Lawing said. “I think this is honestly the first game we done had this much fun in a long time. It’s just a blessing to be out here to play with my brothers and in front of the fans.”

They will travel to Highlander Stadium to face the region’s No. 1 seed, Glenvar, on Nov. 26 at a time to be determined.

Appomattox and Glenvar are meeting in the Region 2C playoffs for the fifth time since the 2017 season, and this matchup will mark the third time they meet for the region title.

The Raiders have won the previous four meetings, including the most recent in the spring that resulted in a 48-21 victory that was contested at Bragg Stadium.

“Glenvar is always tough and we know we’ve got our hands full,” Smith said.

Appomattox, the region’s No. 2 seed, used a late first-half drive to seize control of the third-seeded Bobcats (8-4) and rode the feet of Lawing in the second half to pull away.

He picked up 64 yards on three carries in the lone third-quarter scoring drive that put the Raiders ahead 35-14.

He returned a fumble 27 yards for a touchdown, and he capped the return with a somersault over Radford quarterback Landen Clark into the end zone that prompted him telling Smith that he was having fun on the field.

Radford, thanks to the right arm of Clark, trailed 21-14 late in the second quarter when Crist went to a trick play to try to fool the Appomattox defense.

Marcell Baylor took the handoff on a sweep and attempted a pass to Parker Prioleau in the end zone. Prioleau, though, was triple-covered, and Collin Slagle came up with the easy interception at the 5-yard line.

JaQuan Walker and Jonathan Pennix helped Appomattox quickly work down field with strong running (Pennix had a 15-yard run and Walker’s 53-yard sprint got the Raiders into the red zone), and Lawing finished off the drive with a 2-yard plunge for a 28-14 lead heading into halftime.

Clark threw for 404 yards on 25-of-33 passing with three touchdowns and two interceptions.

Radford did not have a run game to complement Clark’s passing. The Bobcats were limited to 47 rushing yards, which allowed the Raiders to go after Clark in the pocket.

Appomattox rushed for 364 yards on 44 attempts. Walker finished with 105 yards and Pennix added 89.

“A Radford team came in here with some talent and great ability, so I know our kids had to play a great game up front to get it done,” Smith said.

“I can’t say enough about our kids,” the coach added. “They really wanted this thing tonight for each other and they wanted it for this school, this community, and they fought hard tonight to show it.”

Wednesday marked the initial signing date for those headed to NCAA Division I and II schools.

Appomattox quarterback Tre Lawing (right) gets the crowd and his team hyped up as teammate Vori Copeland waves the American flag before the Raiders battled Radford in the Region 3C semifinals Friday at Bragg Stadium.