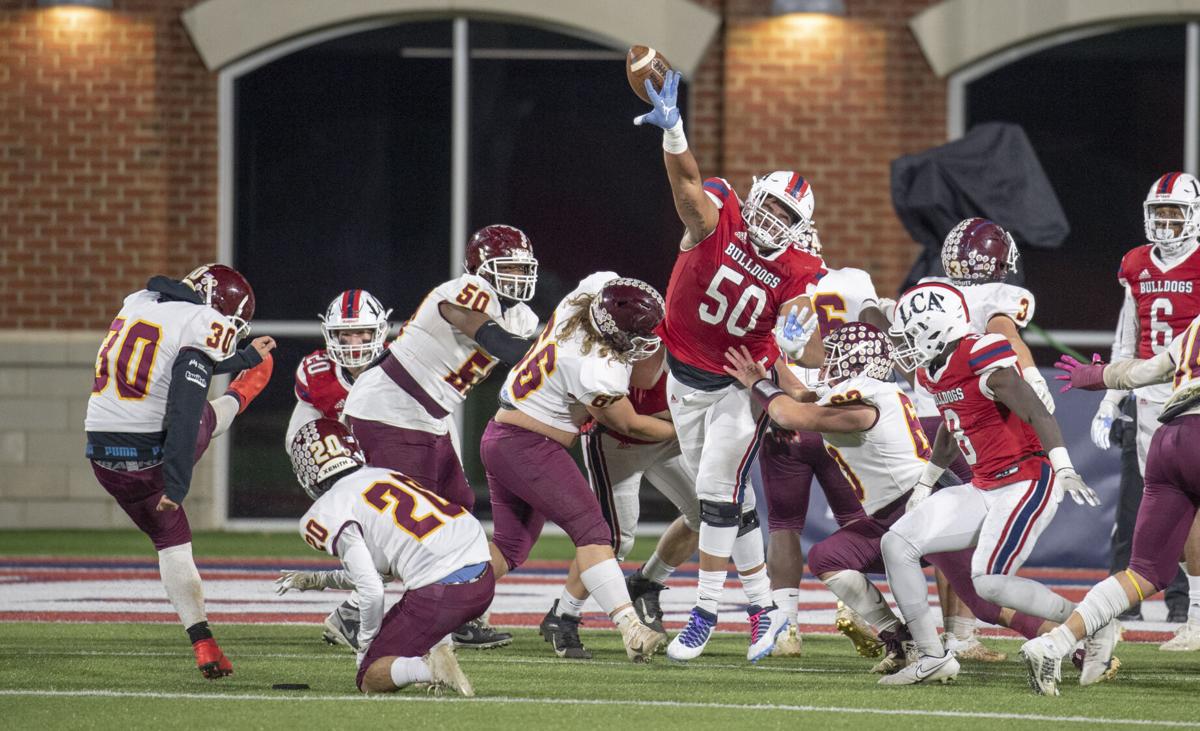 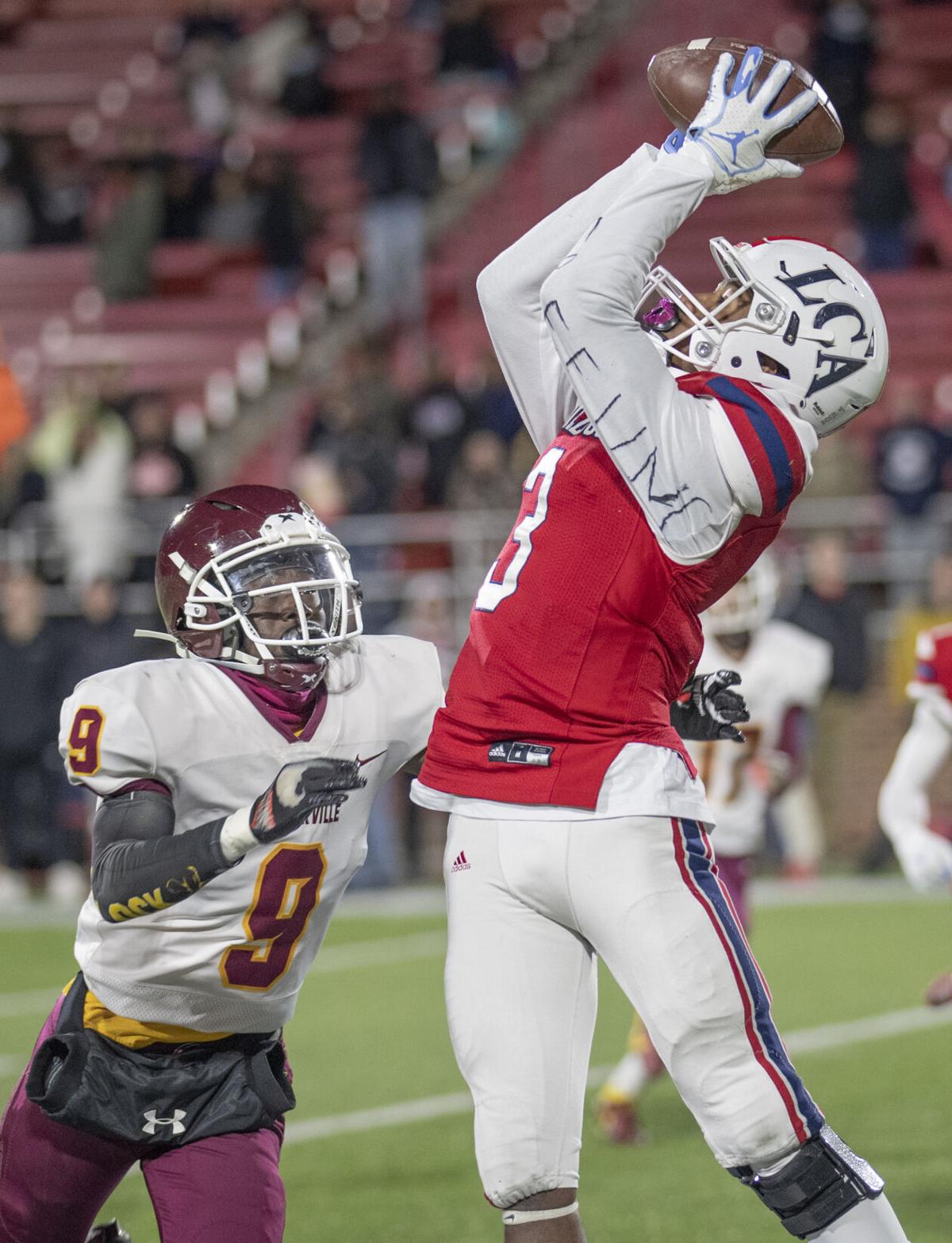 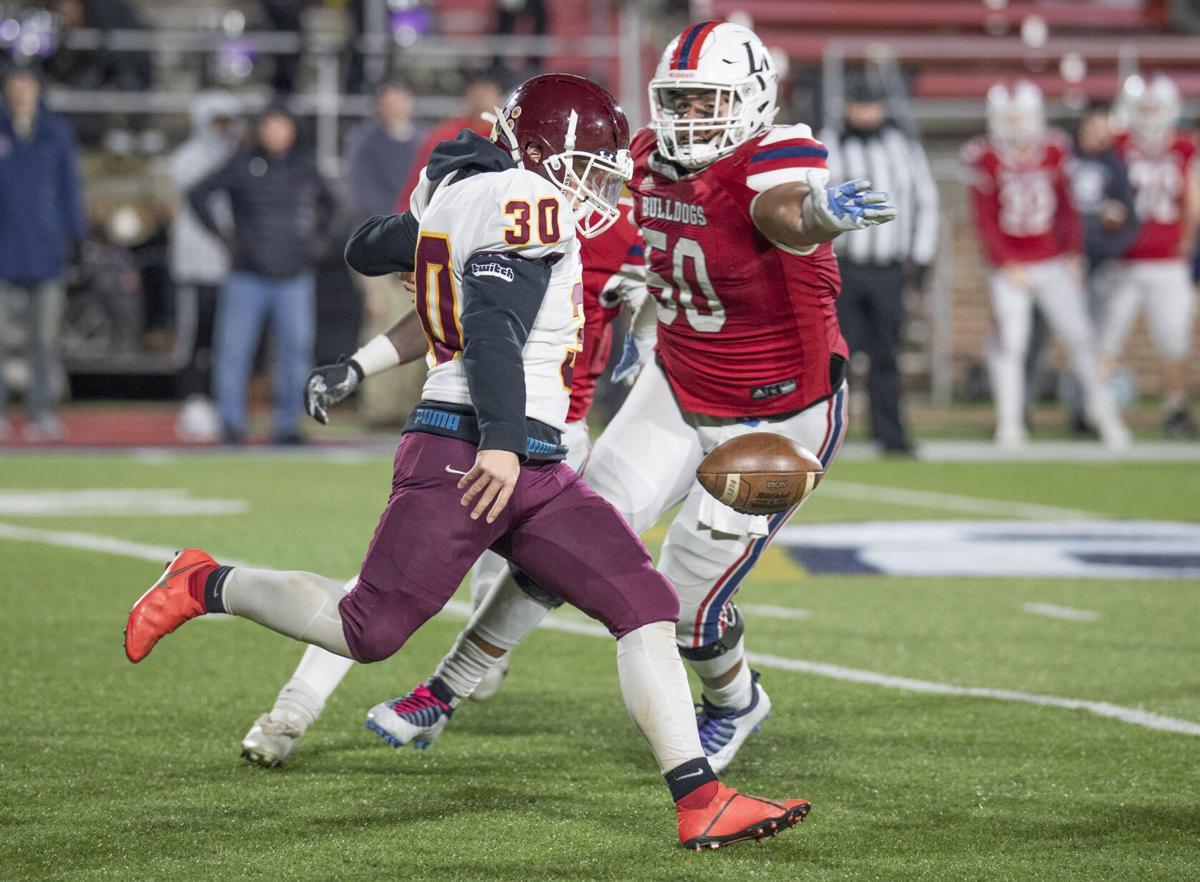 Brookville's Joshua Ayers gets off a punt just in time before LCA’s Zach Rice could block it during the Region 3C championship game at Liberty University's Williams Stadium on Nov. 26. 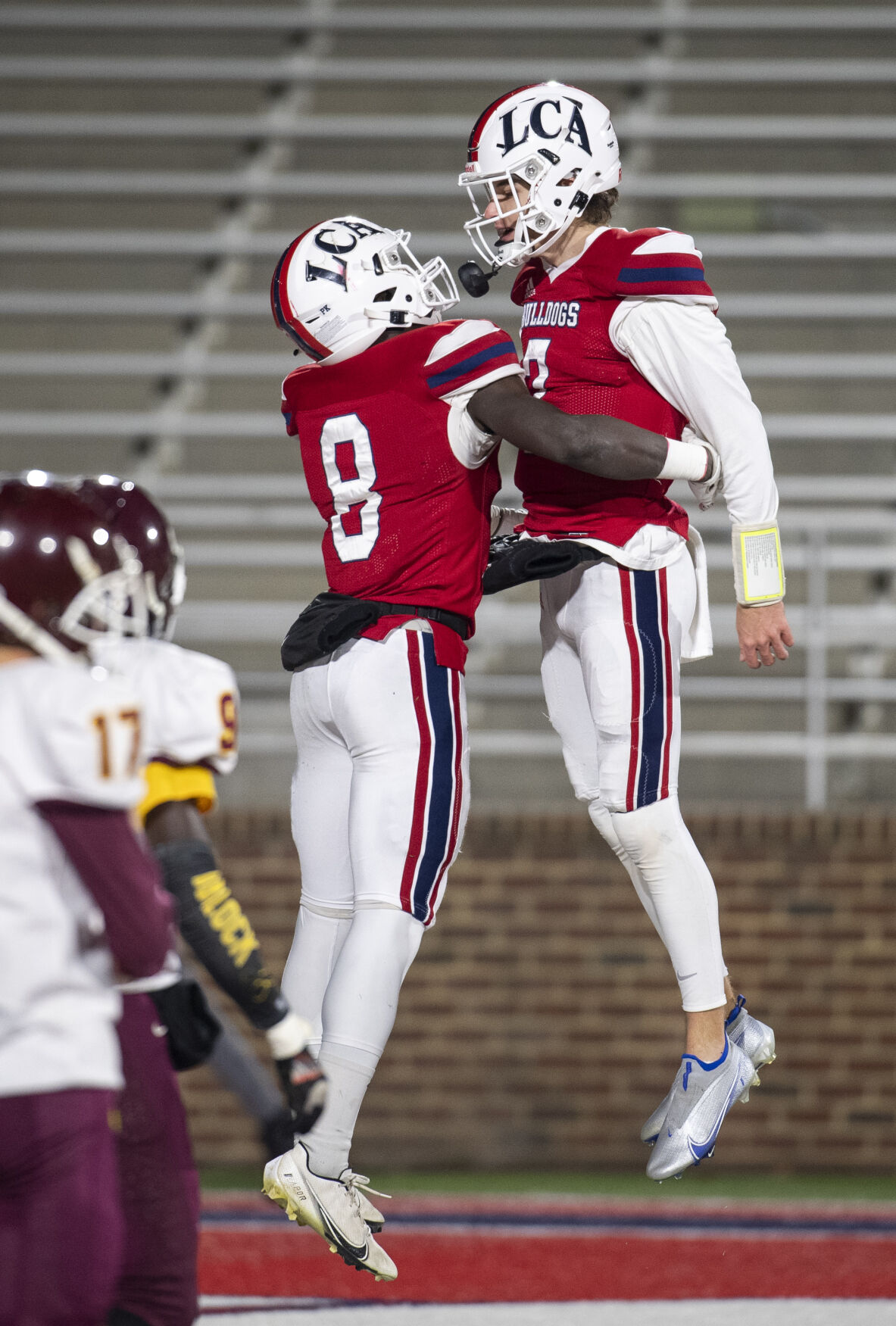 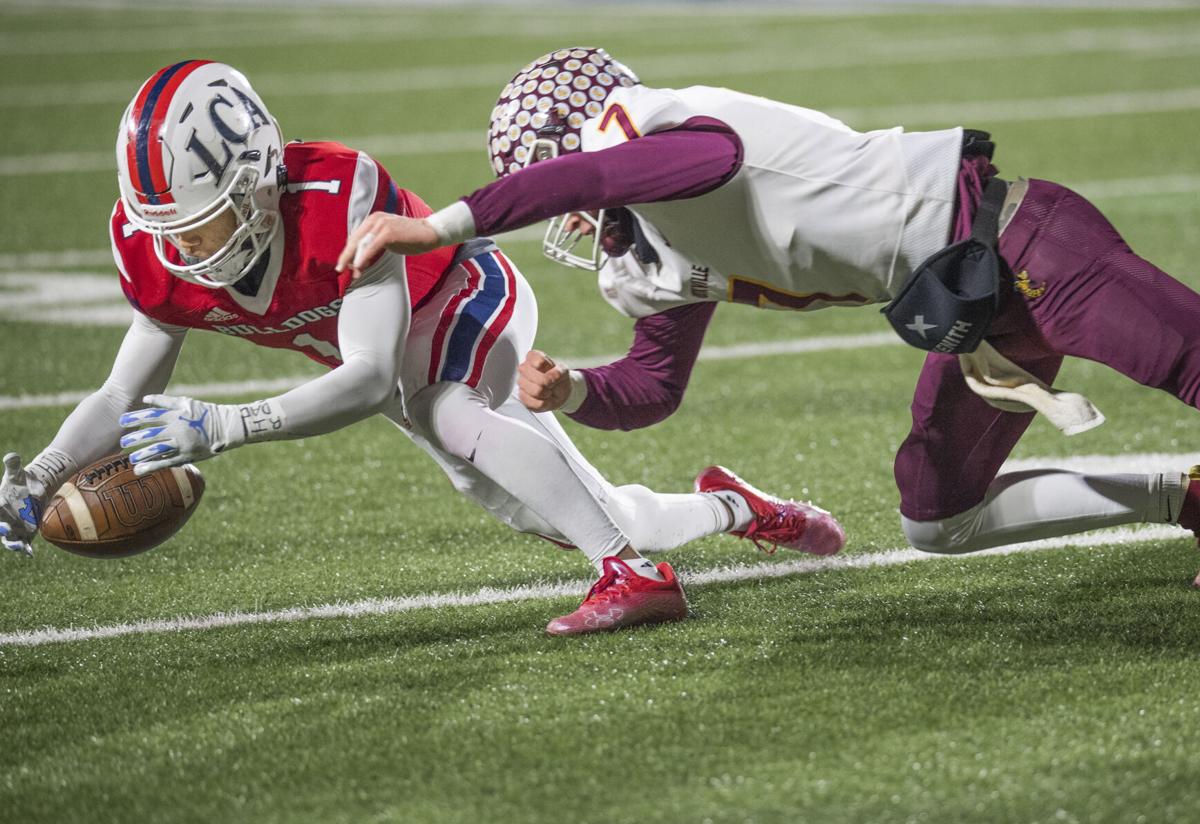 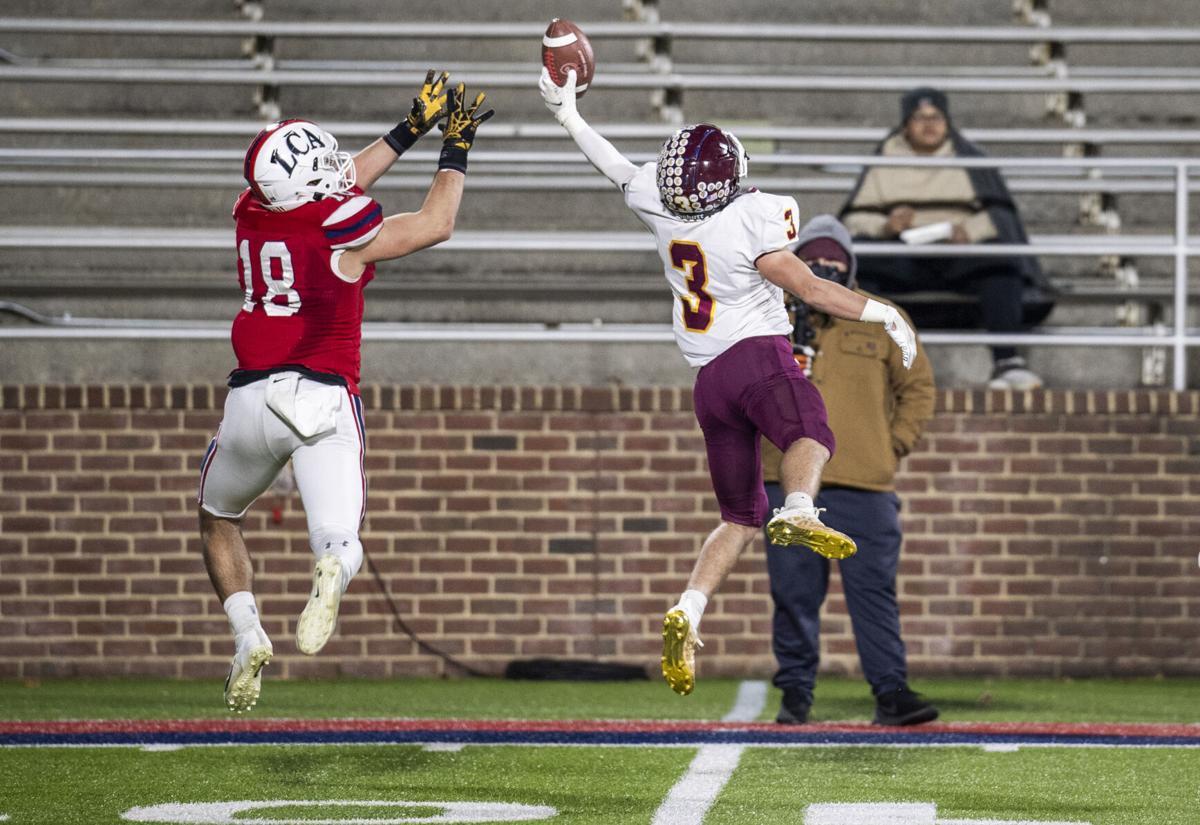 "Nothing, really," the Liberty Christian senior quarterback said when asked what holes he saw in the Brookville defense that contributed to his success. "My receivers just made plays, honestly. That's all it is."

The LCA playmakers were out in full force against the Bees, and Lane carved a path through Williams Stadium. The UVa commit threw for 154 yards, rushed for 50 more and accounted for three touchdowns as the Bulldogs claimed the Region 3C championship for the second straight season by knocking off Brookville 42-6.

The win vaulted LCA (12-0) into the Class 3 state semifinals. It hosts Abingdon next Saturday at a time to be announced.

The victory was LCA's second over the Bees (8-4) this season and also marked the second straight season it has knocked off BHS in the playoffs.

LCA found the end zone for the first time midway through the first quarter when DeAndre Jones ran in a 14-yard touchdown. Caleb Davidson (54 rushing yards) intercepted a pass from Drake McDaniel on Brookville's next drive and then punched through on a 3-yard run less than a minute later for a quick 14-0 lead.

The Bulldogs went up 28-0 before the Bees could score, getting a 9-yard TD from Gideon Davidson (89 rushing yards) at the start of the second quarter and a 64-yard strike from Lane to Jaylin Belford with 3:58 left in the first half.

Lane dumped that pass into an open spot about 12 yards up the middle, and Belford saw an opening. That's all he needed. Belford eluded a couple defenders and streaked down the field alone.

"It's a blessing," Lane said. "Without [playmakers like Belford] I wouldn't be where I am. I get them the ball and they make stuff happen. They catch the ball just about every time, so it's awesome."

Lane completed 7 of 13 passes and scored LCA's final two touchdowns of the night — a 7-yard run on his team's first drive of the second quarter and a 6-yard run early in the fourth frame. LCA kicker Chase Dupin made all six of his PAT attempts.

Brookville got on the board with 2:02 left in the first half on a 30-yard sprint by Stephen Preston. LCA lineman Zach Rice blocked the PAT attempt.

The loss brought to an end the sterling high school career of Tayshaun Butler, who rushed for roughly 2,000 yards in his senior season. For a running back, that stat is unheard of in recent years in Bees Country. Butler managed 105 yards on the ground Friday, no easy feat since he often was bottled up near the line of scrimmage by LCA's hulking offensive line.

Butler broke away for a 38-yard run in the first half, but that was the only time he escaped the LCA defense, which held him to 6 yards or less on 19 of his 20 carries.

"It was an uphill battle," Butler said. "The game was all about who swung first and how you responded. They hit us in the mouth first, and we didn't respond well. ... It's been a great season overall, but it's been a roller coaster. We had some really, really high times, we had some low times. But I'm proud of my team through it all. They never gave up on me. I'm thankful for that."

In the moments after the game, Butler put his career into perspective. "I'd probably say out of all of the games, I'm proud of myself most for this game," he said. "There wasn't a lot going, but I did as much as I could. I kept my head up. I never gave up."

Bees quarterback Drake McDaniel completed 4 of 13 passes for 71 yards. The Bulldogs poured on 421 yards of total offense to Brookville's 204. Dillon Stowers caught three passes for 80 yards, and Belford had three catches for 76 yards.

Brookville, trying to get back in the game in the second half, gave LCA short fields to work with off turnovers on downs. But it hasn't been Brookville's style under coach Jon Meeks just to punt when trailing big and then hope the score doesn't get worse.

"I hope others can see it: there's no quit in this group," BHS coach Jon Meeks said. "We preach that, and we try to back it up in the way we coach. Yeah, late in the game I had a couple opportunities to punt the ball and possibly keep [LCA] at 35 [points] and do the whole moral victory thing. But I'm not built like that. The day I punt to try to keep a game close — we're gonna fight to the end — is the day I quit and I won't coach any more. We're either gonna get back in the game, or it might get ugly. And that's 100% on me. But I think this group plays like that. They didn't quit."

LCA has never been past the state semifinals. It lost in that round last season to Lord Botetourt. The Cavaliers fell to Abingdon (12-1) on Friday.

"We were able to keep them under wraps and get bodies to the ball," LCA coach Frank Rocco said of BHS. "And for the most part we shut them down defensively. So I thought that's where it really was based, stopping them, and then we do what we do on offense."

Lane said his team is resolved to break through semifinal round and into the championship, especially given last year's loss.

"We're very motivated," he said. "We wanna go all the way and win it. That's really all we've been talking about since the beginning."

Brookville's Joshua Ayers gets off a punt just in time before LCA’s Zach Rice could block it during the Region 3C championship game at Liberty University's Williams Stadium on Nov. 26.