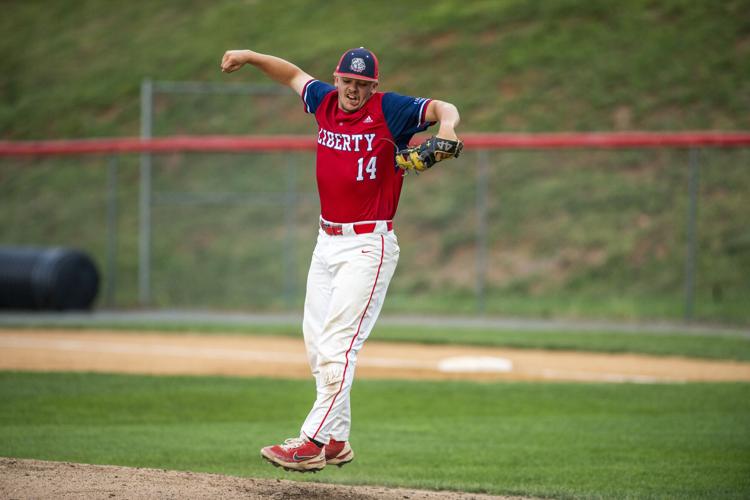 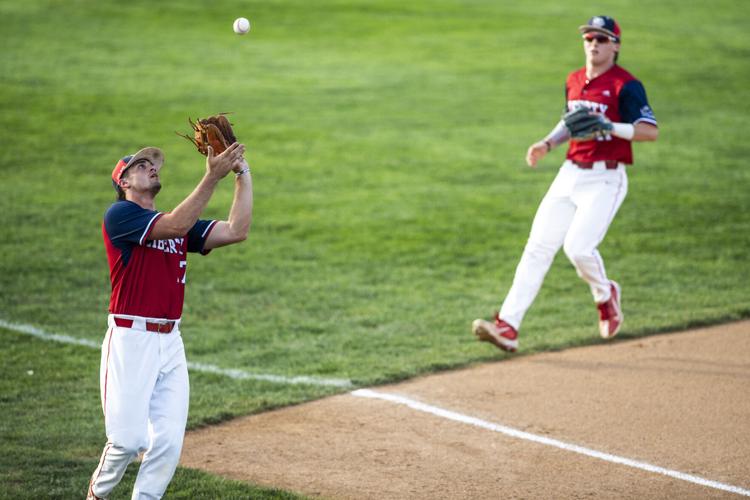 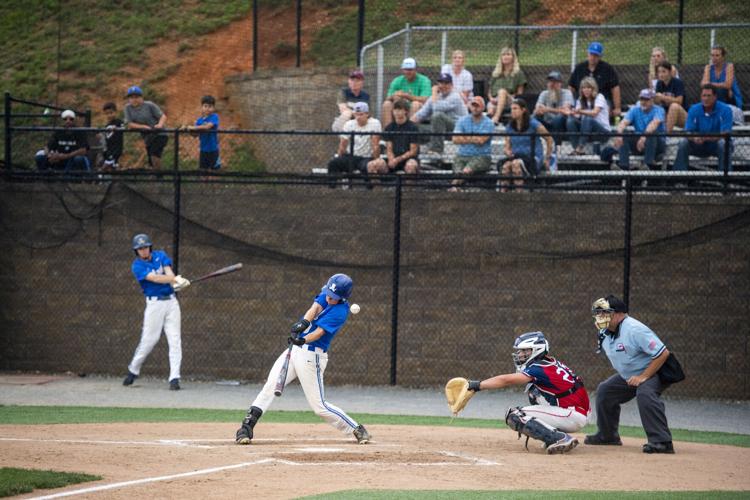 Spotswood third baseman Trevor Shifflett fouls off a two-strike pitch in the second inning of the Region 3C championship game at Liberty Christian on Thursday.

Landon Owen unleashed a powerful scream as he hopped off the mound Thursday evening. His strikeout of Spotswood’s Andrew Baugher allowed Liberty Christian to escape a second-inning jam and preserve a two-run lead in the Region 3C championship game.

The sophomore right-hander has come up big in those types of situations this season. LCA has always had pitching depth, and Owen is the continuation of a trend coach Randy Tomlin has developed during his time leading the Bulldogs. It doesn’t matter if it’s early in the campaign or gearing up for a postseason run, Tomlin will elevate a pitcher from the junior varsity level to add more depth to ensure LCA has the arms to make a deep run.

Heck, Dillon Stowers was in the same position as a freshman in 2019.

“Right now, Landon, he’s moving, he’s rolling,” Stowers said. “I remember my freshman year, Tomlin brought me up and I pitched in the district championship, region championship and then the state semifinals. This is looking a lot like that. He’s mowing them down and until he shuts down, we’re going to ride with him.”

The addition of Owen has bolstered a rotation that features Ben Blair and Will Palmer as the first two starters with the likes of John Simmons, Stowers and Ben Blondino mixed in. The staff complements an offense that is starting to hit its stride heading into the Class 3 tournament.

The arms will be needed when the Region 3C championship game resumes. The matchup between the Bulldogs (19-2) and the Trailblazers (21-1) entered a lightning delay at 7:44 p.m. and was officially suspended following heavy rainfall at 9:15 p.m.

Also Thursday, the Region 4D boys soccer championship game featuring Jefferson Forest and Western Albemarle was suspended because of inclement weather. The top-seeded Cavaliers and third-seeded Warriors were locked in a 1-1 tie with just under seven minutes left in the first half when the game went into a delay. WA scored in the 18th minute, and Kyle Butcher provided the equalizer for JF in the 27th minute. The contest will resume at 7:30 p.m. Saturday.

LCA and Spotswood will resume at 3 p.m. Friday with one out in the bottom of the second inning. Simmons is on first after drawing his second four-pitch walk of the game, and Logan Duff will be at the plate facing a 2-1 count.

LCA scored twice in the first inning while only recording one hit against Valley District player of the year Noah Burtner. The Bulldogs forced the right-hander to throw 39 pitches in the opening frame. They drew four walks and scored on Stowers’ bases-loaded walk and Palmer’s fielder’s choice RBI.

That type of plate discipline and patient approach has been the calling card for the Bulldogs this season. They exploded for 14 runs in the season-opener against Waynesboro on March 19, and they have scored four or more runs in all but two games this season.

The first instance was a 2-1 win over Jefferson Forest, the Region 4D champion, on May 2, and the second came in a 4-1 loss to Mike Harpster and E.C. Glass on May 17.

“Harpster’s really good. I’ll just put it that way. Harpster is one of the best, if not the best, pitchers we’ve seen this year,” Stowers said. “We’ve seen a bunch of good ones. He’s just been really good for practice for us because he puts it where he wants to put it and his slider is filthy. He had 18 strikeouts, so he’s just good.

“It’s prepared us a lot for what we’re going to see, and we’ve just been trying to ride the wave ever since.”

That was the last loss for LCA. It squeaked out a 5-1 win over Amherst to close the regular season and has rolled through regional play with wins of 14-3 over Monticello and 10-0 over Rustburg.

Blair and Palmer have shined on the mound, but the hitting has taken over.

“I think we’re playing well and getting everything in order to give it the best shot we can,” Tomlin said. “Playing good teams always helps to do that when you face good pitching and you play good teams, and it always helps you if you can endure and come out on the winning side of it.

“The Seminole is strong with some really good pitchers that help everybody prepare for postseason and doing the things you need to win and win games. Guys are settling in and hopefully going to give it the best shot we can.”

Stowers said he feels LCA’s bats are still getting better, unlike other teams who begin to fizzle when the pressure ramps up in the postseason.

A potent offense will go a long way in helping out a pitching rotation that has the depth, especially with the emergence of Owen as an electric sophomore.

“I think it’s having the depth of the arms, and the offense has been swinging it consistently all year and giving guys time to work through things, Tomlin said, “and hopefully everything’s coming together."

In Radford, Appomattox baseball clinched a home game for the Class 2 state quarterfinals by beating Alleghany 14-0 in five innings in the Region 2C championship at Radford University.

The contest was delayed twice because of lightning in the area, but neither hiatus could halt Appomattox’s momentum. The Raiders (20-1) led 6-0 when the game first was paused in the second inning, and they tacked on three more runs with two outs before Alleghany (16-8) could escape the frame.

Five more runs came across in the next two innings. Appomattox sent at least eight batters to the plate in each frame, tallied 15 hits and drew seven walks.

Five players had multiple hits in just four innings, including Hunter Garrett, who went 4 for 4 with a double and seven RBIs.

The Raiders will play host to the loser of the Region 2D championship game, which features John Battle and Gate City, in the state quarters Tuesday (time to be announced).

The teams were tied 1-1 when the game was delayed just before halftime, but the resumption set off a scoring flurry. The Flucos (9-7-1) scored back-to-back goals and never trailed again.

Fluvanna went up 3-1 on two straight goals, and the teams traded scores after that.

Liberty Christian will go on the road to take on either Lord Botetourt or Hidden Valley for the Class 3 state quarterfinals Tuesday.

Spotswood third baseman Trevor Shifflett fouls off a two-strike pitch in the second inning of the Region 3C championship game at Liberty Christian on Thursday.