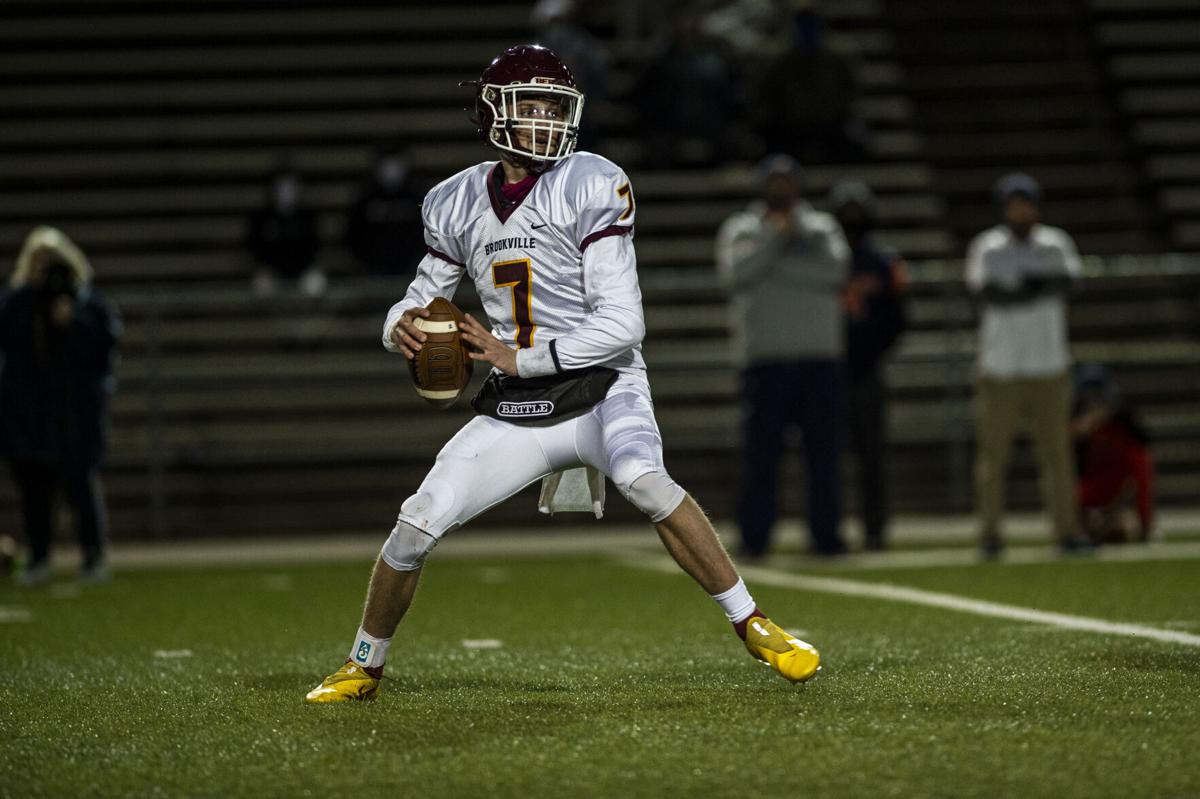 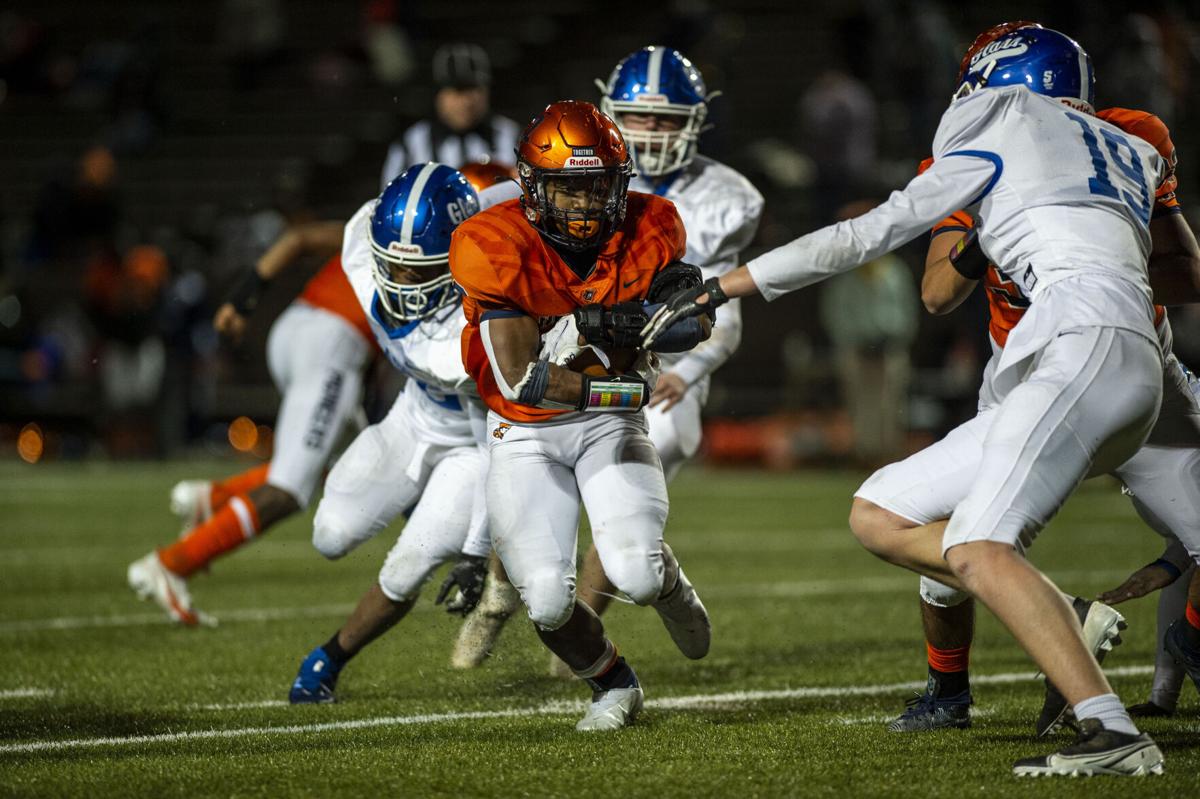 Heritage running back Zach Steele runs the ball during a game Friday against E.C. Glass at Lynchburg City Stadium.

For an understanding of just how precarious this pandemic-altered playoff picture is, look no further than the Virginia High School League’s Region 3C.

That’s where Brookville has earned the No. 2 seed despite a 6-0 record. It’s also where Liberty Christian benefitted from playing five of six scheduled games. And it’s the region where Heritage needed several scenarios to work in its favor to secure a berth.

There are similar cases all across the playoff landscape this year. Uncertainty has abounded during each of the six weeks of the regular season. Now seven area teams have earned the right to play on for as many as four more weeks.

Rockbridge (6-0) took the Region 3C top spot because of bonus playoff points. All of Rockbridge’s opponents played six games while three of Brookville’s opponents did not, which means the Bees lost out on bonus points it could have otherwise received. So the second-seeded Bees host No. 3 LCA on Friday in what will be a rematch from opening night when BHS defeated the Bulldogs 25-14.

“We don’t mind being a two seed,” Brookville coach Jon Meeks said. “Home field is what we really wanted.”

LCA (4-1) multiplied its total playoff points by five rather than six because it played five games. The Bulldogs lost out on two Seminole District games this season because of a COVID pause at Jefferson Forest and E.C. Glass, then played and defeated William Fleming to get one of those games back. Now they will be looking for revenge at Stinger Stadium.

“I think we’re both two different teams now,” Meeks said of the progression each program has made since Week 1. “I think we’ve gotten better in all phases.”

Heritage (5-1) heads to top-seeded Rockbridge on Friday after defeating Glass last week to stay in the playoff hunt. HHS also benefitted from Rockbridge’s Week 6 victory over Turner Ashby, which pushed the Knights from the playoff picture.

“It’s not about me,” Bradley said of that record. “It’s about how we do things, especially at Heritage. I’ve got a great support staff, administrators. There are so many tangibles that go into a football team making the playoffs year in and year out. …

“It’s not about one person. Winning is about the whole program. From who washes the clothes, to our trainer, Chris Hallberg, to coaches preparing until 4, 5 in the morning, to team managers.”

Heritage faces a pass-heavy offense in Lexington on Friday. Win and the Pioneers will go up against either Brookville or LCA next week in the region championship round.

In Region 4D, fourth-seeded Amherst (3-3) travels to No. 1 Salem (6-0), which has claimed three of the last five Class 4 state titles. Amherst got into the field after defeating Rustburg, Jefferson Forest and Glass, totaling its amount of victories from the previous two seasons combined. The Lancers outpaced JF, fifth in the region standings, by more than two points.

In Region 2C, defending state champ Appomattox (6-0) is the No. 1 seed and plays at home Friday against No. 4 Radford (4-1), which recently underwent a two-week COVID pause before returning to the gridiron to blast Richlands last week. Win and the Raiders face either No. 2 Dan River (4-0) or No. 3 Glenvar (4-2) for the region title.

The Raiders are playing this season for Smith, who was diagnosed with multiple myeloma last fall. Even in his absence, they are scoring nearly 57 points per game and allowing just 4.8 per game. Appomattox did not play its scheduled game against Nelson last week, a contest that went down in the books as a Governors forfeit.

Note: Even though this delayed season is taking place in 2021, the VHSL will refer to its eventual state title winners as 2020 state champions. The league made that announcement to avoid confusion about the upcoming August-through-December season, when it will return to its normal schedule.

Kool & The Gang blared from the speakers at Williams Stadium late Friday night, singing about a celebration.

“Sometimes, when you know, you know,” Kate Hardie said.

Heritage is aiming for its fourth straight Region 3C championship. Standing in its way is Liberty Christian, which shocked Brookville last week and has emerged as a formidable challenge for the state title.

In Rustburg, the Red Devils battled back from an early deficit in the third set to add another sweep to their resume, beating Liberty Christian 25-11, 25-19, 25-23 in the Region 3C quarterfinals.

Good passing, combined with tough serving, powered the Buffaloes past the Raiders, 3-1.

A look at the day's high school results.

Glass will play in the region title game for the first time since 2012, when it made a trip to the state final four.

A breakdown of Friday's playoff matchups.

Heritage running back Zach Steele runs the ball during a game Friday against E.C. Glass at Lynchburg City Stadium.