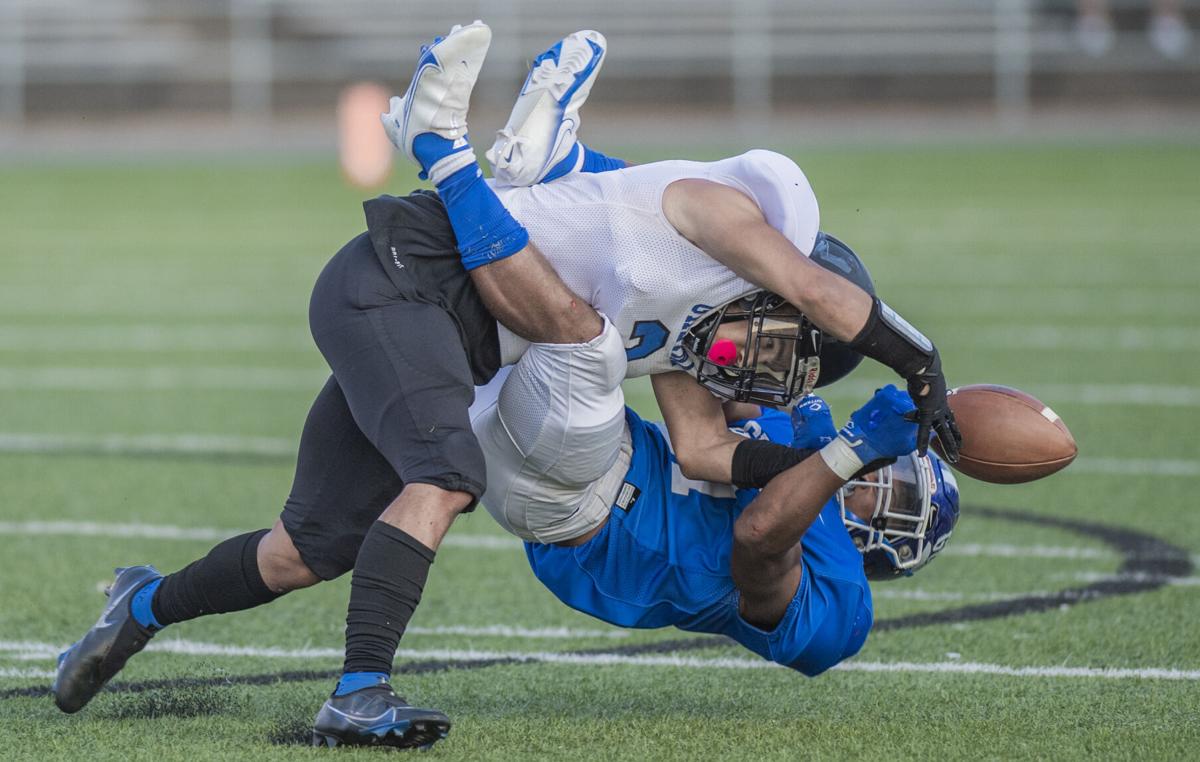 E.C. Glass defensive back Markevus Graves breaks up a pass intended for Gretna wide receiver Matthew Thompson in a Sept. 3 game. The Hilltoppers are 3-0 after beating GW-Danville this past Friday. 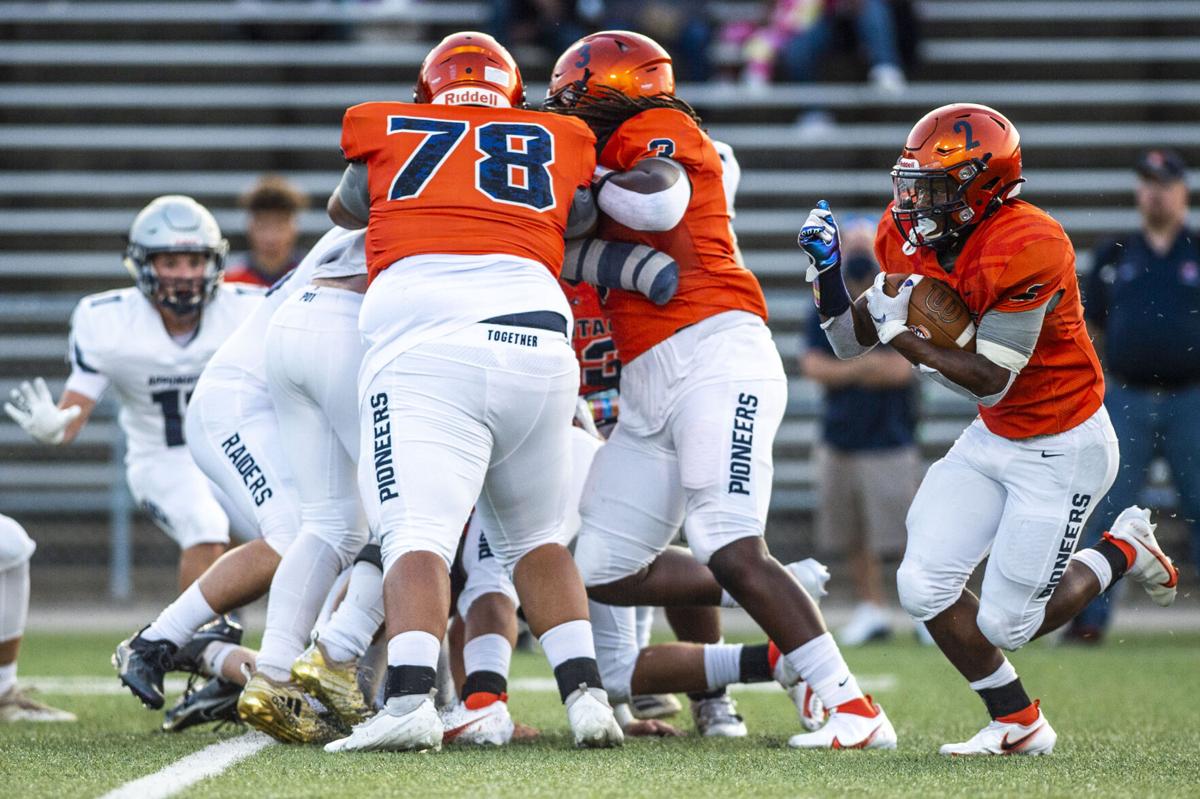 Heritage running back Zach Steele carries the ball during a game against Appomattox at City Stadium on Friday. 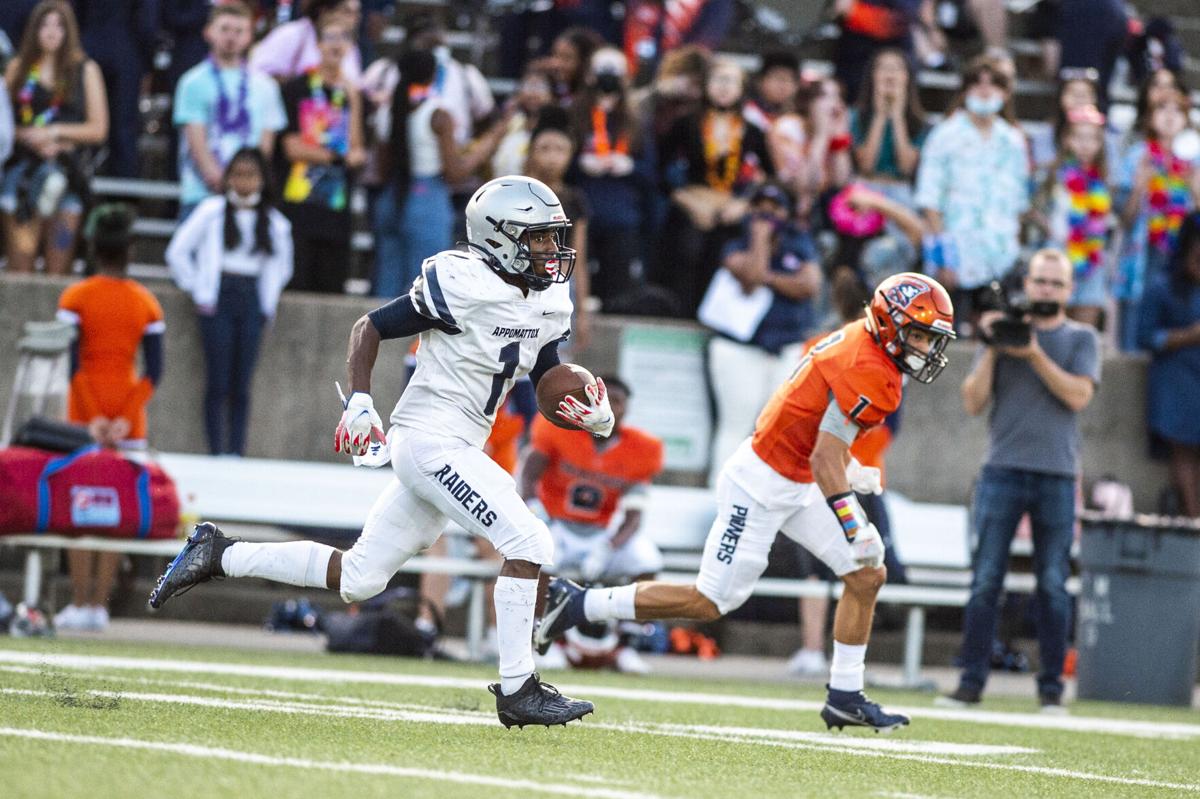 Appomattox wide receiver Ervis Davin makes a touchdown run during a game against Heritage at City Stadium on Friday. 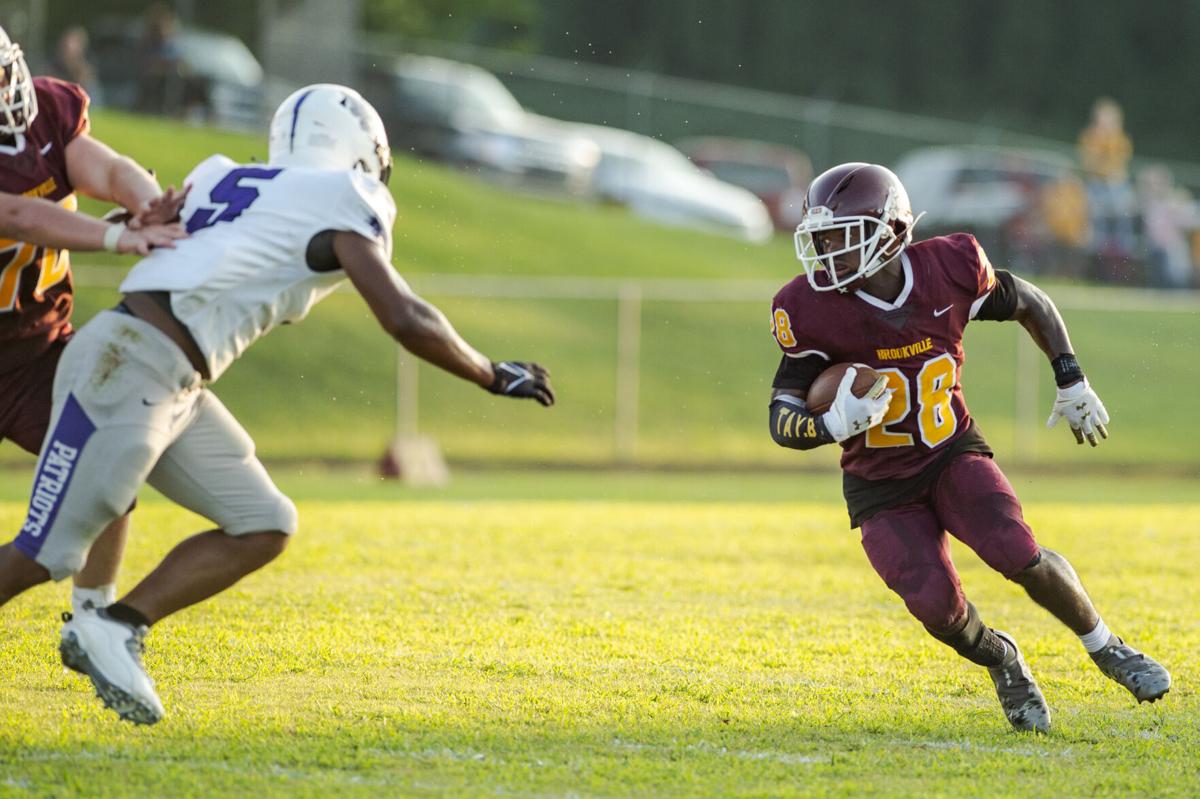 Brookville running back Tayshaun Butler looks for running room around the edge while being pursued by Patrick Henry linebacker Ar'juan Webb during an Aug. 27 game at Stinger Stadium. 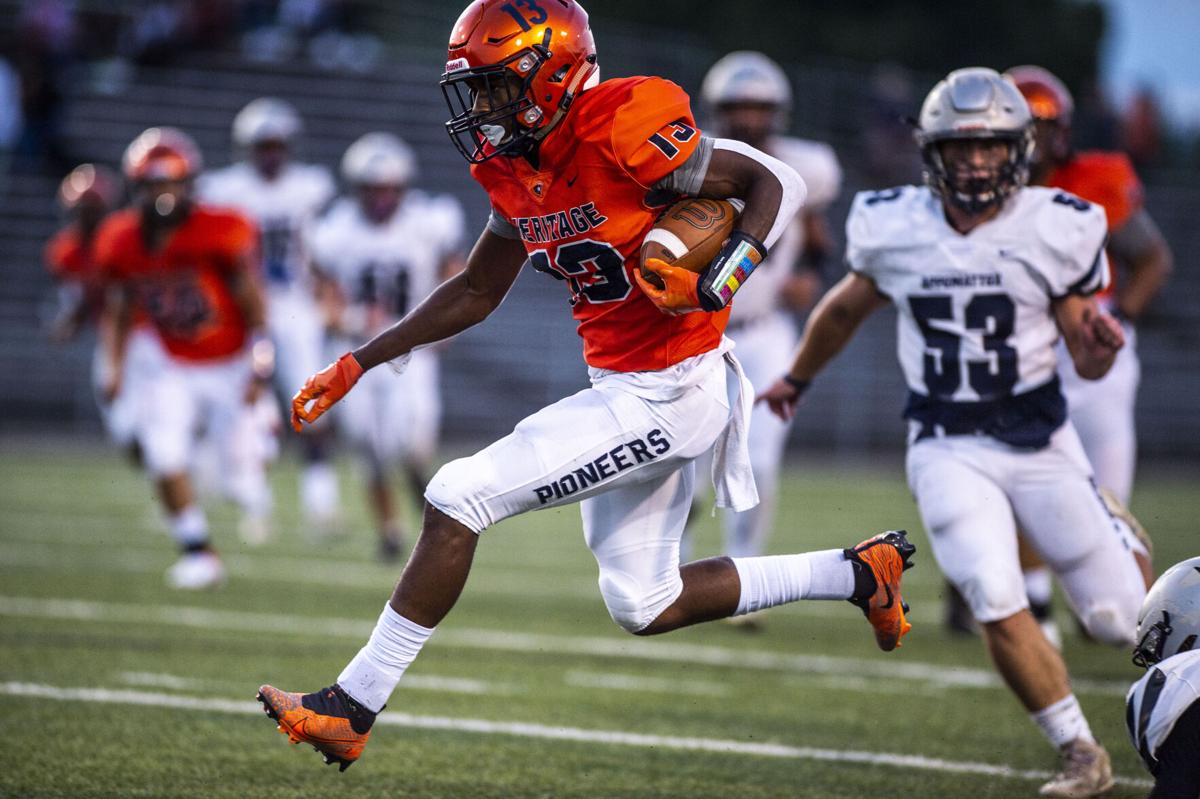 Heritage wide receiver Deuce Crawford carries the ball against Appomattox this past Friday. Crawford has more than 150 yards receiving on the season.

E.C. Glass couldn’t ever seem to get things going in the 2020 campaign — a season that took place in the spring and was shortened significantly by the coronavirus pandemic. Three games into the 2021 campaign, the outlook for the Hilltoppers is decidedly different.

Fueled by a wealth of talent, Glass has put together a 3-0 record against a tough nondistrict slate.

A surprising win over Lord Botetourt, the Class 3 state runner-up in 2020, came first, followed by victories over Gretna (in shutout fashion) and George Washington.

In each of the three, Glass has showcased a different strength. Against Botetourt, QB George White tossed six TDs. The defense swallowed up Gretna, allowing just 21 yards. And special teams sealed the win over the Eagles last week.

Glass is one of four area Virginia High School League squads still undefeated three weeks into the season. All four compete in the Seminole District.

Liberty Christian, which has proven to be the team to beat in Class 3 of late, is 3-0. Brookville flexed its muscles to start 2-0 (it had to take an unexpected bye last week because of COVID-19 issues). And by far the most surprising undefeated left is Liberty High (3-0).

The Minutemen beat William Byrd to start, then posted back-to-back shutouts over Fort Defiance and Bedford County rival Staunton River. The last time LHS has held two opponents to zero points was in 2007.

“It’s just been a really great team effort,” Chris Watts said in a phone interview Monday. “We have a small group, and they’ve realized from the beginning that they’re gonna have to work extra hard to give themselves a chance to win.”

The 3-0 start gives Liberty more momentum than its season in years. Three wins this season are more than the Minutemen have earned in the last two campaigns combined. They last were 3-0 to start in 2018 and haven’t had four straight wins to open the season since 2010.

Watts said seeing results of their work on the scoreboard makes it easier for players to trust in the messages their coaches are preaching.

“It’s believing. It’s easy to talk about [the results coming],” Watts said, “but if you’re not winning, you lose those messages really quick.”

Virginia Episcopal also is undefeated at 2-0. The Bishops, who play in an eight-man football league, followed a 52-0 win over Chincoteague with a 46-20 victory against Southampton Academy.

Multiple area teams have been forced to rearrange schedules or sit out a week or two because of either opponents’ COVID-19-related issues or their own. William Campbell and Amherst County, the two teams hit hardest, are set to return to competition this week.

Amherst will play its first game of the season — a home matchup with Liberty — on Friday. The Lancers had planned before the season started to take their bye in Week 1, but they missed out on games in weeks 2 and 3 because of COVID-19.

Coach Bob Christmas said his team began practicing again Monday after a two-week layoff. The Lancers held Zoom meetings “about every other day” during the break from practices and games, he added.

“They’re all very excited,” Christmas said of his players’ attitudes during practice Monday. Nearly 100% of players were back Monday.

The coach acknowledged his team faces “an uphill battle,” given how little time the Lancers have to get back in game shape and implement the plan for Liberty.

The Lancers will feature a new face at quarterback following the graduation of CJ Rose, with Tyleik Brown likely the starter Friday, Christmas said.

“He’s picked up the offense very well for this being his first year doing it,” Christmas said of the receiver-turned-QB. “And he’s a gamer. He plays very well when the lights are on.”

Also back this week is William Campbell, which hasn’t played since taking a 48-16 loss to Staunton River in Week 1. The Generals were quarantined following that game.

Much of the team was back to practice last week, but the Generals didn’t have enough players throughout the course of the week to prepare adequately for a game Friday, coach Danny Broggin said. Broggin said no member of his team tested positive for COVID-19, but WCHS couldn’t accomplish the logistical challenges of testing all athletes in a timeframe that would’ve allowed for a game.

The Generals weren’t affected at all by COVID-19 during the spring season, Broggin said, adding his team was “spoiled” then. Having to quarantine and not playing for two weeks provided a wake-up call for his players.

“It opened up the eyes of some of my athletes; now I see them wearing their masks right, not sharing drinks,” Broggin said. “… It was a positive more than a negative.”

The coach said his team will be at nearly 100% Friday when it takes on Central Lunenburg, another team that’s only played once, in Naruna.

Success for the Generals depends on how quickly they can get back into game shape and on the in-game improvement of a number of young players — the Generals start six of them.

Brookville intends to begin practicing again Tuesday and play Friday after sitting out a week with COVID-19 issues.

Filling up the stat sheet

Jaylin Belford’s talent has been on display in multiple ways for LCA. The 5-foot-8, 155-pound senior is listed as a receiver, but he’s also been the primary ball carrier for the Bulldogs and has racked up 500-plus yards of total offense.

He’s hauled in nine passes (including one for a touchdown) from Davis Lane for 180 yards. Belford also has 350 yards and four scores on 33 carries (10.6 yards per tote) and an 86-yard kickoff return for a TD.

Other area standouts through three weeks include Zach Steele, the Heritage junior who leads the area in total rushing yards (444), and Glass playmakers White and Eli Wood.

White, the Hilltoppers QB, and Wood, a receiver, have connected for six touchdowns. Wood has 18 total catches for an area-leading 397 receiving yards, while White has an area-high 666 yards passing. He’s gone 40 for 67 for 11 total passing TDs to go with two rushing scores.

Glass also boasts four players with more than 100 rushing yards, and LCA has three players who fit that description.

In addition to Wood and Belford, Lyvarius Gilbert (Glass), Heritage receivers Deuce Crawford and Keshaun Hubbard and JF’s Brody Jackson all have more than 150 yards receiving.

Why are the Cowboys favored to win the divison?

Who's more likely to make the CFB Playoffs: Clemson or Ohio State?

Who's more likely to make the CFB Playoffs: Clemson or Ohio State?

Down multiple players, Appomattox hopes to 'rise up under adversity' in Friday meeting with Heritage

A look at what to expect in games Friday for area teams.

The game now is scheduled to take place at 2 p.m. Sept. 18 at City Stadium.

Sometimes you don't realize how much you love something until it's gone.

E.C. Glass defensive back Markevus Graves breaks up a pass intended for Gretna wide receiver Matthew Thompson in a Sept. 3 game. The Hilltoppers are 3-0 after beating GW-Danville this past Friday.

Heritage running back Zach Steele carries the ball during a game against Appomattox at City Stadium on Friday.

Appomattox wide receiver Ervis Davin makes a touchdown run during a game against Heritage at City Stadium on Friday.

Brookville running back Tayshaun Butler looks for running room around the edge while being pursued by Patrick Henry linebacker Ar'juan Webb during an Aug. 27 game at Stinger Stadium.

Heritage wide receiver Deuce Crawford carries the ball against Appomattox this past Friday. Crawford has more than 150 yards receiving on the season.