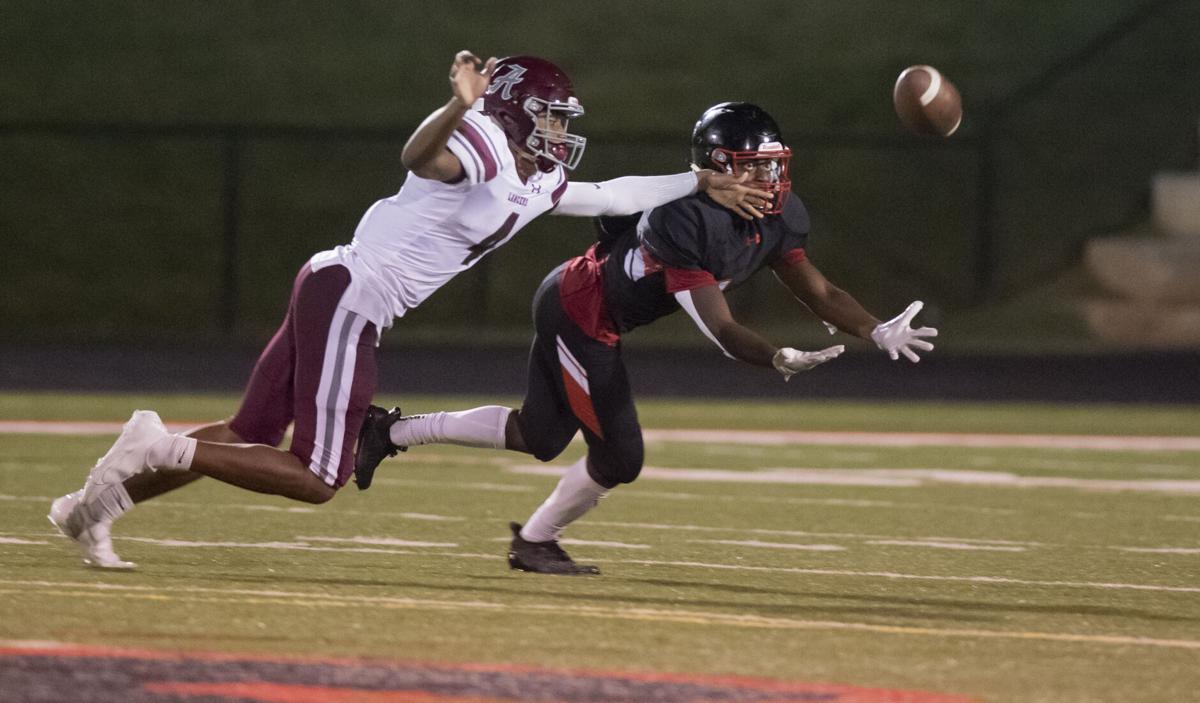 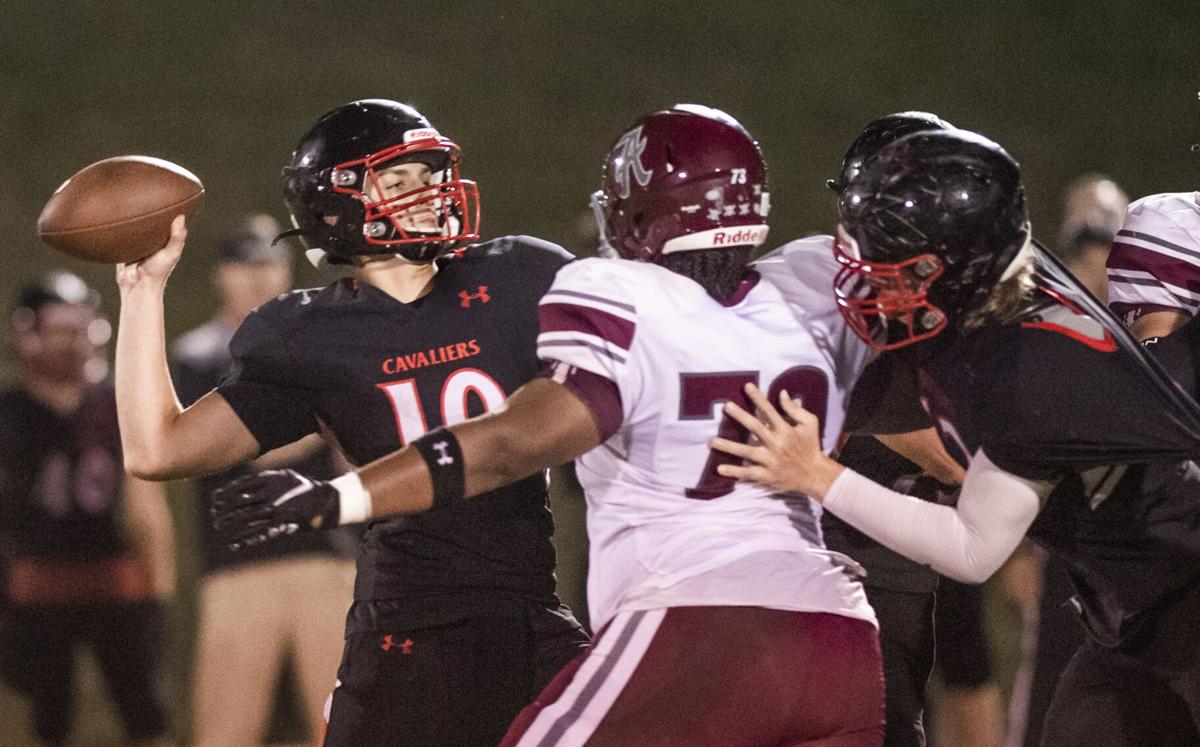 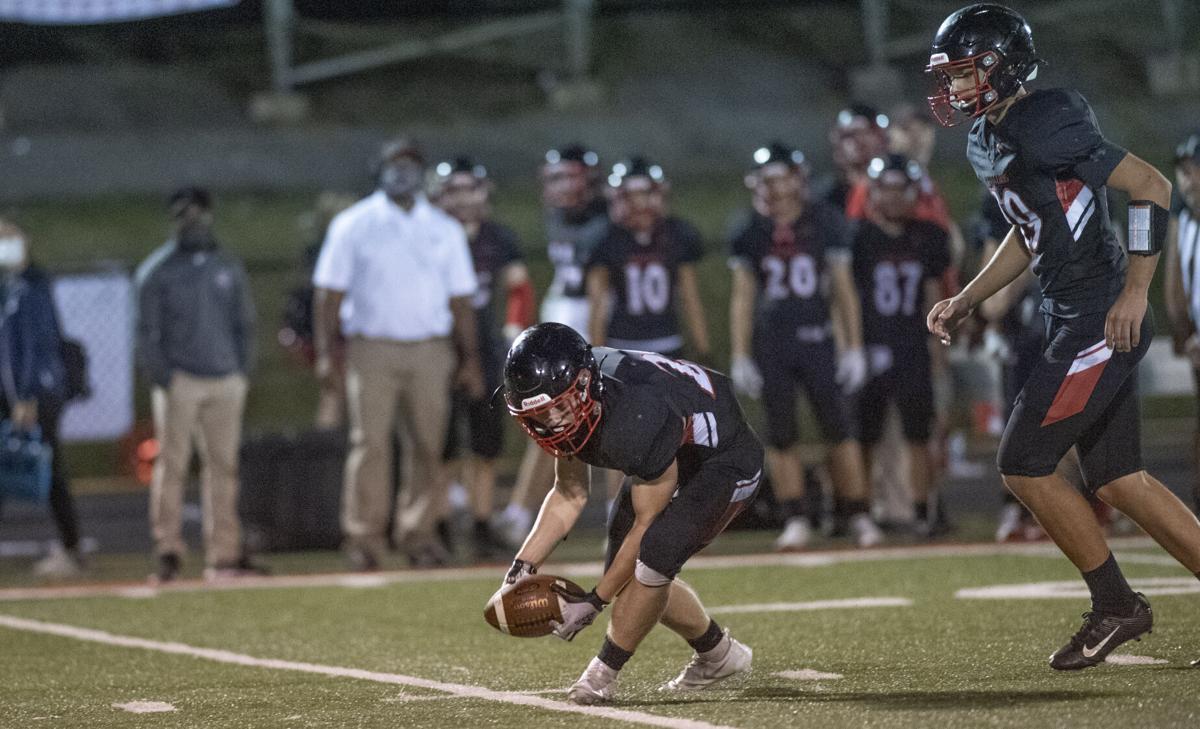 JF running back Alex Marsteller scoops up a muffed snap intended for quarterback Joe Bell (right) and turned the play into positive yards against Amherst.

After turning to the passing game often last week as they shut out Liberty, the Lancers pounded Jefferson Forest on the ground Friday, piling up 382 yards.

They scored three rushing touchdowns in the second quarter — on runs of 2 and 3 yards from Goins and a 27-yard scamper by Sweeney — for a 20-0 lead at the half. Isaiah Idore increased Amherst’s lead to 27-0 on a 56-yard run in the third quarter before Forest could put any points on the board.

Brody Jackson and Joe Bell finally found the end zone for JF (0-4) when they teamed up for a 7-yard TD.

Alex Marsteller cut the lead to 27-7 with an extra point and later scored on a 5-yard run, but JF couldn’t climb out of the halftime hole.

Marsteller finished with team highs in receiving yards (63) and rushing yards (50). Bell threw for 134 yards on 14-of-31 passing (with one interception) to five different receivers.

Idore led Amherst with 93 yards on seven carries, while Sweeney, Jor’dyn Whitelaw and Lawrence Brown each also finished with 65 or more yards on the ground.

The Lancers now are 2-0 on the season, which began late because of COVID-19 issues within the school division and immediately plunged Amherst into district play. In an effort to make up missed games, Amherst is in the midst of an eight-day stretch in which it is scheduled to play three times. Game 2 of 3 will take place at 6 p.m. Tuesday in Danville against GW.

In Bedford, E.C. Glass quarterback George White and receiver Eli Wood showed off their chemistry early by burning Liberty for a 77-yard touchdown, the Hilltoppers’ first of three first-half scores that paved the path to a shutout at Minutemen Stadium.

White threw a pair of TD passes to Wood and Markevus Graves, who also had a rushing touchdown in the fourth quarter that capped the scoring.

Graves grabbed a 13-yard pass from White with 4:35 left in the first half, then scored on a 15-yard run less than 2½ minutes into the fourth quarter. Jamarion Kittrell and Taeon Mosby accounted for the Hilltoppers’ other two scores on runs of 14 yards and 1 yard, respectively.

Glass (4-1) finished with 287 yards of total offense — well off the total they put up against Heritage in the Jug Bowl on Sept. 18, but more than enough to get the job done against Liberty (3-2).

White finished with 220 yards on 10-of-17 passing with one interception. He now has 1,332 yards passing and 18 passing TDs on the season.

Wood finished with 122 yards on four catches (for 599 receiving yards this year), and Mosby led the Hilltoppers with 86 yards on the ground.

In Appomattox, the Raiders pitched a shutout for three quarters and scored at will, pulverizing Dan River at Bragg Stadium.

It didn’t take long for Appomattox (3-1) to score, with Ervis Davin recording six points less than two minutes from kickoff. The Raiders led 21-0 after the first quarter, scored four more times in the second and increased their lead to 63-0 by the end of the third. Through the first the frames, they found the end zone once every four minutes, on average.

Dan River (0-5), which hasn’t beaten Appomattox since 2014, scored twice in the fourth quarter.

In Altavista, a problem with the lights left Dogwood District foes Altavista and William Campbell unable to finish their Friday night bout. The game will resume at 7 p.m. Monday, with just over one quarter left to play.

The contest was tied at 6 with 3:56 in the third quarter when power in one section of lights went out.

Altavista athletic director Mark McPherson said officials conferred and deemed the outage — which left one portion of the field darker than the rest, though conditions weren’t completely unplayable — “a safety issue.”

Campbell’s score came from 5-foot-8, 240-pound running back Ladarius Berkley, who capped an 85-yard drive with the TD early in the second quarter. The Generals converted on fourth down deep in their own territory to keep their drive alive.

The Generals faked the kick on the point-after attempt, but their run and two-point try failed. Altavista’s kick also failed to leave the game tied.

Both of these teams are looking to snap two-game skids. William Campbell entered with an 0-2 record, while Altavista is 1-3.

“Just because you can’t be out there physically,” Jamari’s dad, Marty Hubbard, said of the message he’s given his son over the years, “doesn’t mean you can’t be part of the game.”

Rice settled on Chapel Hill, North Carolina, as his next stop, choosing the Tar Heels over the University of Virginia, Notre Dame, Alabama and Ohio State.

It was a fitting title, because the senior running back laid down the law, helping Brookville defend Stinger Stadium by fighting off visiting Amherst 36-21 in a clash between two Seminole District foes.

Tayshaun Butler was explosive last week, putting up more rushing yards in a single game than any other area running back this season. The 5-fo…

“I think they’re really motivated,” E.C. Glass coach Willie Wilson said of his team, which aims to earn some momentum in their last few games of the regular season — which include a marquee matchup with Rustburg at 7 p.m. Thursday.

A recap of the day's high school sporting events.

JF running back Alex Marsteller scoops up a muffed snap intended for quarterback Joe Bell (right) and turned the play into positive yards against Amherst.