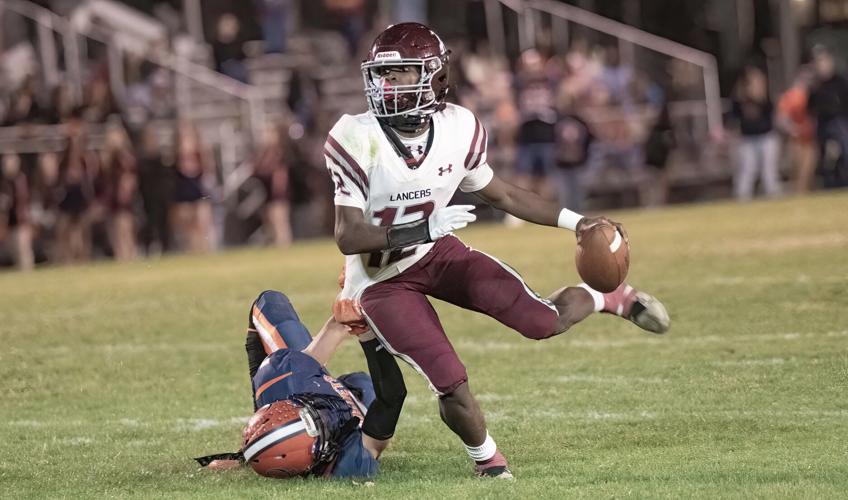 Amherst's Devonte Wade stays focused on his receivers despite a Orange County defender hanging on during a two-point conversion during a Nov.10 Region 4D quarterfinal game at Orange. The Lancers won, 40-14, to advance to the next round. 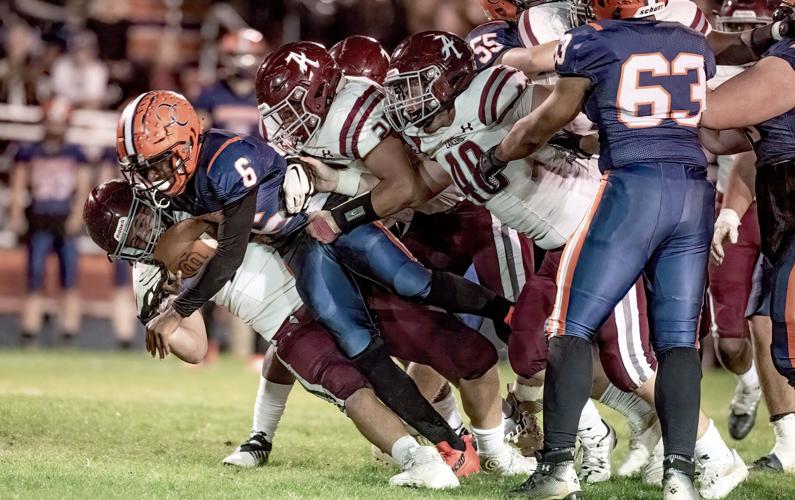 McDaniel, Jor’Dyn Whitelaw and Michael Viar combined to rush for 393 yards on 55 rushing attempts. Whitelaw added 138 yards and a touchdown.

McDaniel completed 1 of 2 passes for 16 yards to Whitelaw.

The Bees (8-3) advance to the semifinal round and will renew the Timberlake Road rivalry with Heritage (9-2). Next Friday’s 7 p.m. matchup is scheduled to be played at Lynchburg City Stadium, the site of the Pioneers’ 10-7 win on Oct. 8.

It is the second straight season in which the Seminole District programs are meeting in the Region 3C semifinals. Brookville won last season’s semifinal matchup, 50-21, and Heritage won the first two playoff meetings in 2017 and 2018 by scores of 62-20 and 21-0, respectively.

Wilson Memorial ends its season with a 7-4 record.

If Amherst’s Wing-T offense wasn’t going to methodically wear down Orange County’s defense, it was going to be the fresh ball carriers the Lancers utilized on nearly every possession.

Eleven different players took their turns toting the rock against the Fighting Hornets. The hosts eventually lost the sting in their defense.

Amherst racked up 430 rushing yards, five different players scored rushing touchdowns, and the Lancers kept their season alive with a rousing victory in the Region 4D quarterfinals at Porterfield Park in Orange.

The Lancers (7-4) advance to the semifinal round and will play the winner of Saturday’s game between top-seeded E.C. Glass and eighth-seeded Halifax County next week.

Tyrique Thomas finished with 96 yards on the ground.

Amherst responded by scoring 40 straight points to seize control. The Lancers lost four fumbles but made sure the Hornets were unable to capitalize on those miscues by creating five takeaways.

Four were completed. Two went for long touchdown passes that broke the game open in the second half.

Barns threw for 127 yards with two touchdown passes for Macon Ayers, Ayers added a rushing score, and the Golden Eagles won a postseason game for the first time since 2017 by defeating the Warriors in Ridgeway.

Seventh-seeded Staunton River (6-5) will play at either Christiansburg or Abingdon in the semifinal round.

The Golden Eagles racked up 219 rushing yards, but it was Barns’ passing that opened things up in the second half. Magna Vista led 21-14 at halftime, but the Warriors (7-4) were held scoreless over the final 24 minutes.

Josh Kelley, who rushed for a team-high 70 yards, tied the game at 21 with his 9-yard run in the third quarter, and the Barns-to-Ayers connection took over after that with scoring strikes of 58 and 36 yards.

Joseph Spriggs rushed for a game-high 109 yards for Magna Vista. Forty-nine of those yards came on a touchdown run in the first quarter that put the Warriors ahead 7-6.

Radford quarterback Landen Clark threw three touchdown passes and ran for a fourth as the Bobcats outlasted Gretna in the Region 2C quarterfinals in Radford.

Top-seeded Radford (10-1) will host fourth-seeded Appomattox next weekend in the semifinal round.

K’mari Chatten returned kickoffs 91 and 86 yards for touchdowns for the Hawks (5-6).

Heritage gets revenge on LCA to claim Region 3C championship

Heritage got the revenge it was looking for against LCA, which had won the last three in the series, and also dashed the Bulldogs' hope for a third-straight region title.

“It’s what the build has been [about]. The rebuild, the process."

Tuesday's sports news from the area.

Saturday will be 'monumental' day at City Stadium as Heritage and E.C. Glass play in state semifinal doubleheader

For the first time, football programs at E.C. Glass and Heritage both will host state semifinal matchups, creating a twin billing at Lynchburg City Stadium.

After Further Review: The rites of Thanksgiving

When Heritage football coach Brad Bradley gathered his group for a celebratory huddle after defeating Brookville last weekend, he repeated a l…

Amherst's Devonte Wade stays focused on his receivers despite a Orange County defender hanging on during a two-point conversion during a Nov.10 Region 4D quarterfinal game at Orange. The Lancers won, 40-14, to advance to the next round.