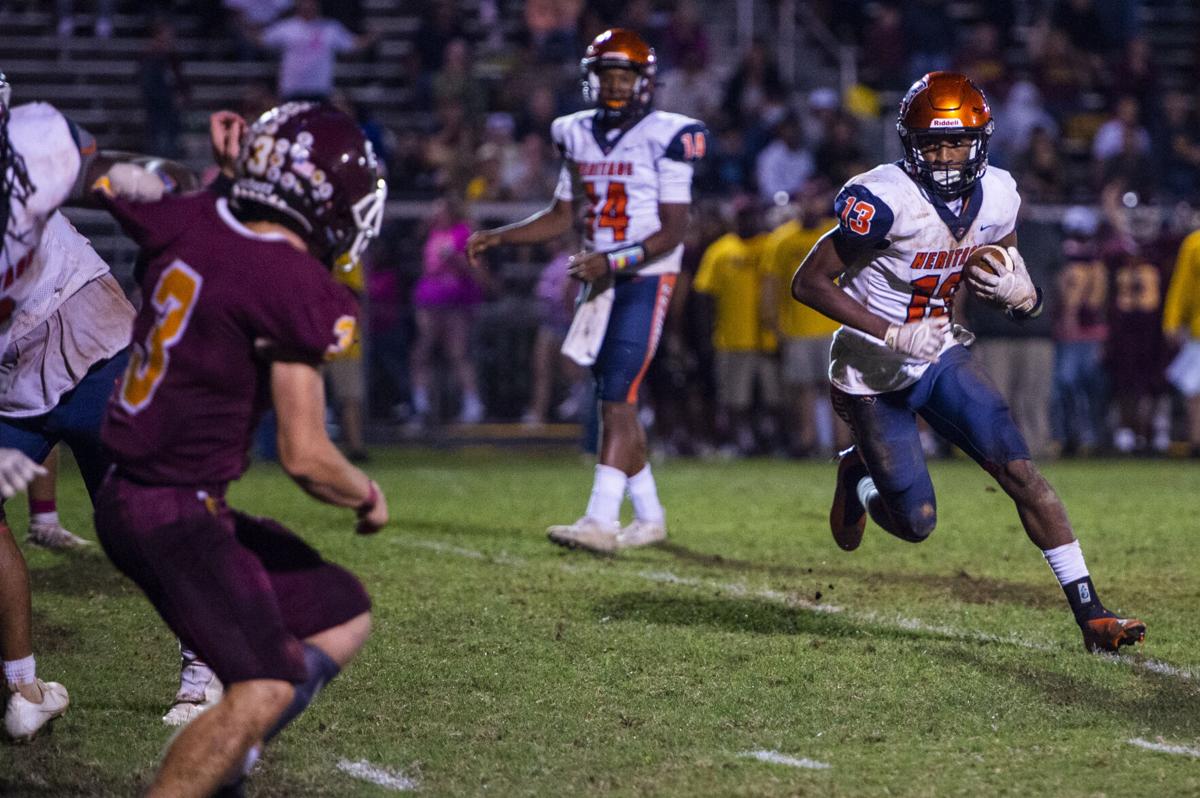 Heritage wide receiver Deuce Crawford runs the ball around the left side for a 10-yard touchdown in the second overtime against Brookville at Stinger Stadium on Friday. 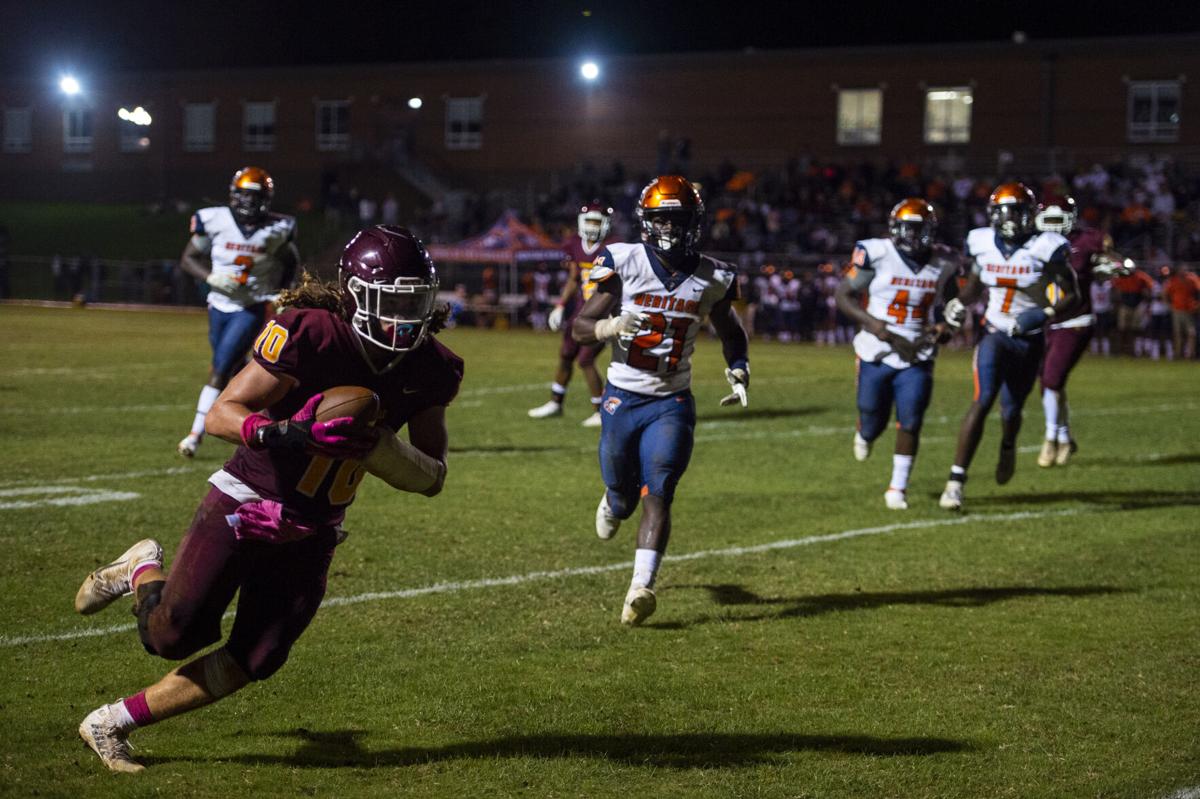 Brookville wide receiver Addison Ellis heads to the end zone as part of a 6-yard touchdown pass from Drake McDaniel in the second quarter against Heritage at Stinger Stadium on Friday.

Friday's tense, hard-hitting rivalry game between Heritage and Brookville was one for the record books. Both teams now turn their attention to the remaining three weeks of the regular season, knowing they could well meet once more in the playoffs.

The Bees and Pioneers have met twice in the postseason since 2017, and Heritage has won both matchups. Both teams are vying for a first-round home game when the playoffs begin in one month, on Nov. 13. Should they tangle again, the matchup most likely would occur in the second or third round of the postseason.

On Friday, they put on a show in the first double-overtime matchup in the series' long history, which dates back to 1980 and was renewed on an annual basis in 1996. After both teams scored eight points in the first overtime, Heritage's Deuce Crawford scored the go-ahead TD with a 10-yard run, and Karson Adcock kicked the PAT. Brookville netted 4 yards on its final trip from the 10-yard line, and HHS defensive back Darius Brown batted down Drake McDaniel's pass in the end zone for the victory.

It was a meaningful win that gave the Pioneers a 3.6-point lead over Brookville in the Virginia High School League's Region 3C power points rankings. Liberty Christian is currently the top seed with 27.20 points. Heritage is next with 25.66 points, followed by the Bees at 22.00. Friday's game represented pivotal swing in the rankings because Heritage led BHS by less than a point prior to the victory.

"That's what Friday night's all about," Brookville coach Jon Meeks said after the game. "Big rivalry, I saw two playoff teams go after it all night. It was a physical game. But I saw two teams with kids consistently knocking the crap out of each other and then helping each other up. No talking, no pushing, no pointing fingers. Literally, two teams left it all on the line, low penalties, and I don't remember a ref addressing me or [Heritage] coach [Brad] Bradley at any time for any reason.

Heritage (5-1, 3-0 Seminole) now heads to Liberty Christian (5-0, 1-0) for another marquee matchup to be played at Lynchburg City Stadium at 7 p.m. Friday. It's the game to watch across the area. Heritage has won four straight since its Week 2 loss at Dinwiddie, while LCA was idle last week because its game against Jefferson Forest was postponed.

"Kids win football games, and [Friday night] they stepped up," Bradley said. "It was unbelievable. You've got to give credit to that staff and that team, though. Brookville battled hard. My hat's off to Coach Meeks and their football program. We know we're gonna see them again."

Staunton River quarterback Lucas Overstreet completed 11 of 13 passes for 223 yards and threw three touchdowns as the Golden Eagles improved to 3-2 Tuesday night with a 37-6 victory at Alleghany, continuing a tough stretch of three games to be played in a seven-day span.

Gretna High's Elliot Dews shot a 10-over-par 82 Tuesday at the Class 2 state golf championship at Olde Mill Gold Resort in Laurel Fork and finished in a three-way tie for ninth place. Dews, a senior, was playing as an individual after qualifying for the tournament at last month's Region 2C championship.

In the Class 4 state championship at Abingdon's Glenrochie Country Club, Amherst's Brice Reichard was the only area player to make an appearance. Reichard finished with a 10-over 82 and in a four-way tie for 39th. His round included six pars, one birdie and 11 bogeys. Blacksburg won the team title by 13 strokes and finished 3 under, claiming its third state championship since 2016.

LCA senior lineman Zach Rice will make a much-anticipated announcement about where he will play college football at 7:30 p.m. Thursday, Oct. 21. The highly touted Division I recruit with roughly 50 offers to his credit appears to have narrowed down the list to five schools: Alabama, UVa, UNC, Ohio State and Notre Dame.

He tweeted out information of his upcoming commitment over the weekend. Rice is rated the nation's seventh highest overall recruit for 2022, according to 247Sports.

He's guided Heritage to a 22-5 record in his three years at QB.

Heritage wide receiver Deuce Crawford runs the ball around the left side for a 10-yard touchdown in the second overtime against Brookville at Stinger Stadium on Friday.

Brookville wide receiver Addison Ellis heads to the end zone as part of a 6-yard touchdown pass from Drake McDaniel in the second quarter against Heritage at Stinger Stadium on Friday.