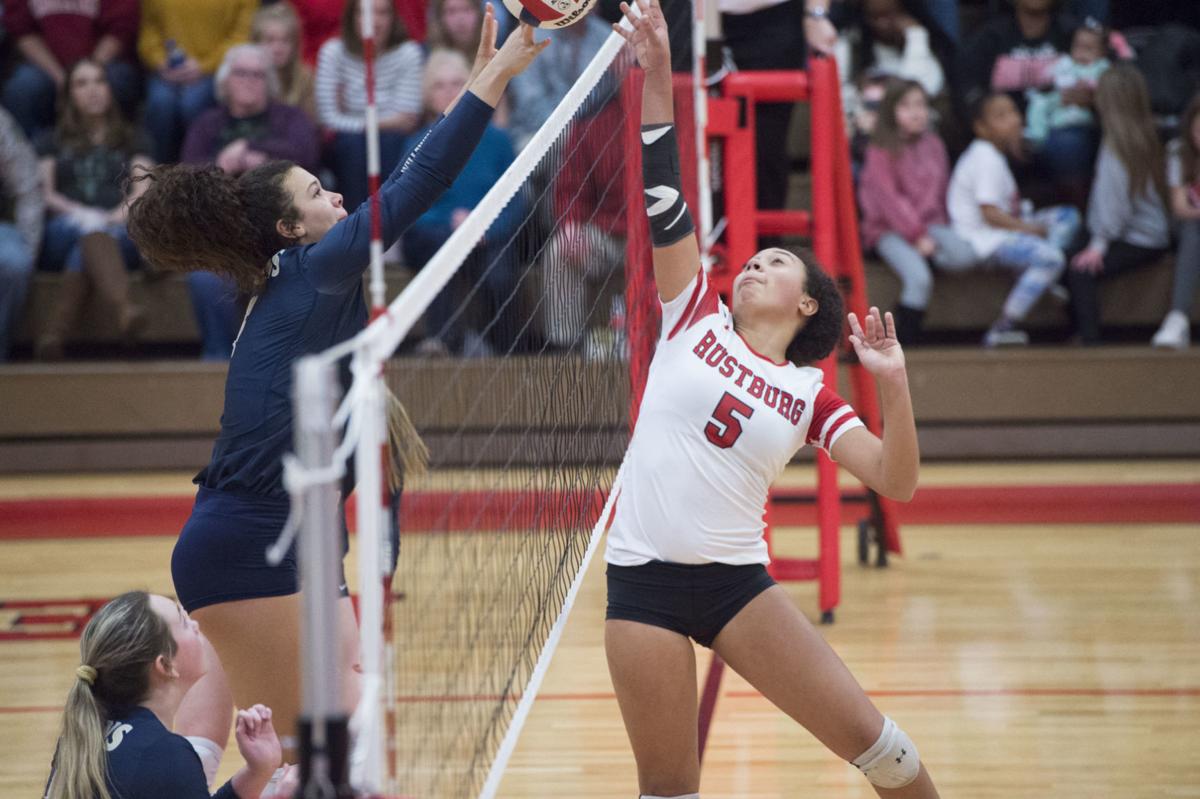 Meah Coles (5) taps the ball over the net during the Class 3 state quarterfinal game against Hidden Valley at Rustburg High School on Nov. 16, 2019. 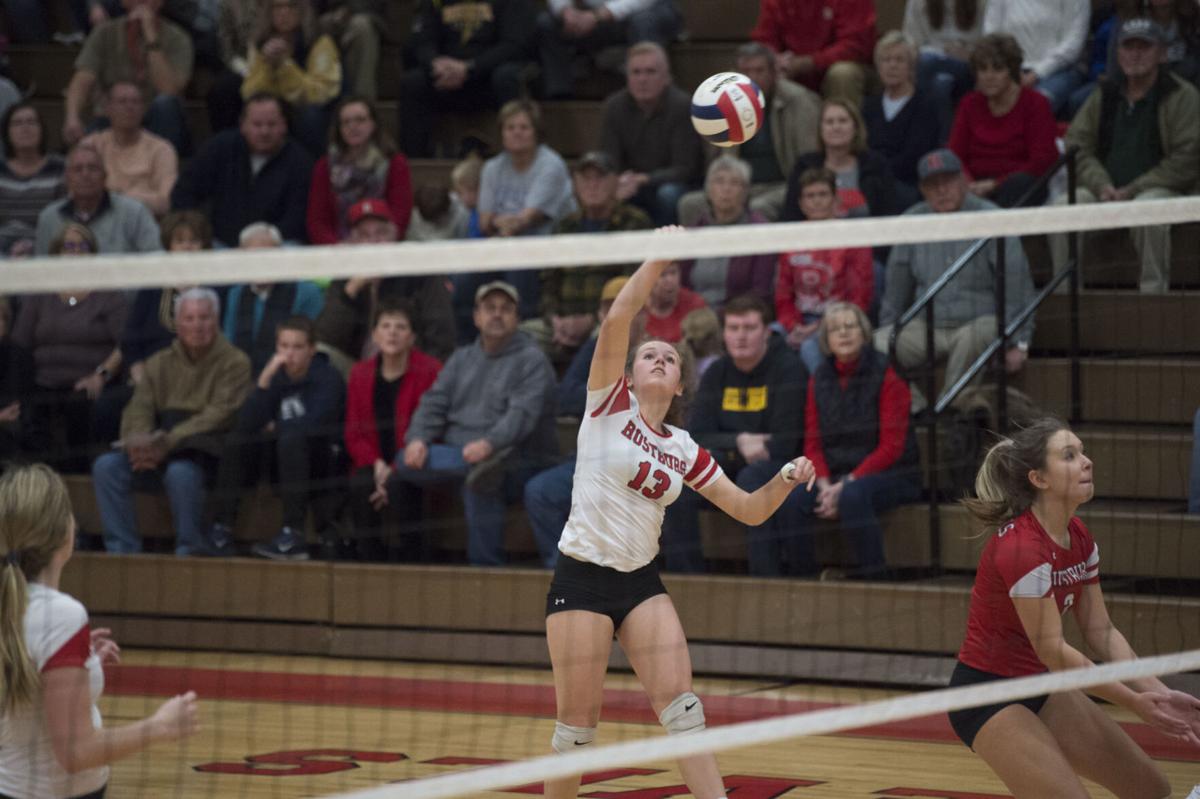 Rustburg’s Eden Bigham hits the ball during a Class 3 state quarterfinal game against Hidden Valley at Rustburg High on Nov. 16, 2019.

Eight area volleyball teams head into region tournaments this week, with seven of them in contention Tuesday night.

RHS has defeated LCA twice this season. The winner plays either No. 4 Monticello or No. 5 Fluvanna on Thursday. As the No. 1 seed, Rustburg has home-court advantage throughout the tourney.

In Region 2C, Appomattox (10-0) took the No. 3 seed despite its perfect season. That region is loaded with strong teams and includes No. 1 Glenvar and No. 2 Patrick County. There are 13 teams in 2C and the top four teams receive a bye, so the Raiders won’t play until the second round Wednesday. They host either No. 6 Floyd County or No. 11 James River (Buchanan). The match time has not yet been announced.

One of the more interesting first-round matchups will take place at E.C. Glass at 6 tonight, as the No. 2 Hilltoppers (10-2) host No. 3 Jefferson Forest (9-3). There are only four teams in the Region 4D field, with No. 1 Blacksburg and No. 4 Pulaski meeting in the other game.

In Region 1B, Altavista (3-8) is part of the four-team field. The fourth-seeded Colonels travel to No. 1 Riverheads tonight for a 6 o’clock game.

The volleyball team at Timberlake Christian took home the Virginia Association of Christian Athletics (VACA) state title Saturday, defeating Danville-based Westover Christian 3-0 (25-14, 25-10, 25-17). The Tornadoes went on a tear this season. They posted a 15-0 record and didn’t drop a single set, winning all 15 matches 3-0.

Virginia Episcopal sophomore Bryce Ledwith has been named one of the top goalies in the country by U.S. Club Lacrosse, which included Ledwith in its Power 20 keepers for the Class of 2023.

The Virginia High School League on Monday released times and dates for this week’s region title games, and there were no deviations from the norm for area teams.

The Pioneers advanced to the region title game by waxing No. 1 Rockbridge in Lexington last week, while LCA dismantled Brookville to advance to the second round for the second straight season. Appomattox overwhelmed Radford in the first round.

While fall sports are currently in the postseason, spring sports are on the way, as practices began Monday. All sports other than tennis begin regular-season events April 26 (tennis starts April 21). Under the condensed regular-season plan the VHSL adopted for 2020-21, baseball and softball play 12-game schedules, soccer and tennis are slated for a 10-game seasons, lacrosse features a nine-game slate, and track and field holds six meets.

After Further Review: Stand by me

It's amazing what can happen when everyone works together. When all that matters is pulling in the same direction for a common cause. When everyone shares in the credit.

There were many game-defining moments for Appomattox (10-0) in Saturday's thrilling Class 2 state championship that ended in a 48-41 ACHS victory over Stuarts Draft. One of those important plays occurred early in the fourth quarter.

To say it's been a breakout senior campaign would be an understatement. It's about more than that. Booker is on a quest, knowing the end of high school is near, to give everything he can, to perfect his craft, to sew his name into the fabric of this program.

STUARTS DRAFT — Keyshawn Baker stood among a sea of white jerseys during Saturday’s postgame ceremony. The burly running back looked at his Ap…

Spring sports get underway for first time since 2019

"We missed outdoor [track] last year. I was mad about that."

Prep scoreboard for Monday, May 3

Tre Lawing, a Raider through and through, leads Appomattox into Class 2 state title game

Runner, thrower, defensive contributor, leader. Basically, the type of durable and resolved guy you want handling the ball in the clutch.

If the Raiders take advantage of Cougars errors, showcase their speed in the open field and get stingy on defense, the title will likely go back to Raider Country for the fifth time in six seasons.

Meah Coles (5) taps the ball over the net during the Class 3 state quarterfinal game against Hidden Valley at Rustburg High School on Nov. 16, 2019.

Rustburg’s Eden Bigham hits the ball during a Class 3 state quarterfinal game against Hidden Valley at Rustburg High on Nov. 16, 2019.