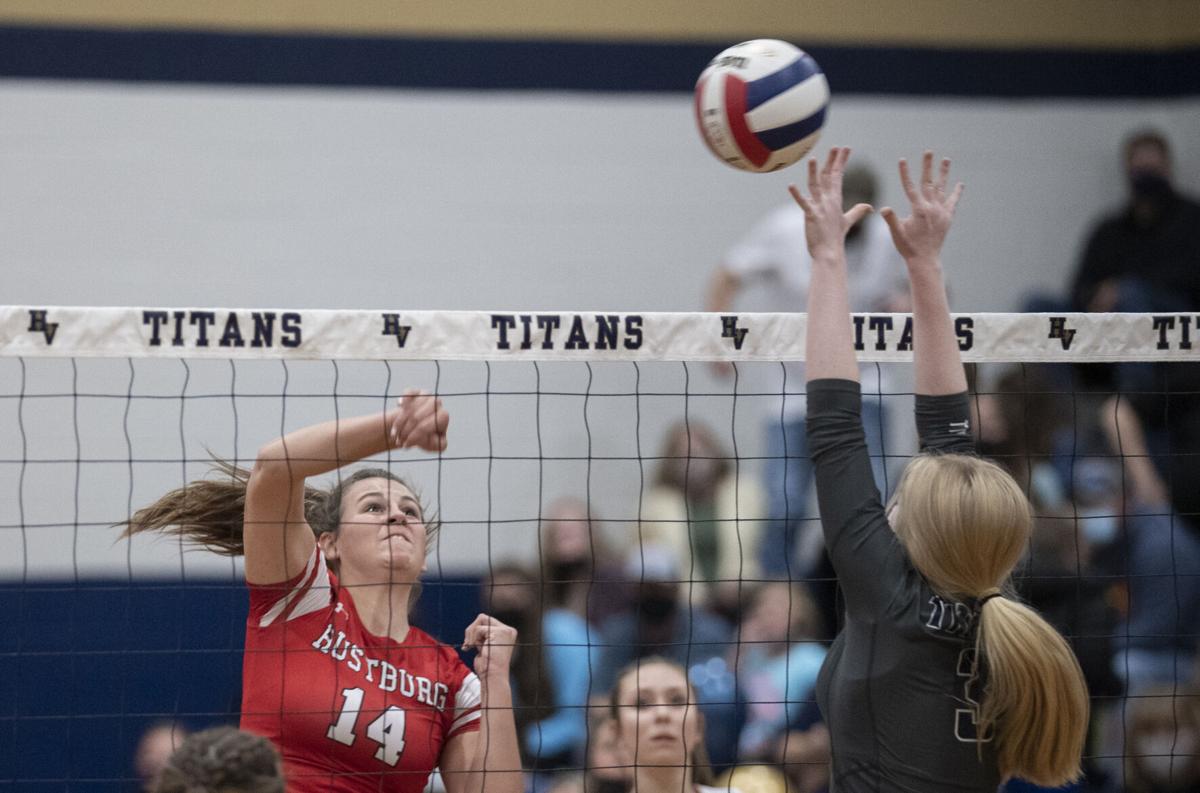 Rustburg’s Nahla Bigham follows through on a spike against Hidden Valley in the Class 3 state semifinals Tuesday. 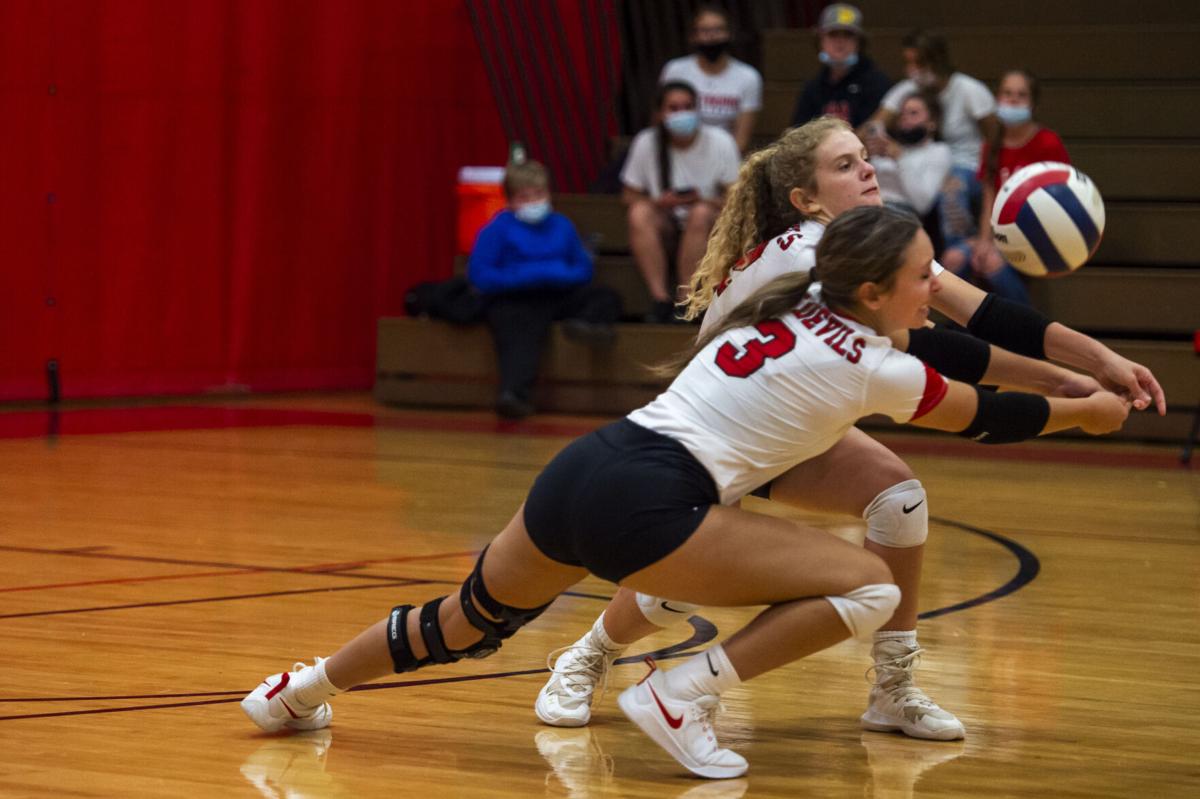 Rustburg senior Delaney Scharnus and sophomore Emma Blankinship converge for a pass during a game against E.C. Glass at Rustburg on Sept. 21. 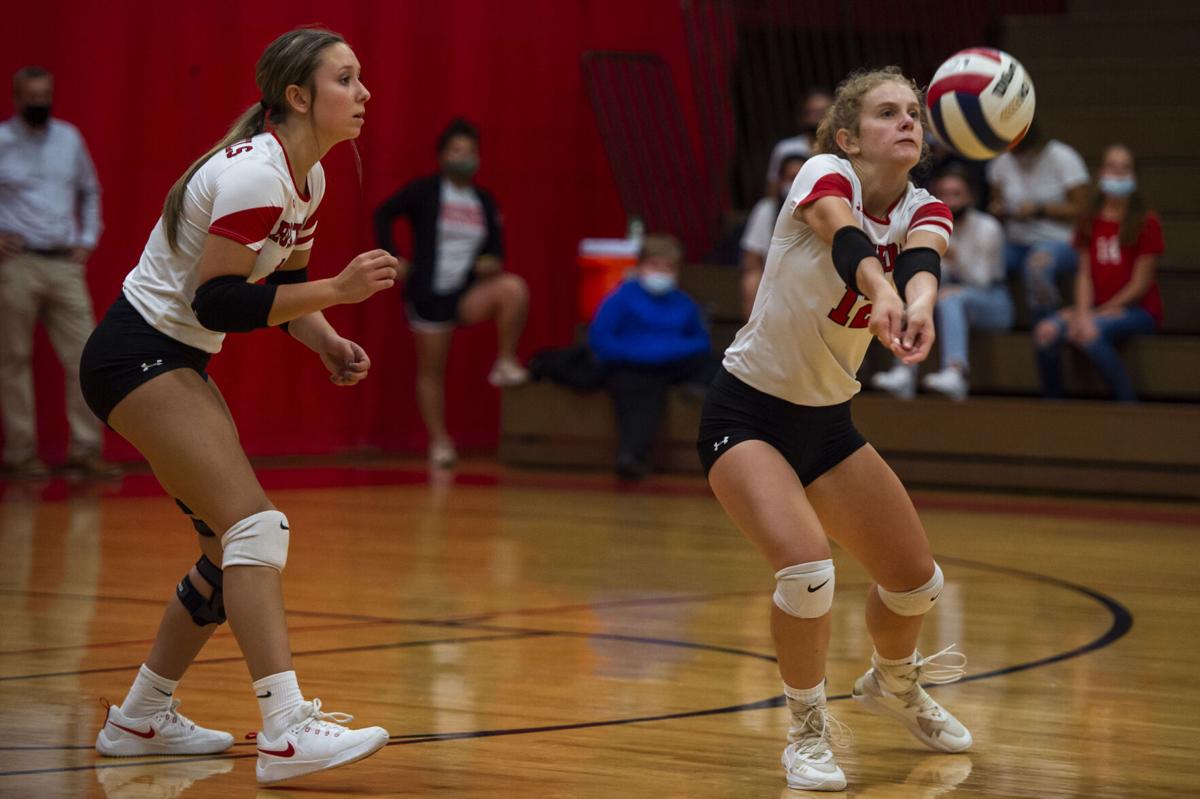 Rustburg sophomore Emma Blankinship (right) bumps the ball during a game against E.C. Glass at Rustburg on Tuesday, Sept. 21, 2021. 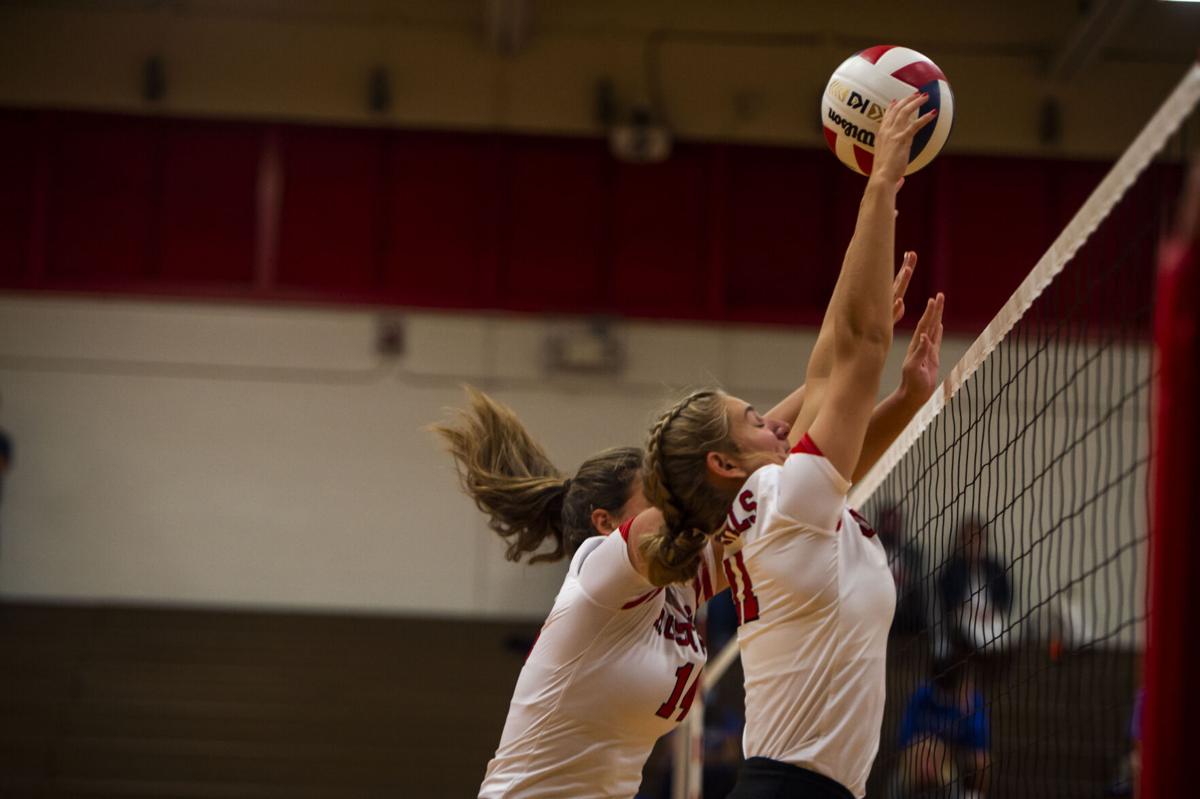 Rustburg junior Reghan Archer and freshman Nahla Bigham attempt to block a spike during a game against E.C. Glass at Rustburg on Sept. 21, 2021. 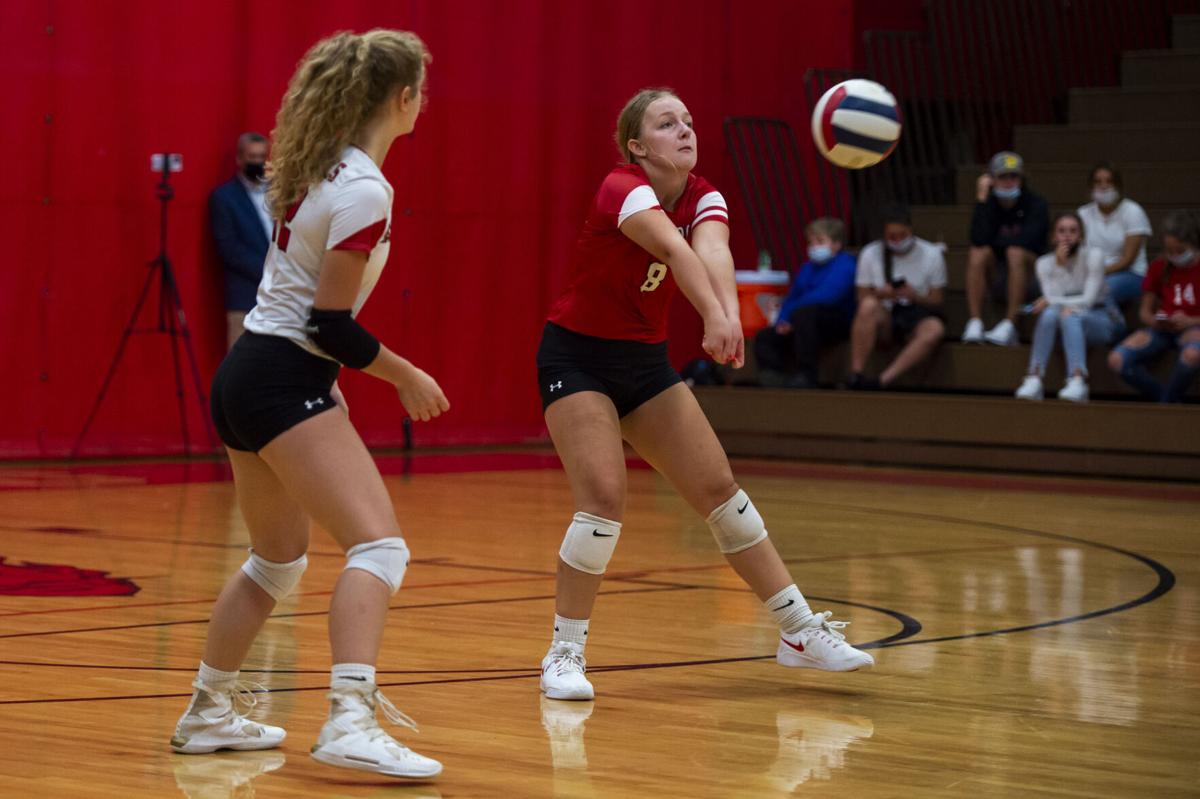 Rustburg sophomore Jenna Bryant bumps the ball during a game against E.C. Glass at Rustburg on Sept. 21, 2021.

RUSTBURG — The stands were tucked away Thursday afternoon at the Rustburg High School gym. The only company the Red Devils volleyball team had was the basketball players hidden behind a curtain of dividers. There were no fans for the squad to play for, no opponent lined up across the net.

The athletes in mismatched T-shirts, though, didn’t need any of that extra fuel. As has been the case throughout the current campaign and each of the past several seasons, competition was conspicuously present.

One example: on either side of the net, two players readying for a drill met in the middle of the court before quickly being surrounded by teammates. Then the two players took on the task at hand, the girls around them hanging on their every gesture, wondering which would win the game of rock, paper, scissors. Cheers erupted on the side of the victor, who’d just secured the right to receive first in the drill.

Winning in any form is worth celebrating, these Rustburg girls believe. Led by a group of five seniors who’ve been playing together since middle school, RHS is one of the most competitive teams around the high school volleyball ranks these days.

“That’s what sports is all about,” senior outside hitter Kate Hardie said. “You wanna be on top.”

The phrase sums up the mindset the Red Devils carry into each day and each game. And with just one match left for RHS — and only a few more sets left in the careers of the quintet of seniors — that mentality isn’t going anywhere.

Rustburg on Saturday will play for the ultimate prize — the Class 3 state championship. Only Tabb (21-8) stands in the way of a second straight crown.

“We know they’re gonna want it. But we also want it,” Hardie said ahead of the 4:30 p.m. matchup at the Salem Civic Center. “And we want it more.”

Credit the Red Devils’ competitiveness for getting them to this point, too. To secure the state title game berth, RHS had to hold off Hidden Valley, a one-loss team heading into their meeting in the semifinals.

That one went to five sets. Rustburg dominated the first two, then gave up their lead with two losses in the third and fourth sets by committing uncharacteristic mistakes. But RHS, coach Kristen Hardie said, “is a group that you just can’t count out at any moment.”

Kate Hardie and the seniors took over in the fifth, knowing they hadn’t come that far to fall short of a chance to play for another trophy. No other volleyball team in RHS history has repeated as champs, their win last season marking the first state title since 1992, when Kristen Hardie played for the Red Devils.

“This is all we talk about, getting to this game,” senior setter Meah Coles said of the upcoming state title match, explaining the conversations that took place heading into the final set in the semifinals. “We’re finally here, and we’re not gonna fall short.”

The Red Devils, Coles said, “were fightin’” at that point, and had gotten back to being consistent. Good passes in serve receive gave Coles the best opportunity at a second touch, and Kate Hardie, more often than any other player, made good on the sets by putting away kills.

The same will be needed Saturday against Tabb, a team that has made it to the title match in three of the last four seasons. The Tigers fell in each of the first two tries to Lord Botetourt, which defeated RHS in the semifinals in those 2018 and ’19 seasons.

Rustburg’s “regular,” Coles added, referring to the baseline abilities and talent the Red Devils (27-1) possess, “is good enough to beat any team.”

RHS is focusing first on executing the way it has in picking up 27 wins this season and 16 in the spring campaign (only dropping one game in an early season tournament in that span).

It starts with serving tough, but limiting service errors. With a boost from younger players Emma Blankinship and Jenna Bryant, Rustburg often gets other teams out of system by forcing a bad or less-than-ideal pass on the other side of the net with its serves.

Then as they receive serve, they’ll count on players like Delaney Scharnus, a senior who will be on the court for the title game for the first time after missing the last with an injury, for a solid first contact. Coles comes in after that, and fellow seniors Eden Bigham, Kate Hardie and Ari Hudson have to play smart as they attack.

The three will have to work around a pair of tall Tabb blockers. Junior Alli Pratt, a middle blocker, checks in at 6-foot-3 and has nearly as many blocks (68) as Rustburg does as a team (78). Senior outside hitter Sarah Callender, the most dangerous offensive threat for the Tigers with 349 kills, is around 6 feet tall.

Limiting Pratt and Callender will be key for RHS, who will look to freshman Nahla Bigham and junior Reghan Archer to get a touch at the net to slow down those attacks.

More simply, Rustburg needs to “play as if [Tabb is] the best team we’re gonna play,” Coles said, and “believe in each other.”

With 82 wins (against just 14 losses) over the past several years as evidence, the Red Devils have found that good things happen when they communicate effectively and showcase the trust they’ve built.

“We are talented and we’re hard-working,” Kate Hardie said, “and we know that we can do it. We stick by each other’s side no matter what.” So seeing that pay off again, like it did last year, would be the perfect way for this competitive group to wrap things up.

APPOMATTOX — Tre Lawing was nearly out of breath as he walked back toward the Appomattox bench. He was a few paces away from being greeted by …

Tayshaun Butler ran for 231 yards, quarterback Drake McDaniel accounted for four scores and Brookville blazed its way into the Region 3C Championship with a 50-21 victory over Heritage.

Rustburg’s Nahla Bigham follows through on a spike against Hidden Valley in the Class 3 state semifinals Tuesday.

Rustburg senior Delaney Scharnus and sophomore Emma Blankinship converge for a pass during a game against E.C. Glass at Rustburg on Sept. 21.

Rustburg sophomore Emma Blankinship (right) bumps the ball during a game against E.C. Glass at Rustburg on Tuesday, Sept. 21, 2021.

Rustburg junior Reghan Archer and freshman Nahla Bigham attempt to block a spike during a game against E.C. Glass at Rustburg on Sept. 21, 2021.

Rustburg sophomore Jenna Bryant bumps the ball during a game against E.C. Glass at Rustburg on Sept. 21, 2021.