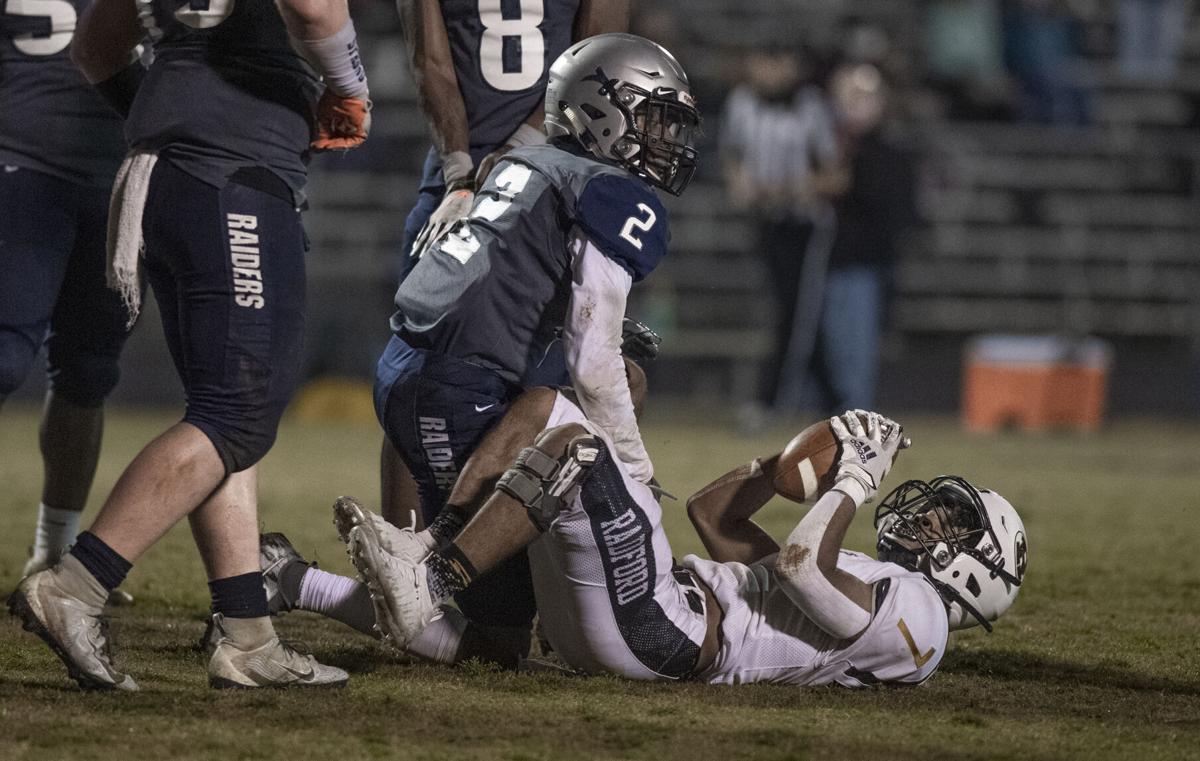 Appomattox’s Tez Booker looks around after tackling Radford’s PJ Prioleau in the first round of the playoffs April 9. 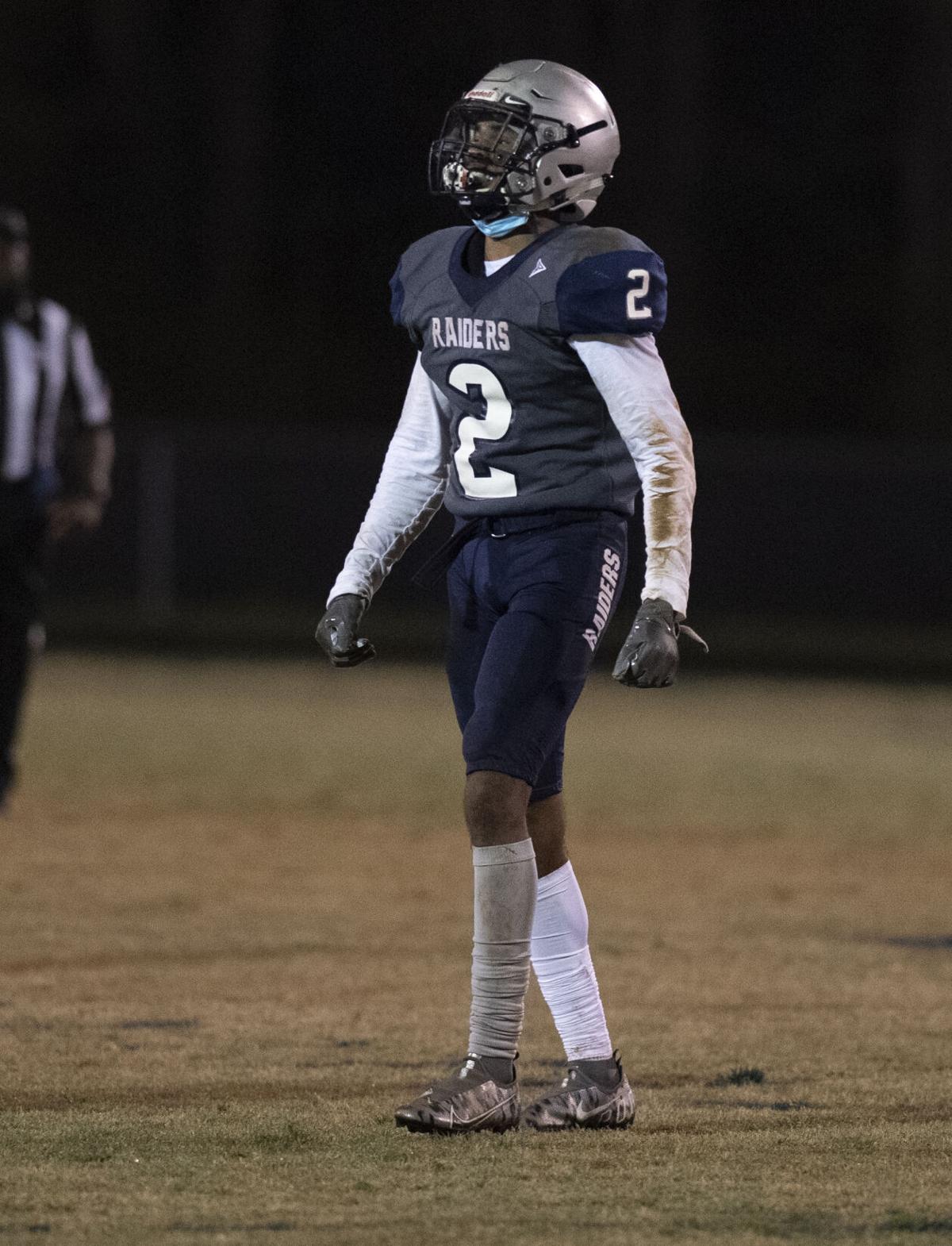 Appomattox senior Tez Booker walks back to the huddle after a play during the opening round of the playoffs April 9. 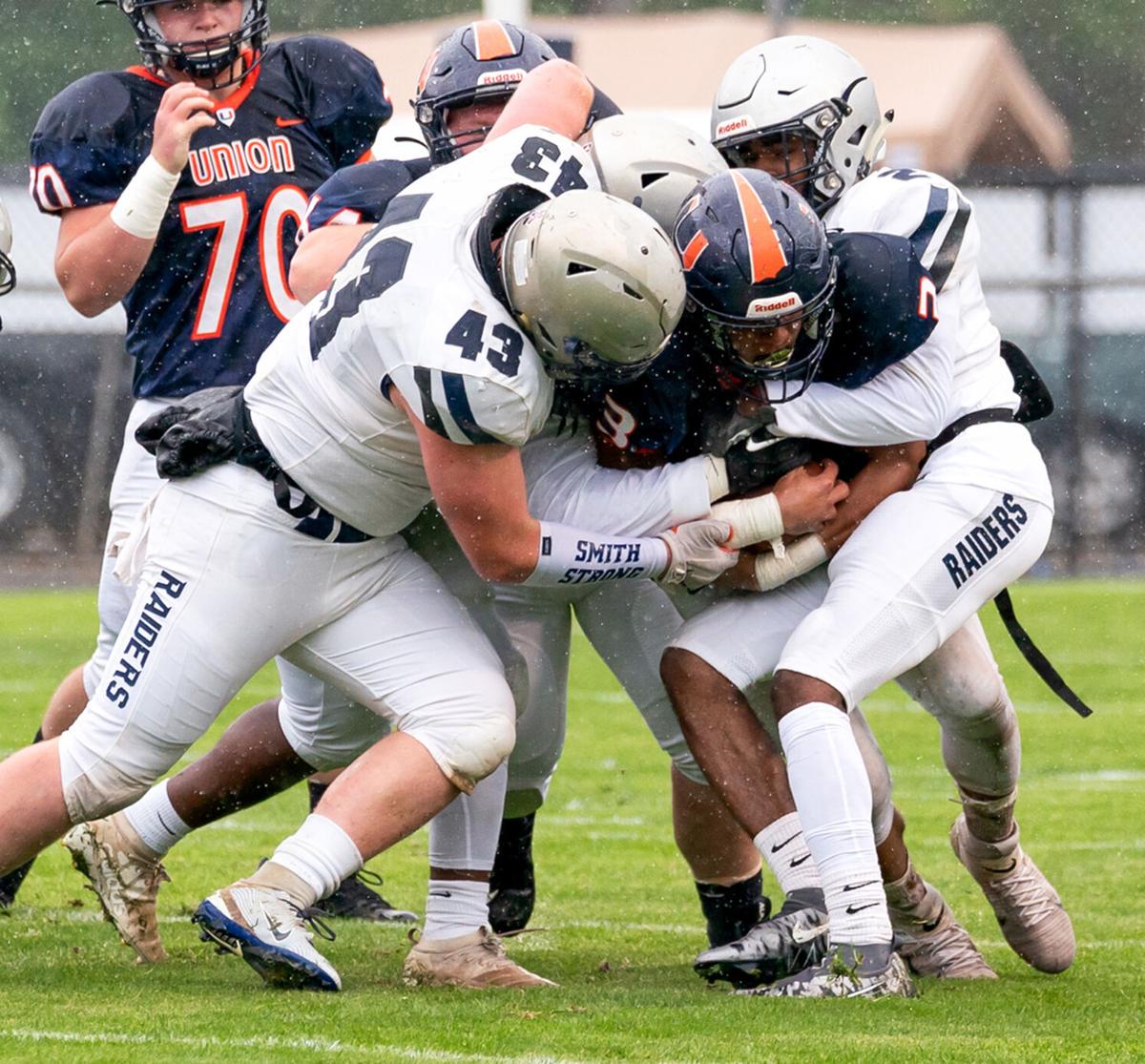 APPOMATTOX — Tez Booker turned on a slight grin and shrugged his shoulders. A reporter was asking him about his speed — the blink-and-you’ll miss him dashes, the shocking breakaways and his ability to read the field, judge the gaps and then breeze past the opposition.

“Nobody can stop me,” he added.

And no one has yet.

For a glimpse at how talented of a football player this 5-foot-11, 148-pound senior is, let’s allow some off-the-chart stats to do the talking.

Five kick returns for an astonishing 320 yards (that’s a 64-yard average) and two returns for touchdowns.

Five interceptions on defense, two of which are of the pick-6 variety. Fifty-three tackles in nine games (second on the team). Two blocked kicks.

On offense, a team-best 191 receiving yards on seven receptions (a 27.3-yard average) and two additional touchdowns.

To say it’s been a breakout senior campaign would be an understatement. It’s about more than that. Booker is on a quest, knowing the end of high school is near, to give everything he can, to perfect his craft, to sew his name into the fabric of this program.

So it’s easy to understand why Tre Lawing, Appomattox’s quarterback, can say with confidence: “He’s a special dude, honestly.”

Booker is one of Appomattox’s most potent weapons, and one Stuarts Draft will have to watch out for in Saturday’s 2:30 p.m. Class 2 state championship, which will be held at Stuarts Draft.

In the 2019 state title game, he intercepted a Stuarts Draft pass and returned it 10 yards to set up Appomattox’s final score of the day, as the Raiders brought home their fourth state trophy in a five-year span.

As a senior, he’s already been part of two state championship teams (2017 as a freshman and 2019 as a junior). Going for a third is special, a feat Booker believes is a combination of the talent Appomattox possesses and the way the program is sometimes perceived by outsiders.

“Honestly, we’ve been slept on,” he said. “Everybody sleeps on us. It’s crazy. ... When [a new season begins] they always think the seniors [from last year] led the team. But little do they know it takes the whole team to come together as one. As the years go on, people step up.”

Booker did just that after quarterback and safety JaVon Scruggs graduated the spring following the 2017 season. Scruggs left an indelible imprint on this program, and Booker wanted to follow in his footsteps.

Now he’s a captain on defense.

“You don’t see many athletes with the speed that he’s got,” Lawing said. “And the way that he uses his speed on defense, flying to the ball, making interceptions, making tackles. Then you’ve got him on offense making defensive backs look horrible.”

Booker and Lawing grew up playing together in Appomattox’s youth league. Back then Lawing was a running back and Booker was quarterback and part-time running back.

“I remember back in the day it always me blocking for him,” Lawing said with a smile this week.

Also part of that youth league group were current players like running back Keyshawn Baker and lineman A.J. Moore.

“Me and Tre used to be in the backfield together just running over everybody,” Booker said about those formative years. “Nobody could stop us. I guess you could call us a dynamic duo. I’ve been growing up with these guys for a long time, ever since primary school. And now the chemistry with our football team is just outrageous because we’ve been playing together so long.”

Booker rose through the ranks quickly once he reached high school. As a freshman he played in two JV games before coach Doug Smith brought him up to varsity. But early that season, against Heritage, Booker suffered a hamstring injury that sidelined him the rest of the year. By the time he was a junior, Booker was providing highlight reels for the Raiders. In 2019, for instance, he finished with a team-high 120 tackles (eight for a loss), 11 pass breakups and one interception return.

That work on special teams this year, though, is otherworldly. It’s rubbed off on his teammates, too. Junior Ervis Davin has amassed 104 yards off just two kick returns and averages 20.6 yards per punt return.

“My blockers, I read their blocks, find the hole, and my speed takes over and then I just score,” Booker said.

He evolved into this type of athlete by holding himself to a high standard. Booker demands perfection, as unattainable as it is. Maybe it’s the pursuit of perfection that keeps him rumbling ahead.

Whether they’re perfect Saturday or not, the Raiders enter with a few advantages, some of which can be tied to Booker: that no-quit attitude and the desire to be the best. Then there’s that blazing quickness.

“Somebody with that speed,” Lawing said, “it’s hard to stop him.”

Appomattox’s Tez Booker looks around after tackling Radford’s PJ Prioleau in the first round of the playoffs April 9.

Appomattox senior Tez Booker walks back to the huddle after a play during the opening round of the playoffs April 9. 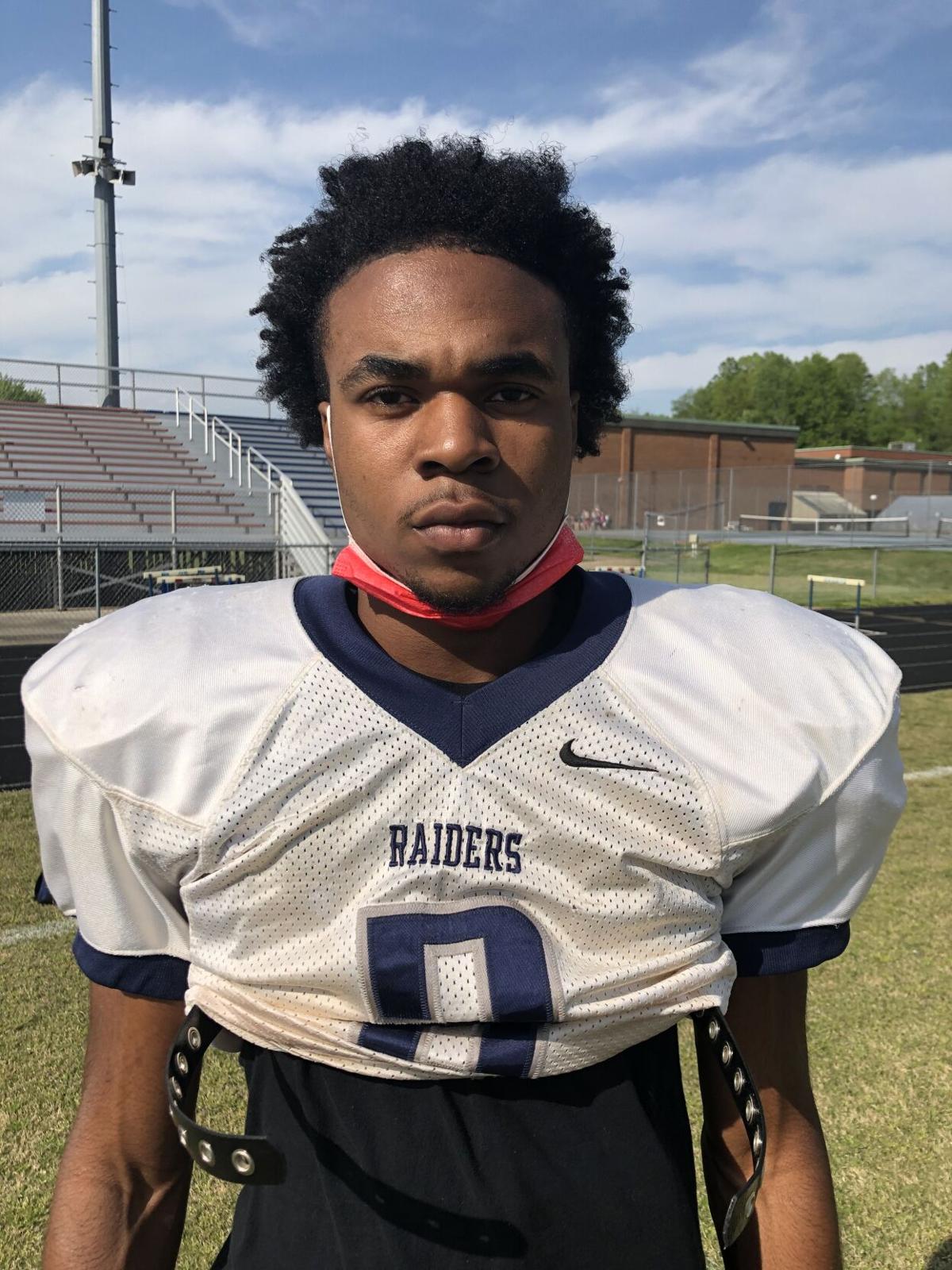