Subscribe
Read Today's E-Edition
Share This
Thomas has turned into major contributor offensively, defensively for E.C. Glass as it readies for region title game
0 Comments
Share this
Presented By 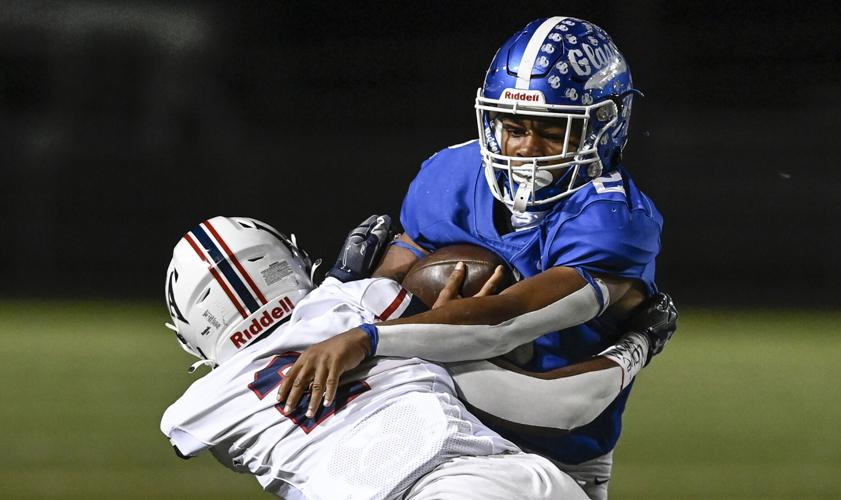 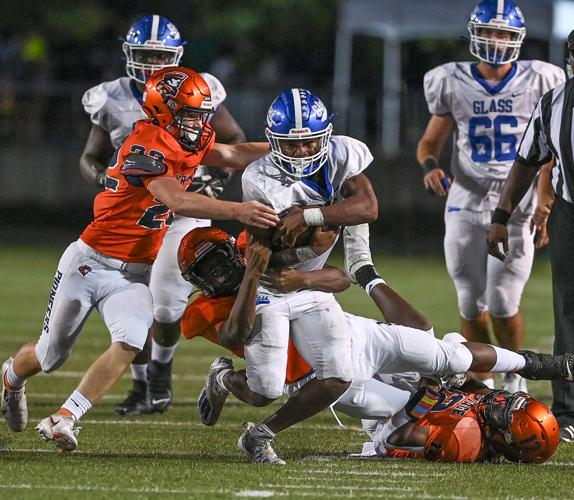 Mike Thomas stood over a teammate during Tuesday’s practice and let his initial thoughts fly.

Thomas, a junior linebacker, watched his fellow defenders break through the opposing offensive line and pull down the running back on the Hilltoppers’ scout team. Within seconds, there was Thomas, offering his blunt commentary on what he’d just seen.

With the same energy-laden tone that comes out on game days, his voice boomed as he looked down at the player on the ground and shouted, loud enough for everyone within 50 yards to hear.

“You just got knocked out!” he offered, an expletive part of the phrase, too.

Thomas’ words weren’t a knock on his teammate for the loss he just took on the carry. They weren’t meant to belittle the effort.

They were, instead, a celebration of the Glass defense, of the result that unit got by understanding exactly what its next opponent – Salem – may offer in the upcoming game.

They were Thomas’ form of encouragement, an outpouring of his personality.

Thomas might be considered the loudest player for Glass. Teammates and coaches have described him as the squad’s most competitive, too.

That’s why, during that practice, his desire to come out on top wasn’t going to take a backseat to anything or anyone – even the brothers he’s toiled alongside for years.

That’s why, four days before he and the top-seeded Hilltoppers were set to face off against the third-seeded Spartans in the Region 4D championship (a game scheduled for 5 p.m. Saturday at City Stadium), Thomas was intensely focused on what it would take to keep alive one of the most successful seasons in program history.

“This game right here is a big game, so me personally, I think it would be a sigh of relief,” Thomas said of the meaning he’s attached to a win Saturday. “I’m not trying to get all the way here and just stop.”

For Thomas, “all the way here” refers both to the journey his team has traveled this campaign and the path he’s traversed over the past several years, on his way to becoming one of the Hilltoppers’ top contributors on both sides of the ball.

Thomas has played linebacker since he was a kid, aside from a short stint at safety. But linebacker, that’s where he wants to be, and has thrived.

On any given night in this season and the last, he’s easy to spot when the Glass defense takes the field. With his combination of strength and quickness, as well as his understanding of the game, he’s able to burst through an opposing line full of physically imposing players and into the backfield to wrap up ball carriers.

In the event an opposing runner earns positive yardage, Thomas often leads the charge for bringing him down to prevent chunk plays. Rarely this season have opponents tested the Glass secondary.

“I feel like defense, I’ve showed a little bit,” Thomas said, explaining that aspect of the game is where he feels like he’s been most successful over the past couple years.

Proof for that assertion can be found in the defensive numbers Glass has put up this season. Through seven weeks, the Hilltoppers never surrendered more than two scores. And through 12 games, Glass allows opponents to average just 12.3 points per contests.

Ask his teammates and coaches about Thomas’ most significant offerings, though, and you’re likely to get answers that are a little different than his.

“He’s more important to us on both sides of the ball,” coach Jeff Woody said, laughing when he thought about how he couldn’t choose how Thomas contributes best.

“I think he plays defense a little bit like he plays offense,” White said. “He sees gaps, he shoots gaps, and that’s very similar to what he does at running back.”

While Thomas thinks his success on the defensive side fuels his offense, lately, White believes Thomas’ work from the backfield has been a spark for his work on the other side.

Thomas is one of the main reasons Glass’ approach offensively has changed from a year ago — for the better. Last season, White was the hero on more than one occasion thanks to his passing ability. This year, Glass’ game plan looks more balanced.

“That’s just made everything else so much more open,” White said.

In the run game, it’s been Thomas who’s been the biggest name opponents worry about. In last week’s region semifinals, he eclipsed the 1,000-yard mark on the season.

Recently, he went back and watched film from one of those games, perhaps because it represented a significant jump in his offensive production. In that Week 8 contest against Rustburg, he rushed for a career-high 182 yards and his first career 100-yard game.

“I just felt like we were getting to the time where it was about to be playoff time, so I had to kick it up,” Thomas said.

Then he added a few more words to that thought. At that point, he said, he wanted to “prove to myself” he could be a go-to guy on offense, just as he has been on defense.

“I always tell people that I have the best view of Mike because I can see right behind him [aftering handing the ball off]. Mike is the best player I’ve probably ever seen in person, other than Eli Wood,” White said, referencing the Glass standout athlete and receiver who graduated in the spring and is now a walk-on on the University of Virginia football team. “He hits the hole almost perfectly every time. He rarely misses, … and then even when he does, he breaks so many tackles that he makes everybody look right.”

Thomas, at 5-foot-8 and 180 pounds, isn’t especially big, but he is able to pick up tons of yards after an initial hit, oftentimes dragging a hoard of defenders with him until enough opposing players can join in and overpower him.

His size should be a factor defensively, too, since he’s smaller than a lot of linebackers. But he doesn’t let that keep him from stymieing opponents, racking up tackles and energizing the rest of his team.

Ultimately, that’s who he’s playing for. With a do-or-die game ahead, a win, rather than individual accolades, is all that matters to him right now.

“Anything to help us get the dub,” Thomas said.

Heritage gets revenge on LCA to claim Region 3C championship

Heritage got the revenge it was looking for against LCA, which had won the last three in the series, and also dashed the Bulldogs' hope for a third-straight region title.

Saturday will be 'monumental' day at City Stadium as Heritage and E.C. Glass play in state semifinal doubleheader

For the first time, football programs at E.C. Glass and Heritage both will host state semifinal matchups, creating a twin billing at Lynchburg City Stadium.

“It’s what the build has been [about]. The rebuild, the process."

Brad Bradley was named region coach of the year. His Pioneers currently are 11-2, are winners of six straight games and have now earned six region titles in his 11 years as the school's head coach.

Christmas, who made Amherst his final stopping spot with a stint that lasted four years, amassed more than 300 wins during his career as a head coach.

It’s hard to slow down Jackson Moore. That’s not because the E.C. Glass junior is the fastest guy on the football team. But anyone who knows Moore knows the description is appropriate, whether applied on the gridiron or off.