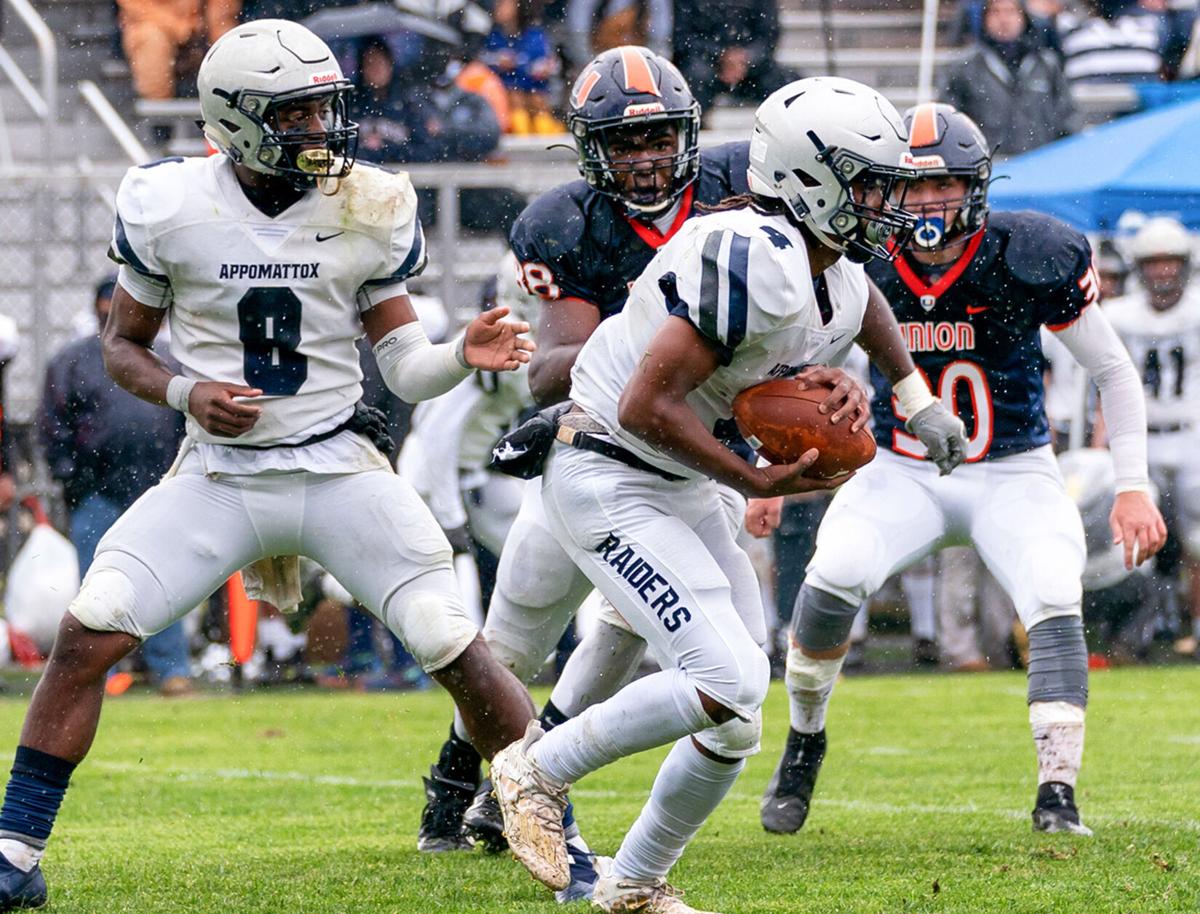 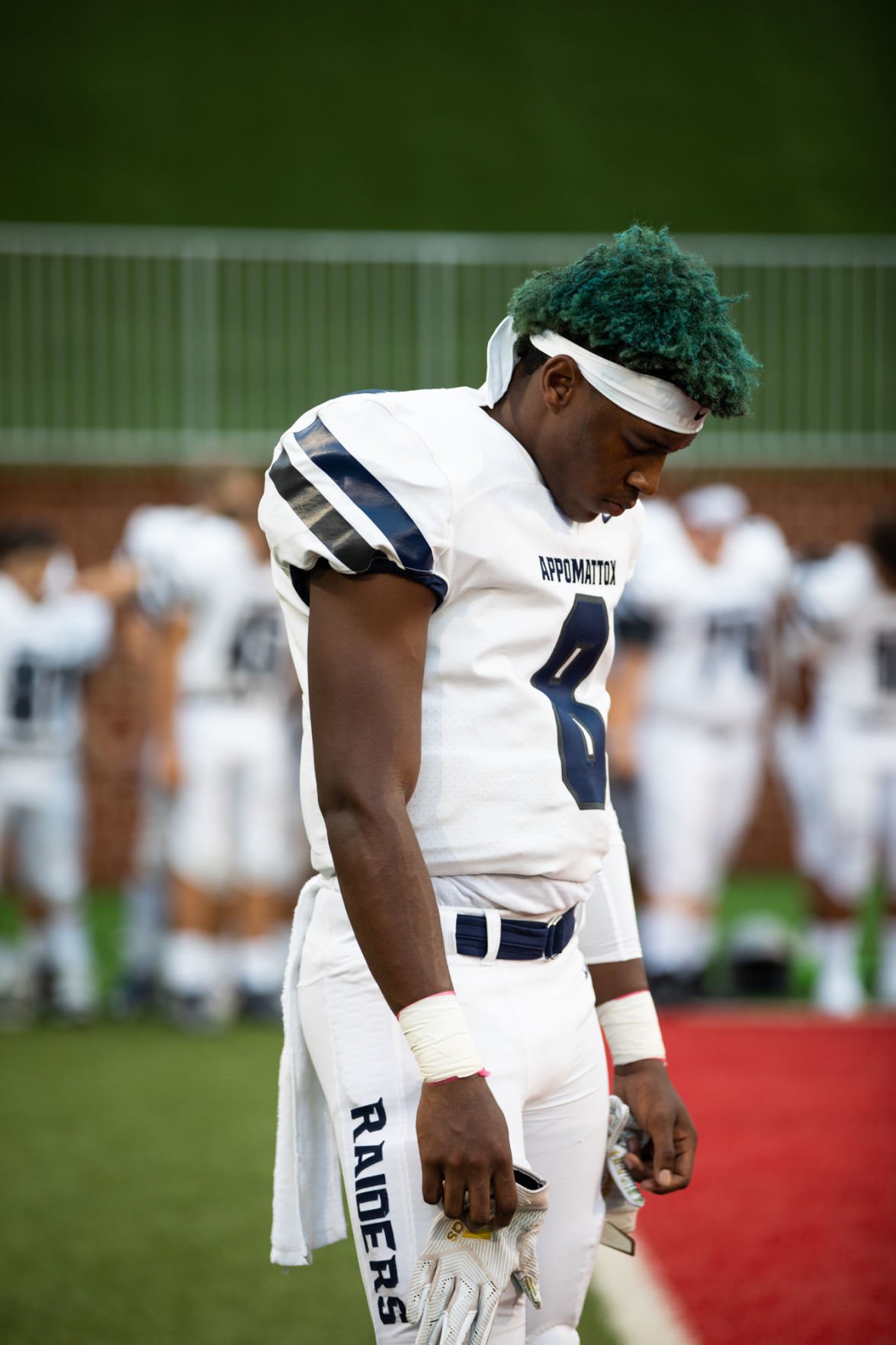 Appomattox quarterback Tre Lawing bows his head during a prayer before a scrimmage against Liberty Christian Academy in 2019. 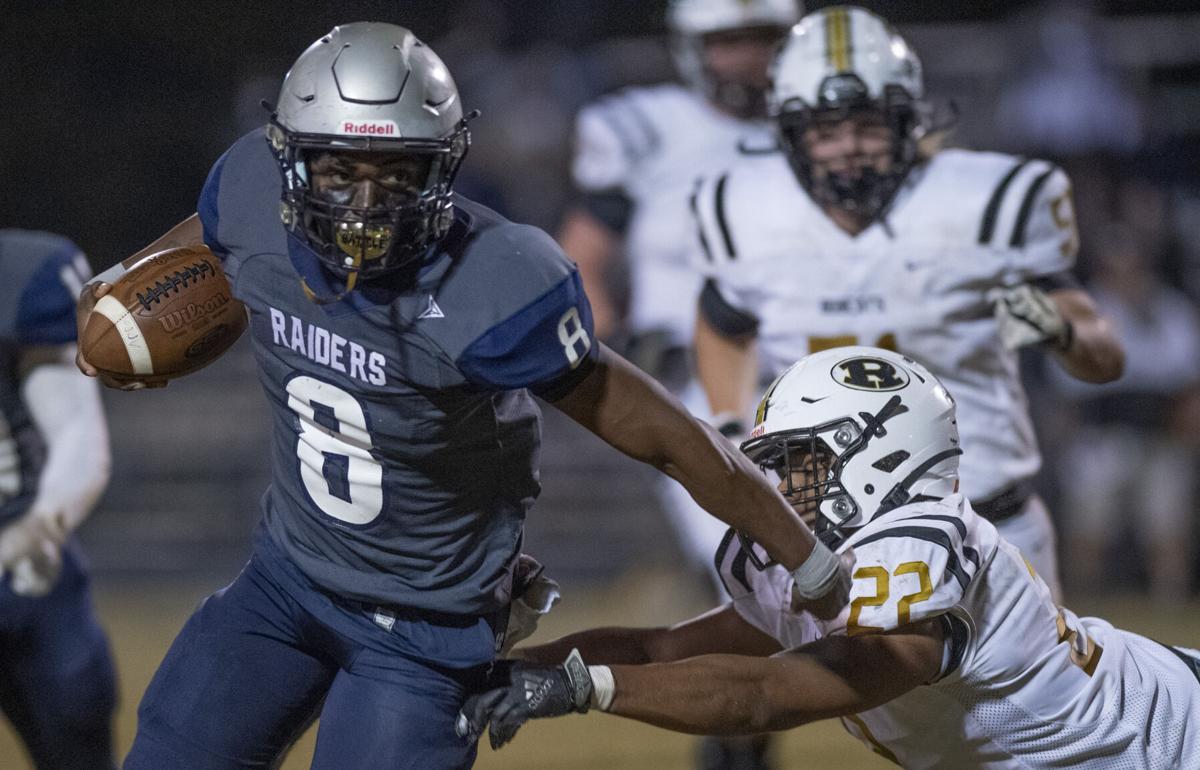 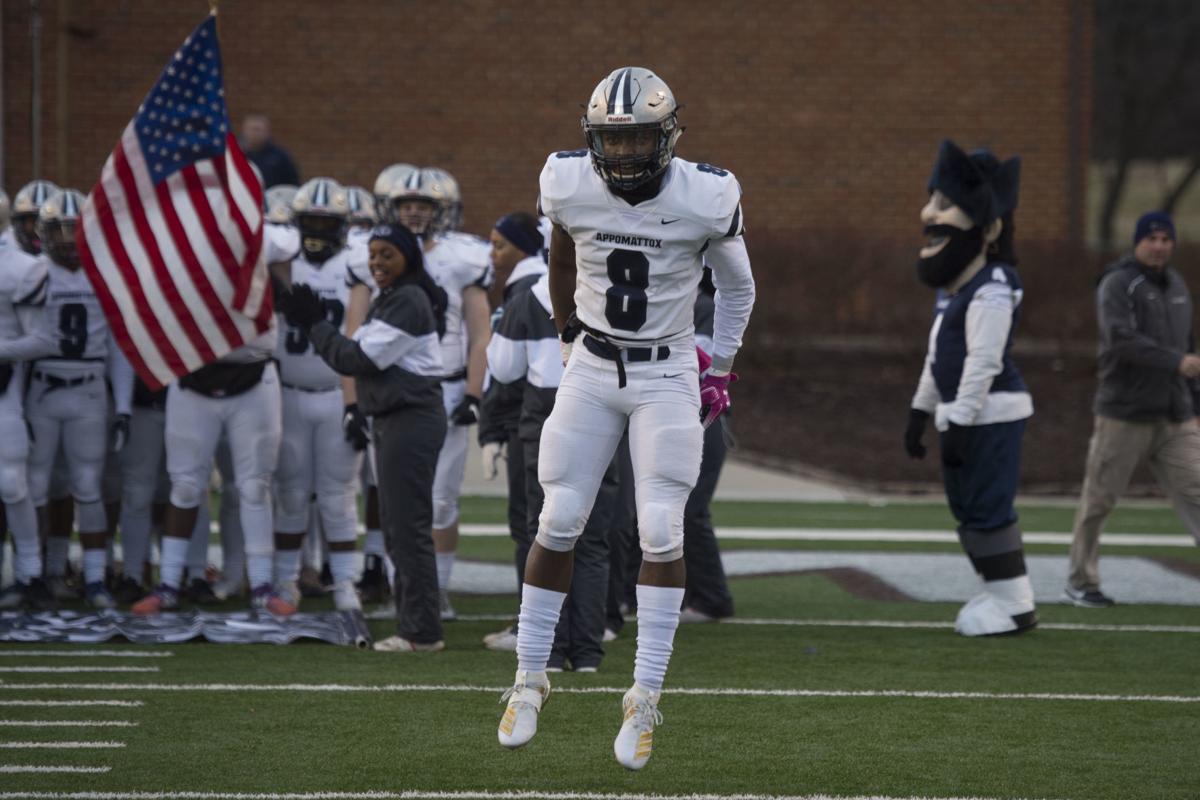 Tre Lawing, No. 8, gets hyped up before the Class 2 State Championship at the Salem Football Stadium in Salem on Dec. 14, 2019. 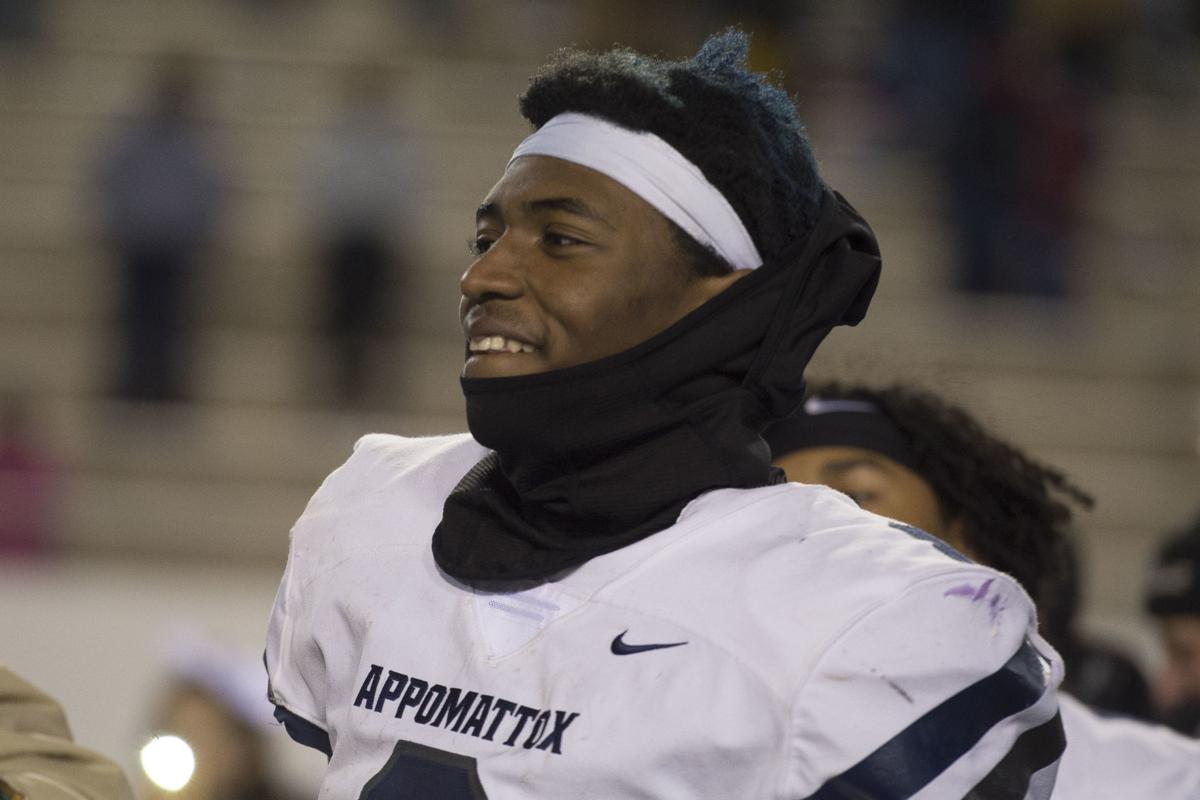 Tre Lawing at the Class 2 State Championship at the Salem Football Stadium in Salem on Dec. 14, 2019. 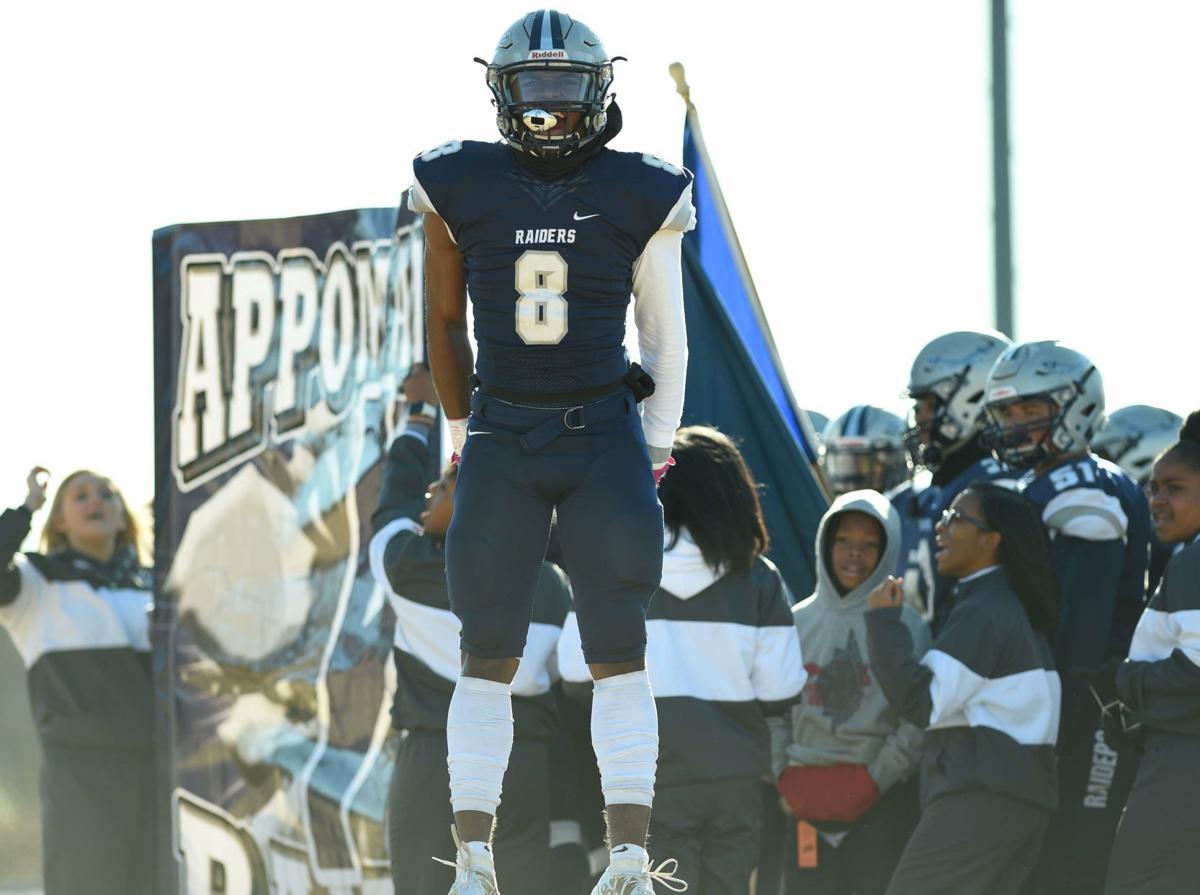 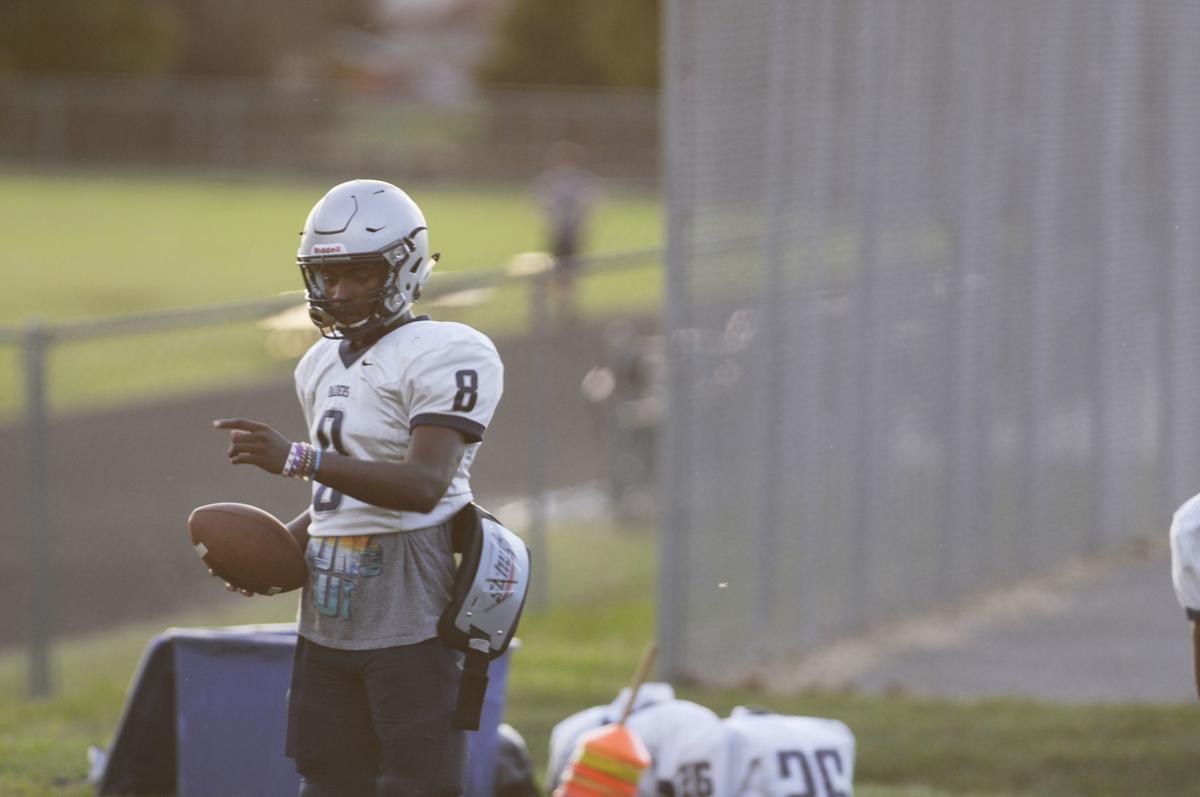 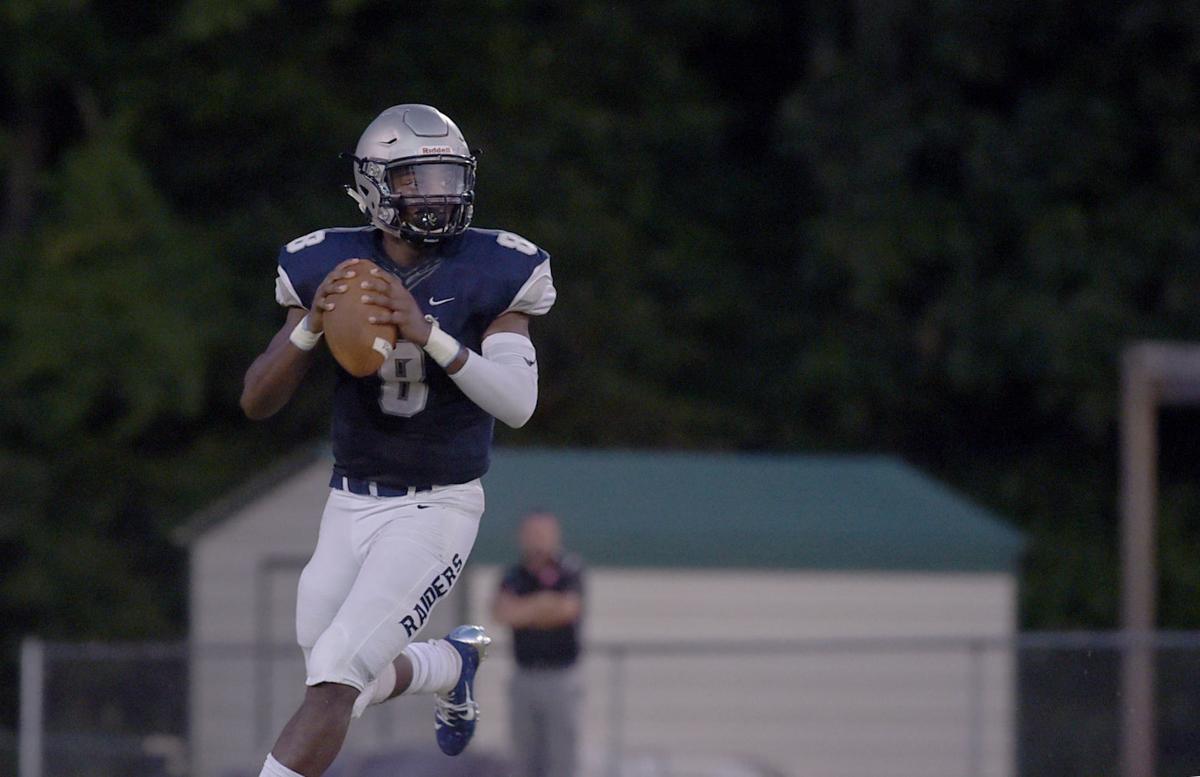 Appomattox quarterback Tre Lawing looks to throw during the Raiders' win over Rustburg at Appomattox County High School in September 2019.

APPOMATTOX — Long before he started high school, there was talk around this town about Tre Lawing and how he might be the next up-and-coming star in Raiders Country.

As a seventh grader, he was a running back. Always had been. Coach Doug Smith changed all that the first time the two met.

“He wanted me to change to quarterback,” Lawing recalled at Tuesday’s practice as the Raiders prepared for Saturday’s Class 2 state championship game against Stuarts Draft. “I told him I’d never played quarterback a day in my life. And ever since then, he’s been working with me.”

The switch paid off for Appomattox. Lawing, a junior, has put up startling numbers the last two seasons as he’s come into his own. The signal caller — who started at QB as a freshman in 2018 — has lost just four times in his high school career, put on a show in the 2019 state championship game and buoyed the Raiders this season as an upperclassman.

Runner, thrower, defensive contributor, leader. Basically, the type of durable and resolved guy you want handling the ball in the clutch. He is all those things, complete with an ever-present blue tint running through his hair — whether he sports an afro or tight cornrows, as he does currently — that serves as a message: this young man bleeds Raider Blue.

“He’s been a really good worker for us,” Appomattox interim head coach and defensive coordinator Stephen Castello said. “He’s one of the guys who’s been consistently in the weight room in the offseason putting in work, and he goes to the gym on his own a little bit, too. He’s a very good athlete, which is why he was able to get on the field as a freshman, and he’s continued to build on that.

Appomattox exited the playoffs in the Region 2C championship in 2018. The following year Lawing finished with 1,235 passing yards, 1,079 rushing yards and 39 total touchdowns (20 passing, 19 rushing). He also accounted for four touchdowns and rushed for 121 yards to help Appomattox claim the ‘19 state title over Stuarts Draft.

In this pandemic-shortened season, he’s rushed for a team-high 541 yards, passed for another 499 and scored 24 touchdowns (14 rushing) while also contributing with 42 total tackles (29 solo) and four tackles for a loss on defense.

But Lawing isn’t really concerned about stats. He’s more focused on helping his team play as one unit and doing everything he can to earn the win each week.

In that sense, the old message lives on in his heart — “Power of One,” the often-mentioned slogan the Raiders adopted in 2015, when it won its first of four state titles.

“Playing as one, honestly,” Lawing said when asked what has made the program so special in recent years. “When you step onto this field and you’re playing as a team, you know that this is a family. Everybody’s playing together. We’re doing it for each other and Smith Strong.”

That saying, sometimes used as the hashtag #SmithStrong, has been a guiding force for Appomattox (9-0) in 2021. Coach Doug Smith, who has been undergoing treatments for multiple myeloma, isn’t present at games. Instead, he coaches remotely. Players have dedicated the season to him.

Lawing and his fellow players sat in the school’s cafeteria last fall when Smith broke the news about his cancer diagnosis.

“We knew he was going through some things, but we didn’t know it was this bad,” Lawing recalled. “As soon as he told us, all I could do was break down in tears. Coach Smith, to a lot of guys out here he’s a father figure. Everybody out here looks at him as more than just a coach. We look at him as someone we can go talk to. If you’re having a bad day you can always go talk to this man. Every day we give our all just for him because we know if he was here he would be doing the same thing for us.”

Smith and Lawing spent countless hours working together over the years. “We built a relationship, a bond that can’t be broken now,” Lawing added.

Stuarts Draft (8-1) knows it needs to key in on Lawing when the two teams meet again in Saturday’s 2:30 p.m. title game at Stuarts Draft. That’s easier said than done. Lawing ripped off an 80-yard TD run to effectively seal the 2019 title game, and he spent the offseason working on his speed, throwing ability and communication skills. Plus, he has a stout offensive line, led by guys like Jacob Williams (5-foot-10, 220), Bronson Williams (6-0, 239) and Quamea Gray (5-10, 250).

The group put together what Castello refers to as its best run-block effort in last weekend’s state semifinal against Union. That type of stellar play opens up opportunities for Appomattox’s multiple offensive options.

“We have a lot of guys who can get the job done,” Lawing noted. “If you can get them the ball, they can make plays.”

The quarterback who started playing football at age 6 in Appomattox’s youth league will be called on to make a few more big plays this season. Do that and the Raiders can bring home their fifth state trophy in six seasons.

“I’m just gonna give everything I’ve got to this program for the rest of my time, this week and my senior year,” Lawing said. “That [passion], that’s something I don’t want to lose.”

Look to the Chargers and Seahawks to make the playoffs

Appomattox quarterback Tre Lawing bows his head during a prayer before a scrimmage against Liberty Christian Academy in 2019.

Tre Lawing, No. 8, gets hyped up before the Class 2 State Championship at the Salem Football Stadium in Salem on Dec. 14, 2019.

Tre Lawing at the Class 2 State Championship at the Salem Football Stadium in Salem on Dec. 14, 2019.

Appomattox quarterback Tre Lawing looks to throw during the Raiders' win over Rustburg at Appomattox County High School in September 2019.