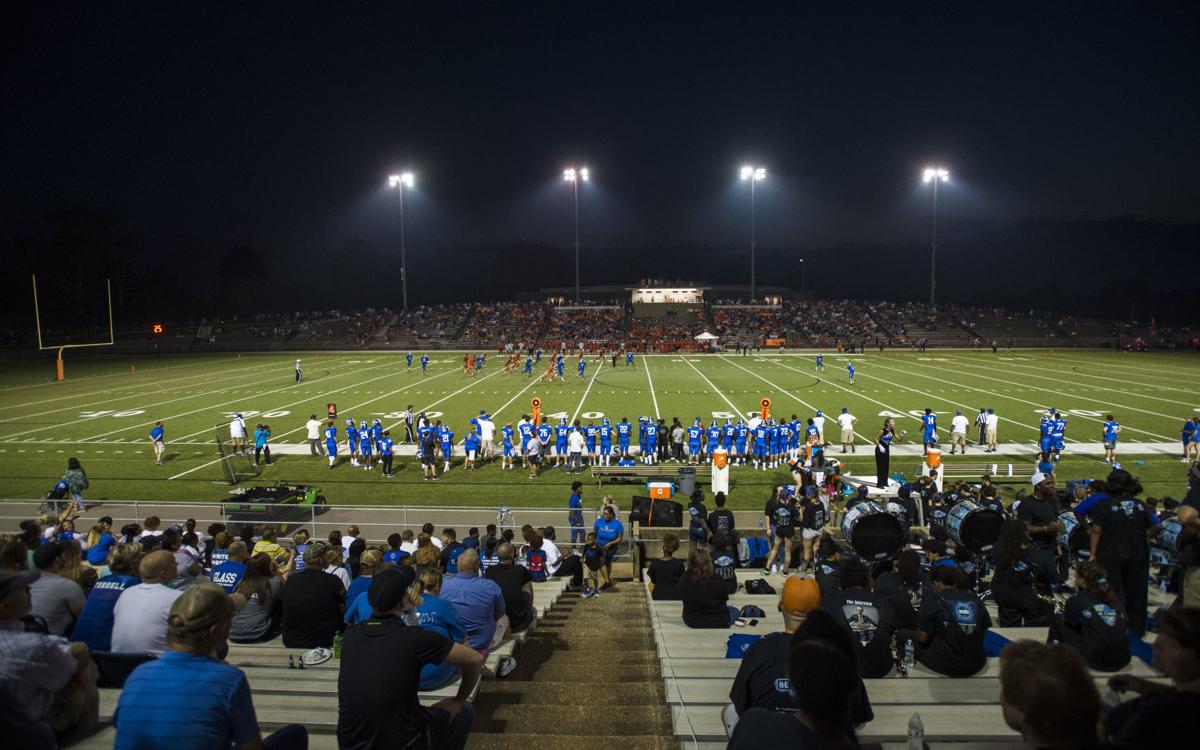 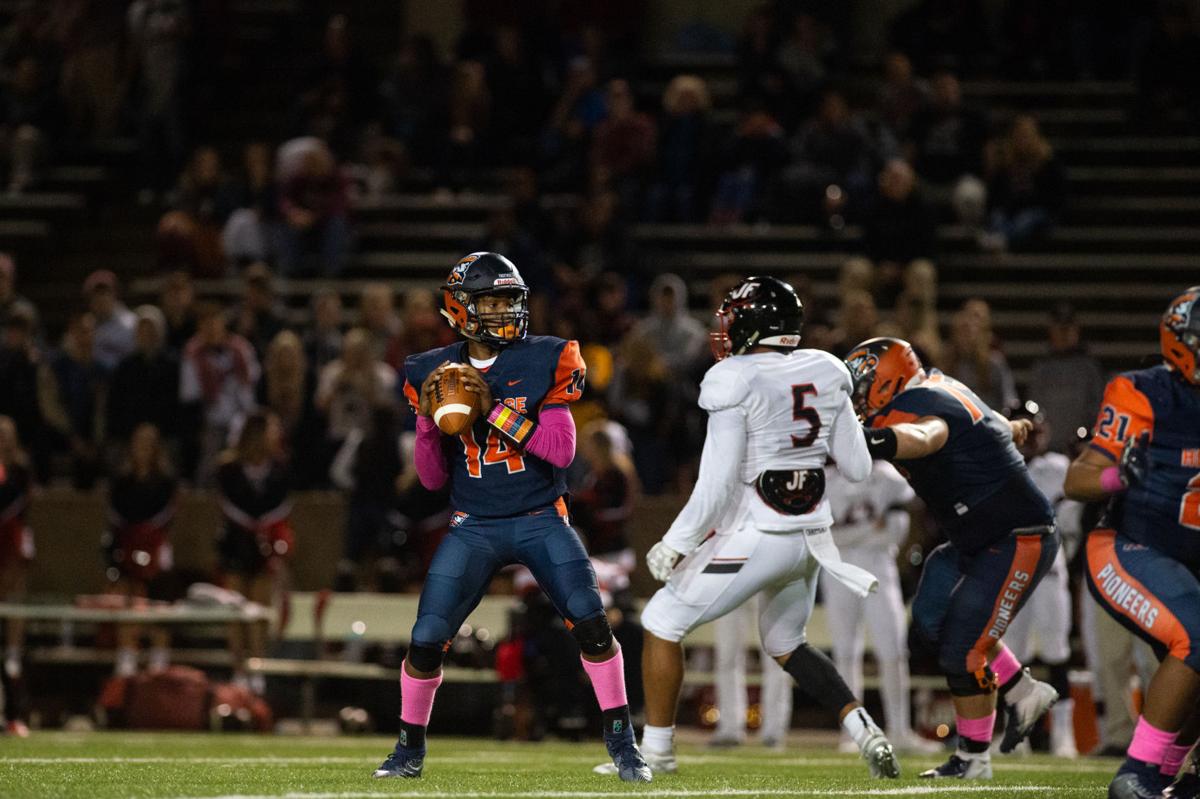 Heritage quarterback Kameron Burns looks for a pocket to throw the ball during the game against Jefferson Forest on Friday, Oct. 25, 2019 at Lynchburg City Stadium.. 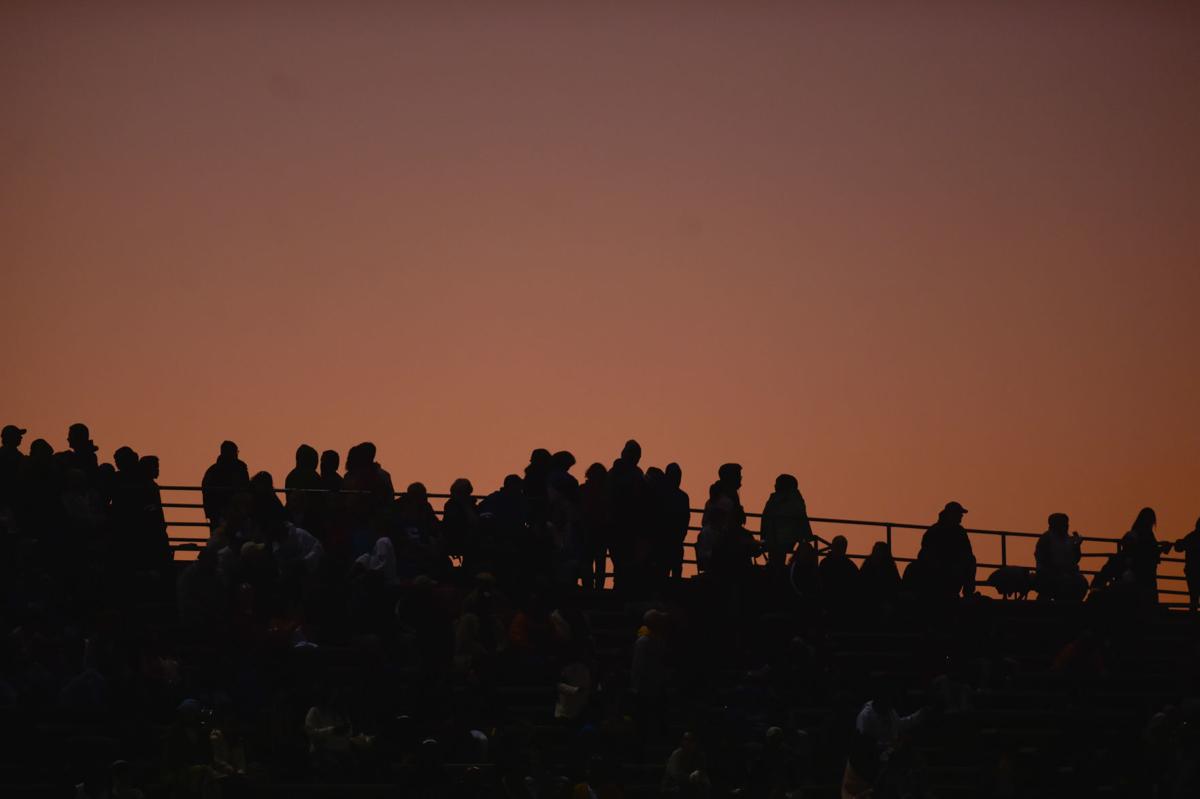 Spectators wait from the stands before the beginning of the game between Heritage and E.C. Glass on Friday Nov. 1, 2019 at City Stadium.

Under Virginia’s Phase 3 plan, no more than 250 people can attend high school sporting events. The league, McCall said, will ask Northam’s office to increase that number to 1,000 for both indoor and outdoor events.

“We’re hopeful that they’ll increase it a bit,” McCall said.

High school sports are currently designated as “recreational sports” under the state’s Forward Virginia: Phase 3 Guidelines. Those guidelines say “the total number of attendees (including both participants and spectators) of recreational sports cannot exceed the lesser of 50% of the occupancy load on the certificate of occupancy, if applicable, or 250 persons.

“For sports played on a field, attendees are limited to 250 persons per field.”

The VHSL hopes the state will instead place it under the “Entertainment and Public Amusement” section of reopening, which includes sports venues. That section allows for 1,000 patrons at events like college football games.

VHSL Executive Director Billy Haun began asking Northam’s office last month to consider allowing the league to operate under the 1,000-person limit. The league’s executive committee finalized its return to play plan, known as “Championships + 1” on Sept. 17, paving the way for sports to begin in a condensed format in late December.

“The governor’s office has been really good to work with throughout the entire process,” McCall said.

Ultimately, McCall added, local school boards can chose whether to allow the maximum number of spectators at athletic events. So far, there is no indication school boards in Lynchburg or the counties of Appomattox, Amherst, Bedford, Campbell, Pittsylvania or Nelson would further limit the number of fans allowed at high school sporting events.

Season 2 includes football, golf, volleyball, cross country, field hockey and competition cheerleading. It begins Feb. 4 and wraps May 1 (first contest date for football is Feb. 22 and March 1 for other sports).

Season 3 (baseball, lacrosse, soccer, softball, tennis and track and field) runs from April 12 through June 26, with the first contest date being April 26.

Each sport will be limited to just 60% of its normal schedule. For instance, football teams will play six regular-season games instead of 10.

Notes: The league’s ad hoc committees could soon present ideas to the league’s membership about changing football state championship venues and about moving to a four-class system for 2022-23. The league will not take action on either item, McCall said, but will hear concerns from the committees. … For football, the ad hoc committee will present an idea about securing neutral high school sites for state championship games should Salem Football Stadium (Class 1 and 2), Liberty University (Class 3 and 4) or Old Dominion University (Class 5 and 6) become unavailable because of the coronavirus pandemic. … The discussion of abandoning the current six-class system across all sports and moving to a four-tier class system would be applicable in the next four-year cycle, should the VHSL’s membership chose to further explore the idea.

Heritage quarterback Kameron Burns looks for a pocket to throw the ball during the game against Jefferson Forest on Friday, Oct. 25, 2019 at Lynchburg City Stadium..

Spectators wait from the stands before the beginning of the game between Heritage and E.C. Glass on Friday Nov. 1, 2019 at City Stadium.