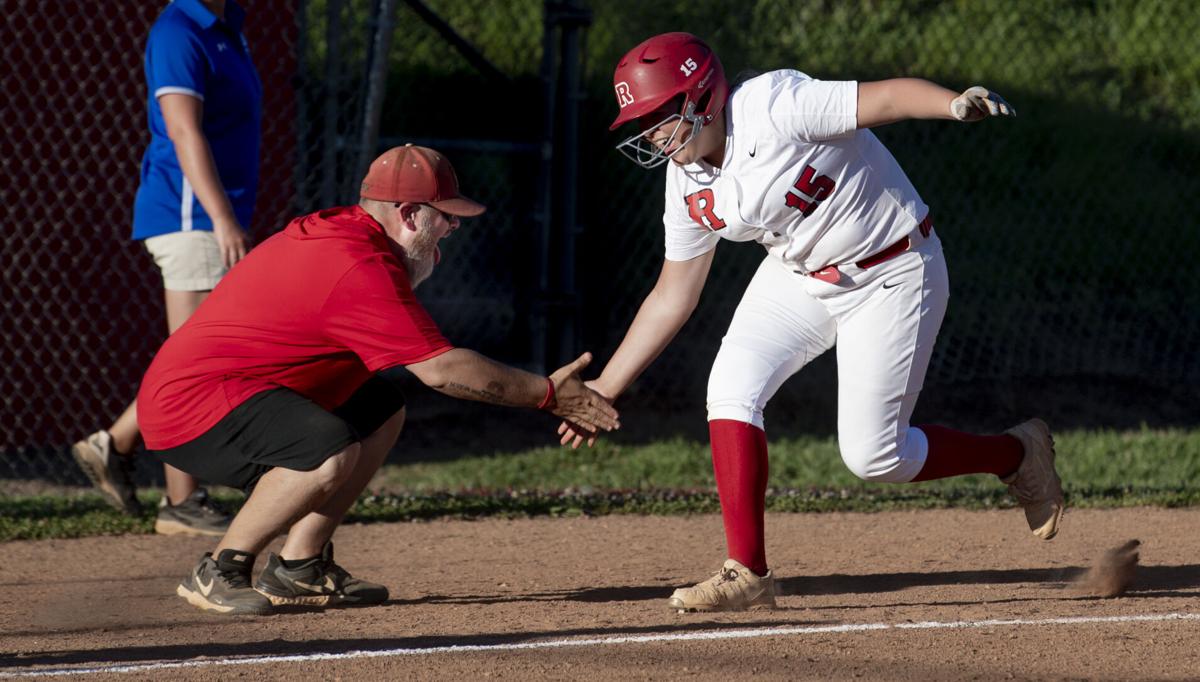 Rustburg’s Katie Donald gives her assistant coach Jason Hudnall a low-five after she belted a grand slam to end the game against Spotswood by a 12-0 “mercy rule” score. 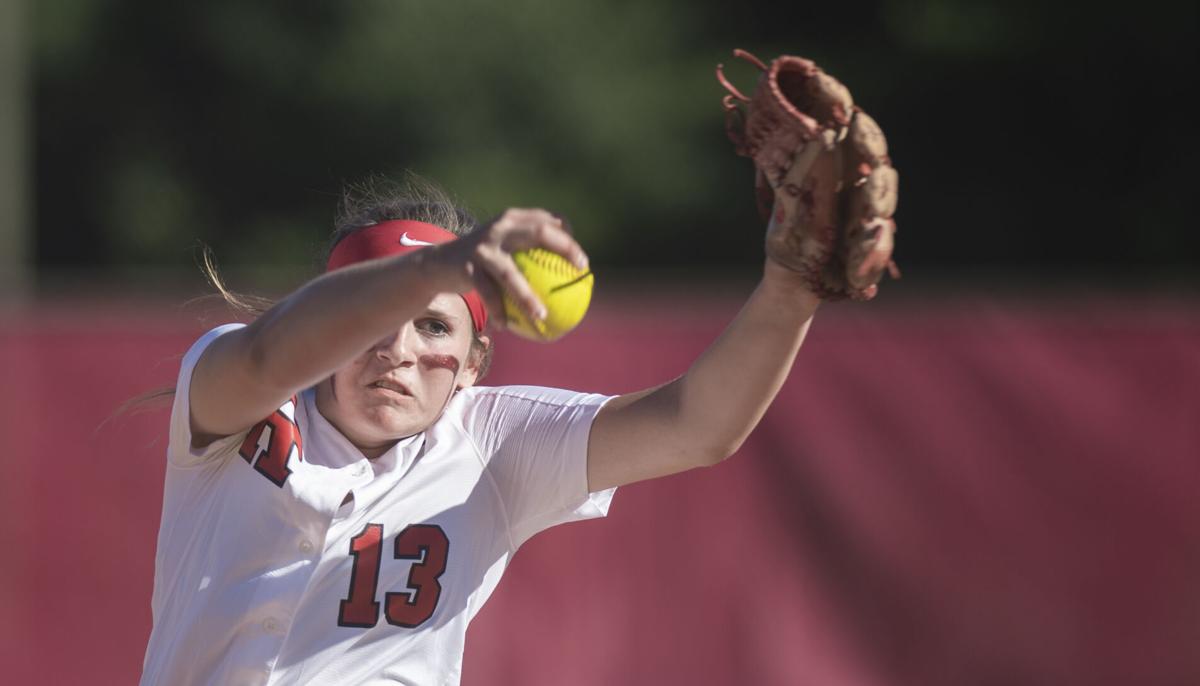 Rustburg pitcher Eden Bigham winds up to deliver a pitch against Spotswood. Bigham struck out 16 and lowered her ERA on the season to 0.10. 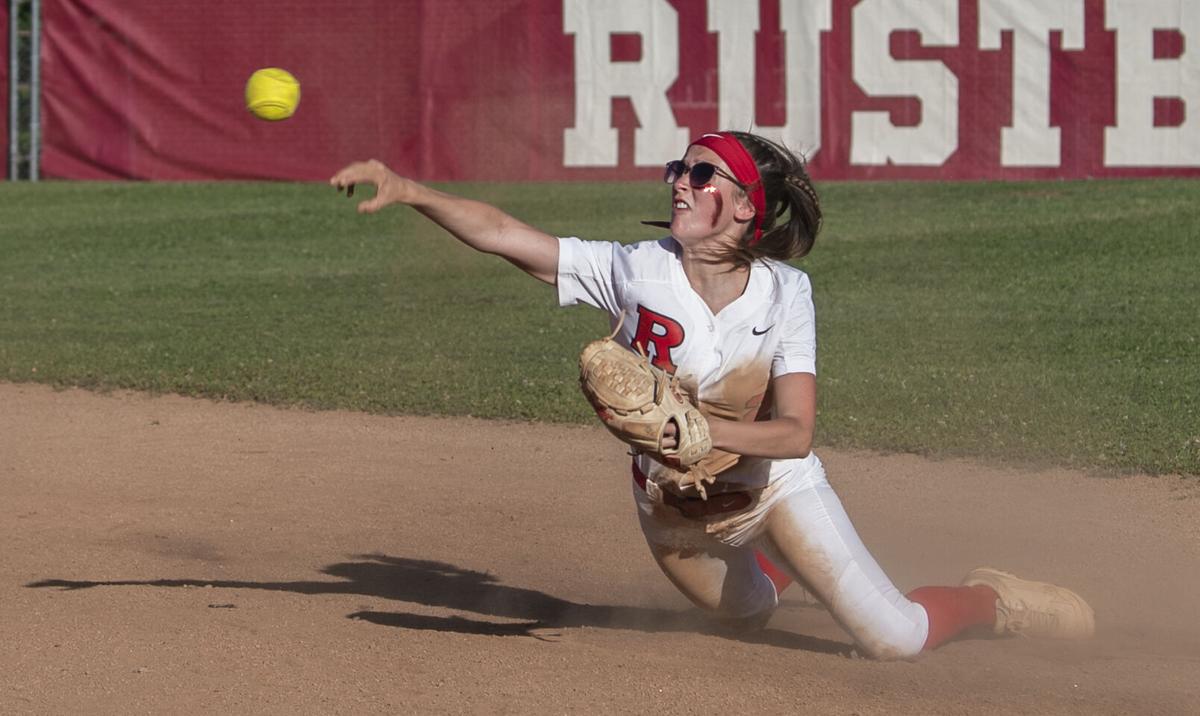 Rustburg second baseman Morgan Smith attempts to throw a Spotswood runner out from her knees after stopping a hard-hit grounder.

RUSTBURG — For as good as the Red Devils were in the circle, they might’ve been even better at the plate Wednesday.

Eden Bigham did her job once again as Rustburg’s ace, and with a combination of power, patience and knowing when to pounce, the offense buried Spotswood in the Region 3C semifinals, 12-0.

“Everybody’s really coming together right now,” Bigham, the junior pitcher, said of her team, which tallied 12 hits and didn’t strike out once.

Every player in the RHS lineup contributed by recording at least one hit or run. Five players had at least one RBI.

Aysia Jiovenetta went 3 for 4 for the second consecutive contest, recording a single, double and home run Wednesday, just as she had Monday. Destiny Jones and Katie Donald (2 for 4) had one home run apiece.

Rustburg (14-0) didn’t waste any time getting its offense going. Maggie Mayhew led off the bottom of the first with a single to right field on the first pitch, and Carly Hudnall (3 for 4) moved her over with a bunt single on Spotswood starter Katie Fletcher’s next offering.

The No. 4 Trailblazers (13-4) prevented any real damage by recording three outs against the next three batters, but Rustburg’s offense couldn’t be held off for long.

Jones opened the scoring with a solo shot in the next frame, and Jiovenetta added a two-run shot in the third.

Rustburg pushed across three more runs in the fifth on Bigham’s two-run single and Destiny Ochs’ single. Both hits came with two outs.

Spotswood gave up six runs in the sixth to enact the “mercy rule.” Donald provided yet another offensive highlight to cap the game, knocking a high-arching ball over the fence in left-center field for a grand slam.

“I saw a fat meatball, that’s what I saw,” Donald said. “I just knew I was gonna hit it hard, just from feeling it off the bat.”

Donald finished off Monday’s game against Fluvanna with a run-scoring hit, as well, to cap that day’s 3-for-4 performance, which included a two-run bomb.

Rustburg’s showing at the dish Wednesday complemented another solid outing for Bigham. The only blemishes to her name were one hit in the fifth and a walk in the sixth.

“I like to throw perfect games and no-hitters,” she said, “but a win is a win.” Bigham’s brilliance in the circle, however, wasn’t dulled much by the two baserunners.

Fletcher singled and was the only Spotswood runner to advance into scoring position, moving to second on Lizzie Blatz’s sacrifice bunt. Brooke Morris drew a four-pitch walk a frame later.

On both occasions, Bigham rang up the next batter (and in the sixth, the next two batters) to get out of the frame.

The University of Virginia commit had confidence in her ability to eliminate the threat, especially given the Trailblazers’ propensity to swing away early in Wednesday’s contest.

“Some of my pitches weren’t strikes, but they were swinging at them anyways, said Bigham, who tallied 59 strikes in 78 pitches.

Bigham retired the first 12 batters she faced on 11 strikeouts and a flyout. Only once in that span did she fall behind in the count. On the day, she fell behind just twice (the other time came on the walk).

Fletcher and Blatz were the only two Spotswood players to put the ball in play against Bigham.

The Trailblazers, coach Brooke Hensley said, hadn’t faced any other pitcher of her caliber entering the game.

“Not even close,” she said, explaining she knew her team may be overmatched given what she’d heard about Bigham.

“I had heard from some umpires and coaches that she was averaging about two strikeouts an inning, throwing about 68 [mph], so we knew coming into this game that we were gonna have to be on our A game to have a chance. I can’t even say enough good things about that girl. She did very well.”

Fletcher, who gave up three runs (all earned) on five hits in 2 1/3 innings, took the loss. Morris threw 2 2/3 innings in relief, and Taelor Ware entered in the sixth but recorded just one out before Donald’s game-ending bomb.

Up next for Rustburg is second-seeded Fort Defiance (12-2) in the Region 3C championship. The winner of that game, set for 6 p.m. Friday at Rustburg, advances to the Class 3 state tournament.

Detroit Lions embrace being underdogs in 2021

What will it take for the Giants to take down the Dodgers?

What will it take for the Giants to take down the Dodgers?

What impacted the line move on the Dodgers?

What impacted the line move on the Dodgers?

Prominent members of the community, former players, and a host of others teed it up for 18 holes with one goal in mind: Supporting the Appomattox football coach in his recovery from multiple myeloma.

Altavista to induct inaugural Hall of Fame class in 2022

"There have been so many great players, coaches and teams to come out of this town," Altavista boys basketball coach Casey Johnson said. "We really wanted to start honoring them because we felt like something was missing."

Ellie Eckert let a wide smile dance across her face Saturday as younger swimmers gave her hugs and pats on the back on the deck of Wildwood pool.

Cassell Richardson, a three-time All-Region 4D first-team selection, made her senior campaign count with another stellar showing. She scored 31 goals in 2021 to give her 109 career goals in three seasons.

Brannon Adams took sixth place at the Class 4 state championships and was JF's first finisher that day. He also posted the area's best time in the regular season.

Rustburg’s Katie Donald gives her assistant coach Jason Hudnall a low-five after she belted a grand slam to end the game against Spotswood by a 12-0 “mercy rule” score.

Rustburg pitcher Eden Bigham winds up to deliver a pitch against Spotswood. Bigham struck out 16 and lowered her ERA on the season to 0.10.

Rustburg second baseman Morgan Smith attempts to throw a Spotswood runner out from her knees after stopping a hard-hit grounder.