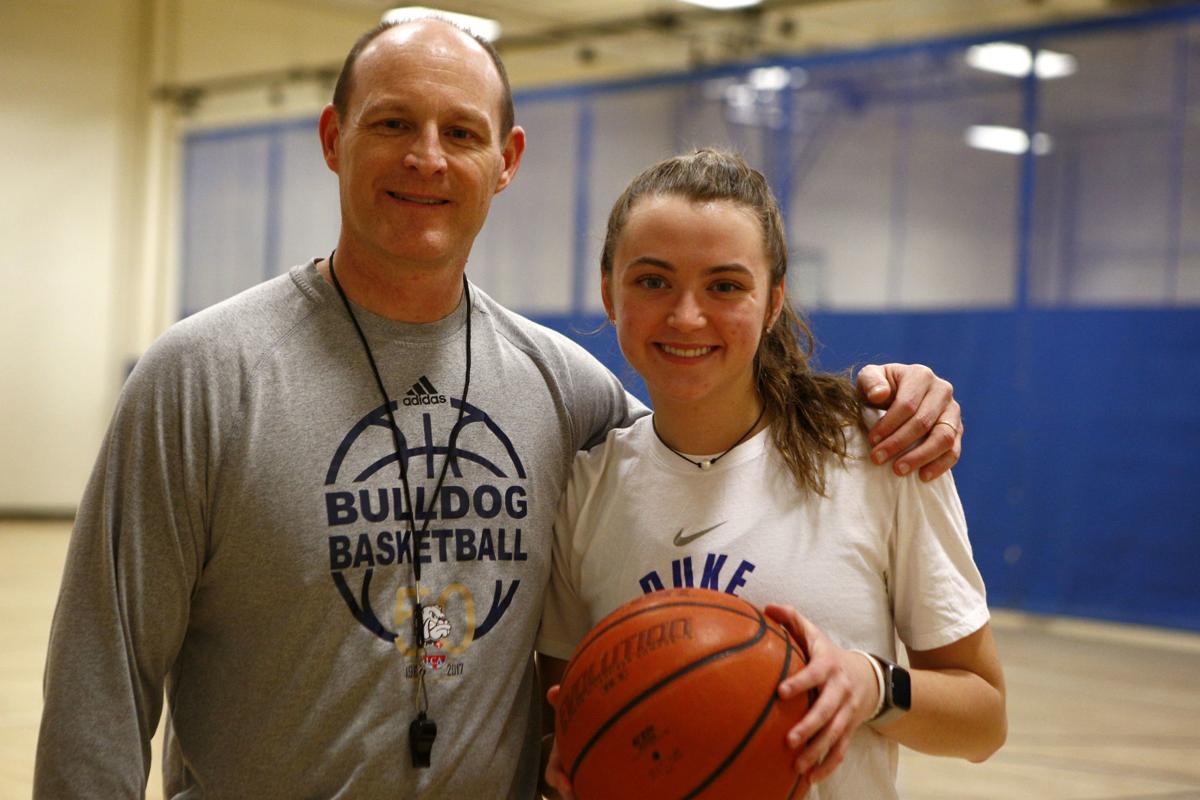 John Patterson and his daughter, Gracie Patterson, pose for a photo at Liberty Christian Academy in Lynchburg on Wednesday, Feb. 5, 2020. 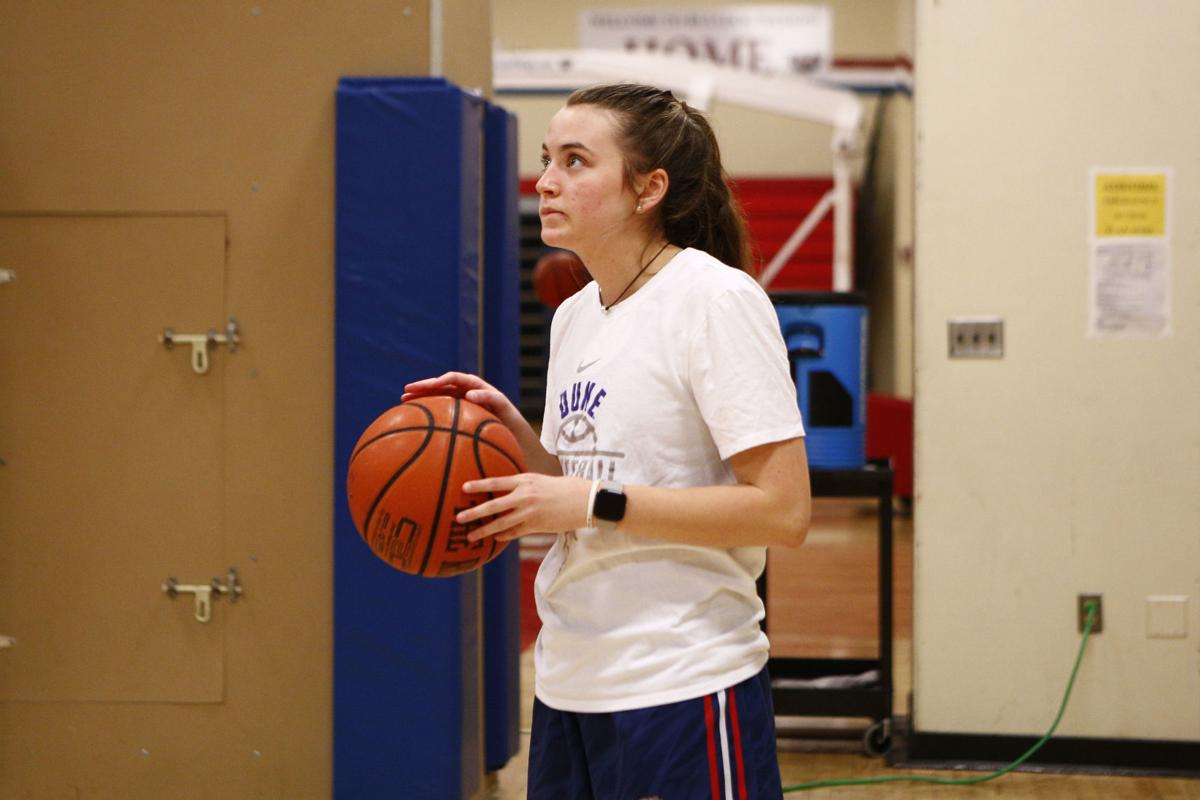 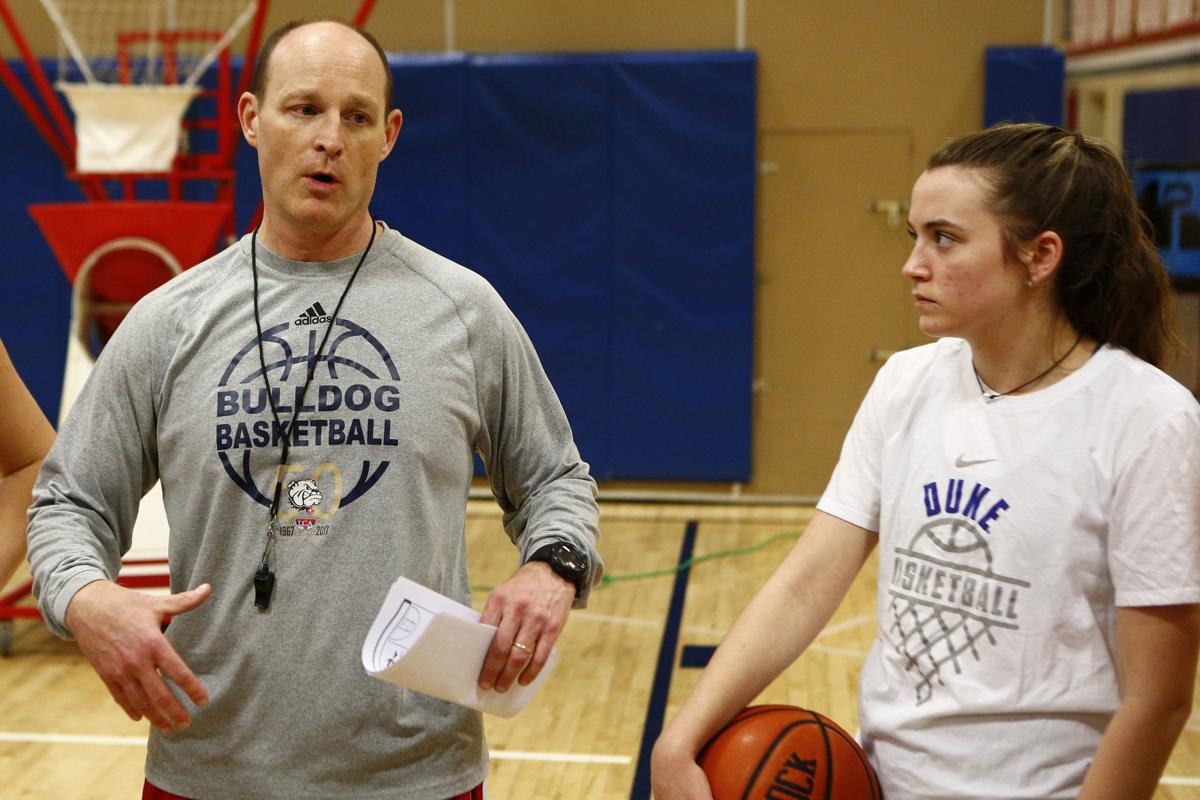 John Patterson address players as his daughter, Gracie Patterson, looks on during practice at Liberty Christian Academy in Lynchburg on Wednesday, Feb. 5, 2020.

Kellyn Sheppard remembers her reaction to the news.

“You know when you get a phone call and you’re just like, ‘Oh no this can’t be good?'” Sheppard, a senior on the Liberty Christian girls basketball team, said.

Her gut feeling as her teammate’s name flashed across her phone that day last summer was on point.

Sheppard answered the call and heard Gracie Patterson on the other end. Patterson, with whom Sheppard had been playing basketball since elementary school, wouldn’t be able to join her on the court for LCA during the upcoming winter season, their senior season.

Patterson’s final campaign was lost. The swan song she envisioned would never become a reality thanks to an injury she suffered as she tried to perfect her craft as a point guard.

At a summer camp in Maryland geared toward the position — the same camp the LCA floor general had been to for years — her hopes came crashing down as she jumped up for a short shot during a scrimmage. Patterson felt a pop in her left knee as a ligament, her anterior cruciate ligament, completely tore.

“I remember just feeling so defeated,” she said of her reaction to the diagnosis. Heading into her senior year at LCA, she’d have to overcome an ACL tear, along with a small tear in her meniscus.

John Patterson, Gracie’s dad and coach, was hours away in Virginia when he got the call.

“I was like, ‘I just did something to my knee. I don’t know what it is, but I know it’s bad, and I know you guys need to come pick me up soon,’” Gracie said, recalling her call to her parents after suffering the injury at camp.

As a father, Patterson said, he was heartbroken about all the opportunities she’d lose. Later, his perspective as the LCA coach kicked in.

“We kind of lost our heartbeat,” he said.

Gone was the Bulldogs’ “coach on the court,” he explained, the player who a year ago was a second-team all-Seminole District and honorable mention all-Region 4D selection.

“She never came off the court,” Sheppard said of her teammate’s past performances. “She knew all our plays. It’s definitely been a big adjustment. But I think we’ve adapted.”

The coach, of course, had to rethink his approach and shuffle players around. Players, meanwhile, had to learn to work with new lineups, which often include Taylor Hartless as the Bulldogs’ main point guard.

In the first couple months of her comeback campaign, Gracie Patterson said she felt good. She’d been doing rehab and jogging some, until she started experiencing pain.

A procedure to remove some tissue came next, but also revealed a screw inserted during surgery is not laying as it should in her knee and instead is rubbing up against the repaired ligament. This source of the pain, Patterson explained, requires another surgery to replace the problematic screw, which is on tap for the near future.

A return for her senior season, then, was completely out of the question, so Patterson started to adapt, too.

“I kind of had to think about how else I could fill other roles of being an encourager and kind of a coach a little bit,” she said.

Instead of stepping onto the court this year, Gracie Patterson has taken up a perch beside her father on the bench.

Together, the father-daughter duo tries to help LCA (10-10, 8-5 Seminole District) from the sideline. John Patterson draws up plays and shouts direction to his players, and Gracie — now a self-professed student of the game — offers her insight, as well.

“I do [look to her] every game,” John Patterson said. “Usually I’m asking her if we should switch defenses [and saying], ‘Grace, what do you think here? Should we switch something?’ Those moments are special for me, our interactions on the bench, and me trying to teach her why we are or are not doing something.”

There was one occasion when Gracie wasn’t beside her father for a game, though. In a contest against Amherst on Monday, Gracie Patterson got to celebrate her Senior Night with her teammates as she stepped onto the court as an LCA player one last time. Thanks to an agreement with Amherst, Gracie Patterson secured the opening tipoff and quickly walked up the court to shoot and make an uncontested layup.

Gracie Patterson finally broke into the scoring column in her senior season.

“It meant a lot to me,” she said. “I’ve worked really hard to get to where I was, and I think [that moment] encompassed what I’ve done and how my teammates have supported me.”

Through the unexpected and disappointing trial, Gracie Patterson said she’s tried to be “a good steward.” She’s used the time off the court to learn more about the game. She’s become a better encourager to her teammates in her new role, and she’s deepened her faith.

“I had high expectations of wanting to do great things my senior year, and I had to take those feelings and just remember that the Lord had a different plan for me,” she said. “That doesn’t mean he doesn’t have been plans for me; it just means that they’re different than mine.”

John Patterson and his daughter, Gracie Patterson, pose for a photo at Liberty Christian Academy in Lynchburg on Wednesday, Feb. 5, 2020.

John Patterson address players as his daughter, Gracie Patterson, looks on during practice at Liberty Christian Academy in Lynchburg on Wednesday, Feb. 5, 2020.