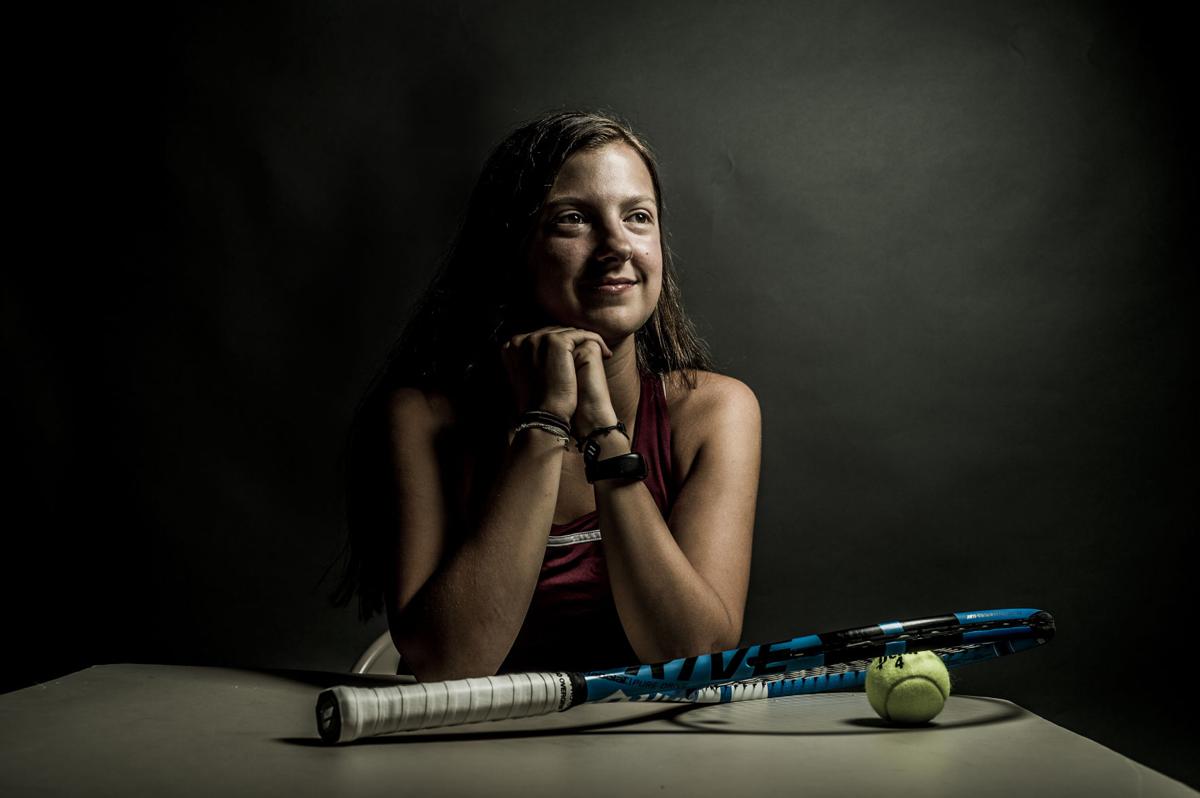 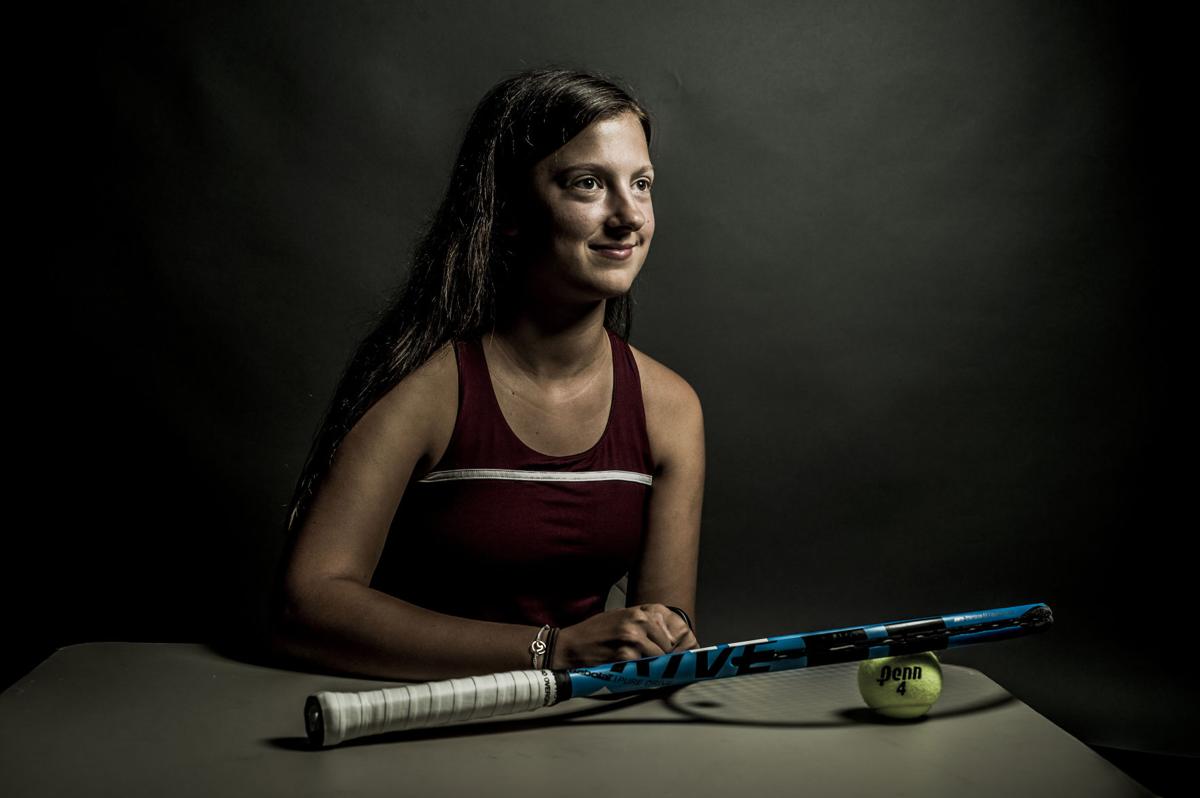 A: I remember playing soccer for like five years and recently basketball. I love basketball and played last season at VES, but this year, it was probably the first year that I was completely, absolutely focused on tennis, because I realized it’s what I really want to do. But tennis has always been the main thing.

Q: What do you feel like your role is on this team?

A: Hopefully I motivate the people I play with. … But every match counts the same, so it’s not like I’m more important than anyone else, because if I win my matches and nobody else wins their matches, then we’re not gonna win the whole thing. So every person on the team, especially the top six, their matches are important, so I hope I motivate them to practice so we have a good season.

Q: Is it difficult with tennis being such an individual sport for you to also focus on being part of a team?

A: It’s definitely different, especially the process with the team. In matches, I’m the one on the court with my opponent. Playing doubles is the extra step, but it’s made [playing for a team] more fun.

Q: Do you wish you played in the spring rather than the fall?

A: It’s different, because a lot of people play in the spring, and I could be playing different people, but honestly it’s not that much different. It rains less, so that’s pretty much the one thing. It’s good to not have to share the court with the boys.

Q: What’s something you’re most proud of while playing with VES?

A: With the team, it was definitely freshman year, having the 13-0 record and making it to semis in states. That was just an amazing experience that I’ll remember. Hopefully next year we can get first.

Q: Is there a match that you’re particularly proud of?

A: It was the doubles, beating the No. 1 at North Cross [this year]. That was one of the best doubles teams, and they won states. It was awesome because it was a battle, and also it was on our home courts, so everybody was there. That made us have the 5-4 score, so it didn’t technically mean anything [for the match] because we’d already lost, but getting that win still meant a lot.

Q: What’s your favorite memory from this year?

A: The bus rides were really fun, and we always have team dinners, even during the winter and the spring; just getting together. And pulling out a tight match — I guess it was against [St. Anne’s-Belfield]; they’re a Division I, and we beat them. … But also singles, just doing well against [North Cross] girls that have been playing throughout their lives.

Q: Is there a person, a coach or a teammate, for example, who pushes you to be better every day?

A: It’s self-motivation, because I’m so focused on my [United States Tennis Association play] and things that are gonna really matter for college, so just pushing myself to have the best results. … But honestly the coaches are just really fun.

Q: What do you feel like your strengths are on the court?

A: Probably power, my baseline game and my serve.

Q: How do you feel like you’ve improved this year?

A: I feel like I’ve improved a lot. … I think probably my backhand has improved, and I’d say my serve and footwork are the main things I’ve improved.

Q: Who is your favorite tennis player?

A: Roger Federer, Serena [Williams] and Eugenie Bouchard. Roger and Serena have just been so consistent and they obviously love the game. … They’re really powerful and just take control of the points. Bouchard, I just really like her. I went to the U.S. Open, and she signed my ball.

Q: If you could meet anyone, dead or alive, who would it be?

A: It’d probably be Serena. I really want to meet her.

Q: What would you ask her?

A: Just her training schedule and how she gets so strong. That’d be pretty awesome to have like half the strength of her.

Q: What’s your favorite subject, and what’s your best subject?

A: I would say my best is math, and my favorite is probably English.

A: So I’m trying to be really healthy this year, but my favorite unhealthy food is probably ice cream.

A: My favorite restaurant here is probably Millie’s [Living Café] or Crisp.

Q: Aside from playing tennis, do you have any special talents?

A: I did Hula Hoop in a talent show once. It was in elementary school. I don’t have any weird talents, it’s just kind of sports.

Player of the Year

ALL-STAR STUFF: Burger is a consistent force for the Bishops, helping her team to the top 6 in the Virginia Independent Schools Athletic Association Division II level in the fall. Individually, Burger amassed an 11-2 singles and lost only to the state singles champion and the state singles runner-up. Burger also went 12-1 in doubles, with an impressive victory over eventual state champion North Cross. Outside of school, Burger also plays individually in United States Tennis Association tournaments, improving her game as she pursues her goal of playing in college. She recently won one regional tournament and placed second in another, helping her to a current ranking of 23rd among girls 18 and under in the Mid-Atlantic region, which encompasses Maryland, Washington, D.C., West Virginia and Virginia. Burger currently boasts a Universal Tennis Rating of 8.

ALL-STAR STUFF: In her first year as coach of the Hilltoppers, Hutchison helped a group of mostly freshmen overcome a lack of experience, helping her team to a runner-up finish in the Region 4D tourna-ment and an appearance in the state tournament, where they lost to eventual state runner-up John Handley. The Hilltoppers went 16-4 under Hutchison, boasting a record that included several shutout wins. A Glass player also won a Seminole District title and finished second in the region on Hutchison’s watch.

ALL-STAR STUFF: In her spot at No. 1 singles, Knight was “dominant,” according to coach Annmarie Hutchison, throughout the regular season, dropping only a couple matches. Knight won the Seminole District singles title and helped her team to a 16-4 record, a Region 4D runner-up finish and an appearance in the Class 4 state tournament.

ALL-STAR STUFF: After switching sports from softball to tennis as she started high school, Swan’s ten-nis ability was evident almost immediately. In the final year of her high school career, and her third year at the No. 1 singles spot, Swan used her strong and steady baseline game to amass an 11-3 record this year and helped the Bees advance to the Region 3C semifinals.

ALL-STAR STUFF: Fritz didn’t let youth stop her from a successful season for the Bulldogs, playing at the Nos. 1 and 2 spots throughout the season. Fritz was 10-4 overall individually, 6-4 at No. 1 and 4-0 at No. 2. She helped her team to a semifinal finish in the Region 4D tournament and was a region quarterfinalist in both the individual and doubles tournaments.

ALL-STAR STUFF: At the No. 1 spot, Pascadlo helped Jefferson Forest She helped her team secure a spot in the Region 4D quarterfinals. Individually, Pascadlo made it to the Region 4D semifinals after pulling off a three-set victory in the quarters. Pascadlo also was part of two different doubles teams that found success in the postseason, which included a Seminole District championship with partner Patricia Ozcorra Russo.

ALL-STAR STUFF: At the No. 2 singles spot, Lila Hutchison helped her team to a Class 4 state tourna-ment appearance and a Region 4D tournament runner-up finish. Her coach, Annmarie Hutchison, also praised her mental fortitude, saying she was able to be constructively self-critical to win. Lila Hutchison also teamed up with her sister, Anabel, in doubles play to contribute to her team’s 16-4 record.

ALL-STAR STUFF: The Bees upperclassmen duo utilized each other’s strengths to post a 12-2 record during the regular season, losing only once to two top teams from the area, Jefferson Forest and E.C. Glass. In the Seminole District tournament, though, they got revenge on Glass, beating them to advance to the district finals against JF. Swan and Livingston helped the Bees to the Region 3C semifinals as a team, and they also made it to the quarterfinals of the Region 3C doubles tournament.

ALL-STAR STUFF: While the two played with different partners at times earlier in the season, Pascadlo and Sewell teamed up to make a run in the Region 4D doubles tournament. As the top-seeded team in the tournament, the two cruised through to the semifinals with a 6-3, 6-0 win over Carroll County before losing to a duo from Blacksburg, the eventual region champs.

ALL-STAR STUFF: The family connection between the sisters paid off this season for the Hutchison sis-ters, who complemented each other on the court and helped their team go 16-4. With the points the duo contributed, Glass made an appearance in the Class 4 state tourney and was the Region 4D runner-up. The two took advantage of each having different dominant hands to cover the doubles court well, advancing to the Region 4D doubles tournament quarterfinals, where they lost to a pair from Bassett, an eventual region finalist.

Will we see Max Scherzer traded?

How may players on the Cubs will be traded before the deadline?

How may players on the Cubs will be traded before the deadline?

How the U.S. Women’s Soccer Team trained for Tokyo heat

How the U.S. Women’s Soccer Team trained for Tokyo heat