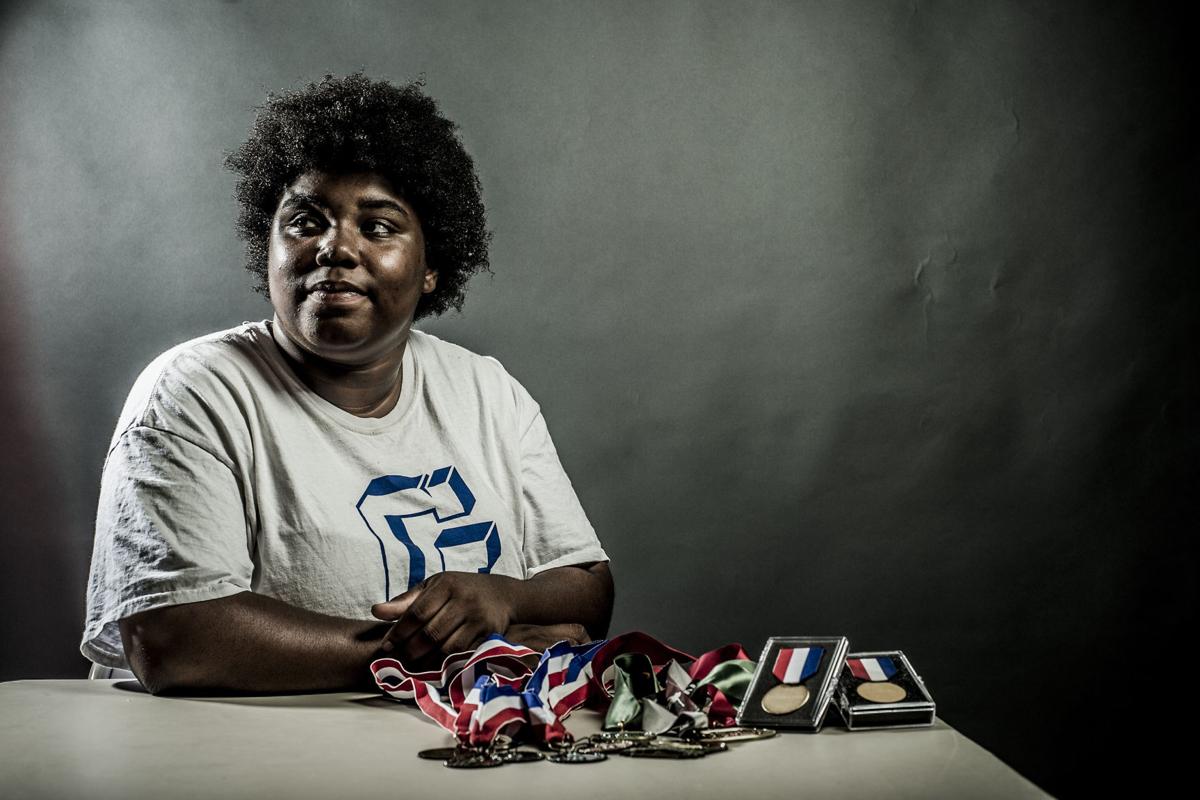 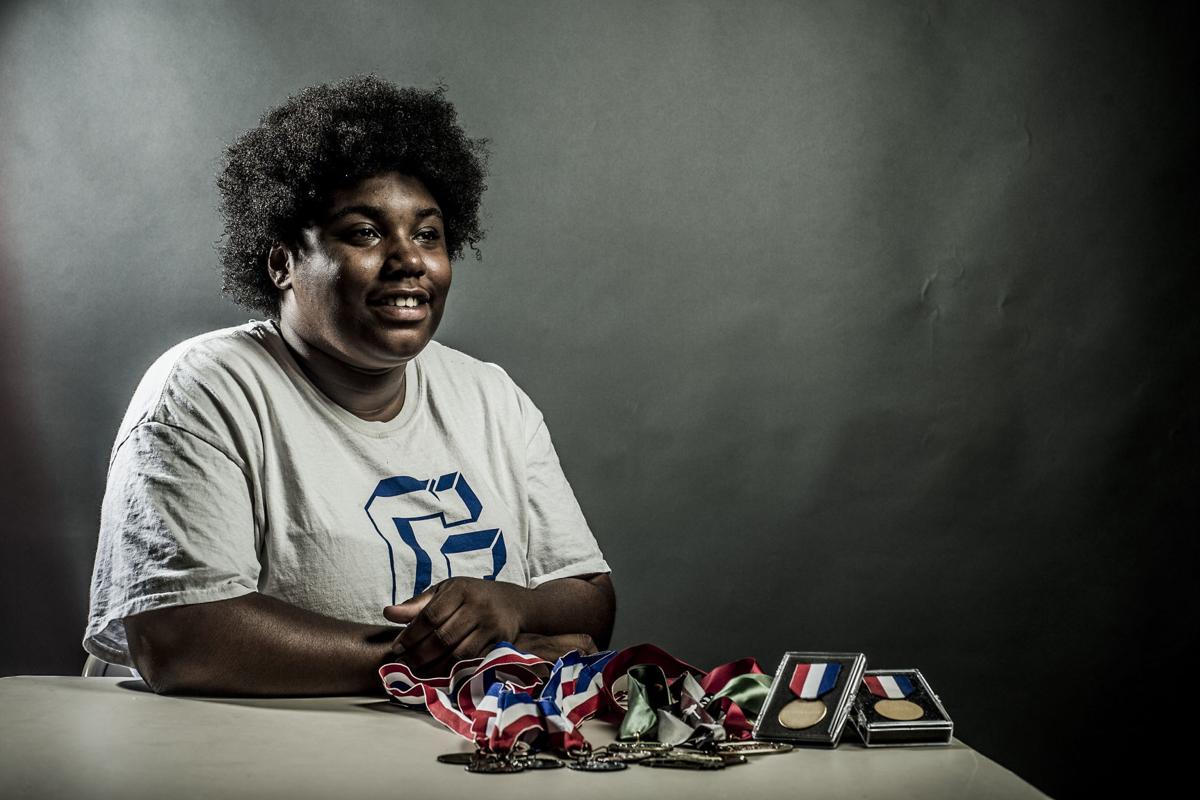 A: It went kind of fast, in my opinion. It was a better track season because we had a lot more participation to get in the groove of track and field, especially in shot put and discus. A lot of people don’t usually come out for those events, so it was great to see more interest.

Q: You are definitely a leader on this team. What’s that role like?

A: I’m kind of used to it by now, because I’ve had a leadership role with the ROTC for a while now. So it just added to a pile that I had in my life. But it was a great experience to have another group of kids look up to me.

Q: How long have you been in the ROTC?

A: All four years of my high school career. I was the corps commander for my senior year.

Q: So what are your college plans?

A: I’m going to Gardner-Webb University in Boiling Springs, North Carolina. I received a scholarship for track and field down there.

Q: You started winning state titles as a junior. What changed for you that season, after you had advanced to the state meet as a sophomore?

A: I guess the passion I had. After the first year, I saw that I really had something I enjoyed more than any other sport. So just the passion that I had for it and the fact that I was actually good at it.

Q: What accomplishment are you most proud of in high school?

A: All the leadership roles I was able to have and be a part of, because, again, it’s always good to be a leader in something.

Q: So what’s the driving force behind your desire to set an example?

A: My [seven] brothers are always the people I strive to be an example for, especially the little ones who are just getting ready for middle school and elementary school, showing them that they need to stay focused and they can do sports and everything else at the same time if they want to.

Q: What else are you interested in beyond track?

A: Computer science and engineering. That’s going to be my major in college.

Q: Glass has a strong history of throwers. Why do you think that is?

A: The coaching staff, of course. Coach Kevin Latham, out of all the coaches I’ve had, he’s the best. He’s honest even if it hurts, which is a good thing. But he also encourages you to do your best and to always have fun. That’s his top thing, to always have fun even when you’re not doing great. And then there’s coach [Jermaine] Johnson. He’s there as much as he can be, to put you in the weight room. You have to have strength behind you for the shot and discus.

A: Because they strive for their best and they help each other, even when other teammates are like, ‘I can’t do it.’

Q: You started track in 10th grade. Why then?

A: It was just something new to try. In ninth grade I didn’t do any sports and in 10th grade I was like, well, I need to do something other than school. So my gym teacher recommended me to coach Latham and coach Latham came out to see me and was like, ‘Try this.’ Ever since then I’ve been doing track.

Q: Do you have any advice for younger throwers?

A: Always have fun even when you’re having a really bad day. Always try to look on the bright side of things.

Q: Who is your favorite teacher at Glass?

A: For all four years, Sergeant [Don] Dougherty and Lieutenant Colonel [Leslie] Pratt. They’ve always been there for me. For this year, it’s between Casey Wood, my English teacher, and Jennifer Tyree, my emergency dispatch teacher [career tech].

Q: Who is the person who has most influenced your life?

A: My mom, Gisel Crawford. That’s a common answer, but it’s definitely my mom, because she’s gone through so much — between juggling the fact that her and my dad were separated and then her health problems and then with us having so many sports. And plus, my other brother, when he came to stay with us, she really juggled that plus work, surprisingly, for the last 13 years. That inspired me to multitask as good as she can.

Athlete of the Year

ALL-STAR STUFF: Taliyah Wade has been a model example throughout her time at E.C. Glass. In addition to her skills in the shot put and discus, Wade has been a member of the ROTC all four years of high school and served in high positions during that time. She is headed to Gardner-Webb on a track scholarship in the fall after winning four individual state titles and five team state titles during her career. In the outdoor season, Wade set a school record in the shot put by throwing a massive 42-10 in South Carolina and then later captured another state title at the Class 4 meet in June with a 41-05.25. She also won the Region 4D shot put and discus titles and the Seminole District Championship shot put title, setting a new meet record in that event.

ALL-STAR STUFF: With one decade of serving as boys and girls indoor and outdoor coach on his resume, the E.C. Glass grad has captured a total of 10 team state championships. Under Smith’s leadership, the Lady Hilltoppers captured their third straight outdoor Class 4 state title in June. They’ve also won three of the last four state indoor titles. The Hilltoppers have gotten help all across the board in recent years, displaying sprint and distance specialists, strong mid-distance runners, savvy field athletes and state champion throwers.

ALL-STAR STUFF: Litke streaked to a third-place finish at the Region 4D championships by running a 1:00.06, a mark that gave her the best 400 dash time in the Lynchburg area. …. Also placed 10th at the Class 4 state meet.

ALL-STAR STUFF: The quartet of sophomores set the area’s best mark in this event by combining to run a 49.83 at the Seminole District Championship in May. … That time set a new school and Seminole meet record. … Also won the Region 4D 400 relay title with a 49.93 and finished third at the state meet to help E.C. Glass win the overall team title.

ALL-STAR STUFF: Allen posted a runner-up finish at the Class 1 state meet with a 5-02 and was the Region 1B champion with a 5-05. … That region mark tied her for the best finish in the Lynchburg area with Heritage’s Alexis Hastings, who was a region and district champion as well. … Allen’s 5-5 is listed as the best mark in Altavista school history.

ALL-STAR STUFF: Jauch won the Class 4 state pole vault with ease and set a new state record in the process, winning by one foot and posting a 13-00 mark. … Won the Seminole District title (12-00) and the Region 4D title (12-06). … Also placed fifth in the pole vault at New Balance Outdoor Nationals with a 12-10.25 in the championship division.

NFL Futures: Sleepers In the West

NFL Futures: Sleepers In the West

Q: How did you embrace your role of a goal scorer this season?