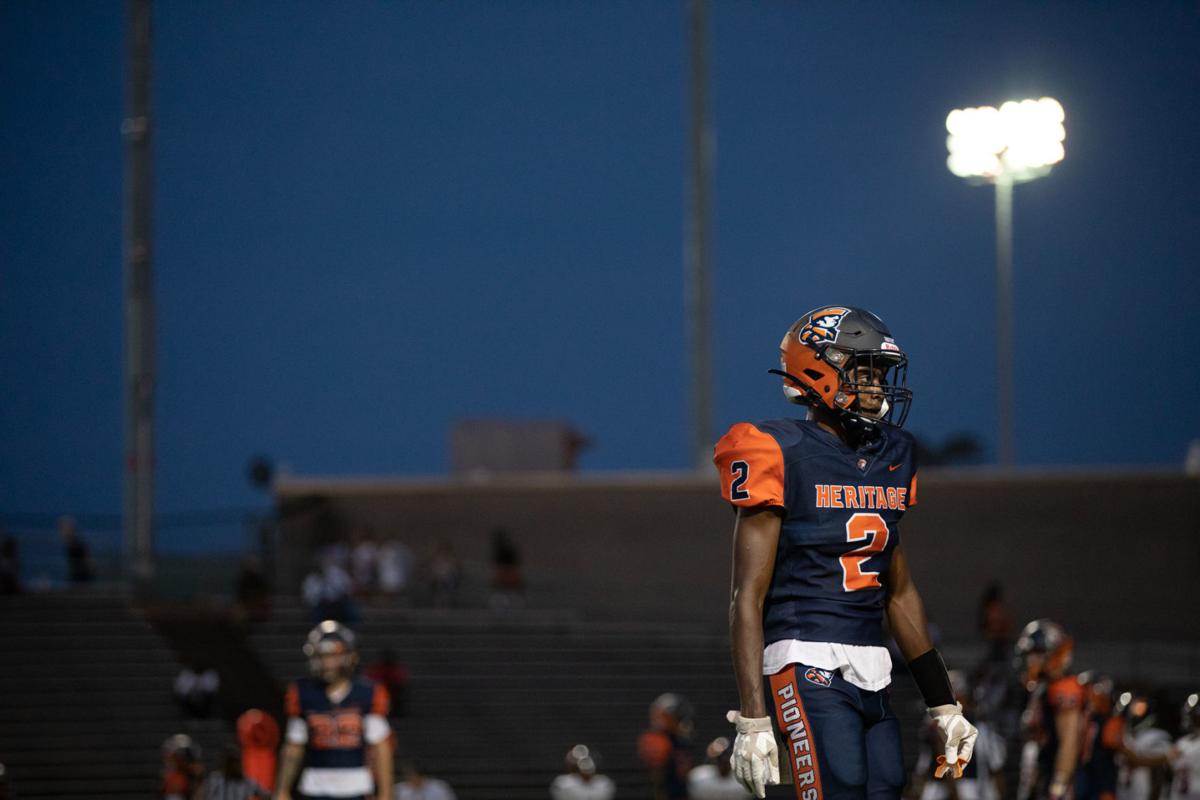 Heritage wide receiver Brian Trent looks out onto the field after a play during the first game of the season against Vance High School on Friday, August 30, 2019 at Lynchburg City Stadium. 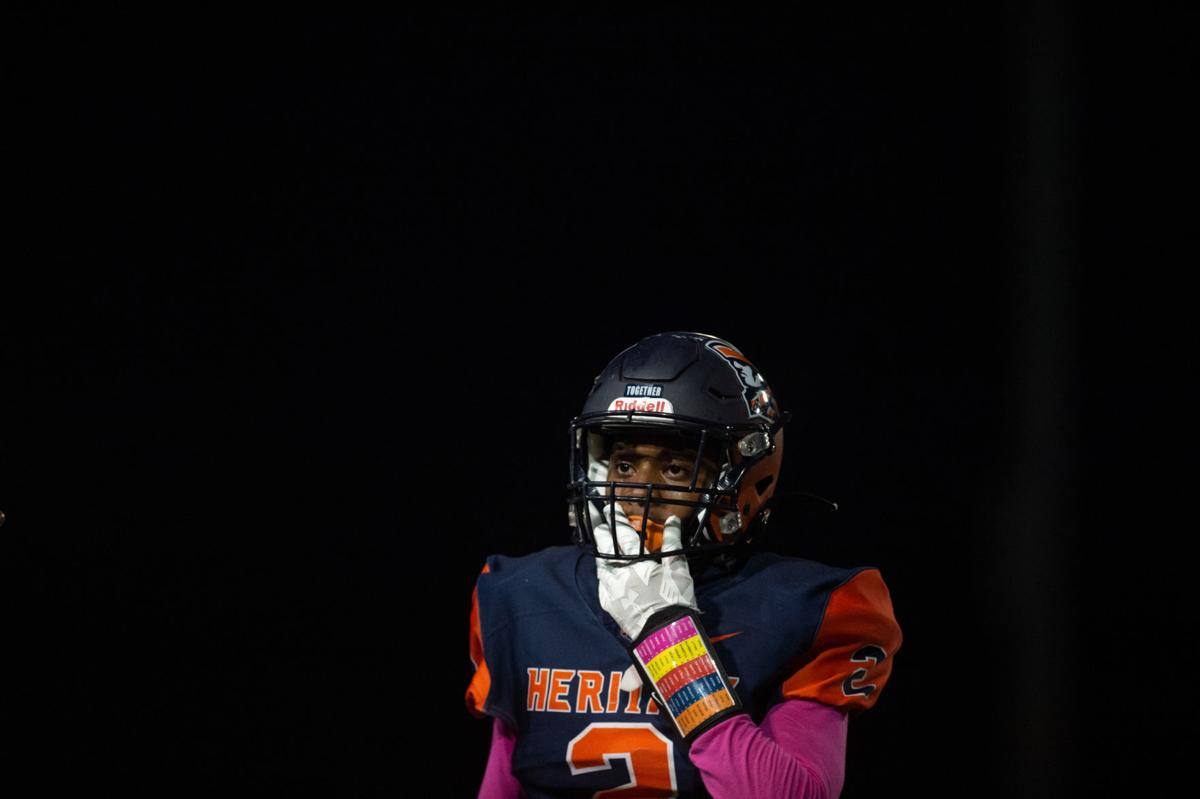 Heritage wide receiver Brian Trent looks to the sideline during the game against Jefferson Forest on Friday, Oct. 25, 2019 at Lynchburg City Stadium.

Watch Brian Trent play football and one of the first things you’ll notice is how much athleticism he brings to Heritage High’s offense and defense.

He’s so athletic, in fact, that he played just about every position growing up, from quarterback, running back and receiver to safety and spots on the defensive line.

But on the Heritage varsity team, the 6-foot, 157-pound senior found a home. He’s electric at wide receiver, a spot he’s commanded for the last two years. And at corner he demands so much respect that teams rarely throw to his side of the field.

The senior is a skill player to watch Friday, when the Pioneers battle E.C. Glass at City Stadium at 7 p.m.

Although he’s served as a major set piece for HHS the last two years, Trent often has gone unnoticed. He’s not flashy or assertive. He doesn’t appear cocky, and it’s driven by the amount of touches he receives.

Instead, he’s a quiet guy, someone who goes about his business without rip-roaring outbursts. His style of play does all the talking.

“I like to keep stuff to myself,” Trent said before Wednesday’s practice. “I don’t like other people knowing what I’m doing. Like, during the week, I take every week the same. I don’t talk much. I just go out on Friday night and play and do what I can do to help the team.”

As a junior, Trent made 12 catches for 297 yards. He scored two touchdowns and averaged a breathtaking 24.8 yards per catch, a number which led the HHS receiving corps. That’s a testament to his strength as a runner after securing the ball.

But Trent also dropped seven passes last season, including a touchdown pass at Liberty High on a night when he wasn’t playing his best. He made multiple mistakes on offense and defense. But soon, he was deflecting passes, making catches and getting back to true form.

And that’s the type of player Trent has shown he is: Someone who won’t give up.

“He just does things, but he doesn’t say anything,” fellow senior receiver Kyron Thomas said. “He works hard and quietly and perfects things. He’s one of the reasons why we have so much success in the secondary and the passing game.”

Heritage has a saying around school: “Our kind of guy,” or OKG for short. Players wear a patch of the acronym on one shoulder of their uniforms. “Our kind of guy” means a player is not only talented, but works hard in school, volunteers for community service projects, is present for weight room and summer workout sessions, is respectful and coachable.

Walk down the hallways with Bradley as players pass and the coach might point and say, “He’s an OKG,” or “That’s an OKG right there.”

And Trent is an OKG.

“The last two years have been unbelievable,” Bradley said of the senior’s development. “Just an unbelievable player but also an ambassador for our program. A kid that, in school, does things right. He’s very soft-spoken but always heard. Every kid on our football team respects and likes him.”

Trent put together a massive performance earlier this month against Rustburg, reeling in seven catches for 143 yards.

He’s only dropped two passes this season and is second on the team with 15 catches for 286 yards and three TDs. He’s still causing opposing defenses problems by averaging 19 yards per reception with Heritage’s new quarterback Kameron Burns (1,047 passing yards).

Trent joined the varsity team as a sophomore. Back then, Bradley knew he had “all the athletic ability in the world.” But at the time, the coach also questioned Trent’s work ethic. One reason, Bradley recalled this week, was because Trent was so smooth.

He made everything look easy, so it sometimes looked like he wasn’t trying hard enough.

Now Thomas calls his fellow receiver “a major key to our team.”

So far, the coach said, Trent has an offer from William & Mary and has drawn interest from James Madison and Elon.

Trent will go against E.C. Glass for the final time in his career on Friday. His two groups, the receiving corps and the secondary, could pose problems for the Hilltoppers, who will have their own advantages.

“I just want to see us come out and compete,” Trent said.

“Don’t have any fear, just come out and play to the best of our ability, and hopefully win it.”

VHSL 'not ready' to make recommendations about fall sports

The Virginia High School League moved the athletic programs for its 317 members one step closer to resuming out-of-season practice activities.

Heritage wide receiver Brian Trent looks out onto the field after a play during the first game of the season against Vance High School on Friday, August 30, 2019 at Lynchburg City Stadium.

Heritage wide receiver Brian Trent looks to the sideline during the game against Jefferson Forest on Friday, Oct. 25, 2019 at Lynchburg City Stadium. 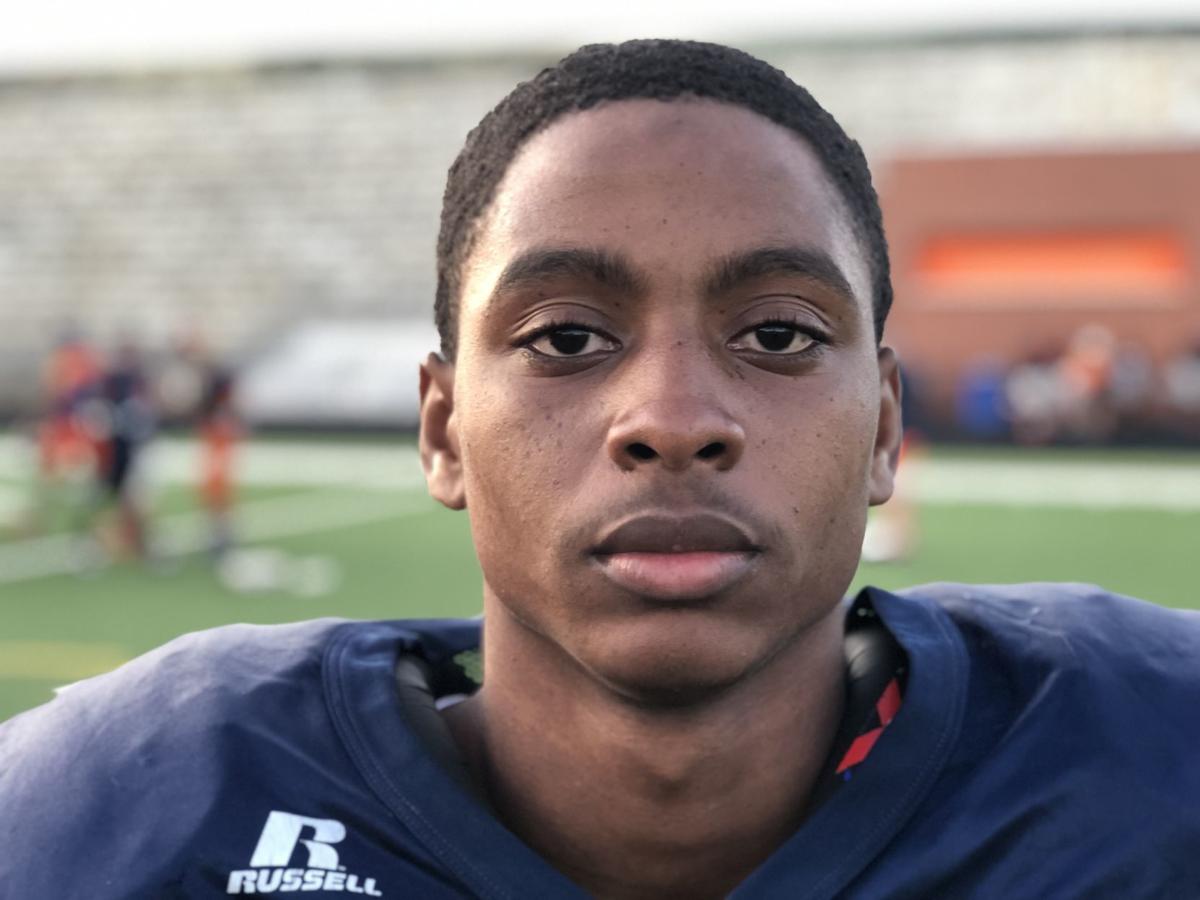