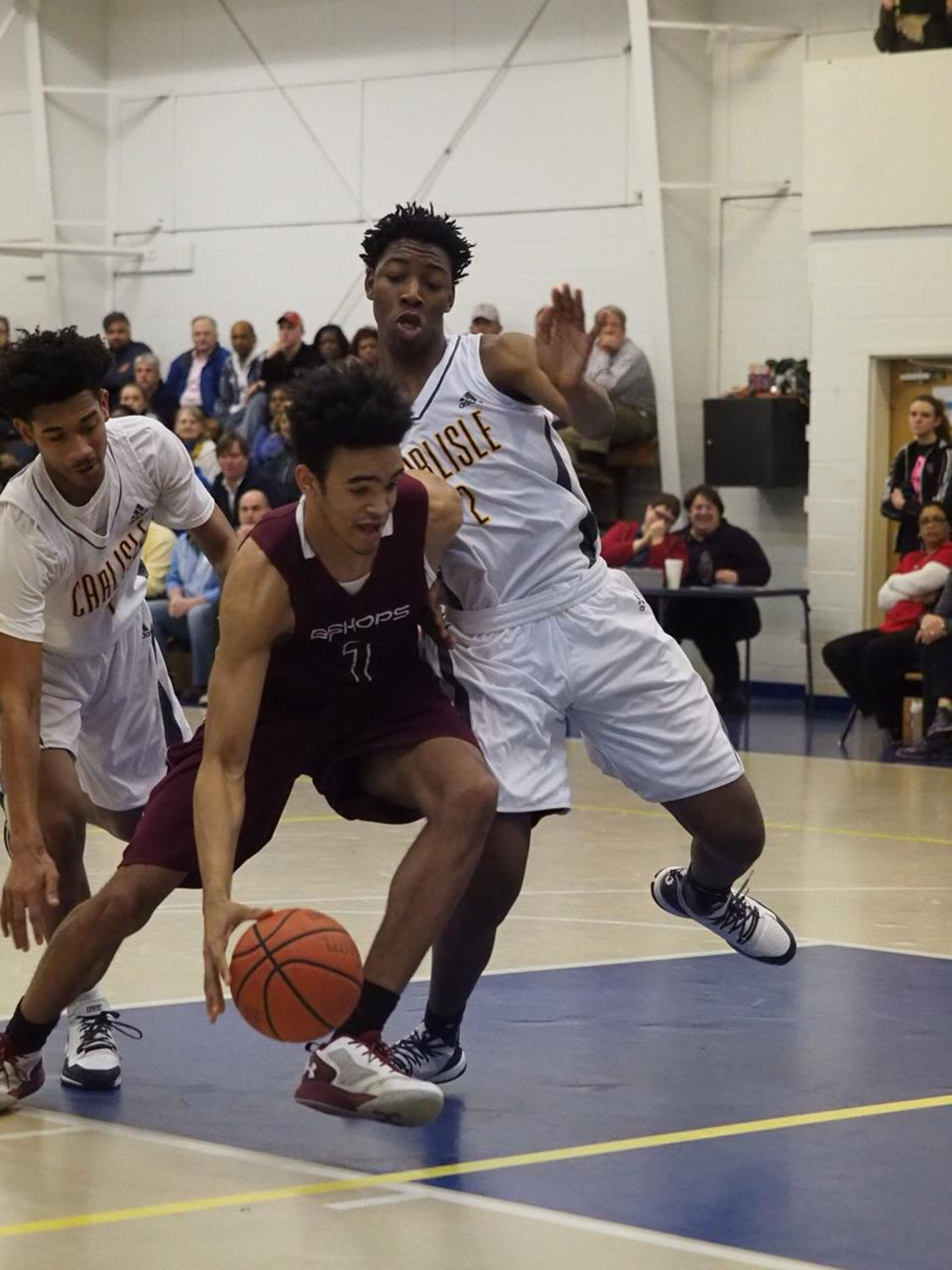 VES forward Sacha Killeya-Jones drives to the basket while being double-teamed by Carlisle's Gabe Osabuohien (right) and Rasir Bolton (rear). 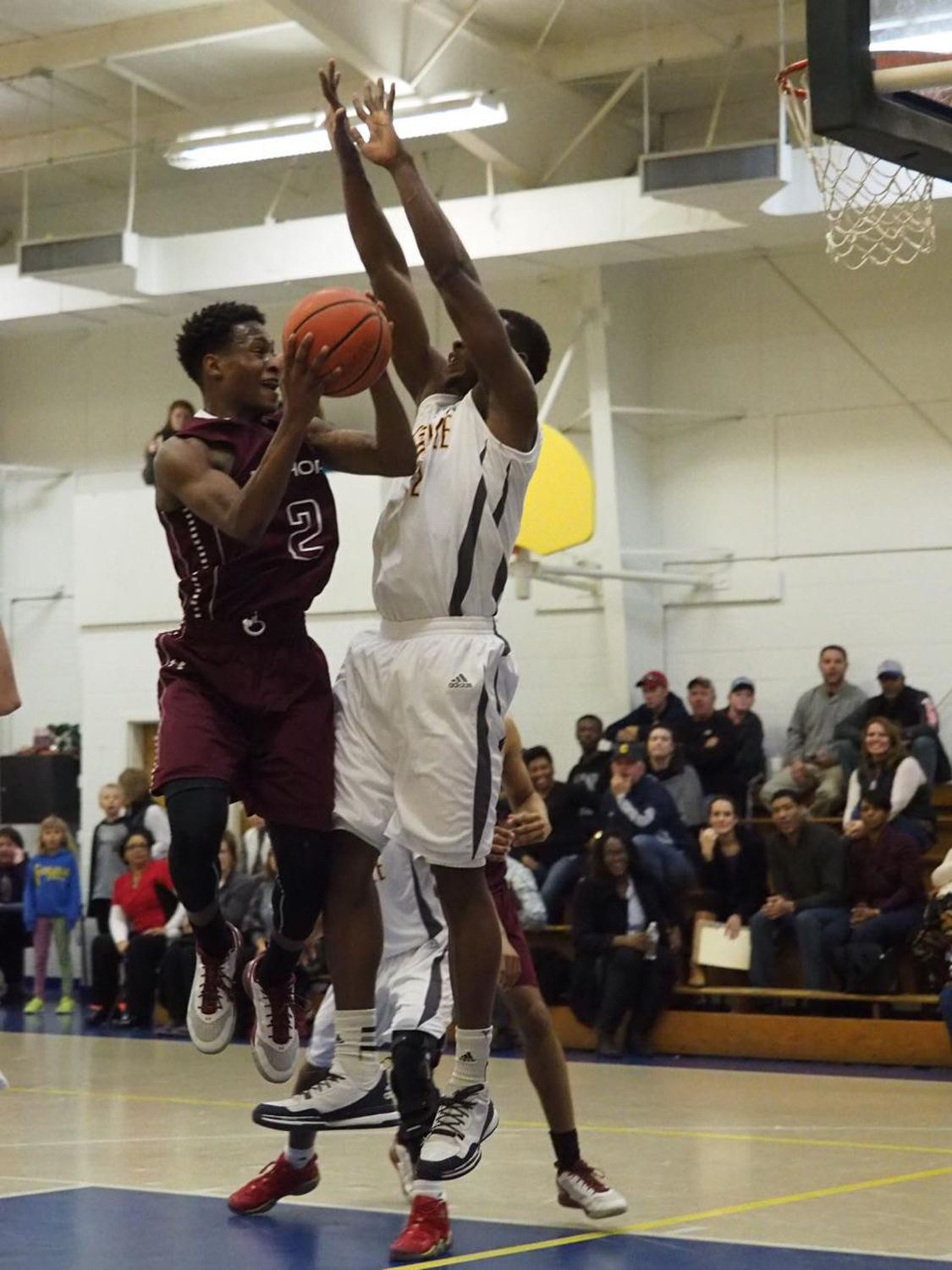 AXTON — The game plan VES coach Curtis Staples devised for the Bishops’ third meeting with Carlisle was to get Justice Kithcart as many touches early in the game to get the Pittsburgh signee going. Kithcart has enjoyed plenty of success against the Chiefs and if he got going, things would open up for the rest of his teammates.

Carlisle answered VES’ game plan with a physical style that threw off the Bishops’ attack. Every time Kithcart and his teammates attacked the basket, they were met with a host of bodies going up to stop the attack.

VES never got into a rhythm offensively in the first half and Carlisle capitalized by claiming a 67-57 victory Thursday evening in the Virginia Independent Schools semifinals.

“Pretty much they had a good game plan. We knew their game plan already coming into last game when they double-teamed me because I’ve been pretty much killing them the past couple of games that we’ve been playing,” Kithcart said. “They basically wanted to take me out of the game and kind of play their up-and-down style. They don’t really have a lot of bigs. Their main goal is to get up and down, so they did a good job of that.”

Kithcart was held to one field goal in the first half and the Bishops (12-8) were 8 for 24 from the field. That offensive inefficiency, coupled with two Carlisle runs in the second quarter, allowed the Chiefs (17-10) to take a 36-24 lead into intermission.

Tahj Small scored seven straight points late in the second quarter that fueled the second run, a 9-0 spurt that saw Carlisle’s lead balloon from 27-21 to 36-21 in less than two minutes.

“That was the game plan to be a lot more physical and try to get them in foul trouble early,” said Small, who scored 13 of his 17 points in the first half.

Rasir Bolton led all scorers with 22 points and tallied 12 in the fourth quarter. He went 8 for 9 from the free-throw line in the final eight minutes. Shakur Daniel added 13 points for Carlisle.

Kithcart finished with a team-best 21 points and 15 of those points came in the second half. The senior guard, who also had five rebounds and five assists, went 8 for 9 from the charity stripe after shooting 4 for 8 in the first half.

“I don’t think it was their physicality. I think our game plan was to really get Justice going and I think we did that,” Killeya-Jones said. “I was just really trying to clean up around the basket. I tried to do, but a lot of the calls weren’t really going our way. I had to kind of be more tentative. We knew they were going to try to double Justice, so we tried to free him up coming off screens and getting his shot and everything. Obviously Kevin was hitting, so I was kind of going with the flow of the game and let my other guys eat. I didn’t take a whole lot of shots, but my shot wasn’t really falling today. It’s a tough way to take a loss, but I think we’ll come back better Tuesday.”

The Bishops showed life in the fourth quarter by trimming a 15-point deficit to 52-45 with 2:35 remaining following a pair of Kithcart free throws.

However, Carlisle went 14 for 18 from the charity stripe in the final eight minutes as VES was forced to foul.

“They did a good job of making their run and making their shots early. We got stuck on five points for four minutes,” Staples said. “I am proud of how the guys fought back in the fourth quarter. I’ll say that. The good part about it, regardless of the record that we have — I know we’re not proud of that — we’ve still got a chance to win it. We’ll play Tuesday at home against somebody and basically the season starts all over. You can throw the records out the window, it’s tournament time now and anything can happen. I’m just going to get back and get these guys prepared and ready to try to make a run.”

The Chiefs used a 19-2 run in the opening four minutes of the third quarter to cruise to a comfortable victory over the visiting Bishops.

“I think coming out of the third quarter, they had a lot more energy,” VES coach Darko Sedlar said. “ … It came down to energy level and effort. I think they just wanted it more than we did.”

Tyeisha Williams scored eight of her team-high 15 points in the third quarter for Carlisle (18-6). Erica Carter added 11 points and Daisy Harris scored all 10 of her points in the fourth quarter.

Bre Jefferson led all scorers with 16 points and Janae Bennett added 10 points for VES. The Bishops (15-12) are expected to host a first-round VISAA tournament game early next week.

“I think overall, I don’t think the committee is going to look at one game. I think we’ve had some really, really tough teams that we’ve played this year and we’ve played them really well,” Sedlar said. “I think the committee looks at the whole picture. I think we’ll be OK. We’ll probably get a home-court in the first round and then go somewhere probably around the beach.”

RUSTBURG — High school basketball returned to the Lynchburg area Thursday night with clangs off the rim, missed defensive assignments and a lo…

AMHERST — Shouts bounced off the walls in the hallway next to the gym at Amherst County High School late Thursday evening. These were sounds o…

Few things are normal in this pandemic-altered season, but one truth still applies: when Heritage and Glass meet, throw everything out the window. Anything can happen.

After Further Review: Empty gyms and memories of the past

With gyms closed off to fans, silence reigned over basketball's return to the Lynchburg area.

Additional delays to a return to competition defined the first couple weeks of the new year, but more area basketball teams are finally gettin…

A year in review: Looking back on sports stories that inspired us to persevere

With our Reporter's Top 5 series, we want to tell you personally about the stories that mattered to us and this community in a year that stretched us to new lengths.

VES forward Sacha Killeya-Jones drives to the basket while being double-teamed by Carlisle's Gabe Osabuohien (right) and Rasir Bolton (rear).