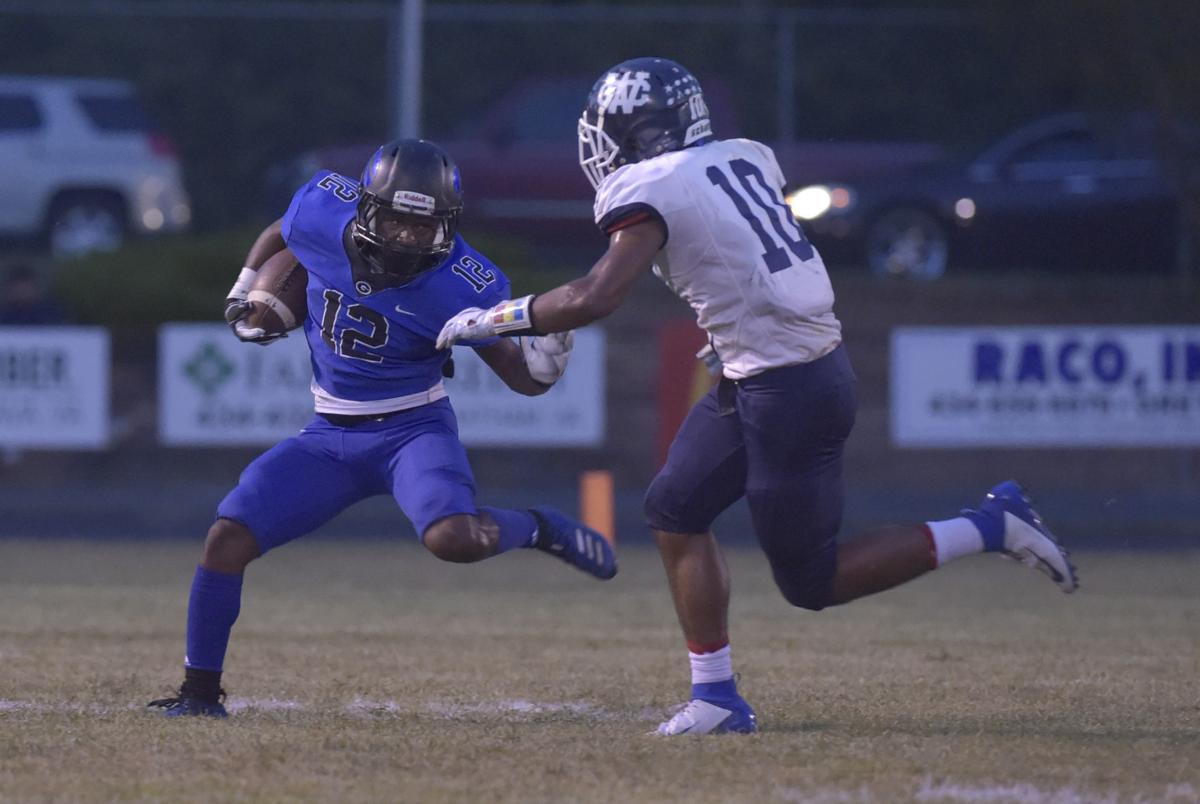 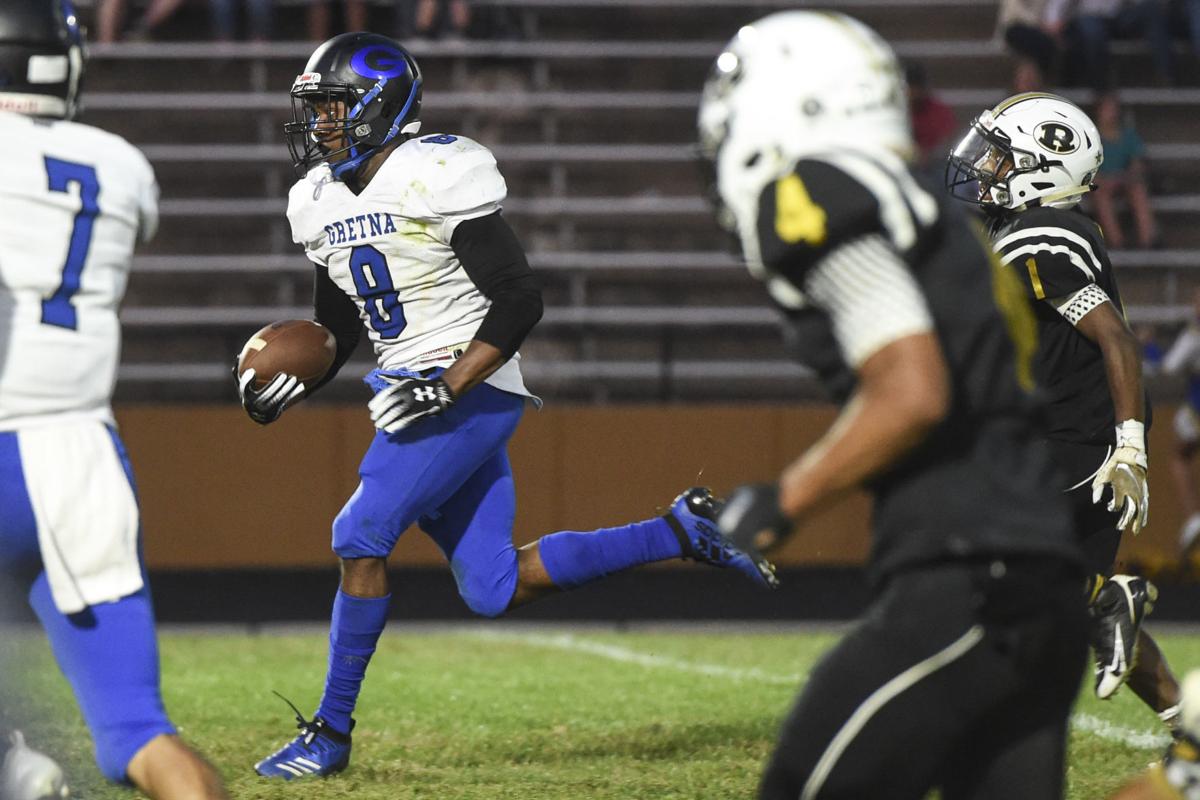 MICHAEL SHROYER | Special to The Roanoke Times September 20, 2019 Gretna running back Daelyn Miller (8) rushes toward the end zone after making a reception in the first half against Radford. 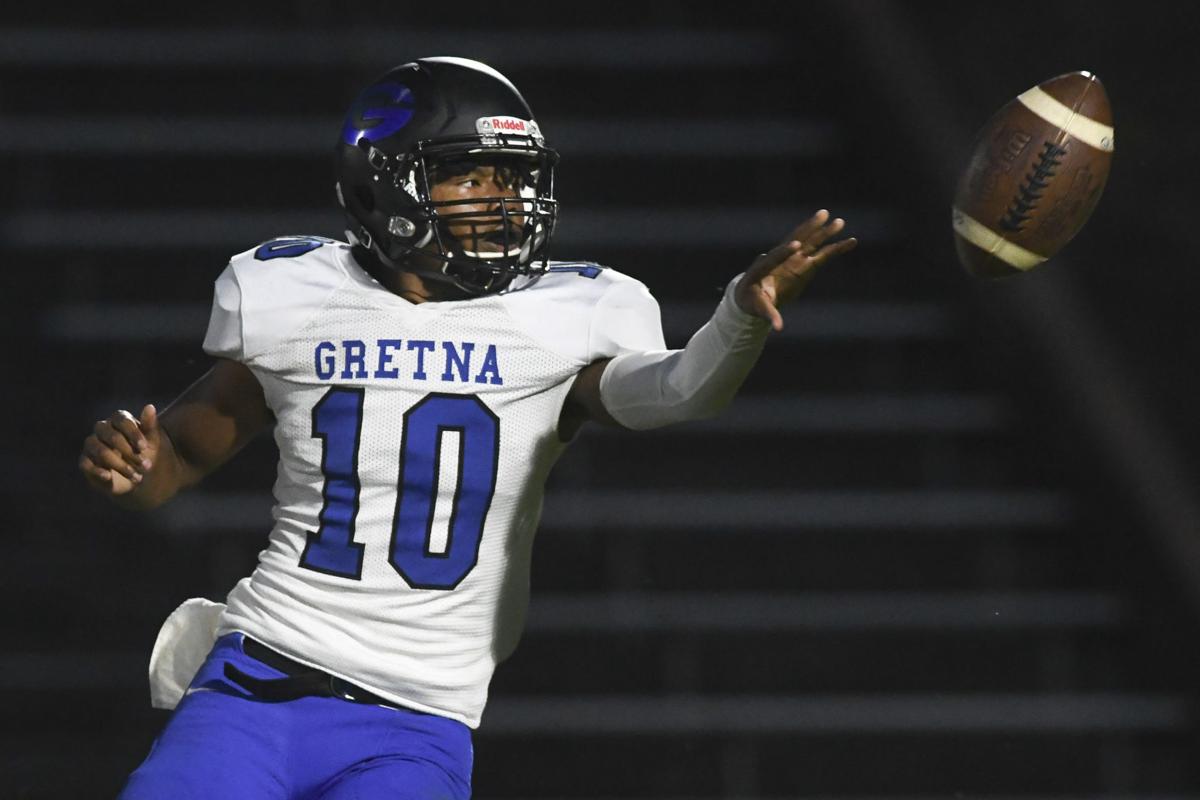 MICHAEL SHROYER | Special to The Roanoke Times September 20, 2019 Gretna quarterback Tabron Mabins (10) pitches the ball off in the first half against Radford.

Thanksgiving dinner can wait, if you let Jorden Berger have his way.

Berger, the senior at Gretna High, is excited to spend the holiday with relatives, sharing food and fellowship, sure. But rather than just one meal, he hopes this Thanksgiving offers a chance for two family get-togethers: one around the table and another at the place he spends much of his time: the gridiron.

When next Thursday morning rolls around, Berger hopes to be on his way to the school, strapping on cleats and putting on pads and a helmet as his teammates — his brothers who make up his “second family” — do the same.

“It’s one of the best practice days of the year,” Gretna coach Cole Simpson said.

But the Hawks will only take the field next week if their season is still alive.

Simpson, who’s experienced Thanksgiving day practices with past teams, hasn’t had the chance to bark out commands to players in Gretna on the holiday. Simpson’s five previous seasons with the Hawks have yielded nothing better than a first-round playoff win.

Last year, GHS picked up a region quarterfinal victory. Then the campaign came to a close in the region semifinals.

This year, the Hawks are in search of their third playoff victory since 2011 and their second of the season. It’s been eight years, too, since they’ve advanced to the region championship game and made that Thanksgiving practice a reality.

With talented players up and down the roster, though, and the momentum of three straight victories on its side, this year could be Gretna’s year, Simpson and his players say.

All that stands in its way is Radford. That pesky Region 2C opponent Gretna hasn’t been able to shake of late.

“They’re a pretty familiar opponent,” Simpson said of the Bobcats.

Friday’s semifinal matchup, slated for 7 p.m. in Radford, pits the region’s second and third seeds against each other for the second time this season.

Radford, the No. 2, enters with a 9-2 record and two consecutive shutout victories to its name. The third-seeded Hawks are 8-3. One of those three losses came in the regular season to the Bobcats.

And last year’s disappointing end came at the hands of Radford, too.

This year, the rematch once again determines who will vie for a region title.

There’s no doubt about whether this one means a little more. The hope of another week of practice and another game is on the line, of course, but so too are bragging rights — and for Gretna, a chance to finally prove it won’t always be the victim.

The series between the region rivals sits at 3-3 all-time. But Radford has won each of the last three, all of which have been decided by two touchdowns or less.

This year, the contest went to overtime, and Radford walked off the victor by one point, 21-20.

“It definitely adds fuel,” the running back added.

Berger’s ability to gain yards up the middle will be one of the Hawks’ main weapons Friday. At 6-foot-1, 200 pounds, Berger pounds the ball and has punished defenses to the tune of 1,258 yards rushing and 16 touchdowns so far.

He’s hardly the only player Radford will have to keep its eye on.

Berger makes up one part of the three-headed running monster for Gretna and its Wing-T offense. The other two are senior Daelyn Miller (1,401 yards) and sophomore Cam Mabins (729 yards).

“They’re the three guys that have gotten us to where we’re at,” Simpson said. “Certainly when you play us, you know they’re gonna get the ball.”

The trio has combined for 3,388 yards on the ground and averages first-down yardage with every carry.

“This is the second season running the offense that we have,” Berger said.

“We’re way more efficient than we were last year.”

The Hawks, thanks to the three, outgained Radford in yards of total offense 429-197 in the regular-season meeting, but still came up short. Radford, led by senior defensive end Ethan Hoffman (46 solo tackles and 20 tackles for losses), presents an imposing front that can pack the box and slow down Gretna’s run game.

Simpson is convinced his team is up to the challenge, though.

“I feel like we match up well,” he said. “Even as good as they are, we were able to get them blocked and put up a pretty big rushing number. We will need to duplicate that to get a win.”

Defensively, the Hawks — led by 6-2, 225-pound defensive end Corlyn Witcher (37 solo tackles, 10 sacks, 16 tackles for losses) — have to find answers for Radford dual-threat quarterback Zane Rupe, who’s racked up nearly 850 yards on the ground and passed for and additional 700-plus.

Darius Wesley-Brubeck, who has filled the running back position since PJ Prioleau went out early in the season with a knee injury, is a running threat, too, with 669 yards.

The other key for Gretna, Simpson said, is “doing the little things right.” That means protecting the ball — which the Hawks have struggled with in recent weeks and in the losses — not committing penalties and protecting well in punting and kicking situations.

Staying engaged mentally to prevent those mistakes, getting another big game out of its dangerous running duo and finding just enough stops defensively should be the recipe for a Gretna win against one of its biggest rivals lately. Then, it’s on to the Thanksgiving practice the Hawks are ready to finally taste.

“What would be special about getting this win would be able to continue on deeper in the playoffs,” Simpson said. “… The goal now is win each week and continue to play. … It would be sweet because that would mean we would be practicing again next week.”

MICHAEL SHROYER | Special to The Roanoke Times September 20, 2019 Gretna running back Daelyn Miller (8) rushes toward the end zone after making a reception in the first half against Radford.

MICHAEL SHROYER | Special to The Roanoke Times September 20, 2019 Gretna quarterback Tabron Mabins (10) pitches the ball off in the first half against Radford.