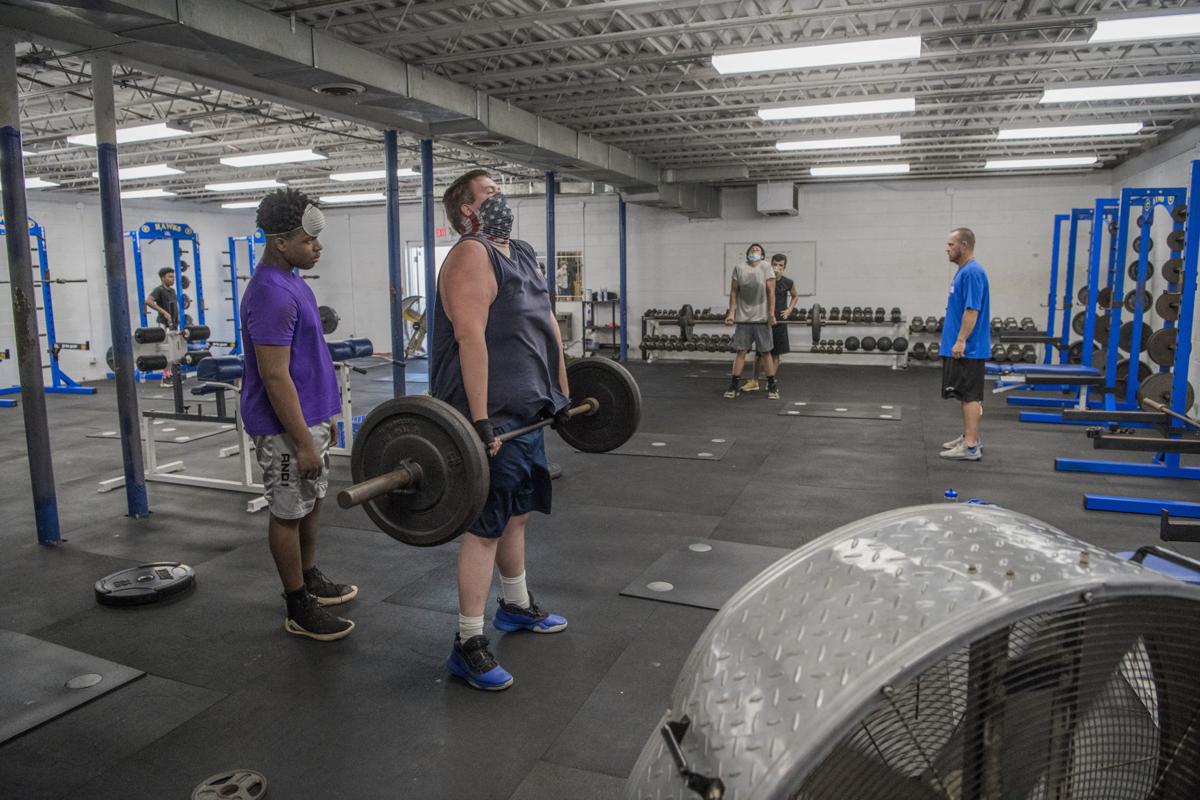 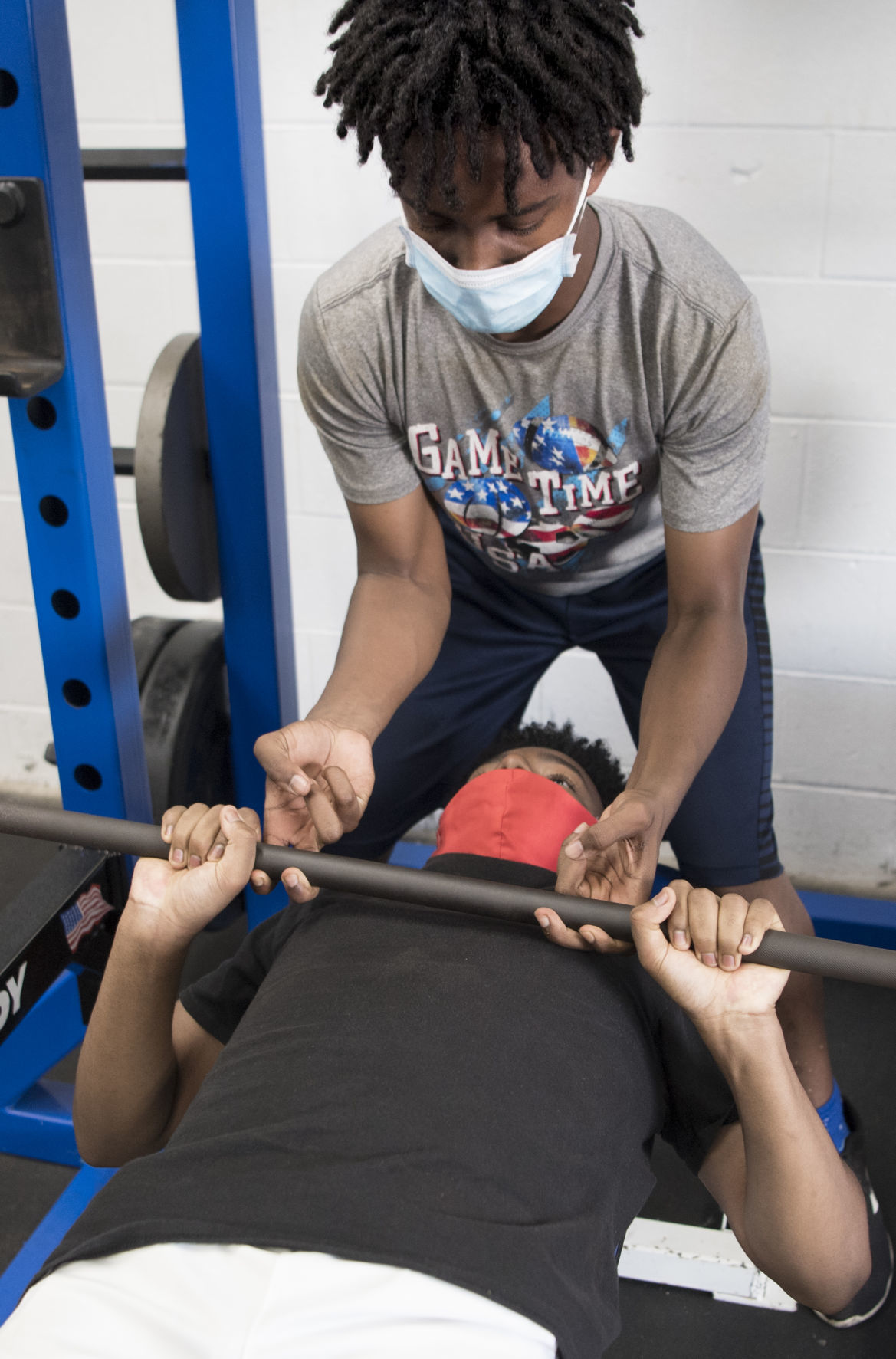 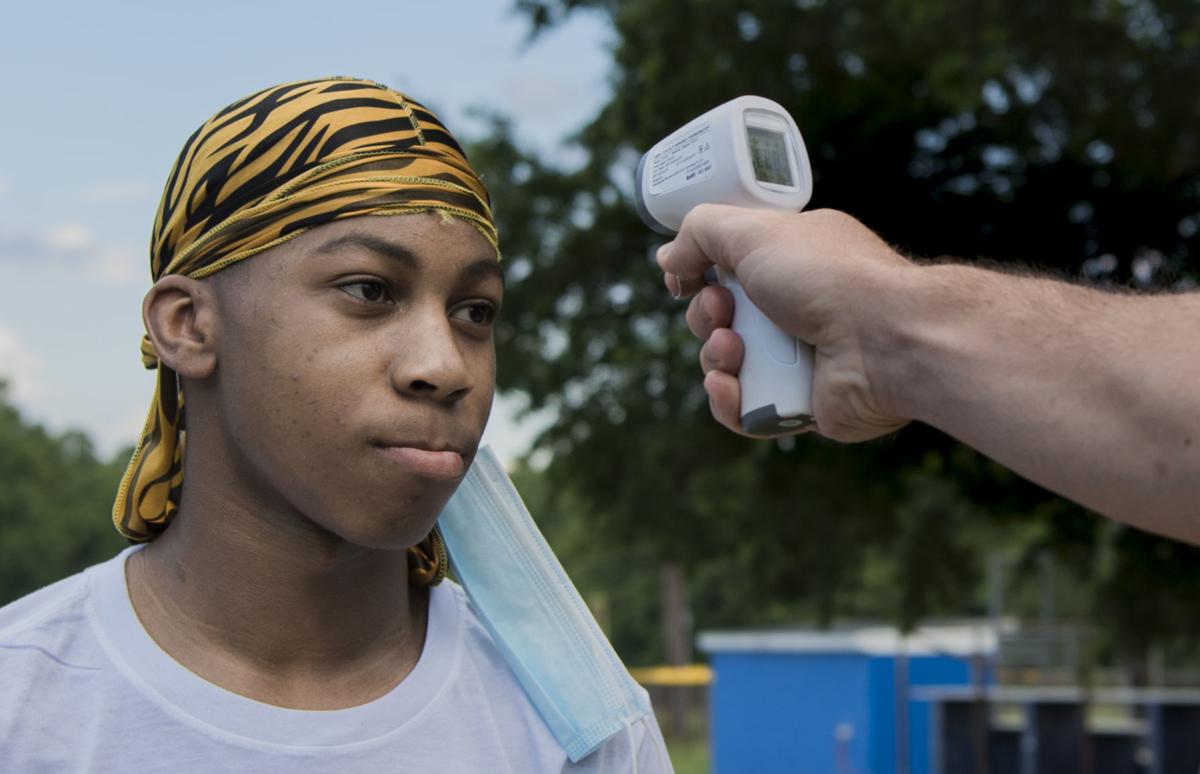 Gretna football player Kmari Chatten gets his temperature taken by coach Cole Simpson before working out Thursday in the weight room. 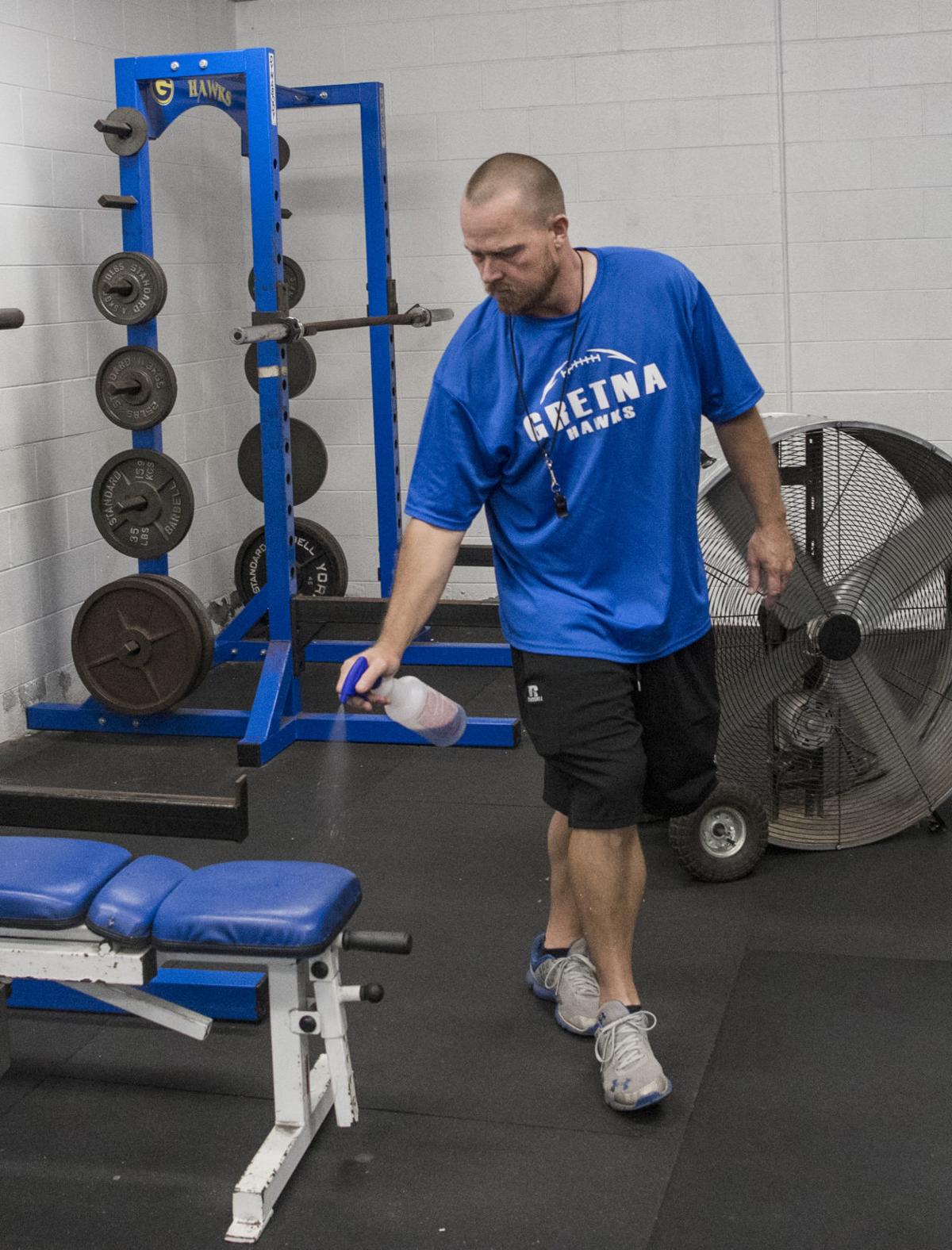 it may not have been the “normal” they expected for offseason workouts, but the return to the weight room this week for Gretna football players represented a step toward the normalcy that’s been absent in their lives for months now.

“I was sore the whole next day,” Onsley Baker, a rising sophomore lineman, said lightheartedly of the results of this week’s first workout. “But after you get back into it, it’s gonna be alright.”

Baker was among a small group of athletes to show up at the Gretna weight room for an hour-long lifting slot a few times this week. As one of a number of health and safety measures, lifting sessions at Gretna are capped at 10 athletes in the weight room at a time, with four total groups participating for one hour each.

Without knowing whether the fall season actually will happen — the Virginia High School League, after meeting Thursday, came to the conclusion there are too many unknowns amid the ongoing coronavirus pandemic to make any decisions about the fall for at least another month — Gretna is focused now “getting back into the routine of things,” coach Cole Simpson said.

The next few weeks will be dedicated solely to weight lifting, Simpson added, which gives athletes the opportunity to gradually get back the physical strength they may have lost during the layoff.

“All of them have put on 15 or 20 pounds,” Simpson said of his group. “… We need to get that weight they put on back to good weight.

“That first Monday was rough. We had several puking. Yeah, they’re out of shape. But that’s to be expected.”

The return also finally gives athletes some semblance of a predictable schedule.

“All the time they’ve had off with nothing to do, that’s not good for anyone,” Simpson said ahead of his team’s return. “That may be OK for a little while, but after three-plus months, it’s time to go back to work.”

And athletes now are getting back the camaraderie that was lost during the months away from the school.

“It felt really good being around friendly faces. It was tough. Really mentally challenging,” Baker said Thursday of the hiatus from instruction and offseason work, and interacting in person with teammates and classmates. “[I enjoyed], for a little bit, being out. But I kind of missed talking to them.”

Appomattox, the program coming off its fourth state championship in five years, also started its in-person offseason program this week. Like the Hawks, the Raiders are content now to lift weights and get back in shape through conditioning.

Other drills that would require contact or sharing balls currently are prohibited under VHSL guidelines.

Both programs, of course, are conducting workouts with safety as the top priority.

At Appomattox, coaches and athletes were required to watch a video on cleaning protocols, and parents had to give written permission for players to get back to the high school, according to athletic director Chris Dodge. Athletes, before exiting their cars, also have their temperatures checked before each session, with a temperatures of or above 100.4 precluding them from participation.

Coaches are taking on the responsibility of additional sanitizing of weight rooms at both schools.

In Gretna, a member of the coaching staff also conducts wellness screenings — asking a series of health questions to determine whether athletes have COVID-19 symptoms — before beginning workouts.

Inside and outside the weight room, athletes are spaced out, and the same pairs for lifting and spotting stay together throughout workouts.

The two Dogwood District schools are the first in the area to make their return. The VHSL allowed schools to begin offseason work starting last Monday — once school districts had submitted return plans that outlined how they would implement the Centers for Disease Control and Prevention and Virginia Department of Health’s virus mitigation measures — but getting all the pieces into place pushed Appomattox and Gretna’s start to this week.

In Gretna, Simpson initially thought a return might not happen until July, so he was glad he got to see his athletes this week — a development that took significant amounts of planning on his part, to ensure players all were in the right groups and had rides to the school.

Football programs in other districts, meanwhile, are hoping they can begin offseason work next month, with some, like Brookville, aiming to start up next week.

Teams for other sports are able to conduct offseason work now, too, with some additional squads in Appomattox — like basketball and swimming, which compete in the winter — taking advantage of the opportunity.

And while some fall sports like golf and cross country won’t have a hard time returning because of their low-risk nature and lack of physical contact, at least one sport — volleyball — is dealing with severe limitations like football.

VHSL guidelines currently prohibit the sharing of volleyballs entirely, which cuts out many drills used during practices. For that reason, Appomattox coach Mark Drinkard isn’t bringing his team back yet, despite other athletes already being back at the school.

“With the restrictions put in place, it’s difficult for us to do the things we need to do or want to do,” Drinkard said. “It’s hard to play volleyball when you have to clean the ball between sharing it at all.”

Drinkard said he is operating in wait-and-see mode, which reflects the sentiment of the VHSL.

“I hold out hope that we will play this fall,” Drinkard said. “I’m thinking a shortened season, hoping we will have some sort of a season.

“It’s almost a miracle at this point if we have a full season.”

Should there be concern around the Yankees?

Should there be concern around the Yankees?

Jefferson Forest's Zach Hinton was named Player of the Year and Cavaliers' coach Scott Zaring was Coach of the Year.

Knight became the first girl in school history to win a state singles title and the only female in this newspaper's coverage area to ever accomplish the feat.

Evan Mace's two-run double made the difference for the Cavaliers, who play at Amherst in the region semifinals on Tuesday at 6 p.m.

In Palmyra, Heritage junior phenom Alaysia Oakes won the 100 dash, 400 dash, long jump and triple jump and accounted for 46 points on her own …

After Further Review: The heart of a champion

The title is mine, Megan Knight said Saturday, and she meant it.

The 39-year-old Miller played at Gretna, graduated in 2000 and then continued his career at Elon University. He's been an assistant coach with the Hawks the last four seasons.

Hannah Pettyjohn began her Wednesday by setting a Jefferson Forest school record in the shot put at the Region 4D Track & Field Championships. Her throw of 39 feet, 7 inches gave her the region title, her third of the two-day event.

A recap of the day's high school events.

Gretna football player Kmari Chatten gets his temperature taken by coach Cole Simpson before working out Thursday in the weight room.