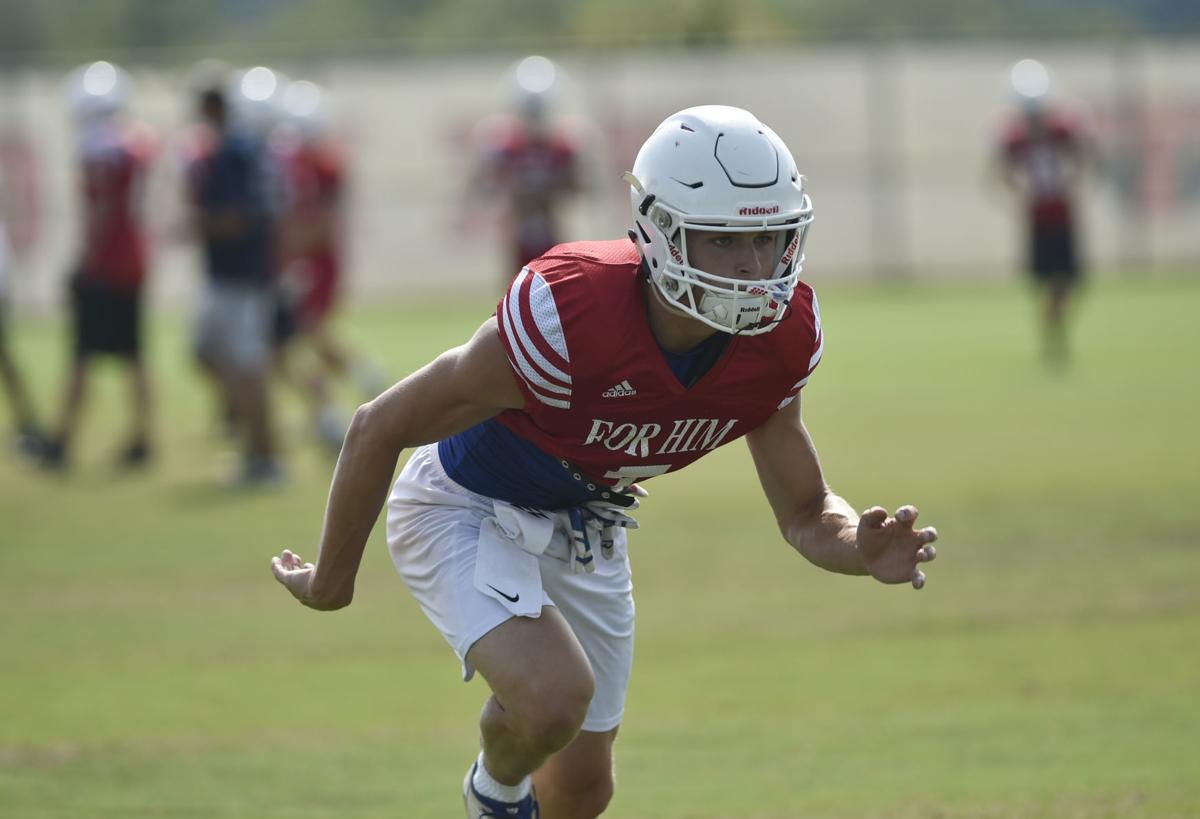 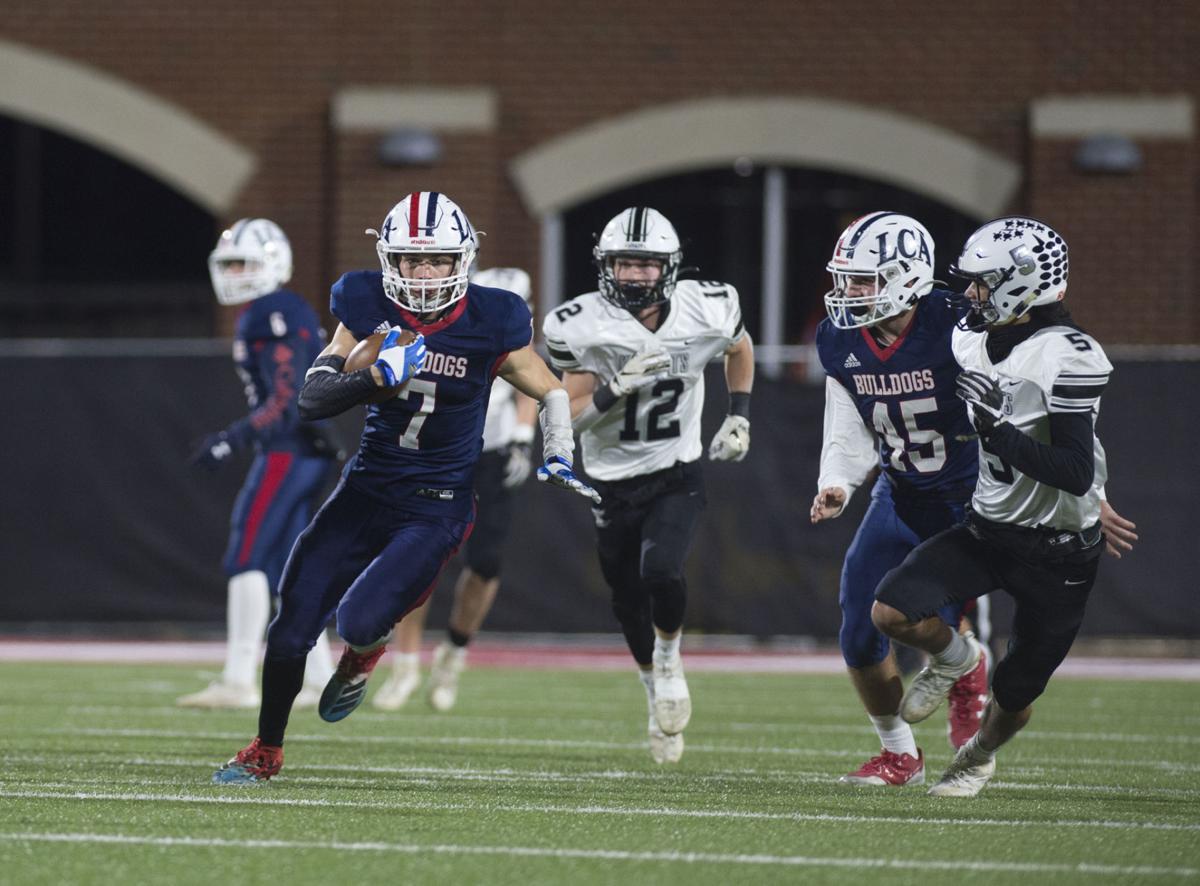 Liberty Christian's Tyler Rose, No. 7, runs down the field after hauling in a pass against Turner Ashby in Lynchburg on November 15, 2019. 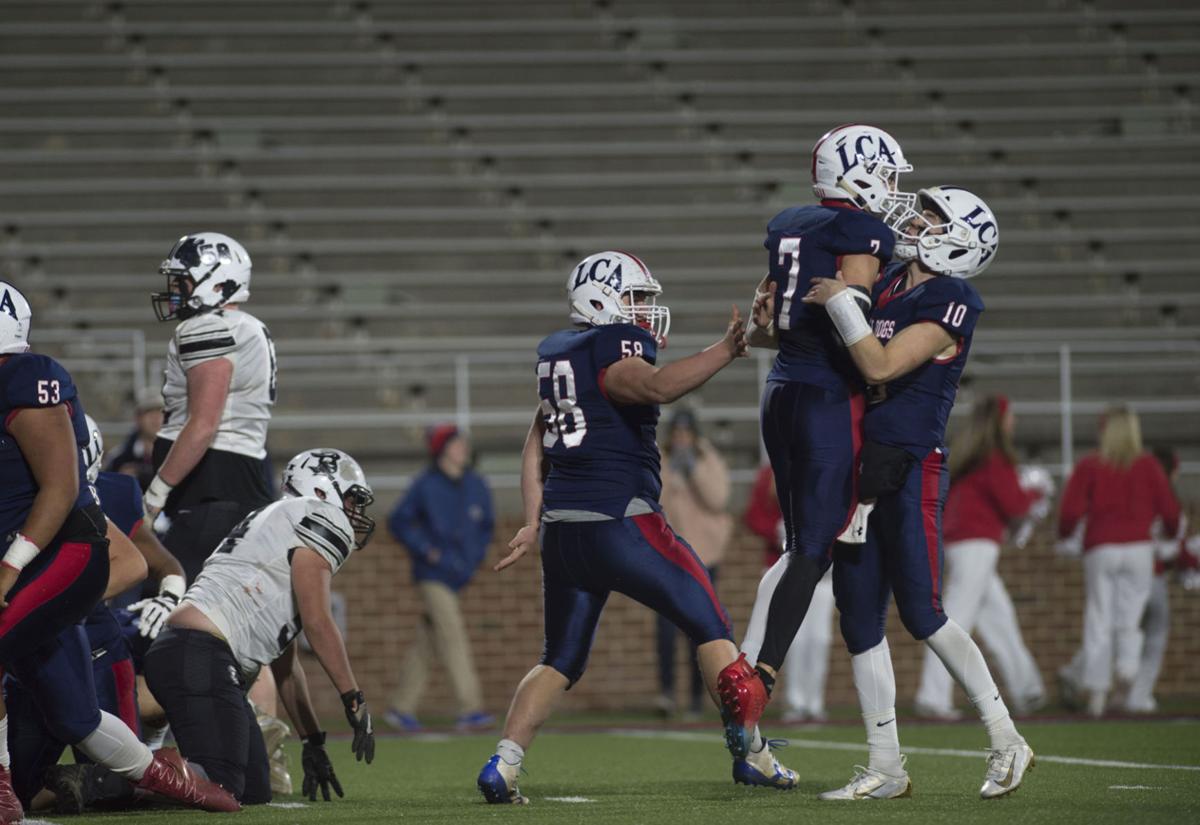 Tyler Rose, No. 7, and Josh Nelson, No. 10, celebrate a touchdown at the game between Turner Ashby and Liberty Christian Academy in Lynchburg on November 15, 2019.

In the future, it might be referred to at Liberty Christian simply as “the catch.”

Shocking, thrilling, awesome; none of those adjectives are too strong to describe the leaping and diving snare, which occurred under a trio of defenders in the first half and helped Liberty Christian take an early 7-3 lead over Turner Ashby in the first round of the Class 3 playoffs.

The catch left the crowd awe-struck. Rose’s teammates and coaches, however, weren’t surprised.

“We’ve had that trust for four years straight,” Nelson said of his receiver. “I know if I put it in the right spot, he’s gonna go get it.”

His hands, his ability to blaze past defenders after a catch, his tendency to run clean and crisp routes, all those things have endeared Rose to the LCA faithful over the years and caused opponents plenty of worry. And that’s why Bulldogs coach Frank Rocco refers to Rose as “the total package.”

With his team gathered around, Rocco reviewed the film from Friday’s win on Saturday. Rose was gone on an official college visit to William & Mary. Everyone else got to relive the catch.

“It’s kind of hard to see how he came up with it, to be honest with you,” Rocco said. “He’s very capable of making those kinds of plays because he’s a very explosive athlete. From time to time, he’ll kind of wow you that way.”

Back from his college visit Sunday, Rose announced via Twitter he had committed to play football at William & Mary.

He chose to play for Mike London and the Tribe after receiving offers from Army, Air Force, Campbell, Western Illinois and VMI. Rose also was offered a preferred walk-on spot at UVa and previously had been in talks with Liberty University.

But the 6-foot-2, 196-pound senior was impressed with certain aspects of William & Mary.

“He’s an all-around amazing dude,” Rose said of London. “And it’s more than just football. You go there, they’re gonna set you up for life with a degree. It’s like family. Every other place I’ve been to, nothing against those schools, but most of them are like a business. This is more like a family, so it’s something you want to be a part of.”

But before moving on to the college ranks, Rose has unfinished business at the high school level. The fourth-seeded Bulldogs (8-3) play No. 1 Heritage (10-1) on Saturday at City Stadium in the Region 3C semifinals. Kickoff is slated for 7 p.m.

This year marks the first time LCA has advanced past the opening round of the VHSL playoffs. The Bulldogs are playing with plenty of hope. And even though they lost to Heritage, 28-0, in the regular-season finale earlier this month, 2019 has produced a chance for them to contend for the Seminole District title and the best season since joining the VHSL in 2015.

Rose, an athlete who has occupied numerous roles in his football career, is one reason for that success. He has 44 catches for 685 yards and nine touchdowns, averaging 15.6 yards per catch.

“He has the best work ethic I’ve ever seen, out of anyone,” Nelson said. “I guarantee you that when the season is over, he’ll be back grindin’.”

Rose can’t recall a time when he didn’t play football.

He was around the game prior to beginning a tackle league at age 7. Rocco remembers Rose coming to summer camps at LCA when he was a kid. Even back then, the coach recalls, Rose was a diligent kid who wanted to become a solid football player.

He played quarterback until eighth grade, switched to running back for one season and then joined the LCA varsity team as a receiver his freshman year.

When Nelson arrived at the school as a freshman, the first person who introduced himself was the new receiver.

“And we’ve been kickin’ it together ever since,” Nelson said.

Nelson developed, of course, into one of the area’s best passing quarterbacks. The receiver spot, then, became a natural fit for Rose, whose highlight-reel catches have impressed fans the last few years.

“Probably just the fact that I get to go against the [defensive back] one on one, and being able to compete against whoever they line up on me,” Rose said when asked about his affinity for his position, “because whoever lines up in front of me, my goal is to humiliate them and make a play.”

It’s one thing to make a one-handed snare in practice; it’s another to do it during a game. But when Rose snatched Nelson’s 39-yard pass last Friday before crashing to the ground on his back, he made the feat appear easy.

“It’s one of those plays where everything is in slow motion,” he said, “from the time you see the ball, you follow it with your eyes. Just to be able to make that play for my team in that situation sparked the flame.”

He wasn’t surprised he made the catch, but maybe a little shocked by the circumstances.

“I didn’t even realize it was one-handed until afterwards,” Rose added. “Then I was like, ‘Wait a second.’”

As he progresses to the next level, Rocco expects Rose to continue to improve his understanding of the passing game and reading coverages.

“I’m really excited to see what the future holds for him,” Rocco added, “because he does have such a high ceiling.”

Liberty Christian's Tyler Rose, No. 7, runs down the field after hauling in a pass against Turner Ashby in Lynchburg on November 15, 2019.

Tyler Rose, No. 7, and Josh Nelson, No. 10, celebrate a touchdown at the game between Turner Ashby and Liberty Christian Academy in Lynchburg on November 15, 2019. 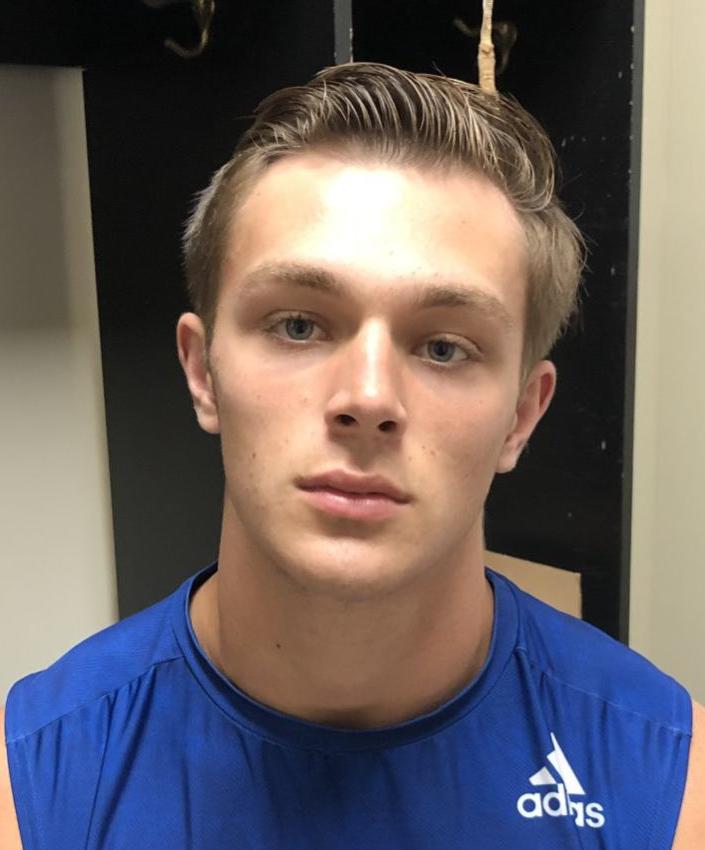