NFL says Steelers-Titans game being postponed amid coronavirus outbreak. Get the latest. 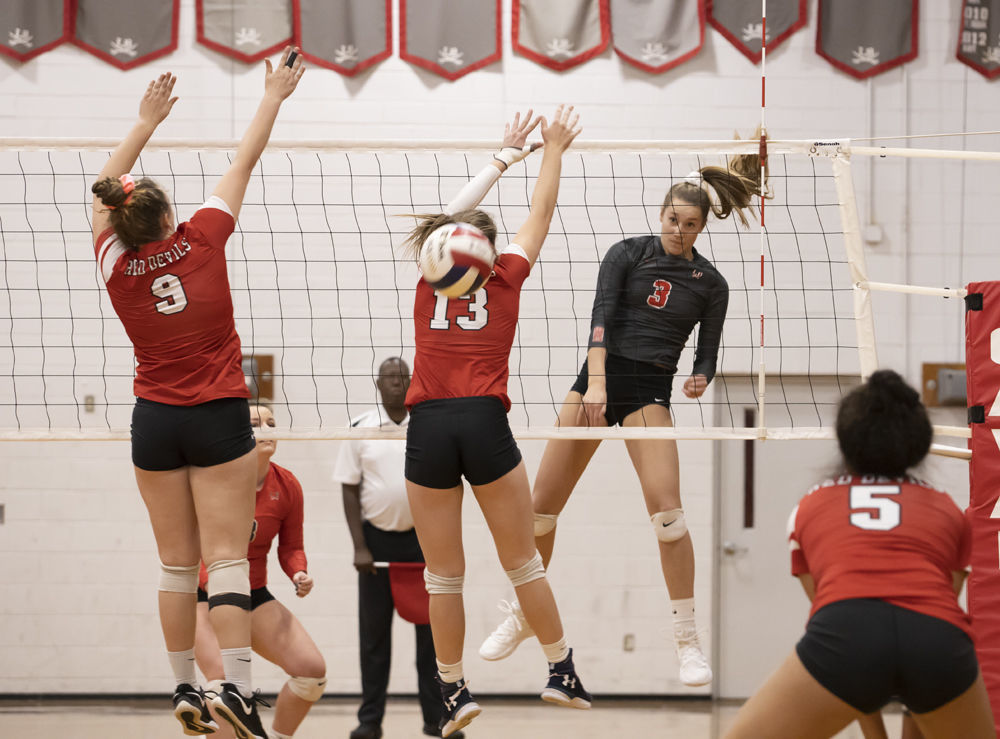 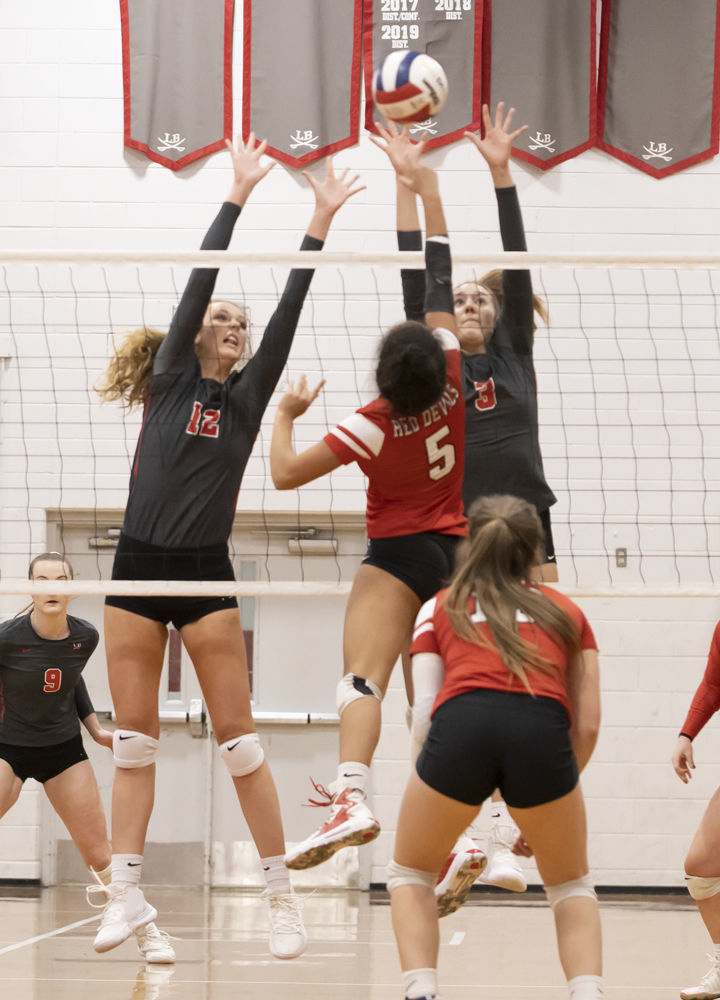 Rustburg's (5) Meah Coles tries to get the ball over Lord Botetourt's (12) Ryanna Clark and (3) Miette Veldman. 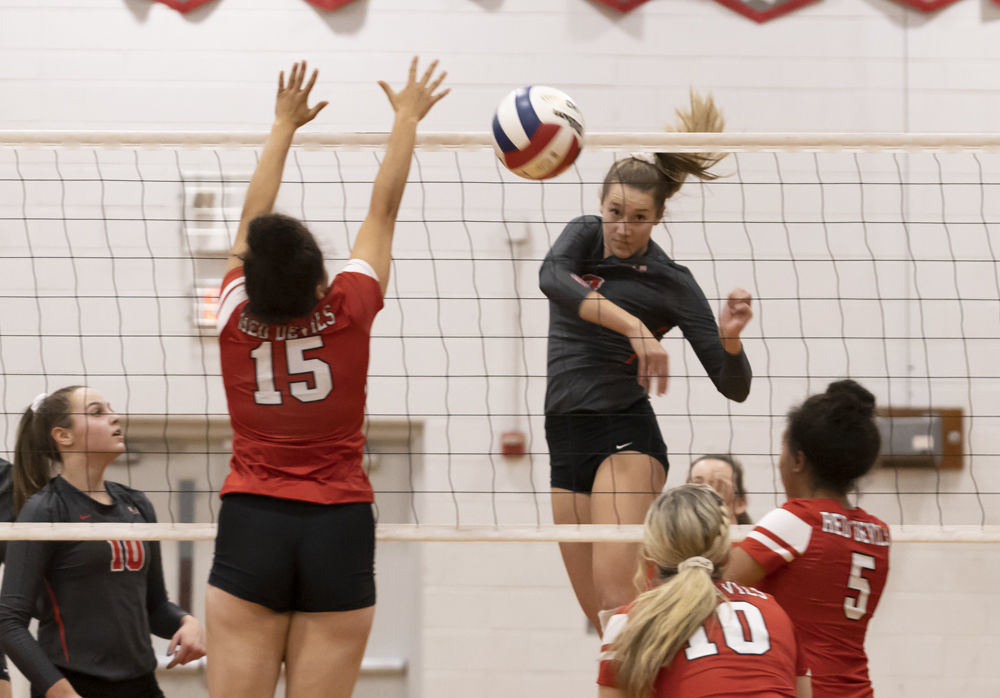 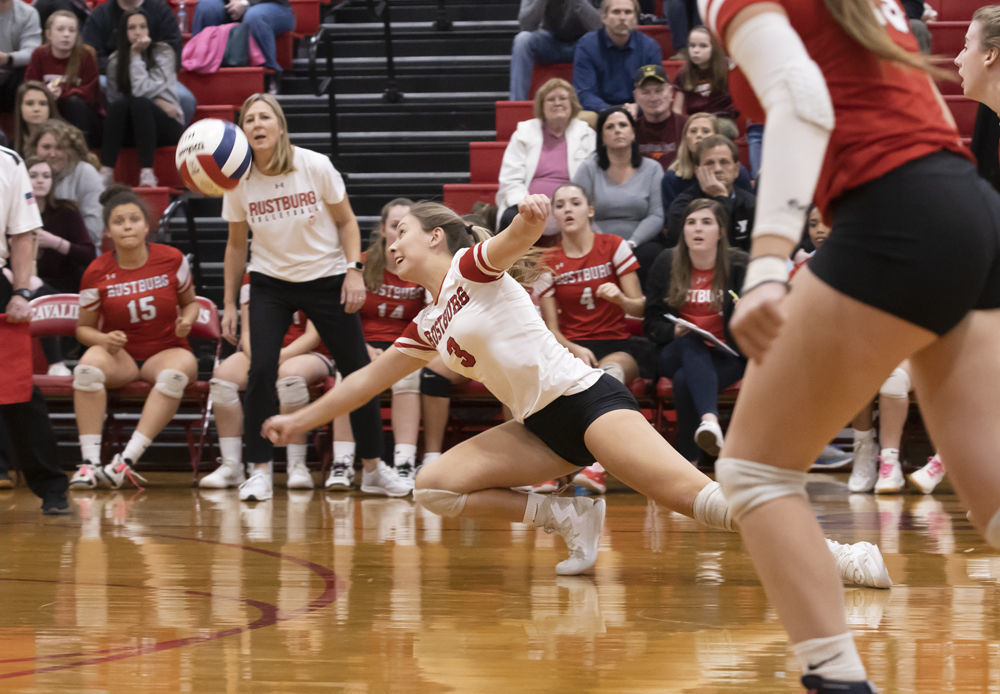 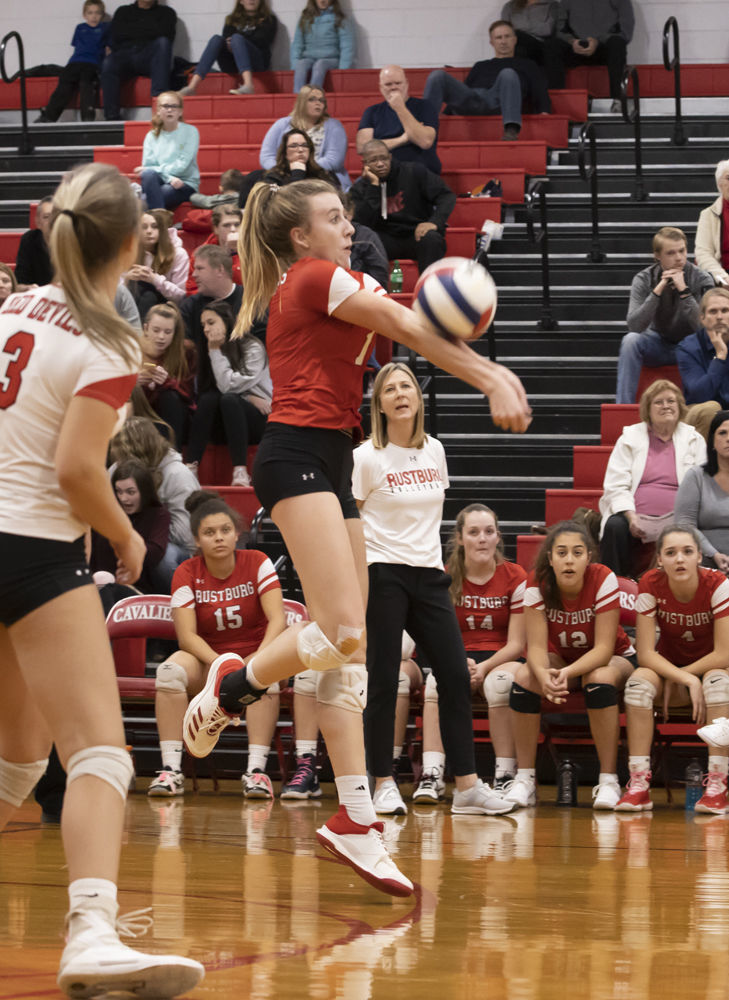 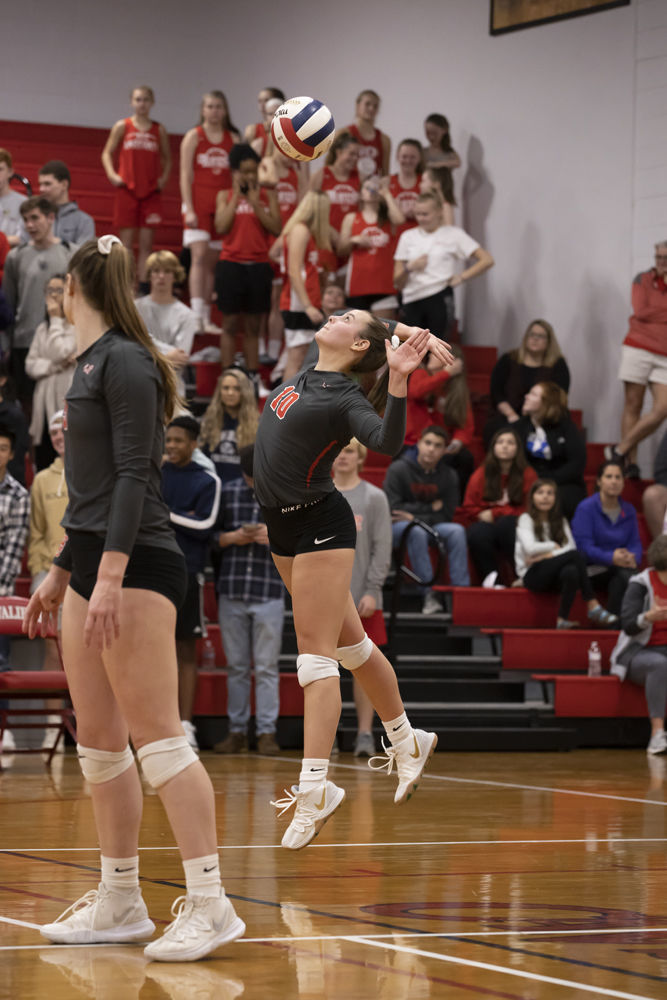 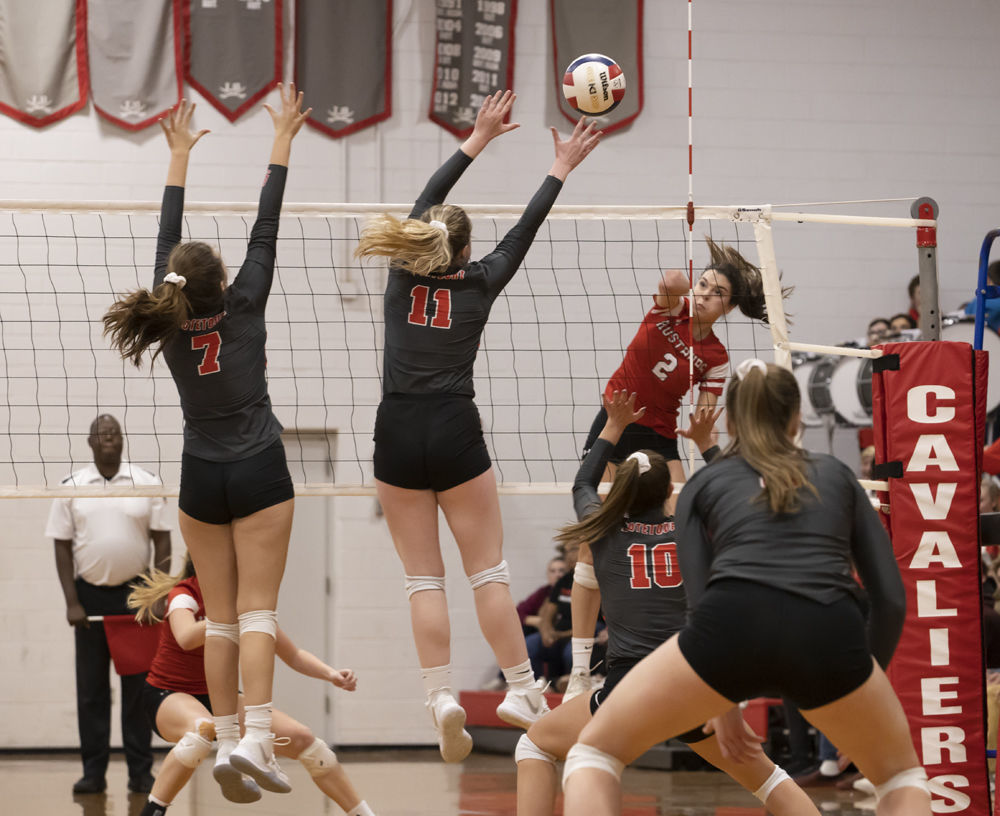 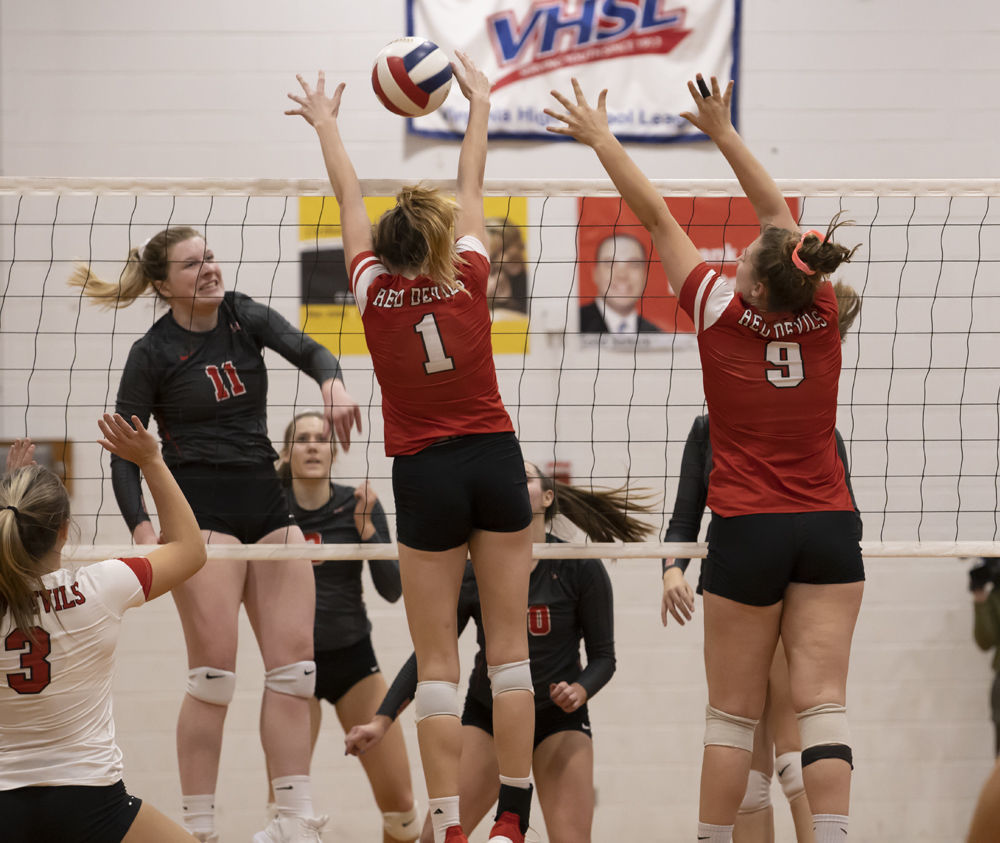 It was the final time seven Lord Botetourt seniors suited up on their home floor.

And when the match against visiting Rustburg was finished 65 minutes later, the Cavaliers had achieved their goal:

Another berth in the state final.

Botetourt continued its 2019 reign of invincibility as the Cavaliers scored a 25-12, 25-11, 25-11 rout to advance to Saturday’s 4 p.m. championship against Tabb at Salem Civic Center where they will pursue a third consecutive title.

The Cavaliers are 30-0 this season, 93-1 over the past three years. Their winning streak has reached 55 matches. They have played 85 sets and won them all.

Does Botetourt have any weaknesses?

“Not many,” Rustburg coach Kristen Hardie.

Complacency does not appear anywhere in the debit column.

Lord Botetourt, which has a 2-1 loss to Class 6 Frank Cox as the lone blemish on a three-year resume, has yet to suffer a mental letdown.

“They’re focused on what they want to accomplish,” Botetourt coach Julie Conner said. “The motivation is there. The focus is there.”

Throw in four blocks apiece from juniors Annelise Wolfe and Parker Hudson, and Botetourt was lobbing grenades from a brick wall.

Robertson joined an already loaded Cavaliers lineup when she transferred from Cave Spring, a program which had its third different head coach in three years in 2019.

The 6-foot UNC Greensboro signee has not looked back.

“Coming here has been everything I asked for,” she said. “It’s been so much fun being part of this team. The chemistry, we all get along so well on and off the court.”

Veldman set the tone with six thunderous kills from the left side in the first set.

“I’m against it every day in practice,” Robertson said of Veldman’s arm swing. “It’s not easy for other teams. I can tell you that. It’s so fun to watch her.”

“We don’t have a big block,” Hardie said. “She was just hitting over us all day long.”

“A lot of it was from the film,” Veldman said. “We got ideas of their tendencies, what they were going to do.”

Kristen Hardie used both of her timeouts in each set, and took one in Set 2 for some motherly encouragement.

“She struggled tonight and I hate that for her,” the Rustburg coach said of Kate. “I was trying to boost her confidence.

“I’m proud of my team. I knew we would have to play flawless to even have a chance.”

The Botetourt girls were mobbed at midcourt by a vocal student section, and they were serenaded much of the night by a lively pep band.

“This whole atmosphere is crazy, the band, the fans,” Robertson said. “You can tell the whole community wraps around the athletic program in general.”

Tabb will be the last VHSL team with an opportunity to put a stop to the Cavaliers.

“Right now it’s all happiness,” Veldman said. “I think it’s going to hit me, especially with Saturday coming up.”

Bigham, who was named this newspaper's freshman of the year in 2019, is one of a handful of top-notch pitchers who have garnered Division I attention in recent years.

Virginia Blair Trost, an E.C. Glass junior, has committed to play beach volleyball for South Carolina. She's the first player from the area to commit to play the sport at the NCAA level.

Layne plans to become part of a pitching staff that will include two other players from the Lynchburg area.

Bob Christmas, entering his 46th season as a coach, excited to rebuild Amherst during unprecedented times

At age 66, Christmas faces perhaps the biggest challenge of his storied career — rebuilding Amherst from smoldering ashes during the age of the coronavirus, which has placed unprecedented roadblocks in front of high school programs across the US.

Rustburg's (5) Meah Coles tries to get the ball over Lord Botetourt's (12) Ryanna Clark and (3) Miette Veldman.