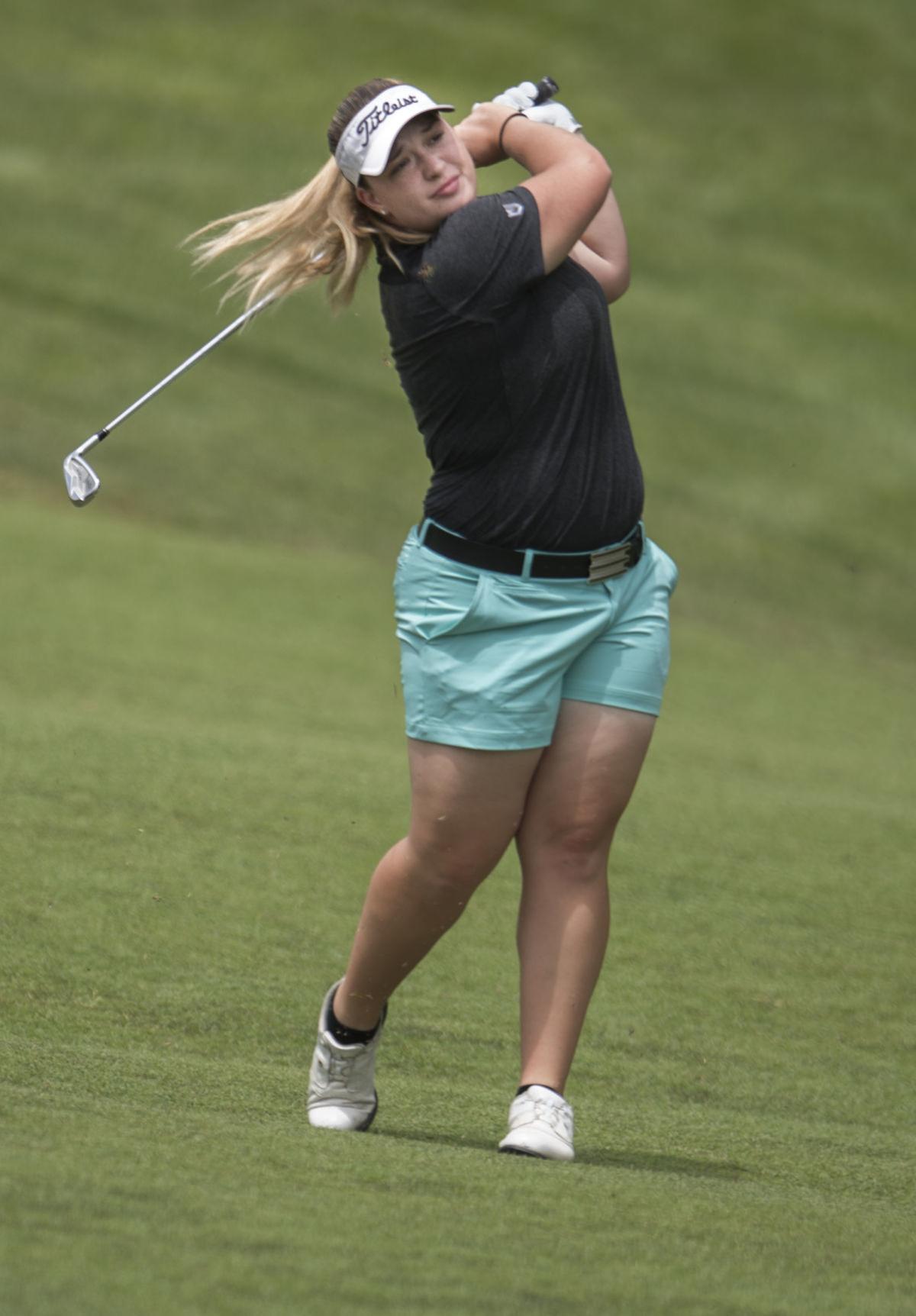 Marissa Kirkwood follows her second shot at No. 1 during Sunday's opening round of The Donna Andrews Invitational at Boonsboro Country Club. 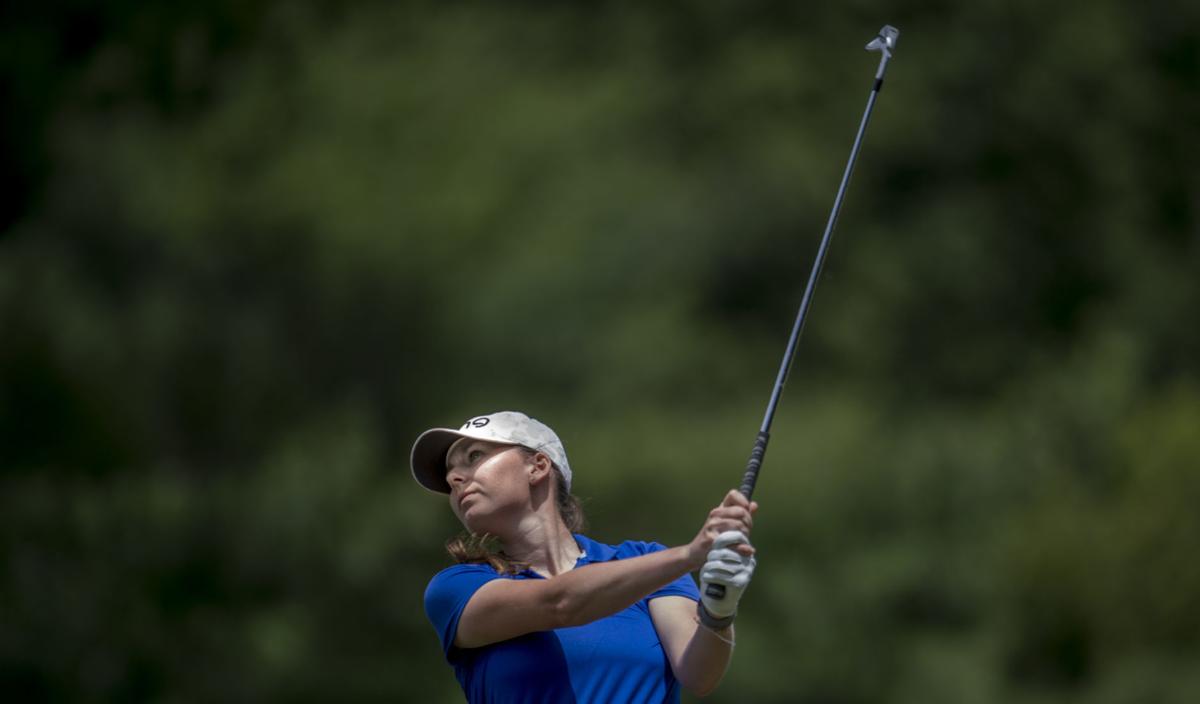 Jackie Rogowicz admires her tee shot at No. 5 during Sunday's opening round of The Donna Andrews Invitational at Boonsboro Country Club. 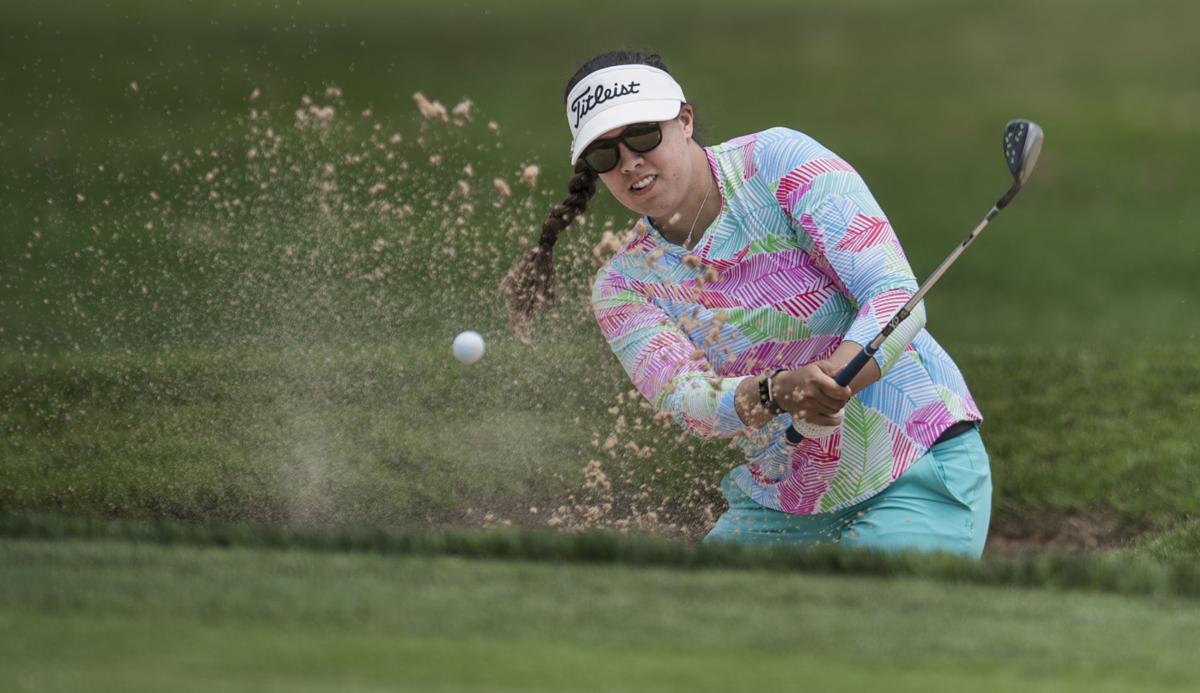 Lauren Greenlief blasts her shot out of the bunker at No. 4 during Sunday's opening round of The Donna Andrews Invitational at Boonsboro Country Club. 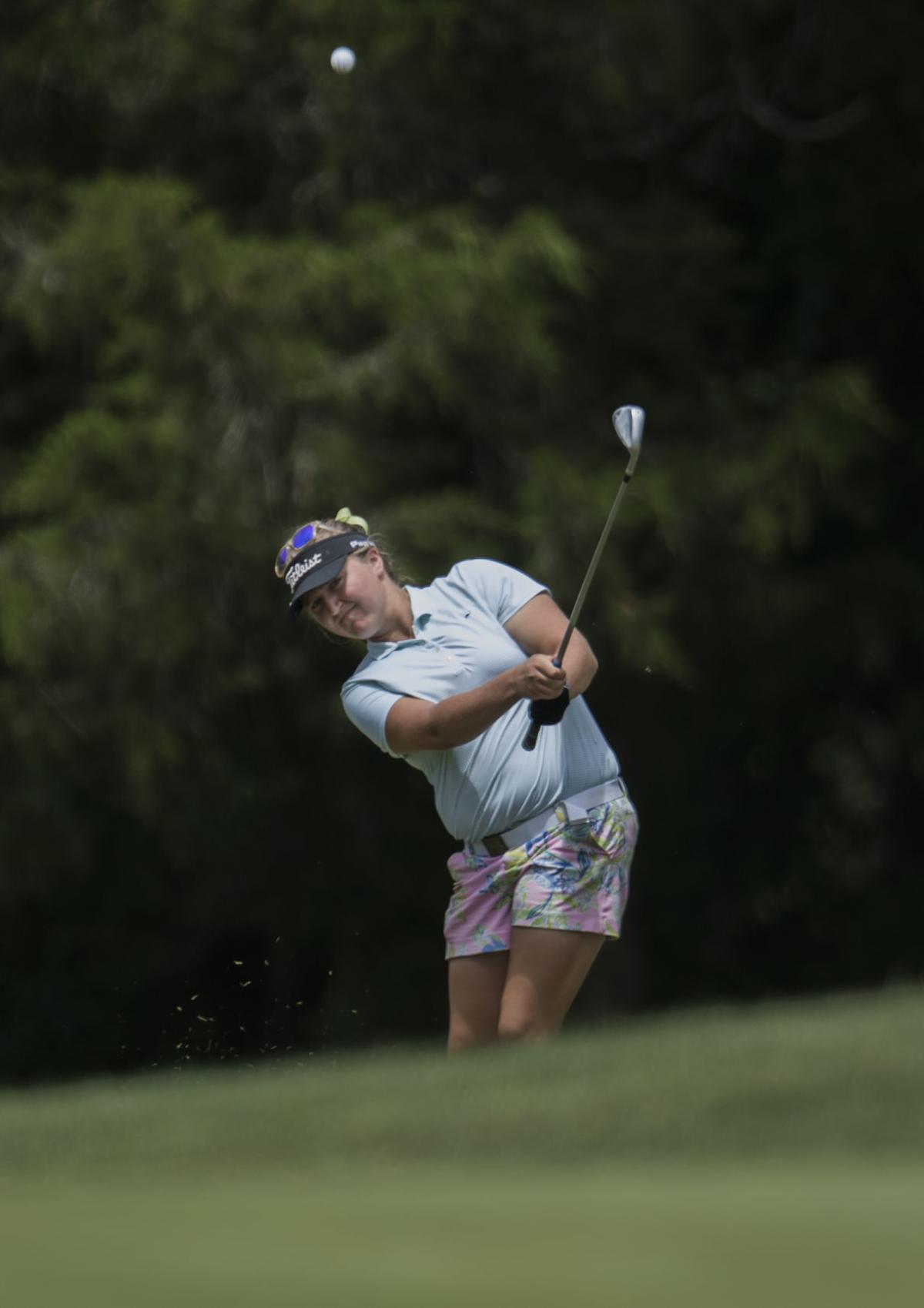 Katherine Schuster hits her approach shot at No. 1 during Sunday's opening round of The Donna Andrews Invitational at Boonsboro Country Club.

The lengthy break in competitive play because of the coronavirus pandemic was a blessing in disguise for Marissa Kirkwood. The time away from the golf course gave the defending champion of The Donna Andrews Invitational time to rest and allow a strained muscle in her neck to completely heal.

Healing wasn’t the only thing Kirkwood did during the pandemic. She eventually got back out on the links and used the extra time to refine her chipping around the green. The Kent State senior used all three wedges in her arsenal — the 50- and 54- degree wedges along with the commonly used 60-degree wedge — and steadily she became more confident in how she attacked her approaches onto the green.

Kirkwood used her chipping skills to save par and make birdie in a two-hole stretch on the front nine, then utilized her driving and putting skills over the back nine to put herself in contention after Sunday’s opening round of The Donna at Boonsboro Country Club.

Kirkwood was one of three golfers to post rounds under par Sunday; her 1-under 71 trails Alexis Florio by two shots heading into today’s second round.

“Those are kind of the shots that keep rounds together,” said Kirkwood, who finished her round with a birdie at No. 18 to get back to red figures. “I did a great job of that today. … Hopefully tomorrow I won’t give myself as many chip shots, but if I do, I know I’m ready and I’m confident with my chipping.”

Florio didn’t need to chip much while posting 3 under. The Columbia University rising junior, who hadn’t played a competitive round since the middle of February, quickly got into a rhythm thanks to birdies at Nos. 12 and 13.

Those shots propelled her to a 4-under tally on the back nine.

“I knew I could go low on the back if I stayed patient and put the ball in the right places,” she said.

Florio finished fourth in last year’s inaugural event, thanks to a final-round 69 that included six birdies. She learned a valuable lesson then that she used Sunday: stay below the hole to set up easier putts.

“If you were below the hole, you could be more aggressive with the putts,” she explained. “I did find them to be a little bit fast if I was above the hole, just because the greens are so sloped and undulating.”

Brynn Walker, who recently completed her senior season at North Carolina, sits in second at 2 under after making six birdies, two bogeys and one double-bogey.

Virginia Tech rising sophomore Becca DiNunzio is fourth after shooting even-par 72 with birdies at Nos. 6 and 15 to offset bogeys at Nos. 2 and 17.

DiNunzio did not three-putt during her round.

“Avoiding the big numbers is definitely key, and staying consistent,” DiNunzio said. “When you’re making pars out here, you’re definitely making up strokes on the field. I had to just stay patient with those just-missed putts and just know that if I keep doing what I’m doing, some will fall.”

Nine players are tied for fifth at 1 over, including Clemson rising senior Alexandra Swayne and last season’s third-place finisher Nicole Adam, and seven more players are within six shots of the lead.

“There’s a lot of good players out here that are playing in Division I colleges that are playing really well,” Swayne said. “That’s who I’m competing against in college anyway, so it’s good to play in a tournament that has them out here.”

Her second shot at the par-4 No. 6 landed in the rough to the left and in front of the green, and her chip shot landed inside 2 feet above the hole for an easy par putt. On the next hole, the par-4 seventh, she chipped from the back right rough and hit it perfectly to roll down the green for birdie.

“It’s huge, because you go from possibly making double to saving par, and those things can make or break a round,” Kirkwood said.

“I just needed to clean up that chipping and become deadly with my wedges,” she added. “I think once all that stuff starts lining up, I’ll start posting some really low scores.”

Roanoke native Kathryn Ha, the No. 2-ranked player in the Peggy Kirk Bell Girls (PKBG) Golf Tour Futures National division, shot 2-over 74 and leads Isabella Adkins by one shot in the Donna Division.

Jane Curtin and Mimi Hoffman each shot 3-over 75 and are tied for the Senior Division lead.

Kaitlyn Mosdell and Kathryn Ha spent about a half hour at the Boonsboro Country Club driving range Friday, separated by an empty slot, just li…

Tsiros, Lillie capitalize at No. 14, use momentum to take second-round lead at The Donna

The Donna Andrews Invitational field has found out through two rounds how challenging No. 14 at Boonsboro Country Club is with its downhill te…

Lillie pulls away to win The Donna with clutch pitch, steady play

Beth Lillie has fallen in love with the 58-degree wedge she carries in her golf bag. She uses it frequently in precarious situations, particul…

Marissa Kirkwood follows her second shot at No. 1 during Sunday's opening round of The Donna Andrews Invitational at Boonsboro Country Club.

Jackie Rogowicz admires her tee shot at No. 5 during Sunday's opening round of The Donna Andrews Invitational at Boonsboro Country Club.

Lauren Greenlief blasts her shot out of the bunker at No. 4 during Sunday's opening round of The Donna Andrews Invitational at Boonsboro Country Club.

Katherine Schuster hits her approach shot at No. 1 during Sunday's opening round of The Donna Andrews Invitational at Boonsboro Country Club.