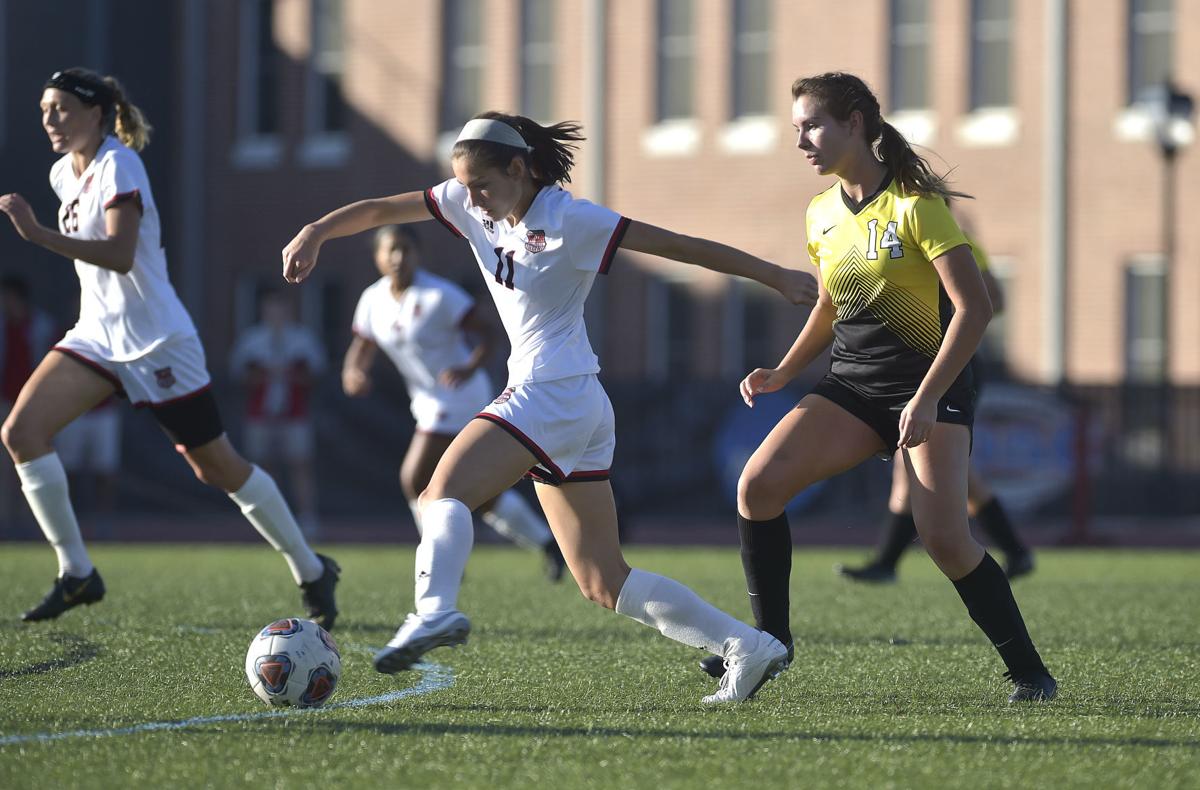 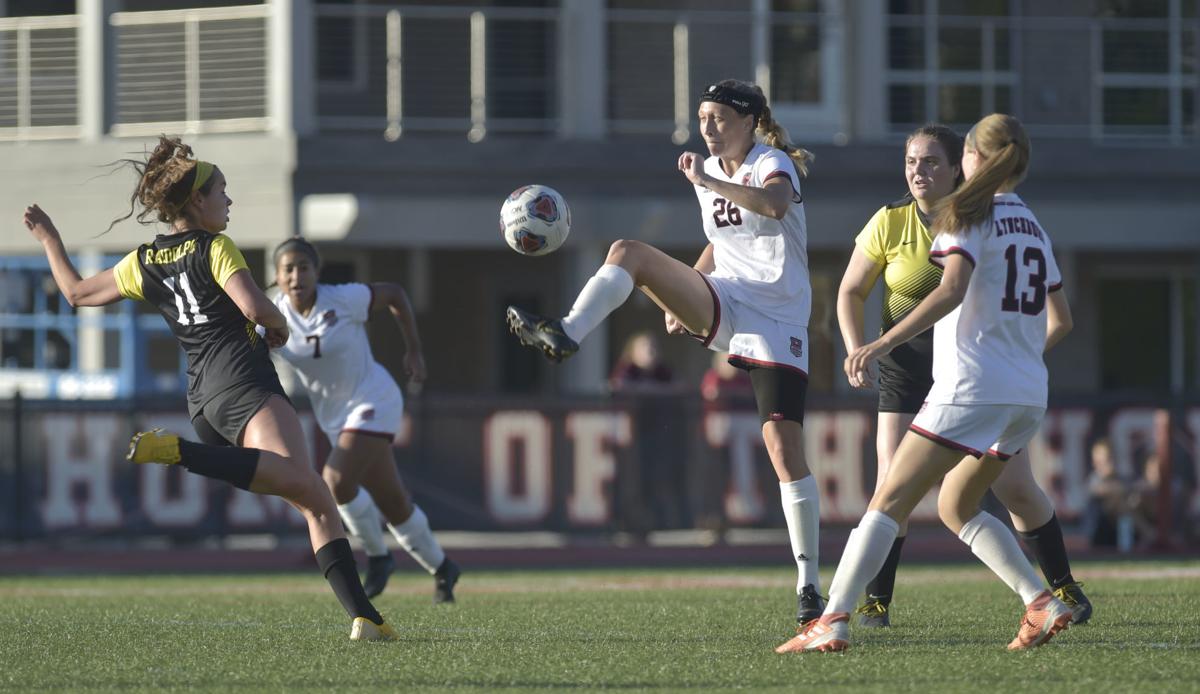 Lynchburg's Sarah Barnes kicks the ball during during the Hornets' win over Randolph at Shellenberger Field on Wednesday, Oct. 9, 2019. 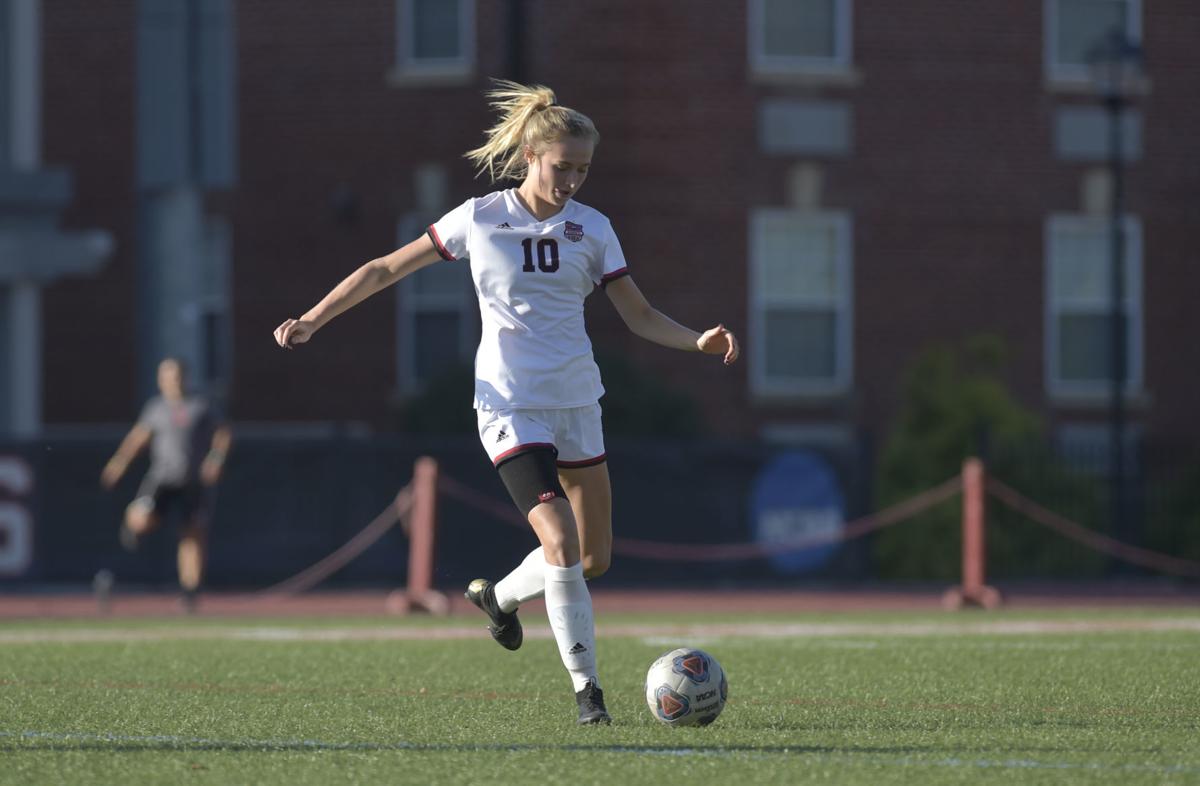 Lynchburg's Amanda Wigboldy sets to kick the ball during the game against Randolph at Shellenberger Field on Wednesday, Oct. 9, 2019. 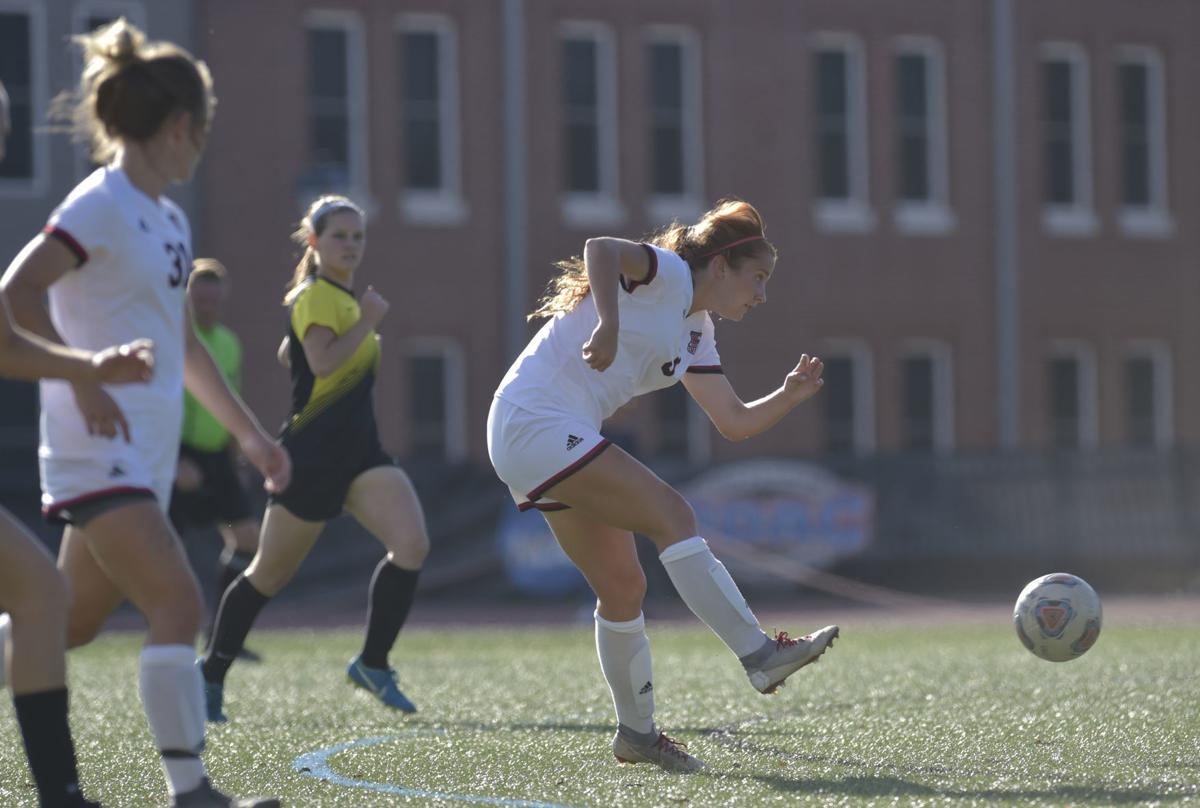 Lynchburg's Taylor Smith kicks the ball during the Hornets' win over Randolph at Shellenberger Field on Wednesday, Oct. 9, 2019. 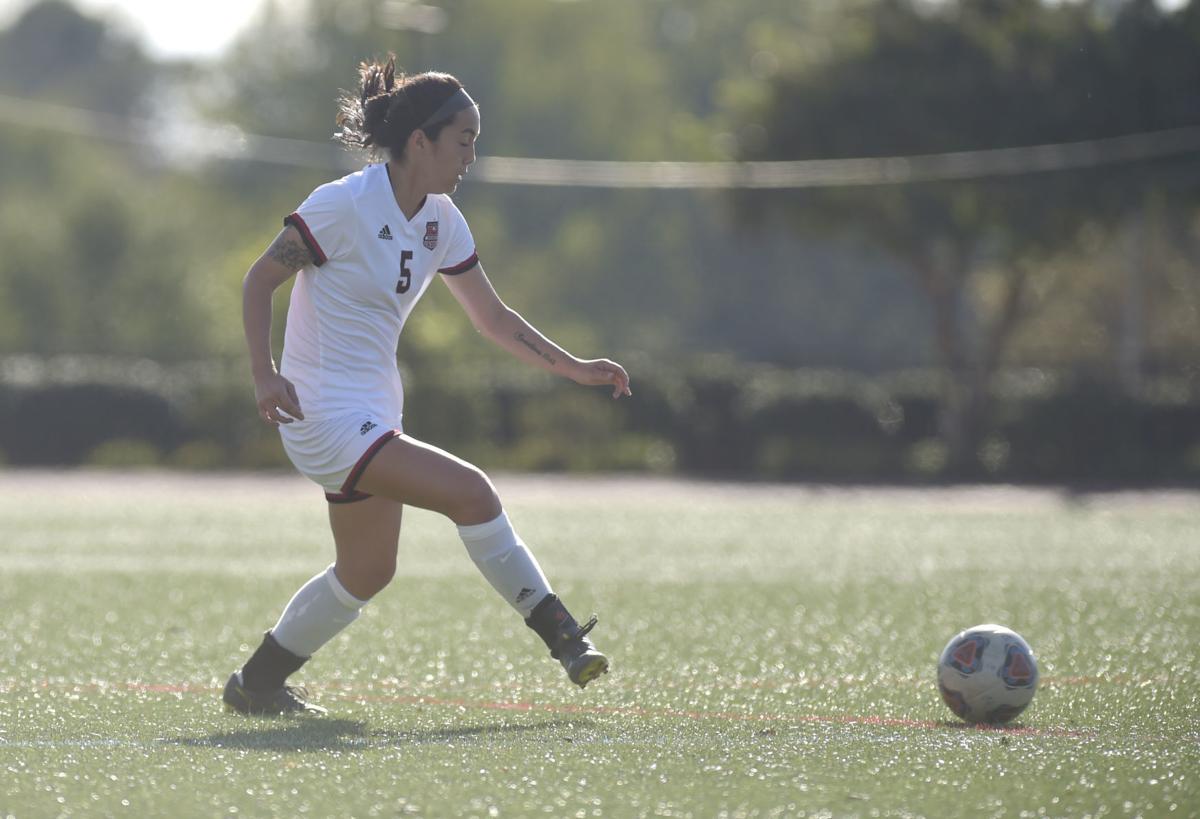 Lynchburg's Natalya Rodriguez kicks the ball during the Hornets' win over Randolph at Shellenberger Field on Wednesday, Oct. 9, 2019. 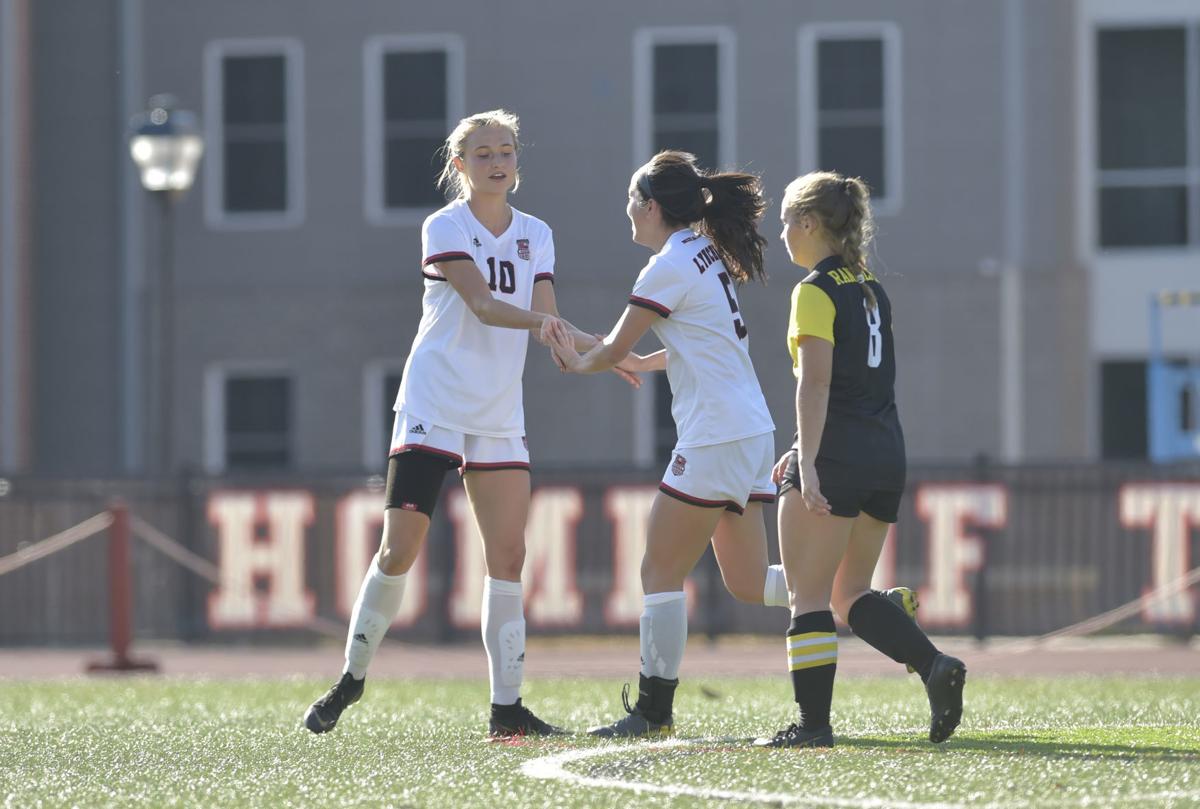 Amanda Wigboldy (left) congratulates Natalya Rodriguez after a Lynchburg goal during the Hornets' win over Randolph at Shellenberger Field on Wednesday, Oct. 9, 2019.

Lynchburg quickly made its way into the attacking half of the field and set up camp. For the vast majority of the game, the Hornets women’s soccer team held possession and as a result wore down Randolph, keeping a firm grip of bragging rights in the Hill City rivalry with a 5-1 victory Wednesday.

In the 35th meeting of the Lynchburg-based teams, the Hornets dominated from nearly start to finish. And UL (6-3-1, 2-1 Old Dominion Athletic Conference) kept its record against the WildCats perfect.

In the game’s first 45 minutes, Lynchburg sent an onslaught of shots at Randolph goalkeeper Zoe Waring. Twenty of the Hornets’ 29 total shots came in the first half.

Natalya Rodriguez sent a through ball to Emily Santana in the center of the field, and Santana beat Waring on the break.

Nine minutes later, former E.C. Glass standout Amanda Wigboldy knocked in her first goal of the day to give Lynchburg the only insurance goal it needed for the win.

“I think the first one was more of movement off the ball,” Wigboldy said of the score, the first of her two goals on the day, “but the second one was just lucky. I was at the right place at the right time and able to finish it off.”

Wigboldy was at the right place at the right time to notch her second goal of the day in the 53rd minute. After a flurry of activity in front of the goal following a Lynchburg corner kick, Wigboldy picked up the rebound near the right side of the 6-yard box and buried a shot in the opposite side of the net.

Wigboldy, a sophomore midfielder, earned her first multi-goal performance of the year with the two scores and drove her goal total up to five on the year, good for the team lead.

“I’ve watched her for years and we’ve known the level she’s at. She’s very special, has very technical abilities [reflecting those of] a Division I player,” Lynchburg coach Todd Olsen said of Wigboldy, who transferred from Division I William & Mary in the offseason. “I think she just had to adjust her mindset, and now she’s slowly coming [into her own]. She’s starting to be more physical, starting to have more control of the game. At first I think she was a little afraid to step out too much or overstep until she earned her spot. And I think now people appreciate what she is and the level of player she is.

“ … I don’t think we’ve seen what she can do yet. She hasn’t unleashed it yet, so I think once she unleashes it, we’re gonna have an All-American.”

Wigboldy’s second goal was one of two the Hornets earned off corner kicks. In the 52nd minute, Sanchez also knocked in a ball that rebounded off a Waring save. UL, which had 16 corners to Randolph’s 0, moved quickly on that restart, catching the WildCats out of position defensively.

“A big thing at practice has been working on corner kicks, because we’re not the biggest team. So it really comes down to making sure you’re in the right place and making sure everyone’s going all in and selling out every time,” Sanchez said.

Sanchez capped the scoring for the Hornets, who played 33 total players to Randolph’s 17, in the 56th minute.

The WildCats (4-4-2, 0-3 ODAC), longtime coach Kevin Porterfield said, have some work to do when defending set pieces, but praised Waring’s performance in goal.

Waring, a sophomore, came up with 15 saves.

“Wish it was more,” she said matter-of-factly after the game.

The biggest positive for the WildCats, though, came in the 57th minute, when Hannah Bane scored Randolph’s lone goal on a free kick from about 25 yards out.

Bane, a defender, typically doesn’t earn the headlines like her twin sister, Sara Bane, does. Sara has scored 10 goals on the season. But Wednesday, it was Hannah who was the headliner, as she scored her first collegiate goal.

Lynchburg’s only real mistake ultimately led to the goal. Backup goalkeeper Laura Mason, for the second time in three minutes, came way out of the box trying to make a stop, but instead took down a Randolph player and picked up a yellow card.

It was her second of the day, resulting in a red card and Lynchburg playing the final 33 minutes a player down.

And as she did on the free kick after the first foul, Bane sent the second attempt arcing over the player wall and into the goal, getting plenty of bend and height on the shot to beat new UL keeper Kate Duncan.

“I don’t think she was expecting it to go to the exact same spot. Just hit it a little bit harder, little bit faster. … Put it on frame and hoped for the best,” Bane said. “ … As a defender, you’re not expected to score, so when you do, it’s like, ‘Wow.’ … It’s the best. Best feeling scoring against Lynchburg.”

The goal marked the first time Randolph had scored against Lynchburg since 2001. Since that game 18 years ago, the Hornets have outscored the WildCats 137-0 and now own a 232-12 scoring advantage all-time.

“For us to get on the scoreboard with a team like Lynchburg, that’s always a positive thing,” said Porterfield, whose squad made Wednesday’s game the closest in the series since a 4-0 loss in 2009 and marked just the ninth time in 35 meetings a game has been decided by four goals or fewer.

Charlie Patterson, a 6-foot-6, 278-pound offensive lineman from Roswell, Georgia, has become the 16th football prospect to commit to Virginia for the 2021 season.

Lynchburg's Sarah Barnes kicks the ball during during the Hornets' win over Randolph at Shellenberger Field on Wednesday, Oct. 9, 2019.

Lynchburg's Amanda Wigboldy sets to kick the ball during the game against Randolph at Shellenberger Field on Wednesday, Oct. 9, 2019.

Lynchburg's Taylor Smith kicks the ball during the Hornets' win over Randolph at Shellenberger Field on Wednesday, Oct. 9, 2019.

Lynchburg's Natalya Rodriguez kicks the ball during the Hornets' win over Randolph at Shellenberger Field on Wednesday, Oct. 9, 2019.

Amanda Wigboldy (left) congratulates Natalya Rodriguez after a Lynchburg goal during the Hornets' win over Randolph at Shellenberger Field on Wednesday, Oct. 9, 2019.