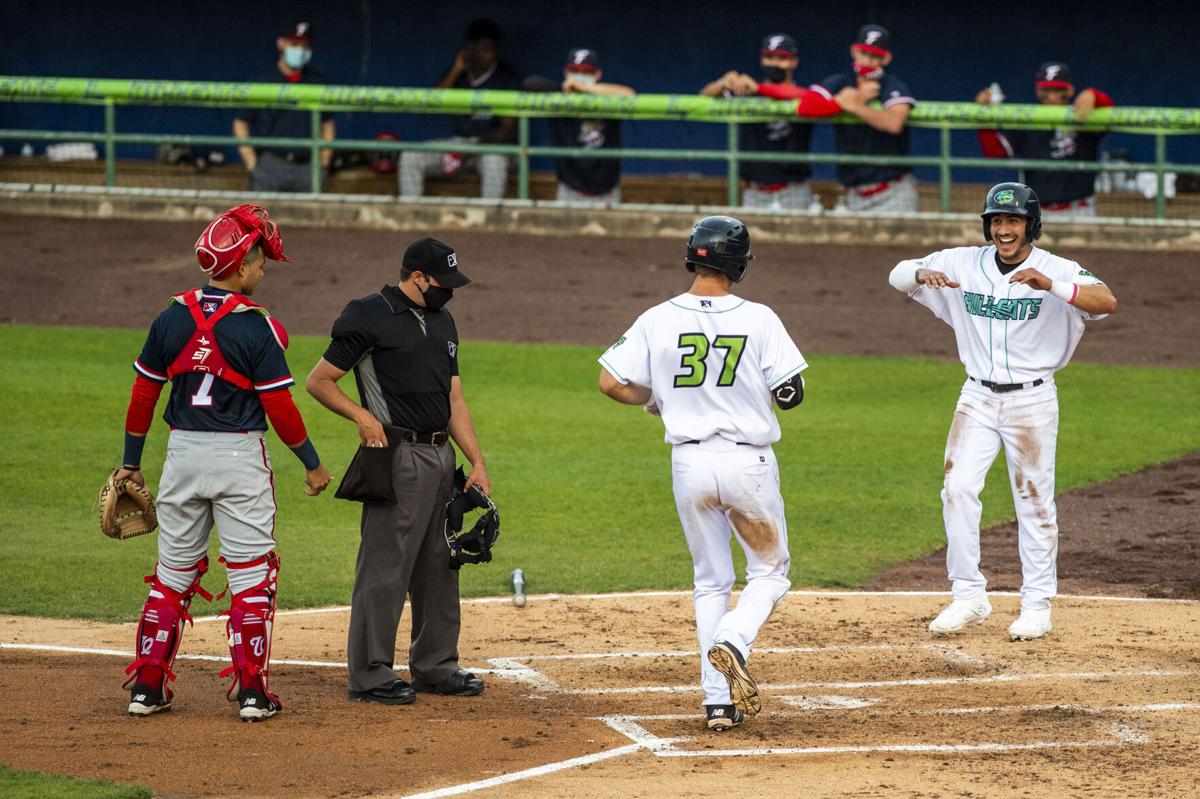 Hillcats outfielder Julian Escobedo celebrates with Micah Pries, who crosses home plate after his home run during the season opener against the Fredericksburg Nationals on Tuesday night. 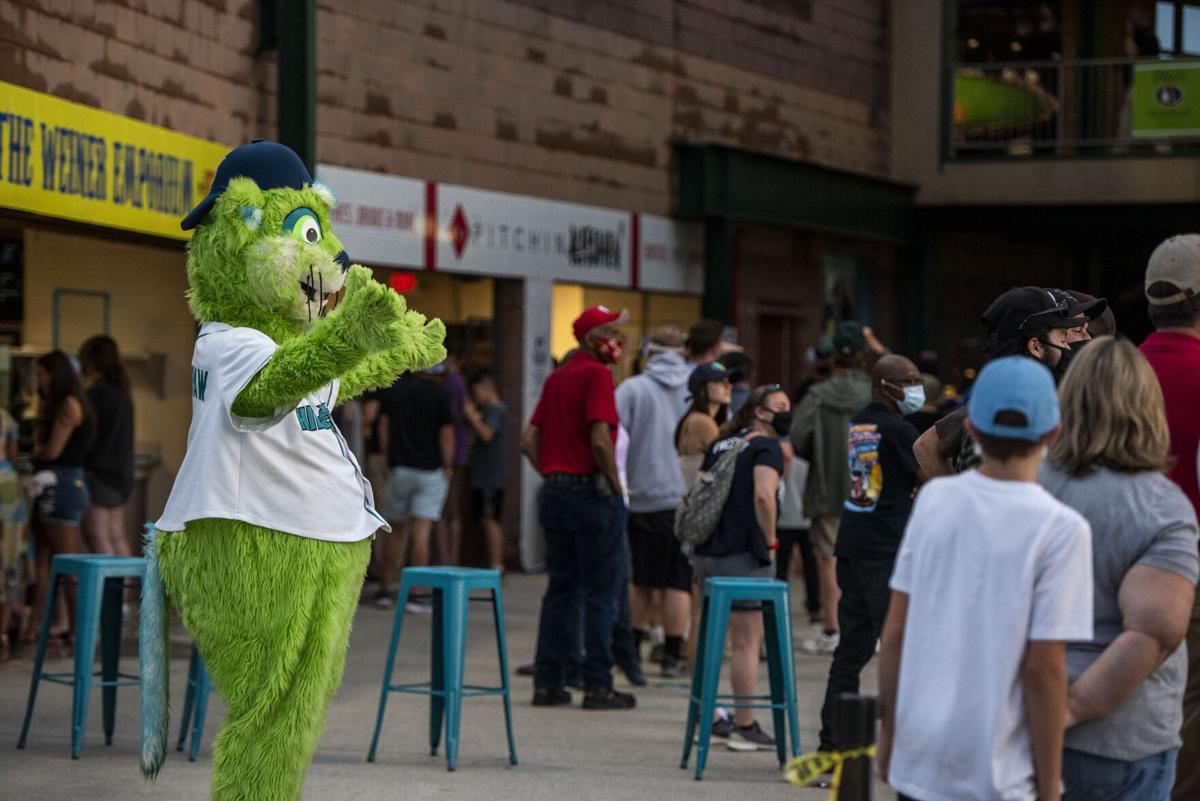 Hillcats mascot Southpaw poses for a socially distanced photo with a fan during the season opener against the Fredericksburg Nationals on Tuesday night. 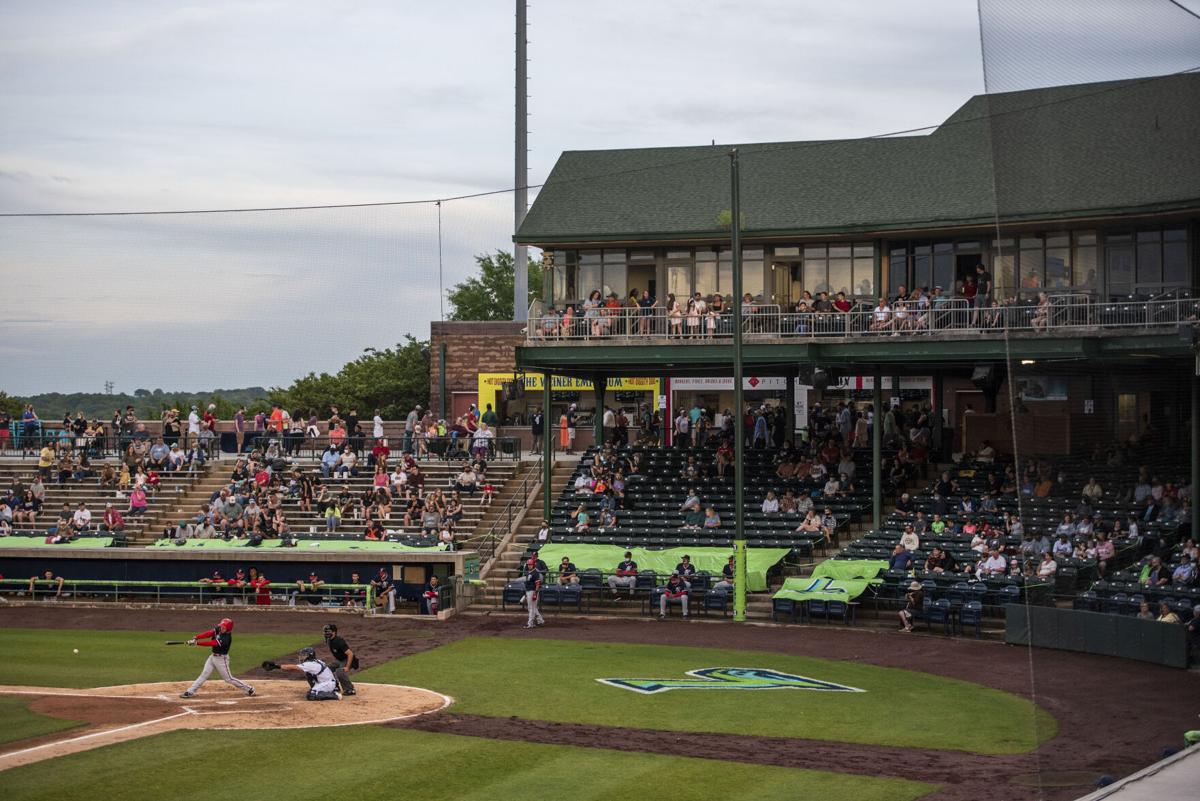 Fans fill the stands at the Bank of the James Stadium as the Hillcats take on the Fredericksburg Nationals during the season opener. 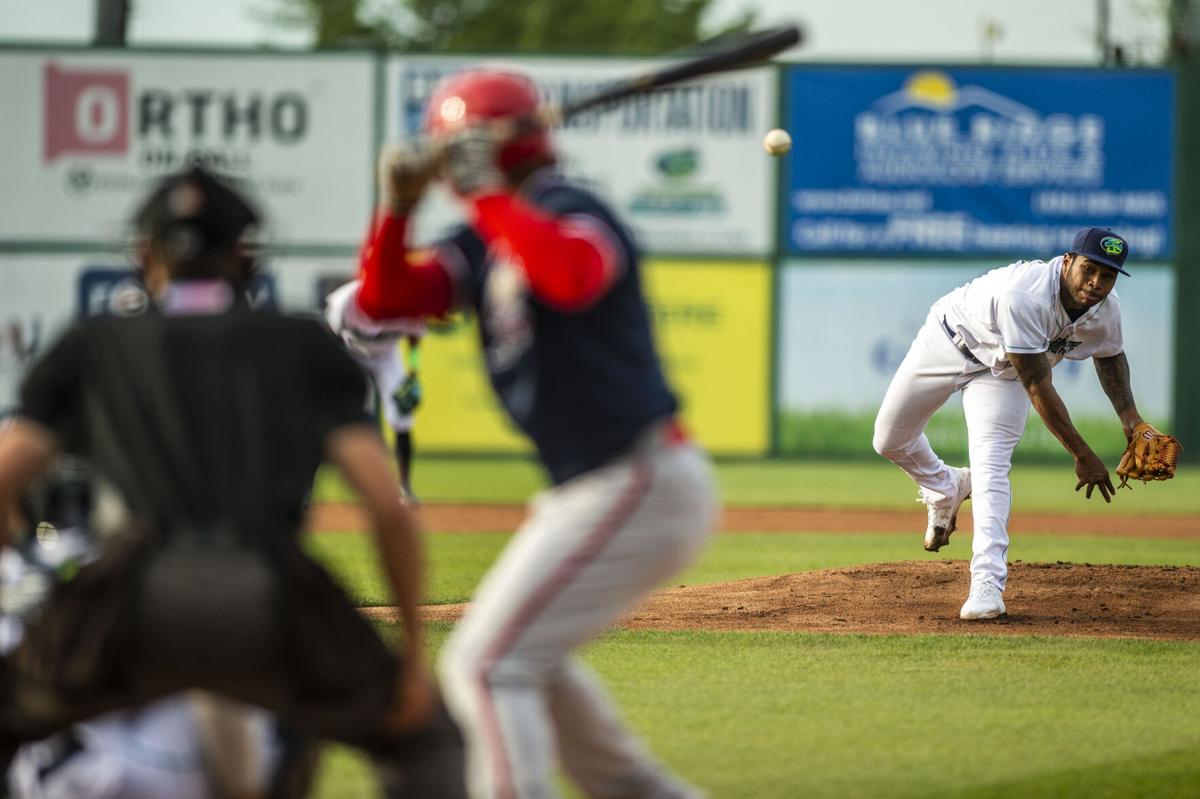 Hillcats pitcher Daniel Espino pitches during the season opener against the Fredericksburg Nationals on Tuesday night.

A year after forces outside of human control scuttled the entire 2020 Minor League Baseball season, the Lynchburg Hillcats faced another threat in the hours ahead of their planned return.

Thanks to strong thunderstorms that bowled through the area, the 2021 debut looked to be in jeopardy. Hillcats staffers were treated to an early season tarp pull.

But as gates opened at the ballpark, clouds rolled out. Skies cleared, revealing the mountain backdrop behind the lit video board in right field and scoreboard in left. And fans starving for baseball in Hill City got their wish, 600-plus days after the Hillcats last took the diamond.

The good fortune, perhaps, was a sign of things to come.

In front of 1,477 fans — considered a capacity crowd because of statewide safety mandates — the newest edition of Lynchburg’s pro team started the campaign with a 16-3 victory over the Fredericksburg Nationals.

For longtime supporters and new ones, a roster full of young talent showed it could bring the offense, exploding for 16 runs on 13 hits (including four home runs). A trio of pitchers combined for 11 strikeouts and gave up just seven hits.

The Nationals helped out by committing five errors.

Lynchburg — now the Cleveland Indians’ Low-A affiliate and a member of the minors’ new Low-A East league — didn’t take any time getting their season going in the right direction.

Julian Escobedo drew a four-pitch, leadoff walk, Johnkensy Noel singled and Micah Pries walked before the Nationals could record an out. The Hillcats got a score on a fielder’s choice, then sent another runner home on a Fredericksburg throwing error.

The 2-0 lead after the first inning ballooned to 8-0 in the second, the first of two frames in which the Hillcats scored six runs.

Those big innings came courtesy of two home runs in each.

Pries recorded the first long ball with one out and one on in the second. Johnathan Rodriguez added the next homer, a three-run shot, four batters later. Pries and Rodriguez’s hits in the frame both came on the first pitches they faced.

Alexfri Planez and Jhonkensy Noel had the other two homers in the eighth. Planez’s first hit of the night gave the Hillcats an 11-3 lead, and Noel crushed his third hit over the fence in center to up his RBI total to four.

Lynchburg’s final run came on a passed ball. In addition to the big second and eighth innings and a two-run frame to open the game, the Hillcats scored one run each in the third and sixth.

All three of Fredericksburg’s runs came in the seventh, when J.T. Arruda knocked a run-scoring, line-drive single to left and Jose Sanchez recorded an RBI on a groundout.

Daritzon Feliz threw a wild pitch immediately after entering the game with two outs in the frame to allow the Nationals’ final run to come across, cutting the lead to 10-3.

The Hillcats enjoyed an error-free night on the diamond. In the stands, the organization’s staff — dressed up as part of an Opening Day tradition —“knocked the rust off” after the extended layoff, said Chris Jones, general manager and president.

Safety measures that included social distancing and an MLB-mandated mask requirement added extra wrinkles and a different look to the return. But fans didn’t seem to mind.

The turnout rivaled that of any regular game in other seasons. Fans still lined up for ballpark favorites, still belted out “Take Me Out to the Ballgame” and still cheered when the Hillcats flexed their muscles offensively.

Young fans, like Autumn Miller, enjoyed the food and the giveaway — a baby Yoda bobblehead appropriate for “May the Fourth” — in her return to the stadium.

David Miller, donning an old-school Hillcats jersey, began sharing his enjoyment of games with Autumn, now 8 years old, when she was 3. David Miller’s Hillcats fandom started decades ago, he said.

Not having the opportunity to come to games last year, when the pandemic forced the cancellation of the entire season, “it sucked,” Miller said.

Getting to enjoy the sport again with other adults and kids who share his fandom, he said, was “fun.”

Barney Riddle, a Gladys resident who makes the trek to the stadium a few times each season, said being able to take in the diamond, was refreshing, especially following the pandemic’s significant effects on society over the past year.

And Norma Glass, another decades-long Hillcats fan, called Tuesday’s return “different.” Social distancing this year forced her and friends out of seats they’ve held for the last several decades.

But moving down a row was an acceptable price for the return.

a-struck out for Ydens in the 8th. b-flied out for Escobedo in the 6th.

CFB Playoffs: What is the new timeline for the extended playoffs?

The Lynchburg Hillcats returned to the diamond Tuesday evening for the first time since the 2019 season.

Hillcats outfielder Julian Escobedo celebrates with Micah Pries, who crosses home plate after his home run during the season opener against the Fredericksburg Nationals on Tuesday night.

Hillcats mascot Southpaw poses for a socially distanced photo with a fan during the season opener against the Fredericksburg Nationals on Tuesday night.

Fans fill the stands at the Bank of the James Stadium as the Hillcats take on the Fredericksburg Nationals during the season opener.

Hillcats pitcher Daniel Espino pitches during the season opener against the Fredericksburg Nationals on Tuesday night.