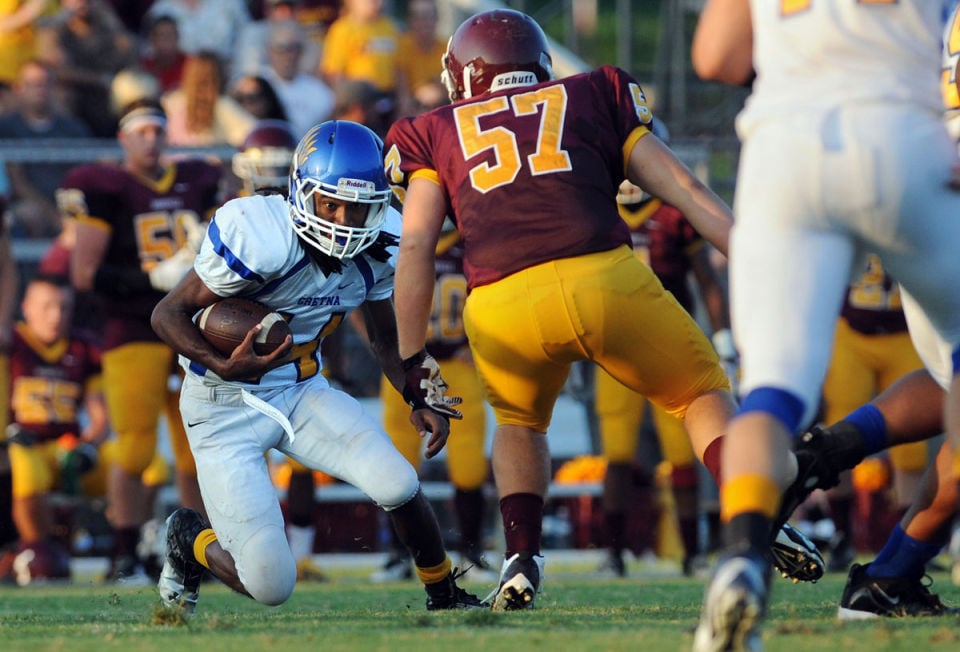 In this August 2013 file photo, Gretna quarterback Dyon Rosser (left) cuts inside Brookville defender while scrambling for yards. Rosser is one of the local stars playing in the VHSCA All-Star Games. 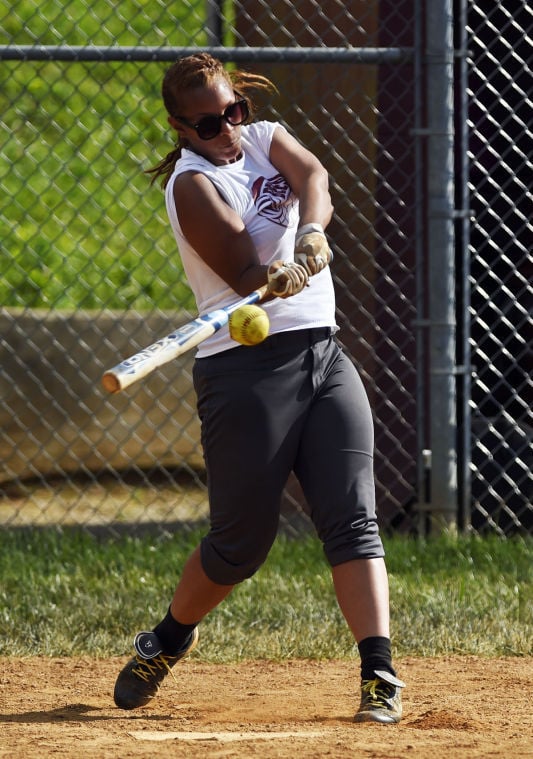 In this June file photo, Brookville shortstop Morgan Bruce practices in preparation for state semifinals. Bruce is one of the local stars playing in the VHSCA All-Star Games. 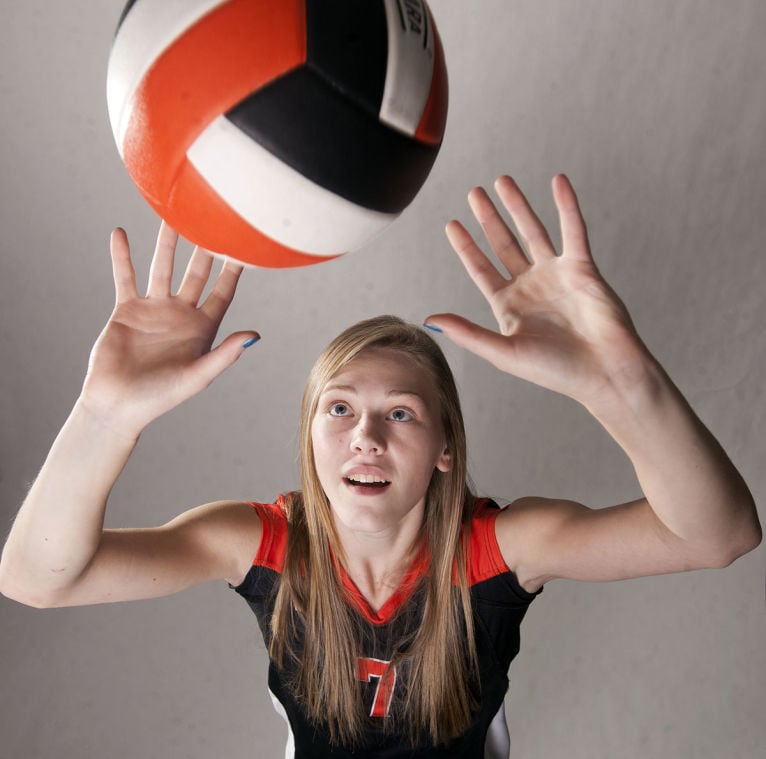 Altavista's Sydney Morris is shown in this December portrait. Morris is one of the local stars playing in the VHSCA All-Star Games.

Then the games shipped off to Hampton, home to the VHSCA.

And how could you blame the Association? After all, not many cities can compete with an almost perpetual amount of summer sun, packed beaches and a wide range of extracurricular activities.

But after a 21-year run in Hampton, the VHSCA All-Star Games, which feature more than 300 high school athletes, move back to Lynchburg this week. The Hill City will host the games and coaching clinics for three years. Liberty University will house athletes during the week, while also providing venues for boys and girls soccer, baseball, softball and the week’s main event, football.

Lynchburg College serves as host site for the boys and girls basketball games, which kick off the festivities Monday.

“We’re very excited and we hope that, with the move, attendance will go up,” said

Altavista boys basketball coach Mike Cartolaro, who serves on the VHSCA executive and legislative committees. “Certainly for the games, it adds a great week of high school entertainment that hasn’t been here for quite sometime.”

Cartolaro will be one of several area coaches on the sidelines this week. Altavista football coach Mike Scharnus will command the West football team, while Colonels basketball and volleyball coach Debra Spencer will lead East teams in both sports.

Three years ago, Cartolaro began a quest to get the games moved to Lynchburg. He approached administrators at Liberty University, to see if the school would be willing to serve as host. Liberty, he added, was very receptive to the idea.

“Obviously, we had to go into great detail and meet a few times,” Cartolaro said. “That got the ball rolling.”

Lynchburg hosted the VHSCA all-star week from 1985 to 1992. The city made a serious bid for the games in 2012, with representatives from discoverLynchburg and Liberty University presenting a plan to the VHSCA’s executive committee.

Every three years, the VHSCA votes on whether or not to move the events. Cartolaro said the change is a joint collaboration with LU, LC and the City of Lynchburg.

The efforts led to an announcement last summer at E.C. Glass High School, after Lynchburg won the VHSCA vote.

“[Hampton] was a long drive for coaches from the southwest, and it’s a long drive for athletes and fans who want to come watch,” said Spencer, who noted the games were in Lynchburg when she first came back to coach in the area in the early ’90s. “This area is more centrally located for all the schools. … Liberty’s facilities are next to none. It’s going to be a good change, and hopefully, it will increase the number of coaches attending the clinics.”

Besides renewing ties with Lynchburg, the games and clinics take on further historical significance this year. They’re unfolding after the inaugural season of the Virginia High School League’s postseason alignment — which placed teams in a new conference and region format — and will take place roughly one week after the VHSL announced a proposal to move up to 77 teams into different conferences, beginning in 2015-16. In addition, three new schools in Virginia will begin operation at that time.

It’s a massive move that could further affect not only schools’ travel schedules — in some cases, teams would travel longer distances to compete in the postseason — but has left coaches and athletic directors skeptical of once again facing new opponents.

In the new system, districts have all but died, since district standings no longer have any bearing on postseason play. Coaches and ADs have weighed in on the system in the past year and it seems as if everyone has an opinion. The subject is certain to arise this week as coaches gather together.

“The importance of the old district teams is being de-emphasized because it doesn’t matter,” Cartolaro said last week. “What matters is conference play.”

The arrangement, in which every team across the state reaches the playoffs, has also, by default, worked to devalue the regular season. While he agrees with what the VHSL currently is trying to do, Amherst coach Joey Crawford told The News & Advance he believes the regular season should have some sort of bearing on the postseason.

“I’d like to see the regular season mean a little bit more, kind of like it does in football,” Crawford said, “where you’re playing with a points system of sorts and try to establish who is in and who is out.”

The VHSL and the VHSCA are separate entities, with the former acting as the governing body for high school sports throughout the state. The VHSCA, which has 9,500 members according to its website, began in the late 1940s. Today, its annual summer clinic offers coaches the opportunity to network and learn more about their professions.

In order to compete in the all-star games, players must be graduated seniors who have been nominated by their coaches. At the end of each season, coaches within the association meet to select individuals.

Heritage guard Cameron Carter will face off against Altavista forward Kalia Donigan in the girls basketball game. There are no local boys basketball players, but the highest profile player will be Floyd County’s Caleb Tanner, who became the VHSL’s all-time leading scorer last season.

Liberty forward Laura Garbarini and JF forward Cassidy Ratliff also will play together on the girls side. Garbarini became the Minnettes’ all-time leading scorer this spring while Ratliff took over as JF’s all-time points leader in goals and assists combined.

A full clinics schedule, along with speakers for each session, is available at vhscainc.com.

“We have a wave of younger coaches, and we want to attract them,” Cartolaro said. “Come listen to our speakers. Watch a game or two.”

» The VHSCA All-Star Games are back in Lynchburg for the first time since 1992, after an 11-year stint in Hampton. The games have been played in several Virginia cities over the years, with the first all-star clinic in Salem in the 1940s.

Where are the local stars from?

» Campbell County had the most local all-stars at 9. Hundreds of high school players from around the state are coming to Lynchburg to participate on 14 teams.

Basketball tips off at Lynchburg College

The signs slowly began to show as the first minute or so ticked off the clock in the fourth quarter. The fluid ball movement and frantic, but …

Jordan Gose scored 15 of her 21 points in the second half to lead the West squad over the East, 77-74, in the Virginia High School Coaches Ass…

In this August 2013 file photo, Gretna quarterback Dyon Rosser (left) cuts inside Brookville defender while scrambling for yards. Rosser is one of the local stars playing in the VHSCA All-Star Games.

In this June file photo, Brookville shortstop Morgan Bruce practices in preparation for state semifinals. Bruce is one of the local stars playing in the VHSCA All-Star Games.

Altavista's Sydney Morris is shown in this December portrait. Morris is one of the local stars playing in the VHSCA All-Star Games.