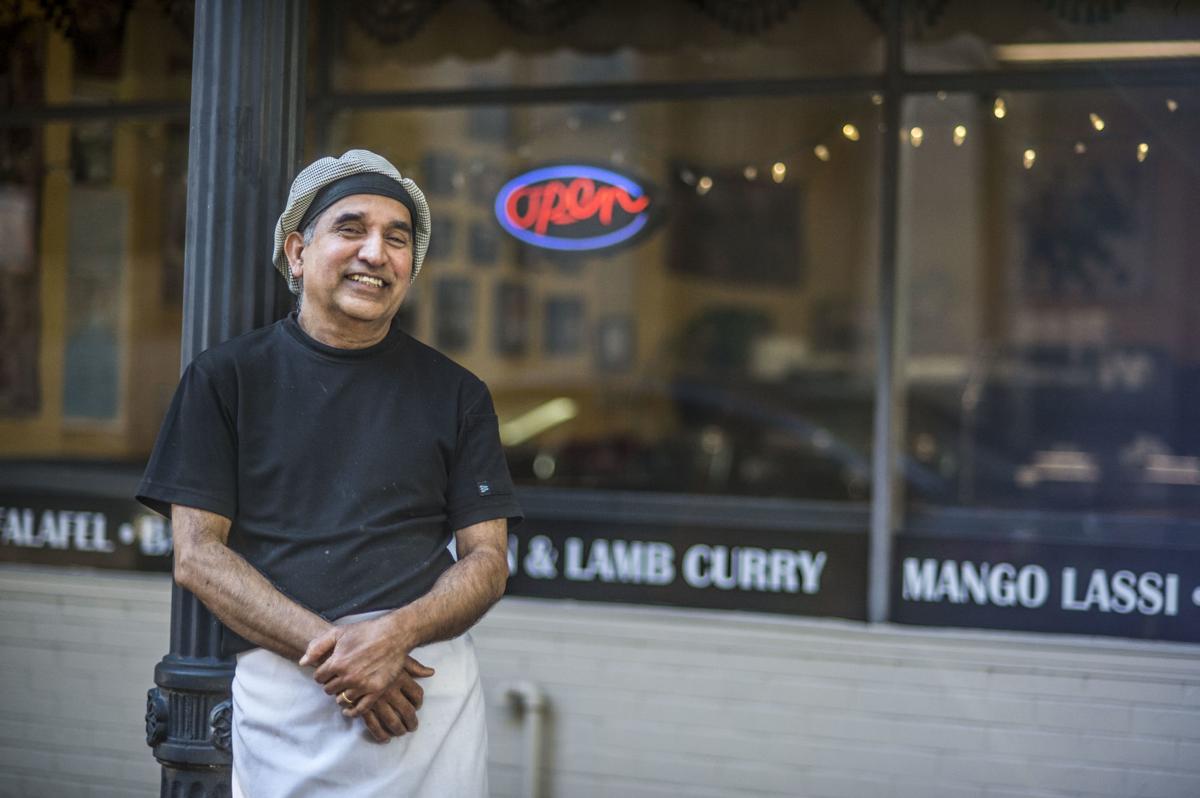 Uday Mukherjee poses for a portrait at his restaurant Hot & Cold Cafe on Thursday, Nov. 16. 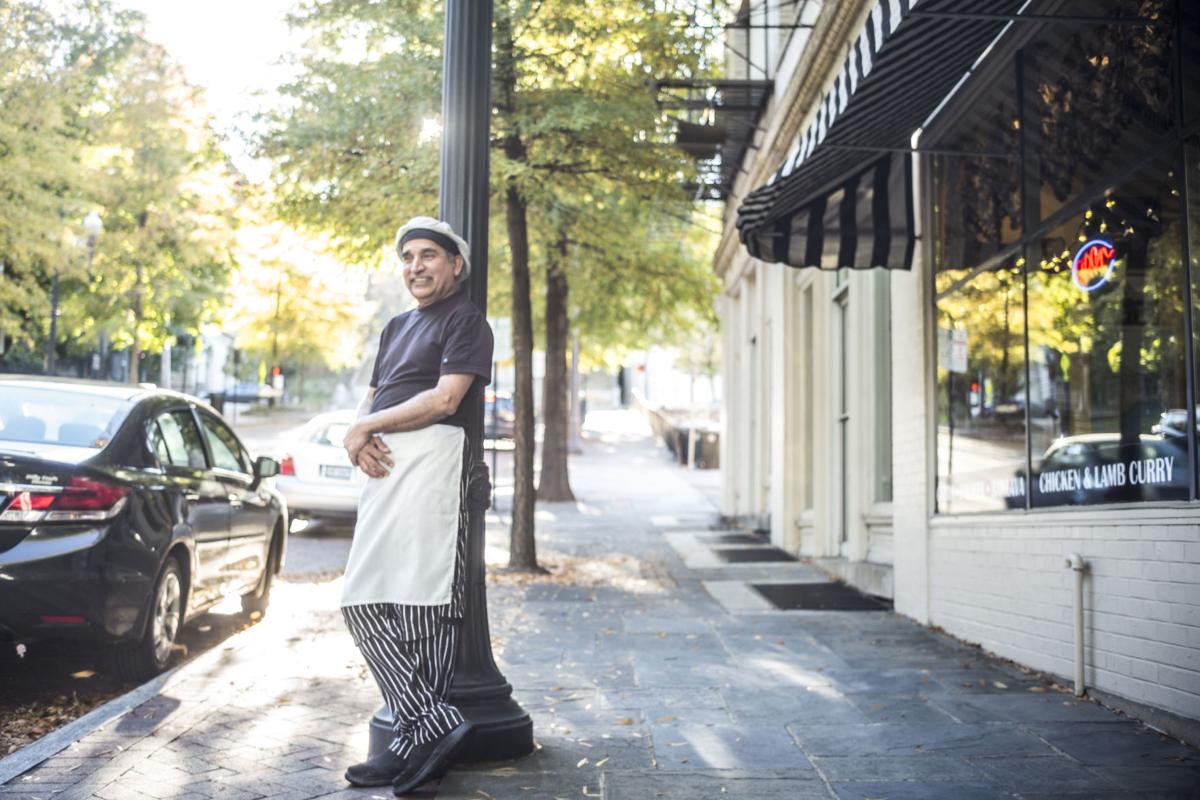 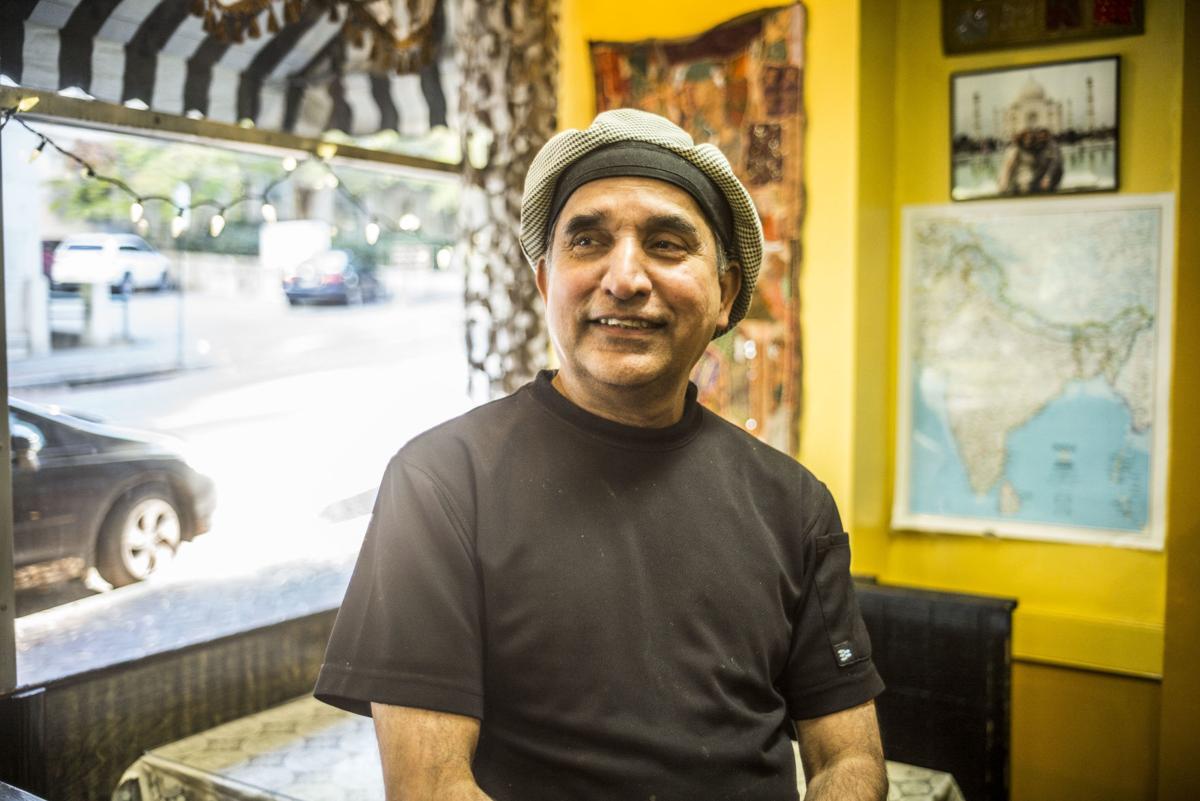 Editor’s note: This is part of an occasional series profiling local chefs. Know someone who should be featured here? Email eschkloven@newsadvance.com with any recommendations.

When the doors of Hot & Cold Café are open, chef and owner Uday Mukherjee does not stop moving. He darts around the small restaurant taking orders, filling water glasses, cooking meals and ringing up patrons on the register.

He certainly never stays still for an interview. Especially when the subject at hand is him.

“I can work good, I cannot talk good like that,” he says simply as he sits down for the first time. “My wife, she can talk later. No problem.”

Like in the U.S., where Southern biscuits and gravy taste nothing like freshly made New England clam chowder or sunny So-Cal fish tacos, Indian cuisine varies from the Northern region to the South and East.

Raised in the Hooghly district of West Bengal, around 50 miles from Kolkata, Mukherjee grew up with Indian cuisine that was on the sweeter side.

“The sweets are super sweet, but the food is just little touches of sweet here,” says Mukherjee’s wife, Timby, who serves as the second set of hands at Hot & Cold. “But … his area is known for the best sweets of India.”

The food Mukherjee cooks at Hot & Cold, however, is not rooted in the region of his childhood, instead bridging the Southern and Eastern styles while leaning toward the spicier food of Northern Indian cuisine.

This fusion was deeply influenced by Mukherjee’s career in catering management while working in Hyderabad, the capital of Telangana in the southern region, where he lived for more than 20 years.

Mukherjee says he worked with chefs from all over India to satisfy the type of food needed at each catering event. As the middle man between the chefs and customers, he learned about what ingredients and cooking utensils were needed to cook different styles of Indian cuisine.

“There, I got my experience,” he says. “I was with so many chefs in different cultures.”

In 2000, he moved to the U.S. on a company sponsorship and worked in the New York jewelry business, a career shift that he says did not fit with his previous work nor his degree in banking management.

He returned to working in restaurants after a year, taking jobs in Connecticut and New Jersey before moving to Lynchburg after receiving an offer from the original owners of Milan Indian Cuisine on Wards Road.

“[I] met my wife here,” he says. “Virginia is for lovers. I say [it] like that way cause that is the way everything changed.”

Mukherjee left Milan after almost two years and in 2007, he took over the space on Ninth Street from its previous owner, who wanted to retire, Timby says.

At the time, the location operated as Ninth Street Subs & Mediterranean Deli and Mukherjee trained with the restaurant’s previous owner in Mediterranean-style cooking for a month before converting it to what it is today.

“The reason we kept the Lebanese is that there were no Mediterranean restaurants in town other than Italian,” Timby adds.

Until that time, Mukherjee says, he’d never heard of baklava, baba ganoush or falafel. He got the basic idea for these goods, he says, from the previous owner. The rest was researching dishes from his house.

“This is my first venture,” he says of the café. “I handle the kitchen directly. I cook everything. So [it is] the shape of my experience and everything I know. That’s why this is like an R&D lab. I research everything.”

Especially the buffet, he says, which often includes new experiments not found on the regular Hot & Cold menu.

A decade after it opened, Mukherjee’s little café is known for its Indian-Mediterranean fusion menu in the Lynchburg food scene.

Getting to know him

Mukherjee took a break from his one-man cooking operation to answer some palate cleanser questions:

“When I learned [to make] kheer [Indian rice pudding flavored with almonds, cashews and raisins]. I learned from my mother. Still, I maintain that recipe [gesturing to the menu]. That is the thing that I still memorize like that. That is the best dessert for me actually, my wife always says that. … [My mom] is in heaven, but I still follow [her recipe]. Her blessing is there.”

The one meal he would want to cook for the rest of his life (if he had to pick):

“Dahl Makhni. It is a special lentil dish. It is a combination of four lentils mixed with kidney beans. And it has to cook in [the] proper process. It has to have the broil and after that add onion, ginger, butter, a little like that. Makkhan [means] butter. … This is a very popular dish, and [a] hot dish. People love that. And dessert. My rice pudding is my favorite.”

His motto in the kitchen:

“If you want to run your kitchen process fast, everything should be organized properly. That is the main thing. All the spices and where is right hand, left hand — everything is there. I know what is there so if I’m cooking, [my] left hand [is] taking something, my right hand [is] taking something. That’s because in Indian cooking, proportion and perfection, those two things, the taste comes from there.”

In the basement of her home overlooking the James River, Stephanie Fees carries a large, clear plastic container filled with radiatori noodles.

Some chefs gravitate toward the grill. Others find their niche in elaborate plating. Iron & Ale’s executive chef Jeffrey Eames? He’s a sauce guy.

During a warm Wednesday afternoon in May, Jonathan Gonzalez rolls up to his house in an old Ford F-150, climbs out of the cab and plucks a cardboard box of 10 whole chickens from the truck bed. Earlier, a supplier had dropped off an order of top round steak and beef tongue, says the chef who owns and operates popular food trucks Uprooted and Calle (pronounced Ca-yey) Cruz Miami with his wife, Jessica, and tomorrow, he will meet with farmers to pick up his greens and vegetables.

While other children were pretending to be princesses, astronauts and pirates, Adi McCauley played chef. She would give her family menus, head to the kitchen and actually whip together their orders.

The patches on Edwin Scholly’s chef coats act as a sort of culinary roadmap to his decades in the kitchen. Some represent professional affiliations while others mark periods teaching at different institutions. But the most interesting patch appears in various places on different jackets: the seal of the U.S. Department of the Navy.

With plans moving forward for New-York style luxury apartments inside the Krise Building on Main Street, Hot & Cold Café is preparing for …

“He’s probably the hardest working man in show business,” says Scott Cardwell, former owner of beloved bar-restaurant Bull Branch. “He has his hand in catering and special events. He just does everything, and it’s really impressive.”

Chef series: The Water Dog's Liz Ruberg has a hunger for the restaurant biz

Editor’s note: This is the first in a new, occasional series profiling local chefs. Know someone who should be featured here? Email eschkloven…

Uday Mukherjee poses for a portrait at his restaurant Hot & Cold Cafe on Thursday, Nov. 16.