Q: Is there snow and ice on other planets?

A: Like Earth, the north and south poles of Mars have ice caps that grow and shrink with Mars’ seasons.

Mars’ ice caps are made mainly of water ice, although Mars is cold enough to also have frozen carbon dioxide, or dry ice.

Carbon dioxide is in the Martian atmosphere, and it freezes and falls to the surface of the planet as dry ice snow.

The Mars Reconnaissance Orbiter, or MRO, has observed pools of seemingly pure ice at the bottom of small meteorite craters. Radar observations of Mars have indicated that deposits of ice are buried below the surface.

The MRO has detected layers of ice in exposed cliffs poleward of 55 degrees north and south.

The banding structure in the cliffs suggests the deposits built up over many seasons and may provide clues to Mars’ past climate.

The Lunar Reconnaissance Orbiter has detected water ice in shadowy craters near the north and south poles of Earth’s moon. Enceladus, one of Saturn’s moons, has an icy surface and is the brightest moon in our solar system.

Below its icy surface is a heated ocean. Geysers shoot water from below out into space. The water freezes and falls back to the surface as snow.

Saturn’s smallest moon, Mimas, is a ball of almost pure water ice about 123 miles across.

Neptune’s largest moon, Triton, has geysers like Enceladus. These geysers are made up of nitrogen rather than water. This nitrogen freezes, covering Triton with ice made of frozen nitrogen.

Io, one of the many moons orbiting Jupiter, has “snowflakes” made out of sulfur.

"Weather Guys" Steve Ackerman and Jonathan Martin are professors in the University of Wisconsin-Madison department of atmospheric and oceanic sciences.

Why the lack of snow so far this winter

Storm track is everything, but there are signs of change for snow lovers

Still looking for our first accumulating snow | Snow Search for week of Jan. 30

We're half way through winter and many from New Jersey to North Carolina are still looking for their first accumulating snow of the season. Joe and Sean look to next week for wintry hope. However, we'll likely have to keep searching for snow.

Cool temperatures will blanket the Lynchburg area Monday. It looks to reach a crisp 48 degrees. We'll see a low temperature of 29 degrees toda…

Lynchburg residents should expect temperatures in the 40s. The forecast calls for it to be a nippy 41 degrees. 37 degrees is today's low. The …

Defining the 'sun dog' and how they appear in the sky, even at night

Sun dogs are best seen when the sun is at or near the horizon. Here's what they are and how they appear.

This evening in Lynchburg: Clear skies with a few passing clouds. Low around 30F. Winds WNW at 5 to 10 mph. Tomorrow's highs will be in the 50… 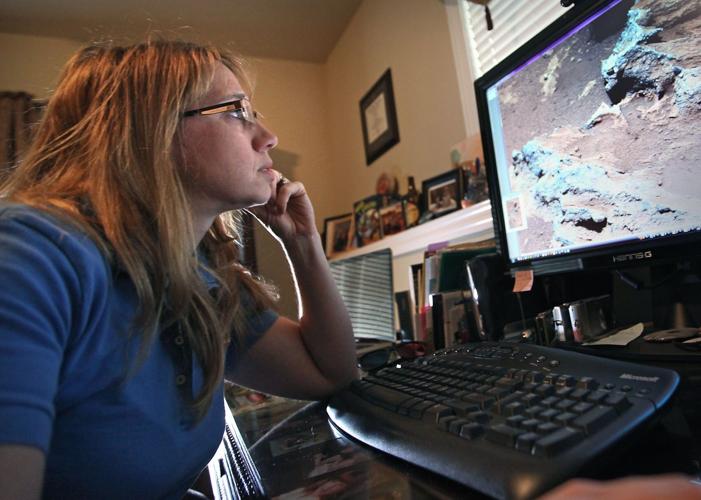 Becky Williams, science researcher with the Mars rover Curiosity project, examines imagery captured on the surface of the planet on a computer screen in the work office of her Waunakee, Wis., home. The researcher was the lead author of an article in the journal Science regarding the team's discovery of water evidence on the planet in 2013. 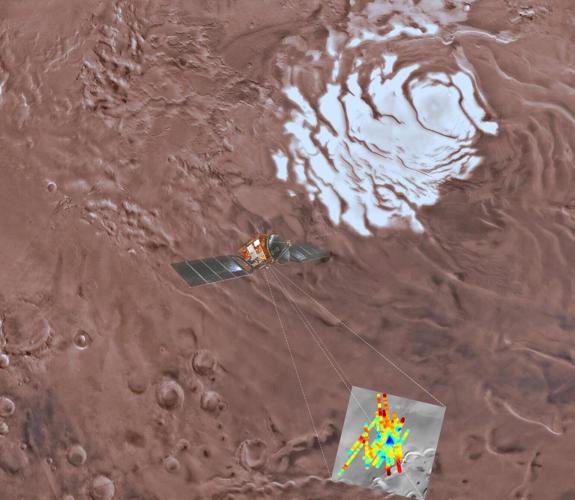 This image shows an artist's rendering of the Mars Express spacecraft probing the southern hemisphere of Mars. At upper right is the planet's southern ice cap. The inset image at lower right shows the area where radar readings were made. The blue triangle indicates an area of very high reflectivity, interpreted as being caused by the presence of a reservoir of water, about a mile below the surface.