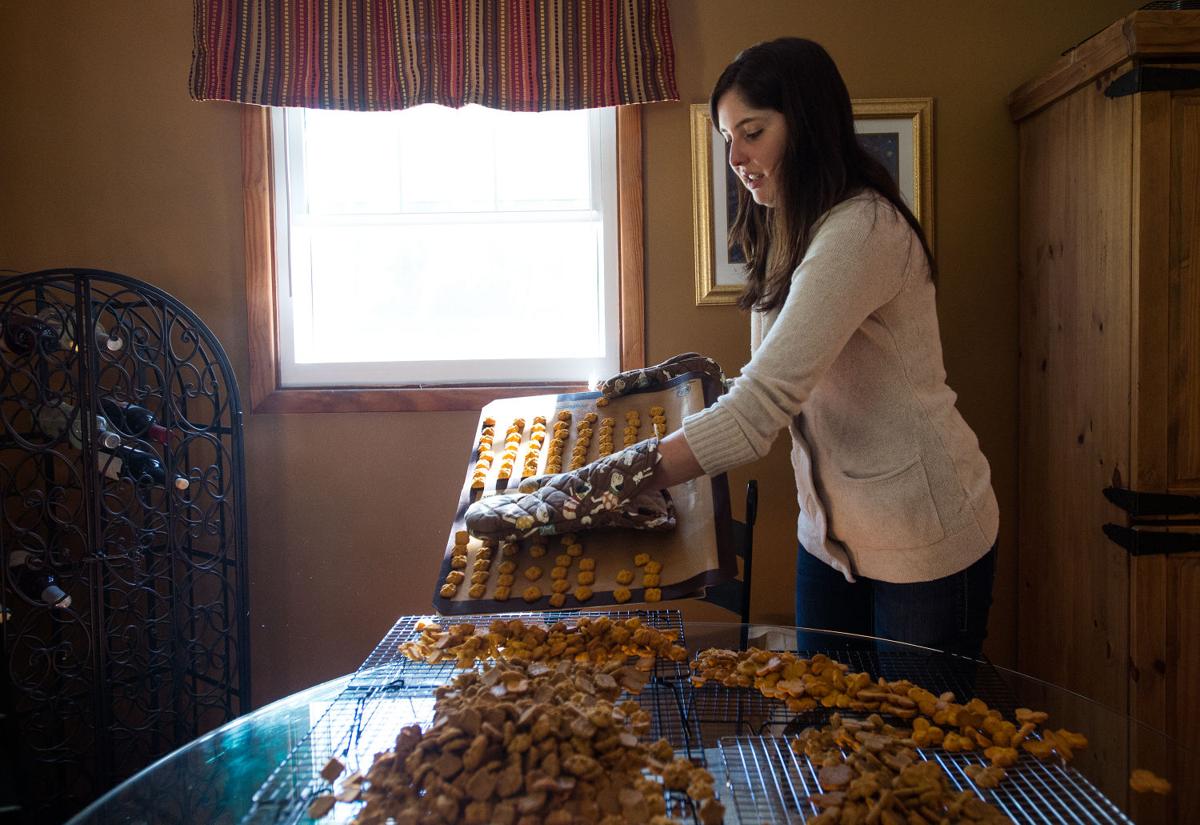 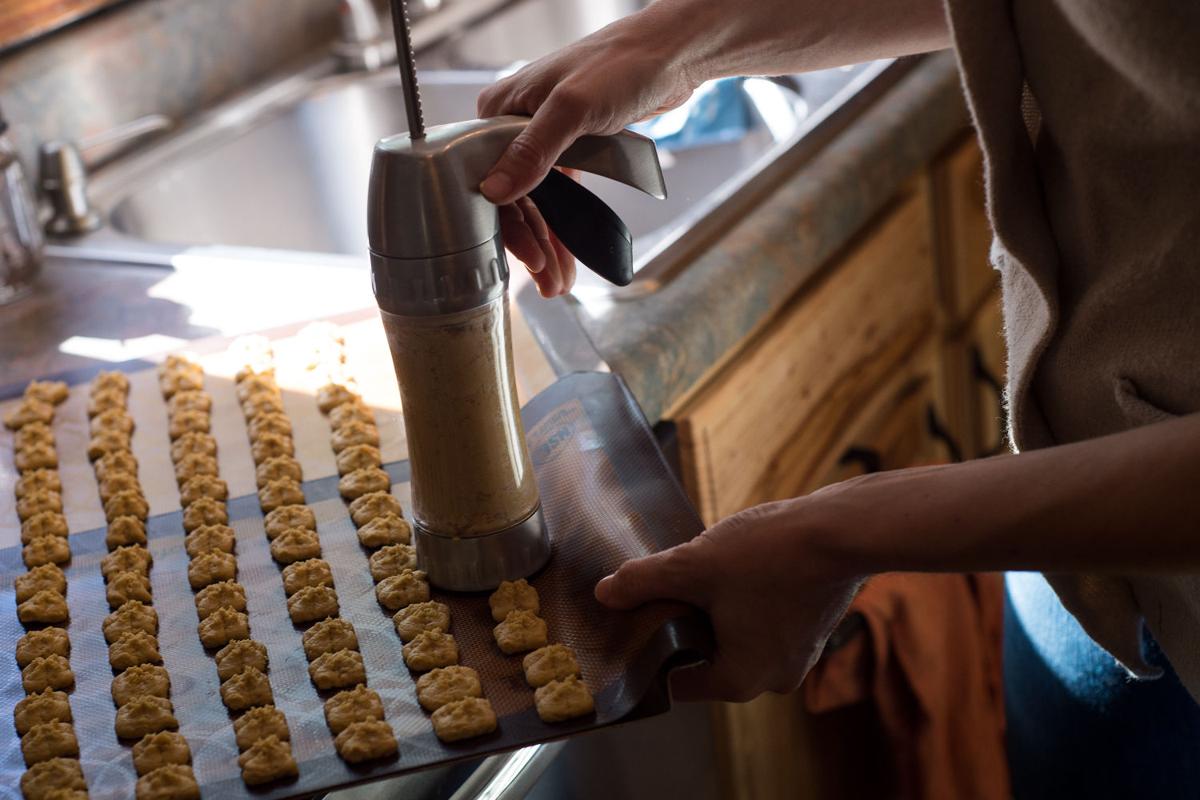 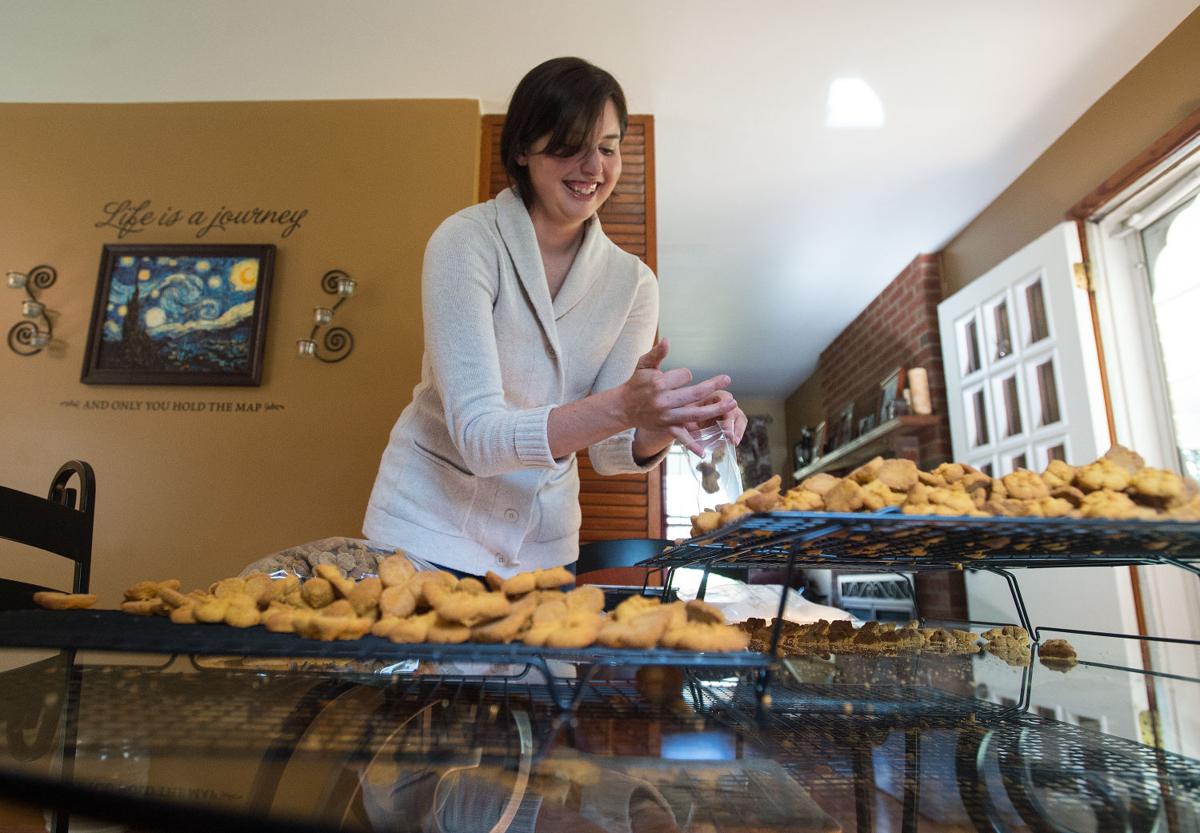 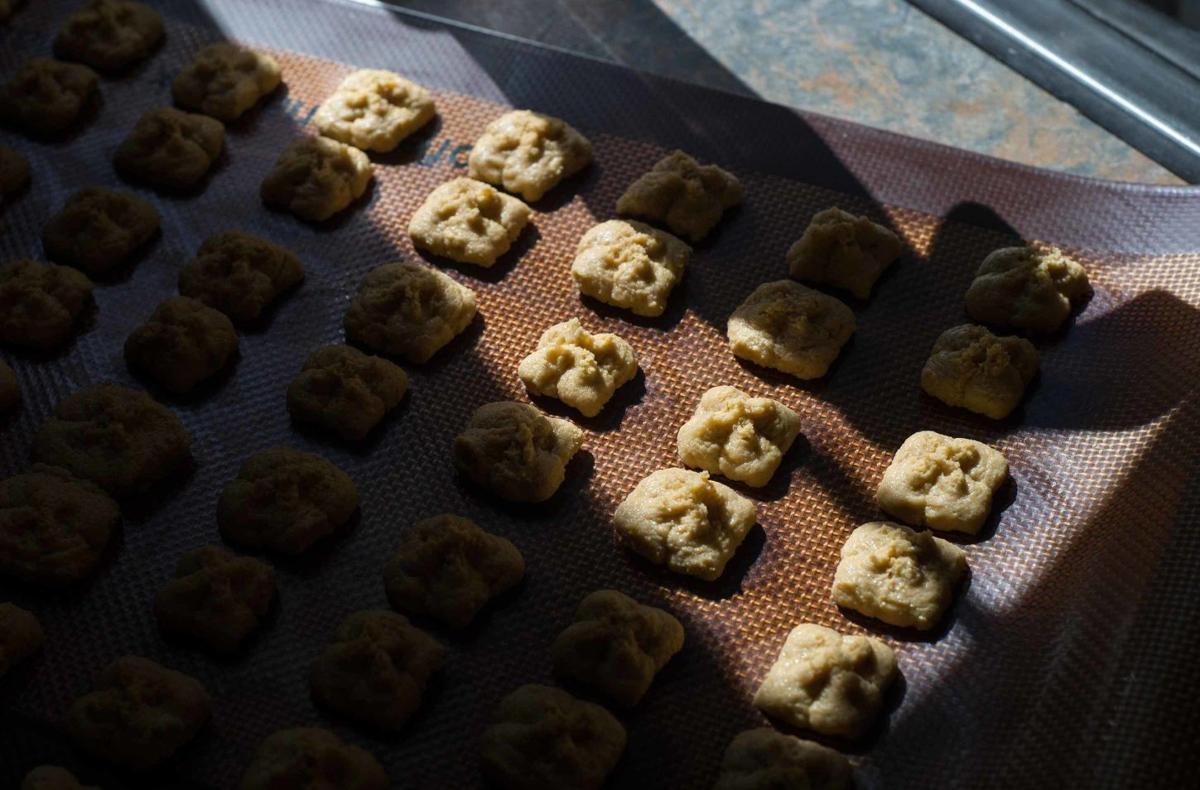 “Because when he was little, his legs were just these little nubs that came out of his sausage body, and my husband said, ‘they look like little tater tots,’” recalled Borneman as she moved around the Barkery, otherwise known as the kitchen in her Campbell County home, checking the timer on the oven currently baking her tiny dog biscuits.

Tank and his adopted sister, Tilly, cut the conversation short as they charge around the small kitchen, barking enthusiastically.

The two stocky bassadors love attention, and thanks to Borneman’s growing company Tanker Tots Natural Dog Treats, they have been receiving a lot of it.

With 12 locations in Central Virginia, including seven in Lynchburg, regular appearances at two local farmers markets, and an online store, Borneman’s brand has begun to build a healthy following.

Tanker Tots, which won Virginia’s finest in 2014, grew out of Borneman’s love of her dog.

A year after Tank’s adoption, the couple noticed he was showing signs of digestive distress. They found a healthy, millet-based food for the puppy to eat that would better suit his sensitive stomach, but treats were a different story.

“Everything that you buy at PetSmart, Petco, Walmart — places like that — those treats are not only nutritionally unbalanced, but they also sit on the shelf a while so the preservatives are there that keep them ‘fresh,’” said vet-tech Christopher Reynolds who works at WellPet Group in Forest, one of the Lynchburg locations that sells Tanker Tots.

Before moving to the Hill City, Borneman was a partial owner and general manager of a pet store. She decided to use her knowledge of the pet industry to create a treat that was both healthy and affordable.

Borneman spent two years formulating a recipe after which she began to sell the treats locally at the Bedford Farmer’s Market in 2011. With the help of her husband, she continued to fine-tune it and naturally increase the shelf life, which, at present, is six months.

Slowly, Borneman has begun to add more products to their line, including nose and paw wax, chicken jerky and beer bits, which debuted at the Lynchburg Beer and Wine Festival.

“The beer bits are made with craft brewer’s grain,” she said. “Apocalypse Ale was awesome enough to give me a five gallon bucket of spent grain. It’s malted barley. … It was a win-win, they get to stock the dog treats with their beer grains and they get some place for those [grains] to basically be upcycled.”

Tanker Tots uses human-grade ingredients only, as industry standards differ greatly from human to pet food and Borneman said she wants her four-legged friends to eat only the best.

While the some ingredients change depending on the flavor, every Tanker Tot treat uses millet, sweet potato and vitamin E.

“The fact that I can say to my clients they’re so all natural that you yourself can eat them if you run out of food, that gives you a lot of peace of mind,” said Lindsey Bender who carries Tanker Tots products at Canine Cuts, her pet grooming salon on Wards Road.

Borneman cares so greatly about the quality of her product she grinds her own millet flour, makes her own peanut butter from scratch and drives to North Carolina every few months to pick up 400 pounds of sweet potato for the batter.

“It tells me that she’s put a lot of time and effort into making sure that what she’s selling is nutritionally healthy and well balanced,” said Reynolds, who feeds Tanker Tots to his three dogs. “That it’s not just a treat, but something that’s good for the animal as well. I know what's in it. The freshness is there.”

On top of a careful choice of ingredients, Borneman went the extra step of registering her product, including each flavor, with the state of Virginia.

This complicated process involves getting her feed license from the Department of Agriculture, sending the product for lab testing and then registering her labels and test analysis with the state.

The entire process from development to receiving documented approval can take anywhere from six to 10 months, which sometimes bring Borneman’s new product rollout to a standstill.

Despite the amount of time it takes, Borneman knows the registration adds an extra level of professionalism to her products.

“It means a lot to us because any person can throw some ingredients in a bowl and say, ‘Look, I made a treat.’ I could do that myself,” Bender said. “The fact that I know these are certified safe, the ingredients are safe, the process is safe, that gives you a lot of peace of mind too because my clients trust me to give them the best product possible.”

Borneman fills about 400 bags of treats per week on average with that number sometimes increasing to 500 or 600 during busy seasons.

“This past year was the first time where the business was doing … enough volume of selling treats that this is my full-time job now,” she said. “I’m baking four to five times a week, delivering one to two days.”

For Borneman, the next step is increasing the scale and efficiency of production. She has added a new oven, bringing her total up to three. She plans to relocated the operation to her outdoor shed and add a multi-shelf commercial oven by spring.

This expansion to the shed would allow her make four times as many treats in a half hour, Borneman said, and she predicts by next year, they will have doubled in volume as they will be ordering millet by the pallet.

“We’re working on a cat treat too,” she said. “We have three flavors, but cats are picky. Every time about 50 percent of the cats will eat them and 50 percent won’t. It changes every time in terms of which cat will eat them. I’m trying to get up to about 70 or 80 percent like them before I launch the treat.”

Eventually, Borneman said she wants to sell in major retail stores like PetSmart and Petco while maintaining the quality control.

Until then, Borneman will continue to make dogs’ tails wag one bag of Tanker Tots at a time.

“What better thing to do everyday than talk to people about their dogs?” she said. “Making the biscuits is a lot of work, but … when I get to go to these events and see pictures on phones, and hear all their quirks and fun stories, it’s worth it.”

Something Else Boutique, a clothing boutique located in Bedford, will open a new location Nov. 1 at River Ridge mall.

A Lynchburg woman has started her own charcuterie-focused delivery business.

A new specialty and homemade goods store is set to open Friday in the Boonsboro Shopping Center.

A New York-style bagel and breakfast grab-and-go eatery will open near downtown Lynchburg by the end of the month.

A new boutique DIY studio that offers hands-on classes is opening in the Wyndhurst area soon.

The following items, all under $15, can help make distance learning more appealing to even the youngest learners.