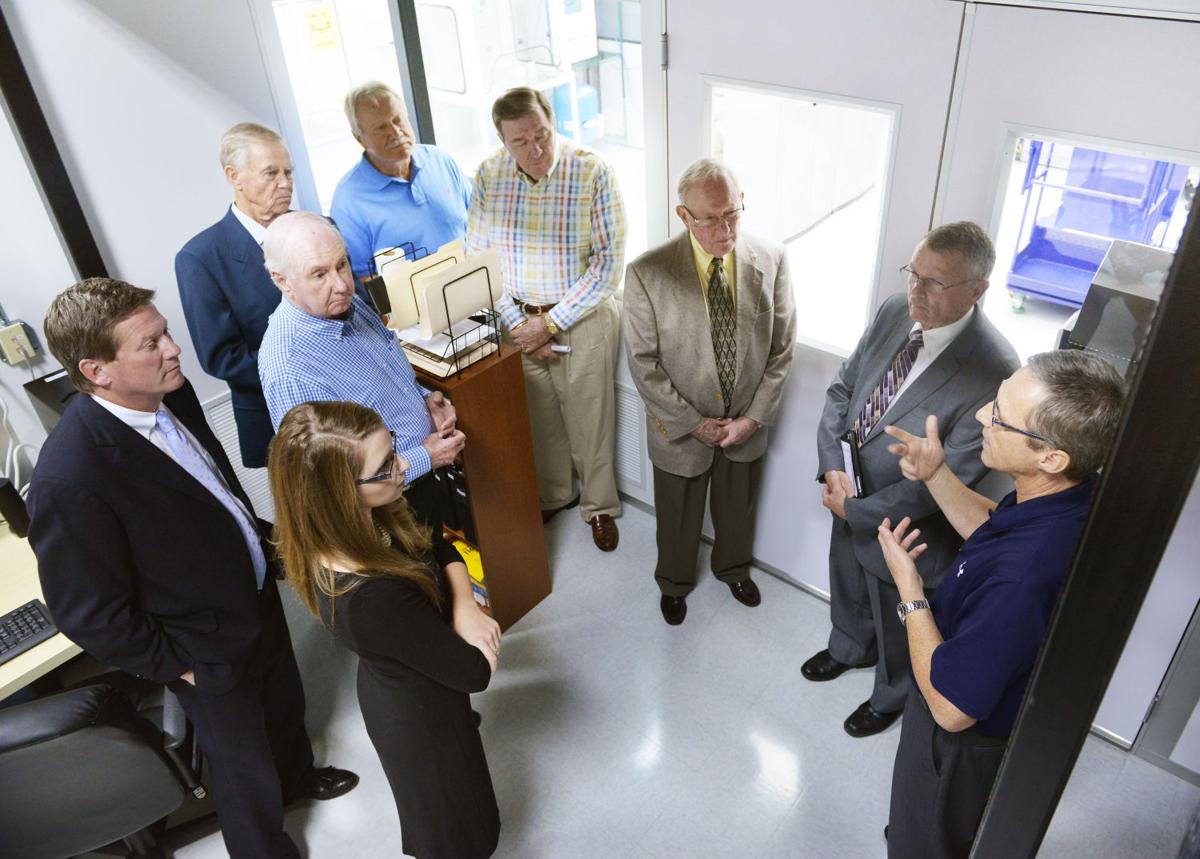 Owner Dr. Francois Chenard gives the Danville Development Council a tour of IRFlex corp at a tour of The Dan River Business Development Center on Sept. 30. 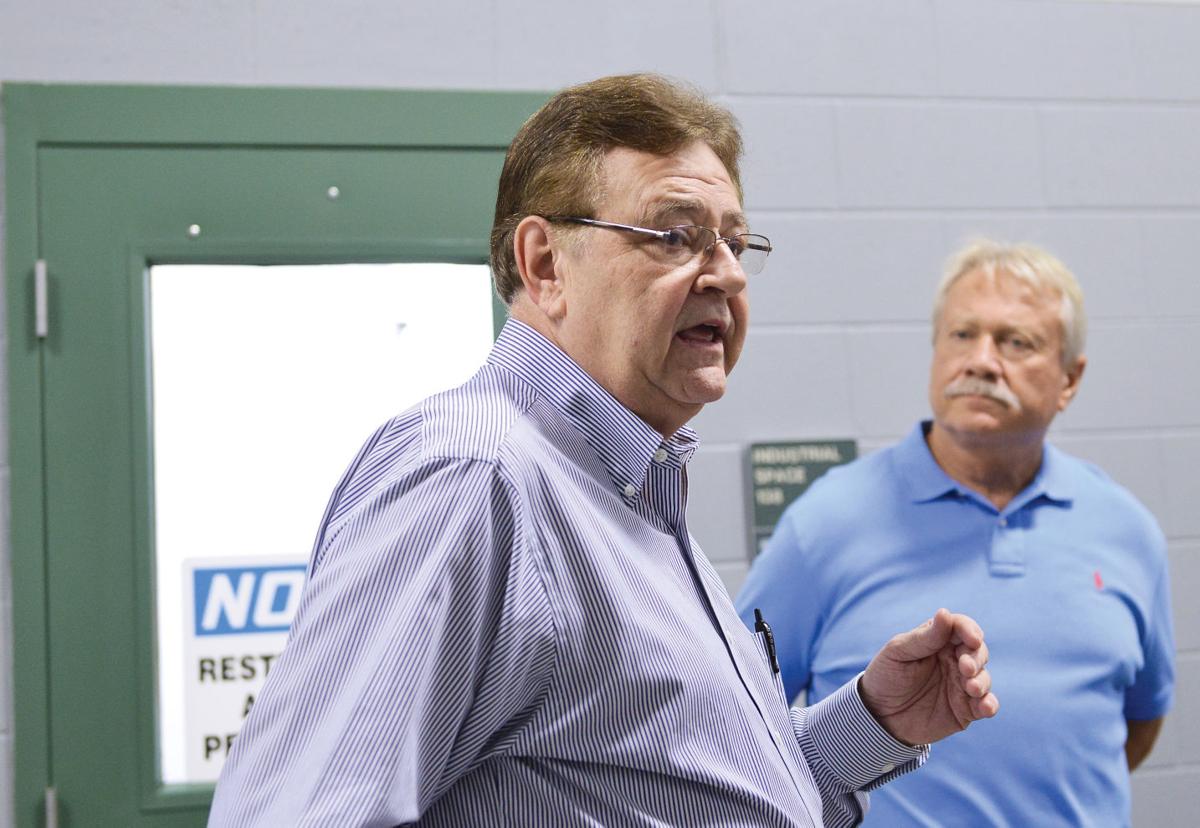 Dan River Business Development Center Ralph Hogg talks with the Danville Development Council during a tour of the facility on Sept. 30.

The business incubator, which opened in April of 2001 as a joint venture between Pittsylvania County and Danville, was the focus of the day’s meeting. Dan River Business Development Center Director of Operations Ralph Hogg gave an overview of the center and its history.

“Through federal and state funding, the building was constructed,” he stated. “The original design was to try to have industrial and as well as office space. We found out we probably needed more industrial space than office space.”

The incubator has been a temporary home to multiple business and industries. Currently it houses Tyton Bioenergy Systems, Engineered Biopharmaceuticals and IRFlex Corporation.

“This has provided a lot of opportunity for the citizens of our area,” he said. Roughly 2,000 jobs have been created since 2001 by companies aided by the incubator.

This growth is in part due to flexibility, Hogg explained. Having housed everything from a call center to large or advanced scientific companies, the center has evolved its understanding of company needs.

“We have been working with small companies, entrepreneurs that are just opening an office for themselves all the way up to Swedwood, which is now referred to as Ikea, that hires several hundred people. So we’ve had all different ranges,” he said.

Hogg emphasized that the center is one part in a long chain of efforts by the city, economic development and other parties. Realizing it doesn’t need to compete for business leads has helped all represented interests, he said.

The abbreviated tour by Hogg presented the labs of Tyton and IRFlex. EBio has recently begun testing involving blood samples and thus could not accept visitors into the lab.

“Tyton has developed a special kind of energy tobacco plant that can be turned into biofuels,” he told the board. “Tobacco, traditional tobacco, has sugar and oil in the plant, but we’ve modified it to amplify sugar and oil production. The sugar turns into ethanol and the sugar gets turned into fuel.”

Being a historically tobacco farming region, members asked if Danville’s tobacco was used in the studies. Hartman replied that “tobacco is the most widely grown commercial, non-food crop in the world. It grows in 125 countries commercially. We grew it in South Dakota. It grows fantastic in South Dakota. We don’t know what it tastes like. I’m sure it’s nothing like the great flavor that comes out of the Danville region. But we’re growing it for biomass and sugar and oil content. It gives us incredible flexibility.”

The company utilizes the entire plant, utilizing the sugar- and oil-rich leaves and stalk with two cuttings off each plant every year. The entire plant is processed without curing and in a mechanized fashion, lowering prices incurred during smoking tobacco preparation.

“We make fiber-optics. We have all the equipment to make specialty fibers for special applications,” Chenard said.

Chenard instructed the board to peak into the climate controlled facilities that are kept extremely clean with little to no dust or dirt.

The highly maintained facilities are necessary to handle such unique and technologically advanced materials. “It’s the only fiber that transmits mid-infrared lasers,” Chenard said.

The board also heard from Economic Development Director Telly Tucker. He shared multiple recent events, including:

» The closing of Attic Hound.

Tucker also mentioned that Noblis is conducting aggressive recruitment to find 12 new employees. The Northern Virginia executive team has visited and met with the economic development department to strategize on the most efficient means to accomplish the company’s goals under the Tobacco Commission agreement.

The Research Building of Dan River was reviewed by Tucker, too. He mentioned that the delayed New Market Tax Credits have finally been granted. Pemberton Lofts has begun its phase two construction, which already stands at 50 percent occupied under pre-lease agreements. He commented that this demonstrated a demand for housing in the River District. Pemberton Lofts officials plan to proceed with the 610 Craghead St. Continental Building by May or June 2015.

The Lynchburg-based parent company of Bank of the James on Friday reported a second-quarter profit that more than doubled year over year.

5 mortgage trends to watch for the rest of 2021

Here are housing trends to watch for in the final months of the year. Also, check out more of the week's best money reads from the experts.

Smithfield Foods will stop slaughtering pigs in its hometown of Smithfield

Smithfield Foods says it will no longer slaughter animals in the Virginia town where it was founded.

Tourists are returning to Virginia Beach, but hotels are struggling to rebound from pandemic

This summer is shaping up to be a much better season for Virginia Beach hoteliers, who are still digging out of the COVID-19 trench. The tide started to turn in May. “Memorial Day weekend was one of the best weekends the area has had in a long time,” said John Zirkle, president of the Virginia Beach Hotel Association. “It was hopping.” But it’s going to take a long time for the numbers to ...

Here's what millennials are teaching their kids about money

After experiencing two global crises — a recession and a pandemic — on the road to adulthood, here are the money lessons five millennial parents around the country want their children to learn.

The owners of Lynchburg's La Carreta restaurants will open a new eatery at River Ridge mall in spring 2022.

Lynchburg's Burlington store to relocate 3 miles down the road

Burlington will relocate this fall farther down Wards Road near Old Navy and Kohl's.

How to Boost Your Retirement When Social Security Only Covers 40%

Here's how to eke out more income for your senior years, since Social Security will only go so far.

Find out what's going on and why it's happening.

3 Investing Myths That Cost Me Thousands of Dollars

Don't let these misconceptions keep you from making millions.

Owner Dr. Francois Chenard gives the Danville Development Council a tour of IRFlex corp at a tour of The Dan River Business Development Center on Sept. 30.

Dan River Business Development Center Ralph Hogg talks with the Danville Development Council during a tour of the facility on Sept. 30.