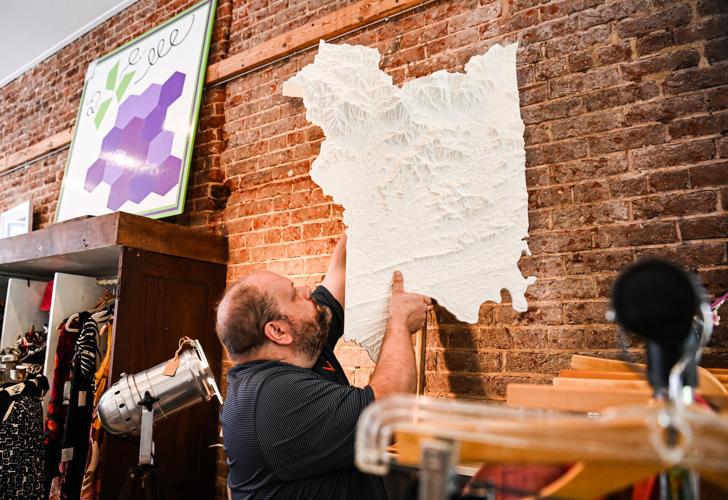 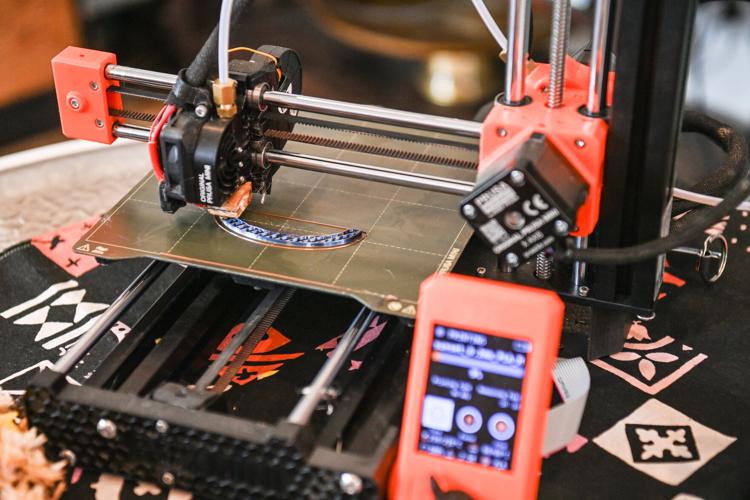 Nicholas Bartley’s 3D printer is pictured at the HeART of Nelson Artisan Collective on Oct. 28. 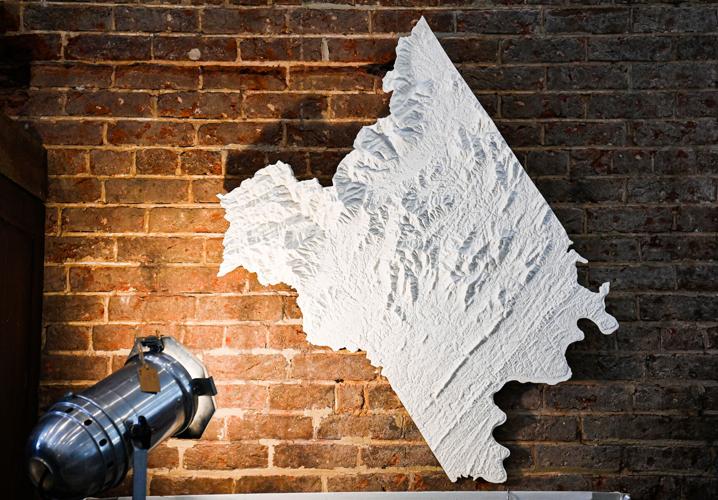 A 3-d printed sculpture of Nelson County at the HeART of Nelson Artisan Collective on Friday, Oct. 28, 2022. 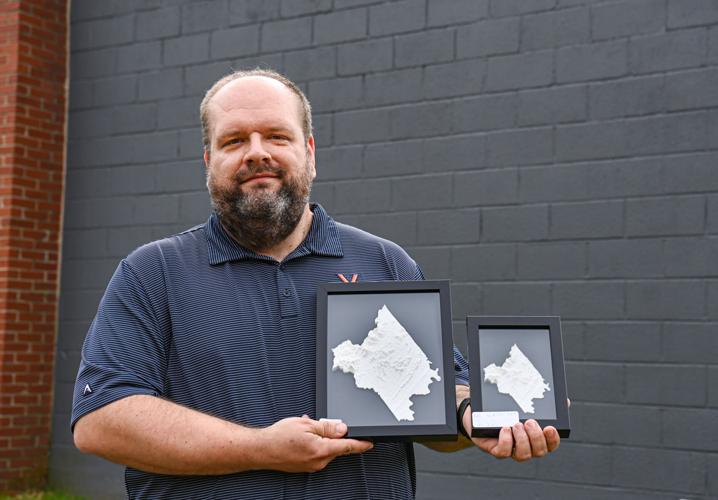 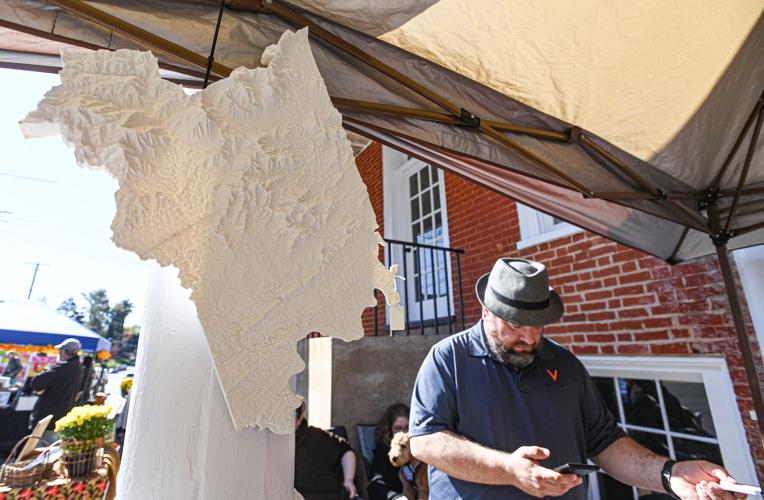 A 3D-printed sculpture of Nelson County by Nicholas Bartley is shown at the Lovingston Street Festival in Nelson County on Saturday. 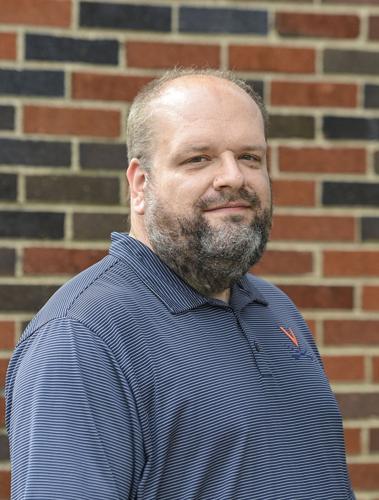 Nicholas Bartley at the HeART of Nelson Artisan Collective on Friday, Oct. 28, 2022.

For today’s crafters, there’s a YouTube video on how to do just about everything. But when Lovingston artist Nicholas Bartley was growing up, he had to head to the library. While other children were looking for stories, he’d be in the arts and crafts section, researching origami patterns and woodworking plans.

Bartley’s creations stand out in the HeART of Nelson Artisan Collective in Lovingston — especially the oversized topographic model of Nelson County that hangs over the shop’s fireplace. It’s about three feet tall and took over 600 hours to 3D print.

He also sells smaller scale Nelson magnets and art pieces, in addition to nightlights and cookie cutters, out of the store on Front Street.

Bartley’s 3D printer was buzzing back and forth in a corner of the shop on Oct. 28. It was printing, layer by layer, a vertical image of a sunset from a spool of multicolored plastic thread. Bartley explained he uses a biodegradable, corn-based plastic called polylactic acid, or PLA. Leave one of his pieces out in the elements or in the sun long enough, and it will eventually disintegrate.

3D printers create an object by laying down layers of plastic thread — sort of like if you kept scribbling back and forth over the same area, but each pass of your pen added another 3D layer, until the square you filled in became a cube. Each layer the 3D printer puts down is about a tenth of a millimeter, and Bartley said some of his creations only take a few layers while others are thousands thick.

“The terrain, it just started because I live here and I thought everyone else would like to see it,” Bartley said of the Nelson models.

“The shape of the county itself is fairly unique. Some other counties in Virginia are just a square, more or less, with hard corners, but Nelson’s got that nice organic shape defined by the James River on the right.”

To create the Nelson maps, Bartley explained he used LIDAR data from a series of flyovers of the state, where laser beams were reflected off the ground from airplanes to gauge height. From that information he was able to create a 3D model of mountains, valleys, ski slopes, buildings and even roads and railroads. Bartley said it was a terabyte of data to download — his smaller Nelson pieces don’t feature nearly as much detail.

Bartley lives in Lovingston with his wife and two children and is a space manager for the University of Virginia — “inner space, not outer space.” He started at the university in the early 2000s, making 3D maps of the campus before such printers were commercially available or very reliable. He said now he does more technical drawing than mapping for the university, using computer-aided design, or CAD, software.

Bartley said he’s been selling his creations at the HeART of Nelson for about 18 months, alongside other local artists. He has a selection of cookie cutters for sale but also takes custom orders through his website sunset-3d-crafts.square.site or via his contact information available at the store at 611 Front Street. Bartley’s made logo cookie cutters for local businesses and even a cookie cutter of his wife’s supervisor’s face for her birthday.

The idea originated through his wife’s work: “As they were getting their COVID shots, they had a COVID clinic and I thought, ‘You know, they need to give out something. I could just make some cookie cutters of a COVID.’ And so I made them COVID cookies.”

A cookie cutter takes about two to four hours to print, but it’s not always as simple as sitting back and letting the machine do its work — there are a lot of things that can go wrong, and printers require frequent mechanical repairs.

For the nightlights Bartley makes, he varies the thinness of the print to create an image when a light behind the plastic is illuminated. The 3D printing technology is new, but the idea isn’t; centuries ago, artists made porcelain shades for candles called lithophanes using the same technique.

Like many creative people, Bartley doesn’t do just one thing well — he said he’s been 3D printing for five years but has been a “maker” all his life. He also does electronics work, woodworking, metalwork, welding and baking.

All that comes together for some highly detailed costumes. During an interview days before Halloween, Bartley showed off a picture of him and his wife dressed as the characters “Mad-Eye” Moody and Professor Minerva McGonagall from the “Harry Potter” series. Bartley 3D printed a headpiece with a mechanical rotating eyeball and a light-up wand for his costume — both near-exact replicas of the movie props.

Bartley’s happy with sales at HeART of Nelson but said the 3D printing business is part of a longer-term plan: his dream is to start a community maker space in Lovingston. He has all the making skills but recently started in an MBA program to gain the business know-how.

Nicholas Bartley’s 3D printer is pictured at the HeART of Nelson Artisan Collective on Oct. 28.

A 3-d printed sculpture of Nelson County at the HeART of Nelson Artisan Collective on Friday, Oct. 28, 2022.

A 3D-printed sculpture of Nelson County by Nicholas Bartley is shown at the Lovingston Street Festival in Nelson County on Saturday.

Nicholas Bartley at the HeART of Nelson Artisan Collective on Friday, Oct. 28, 2022.