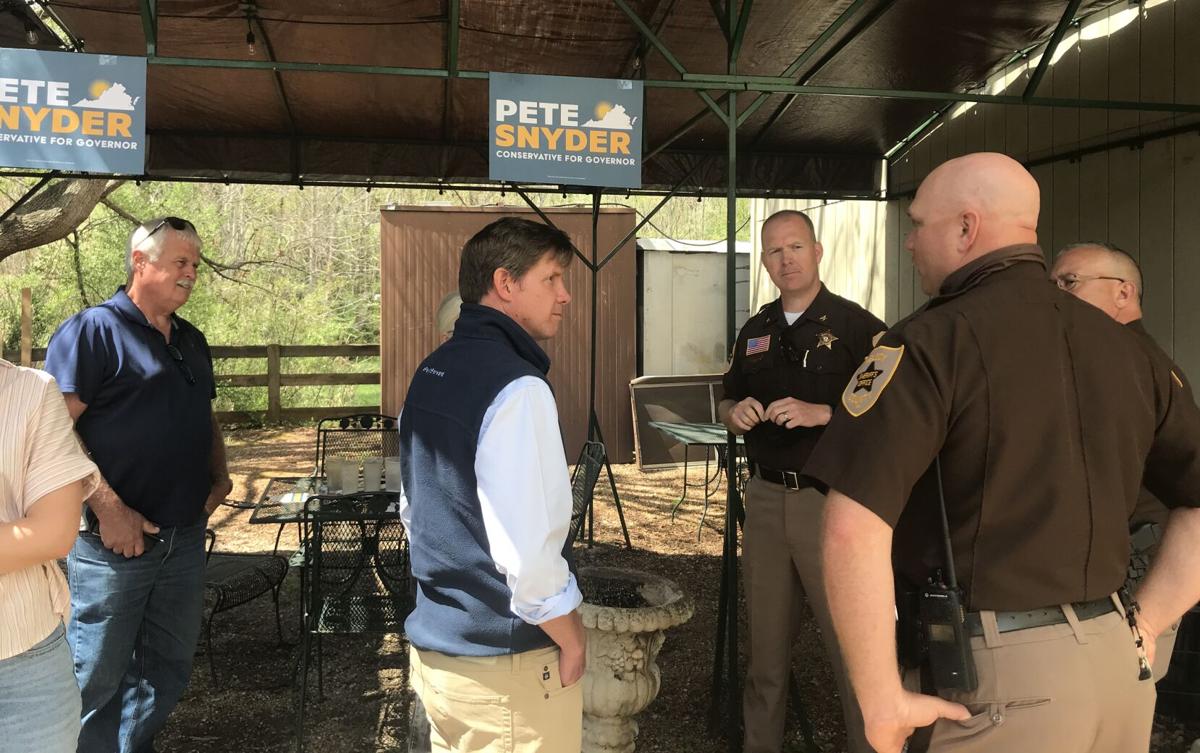 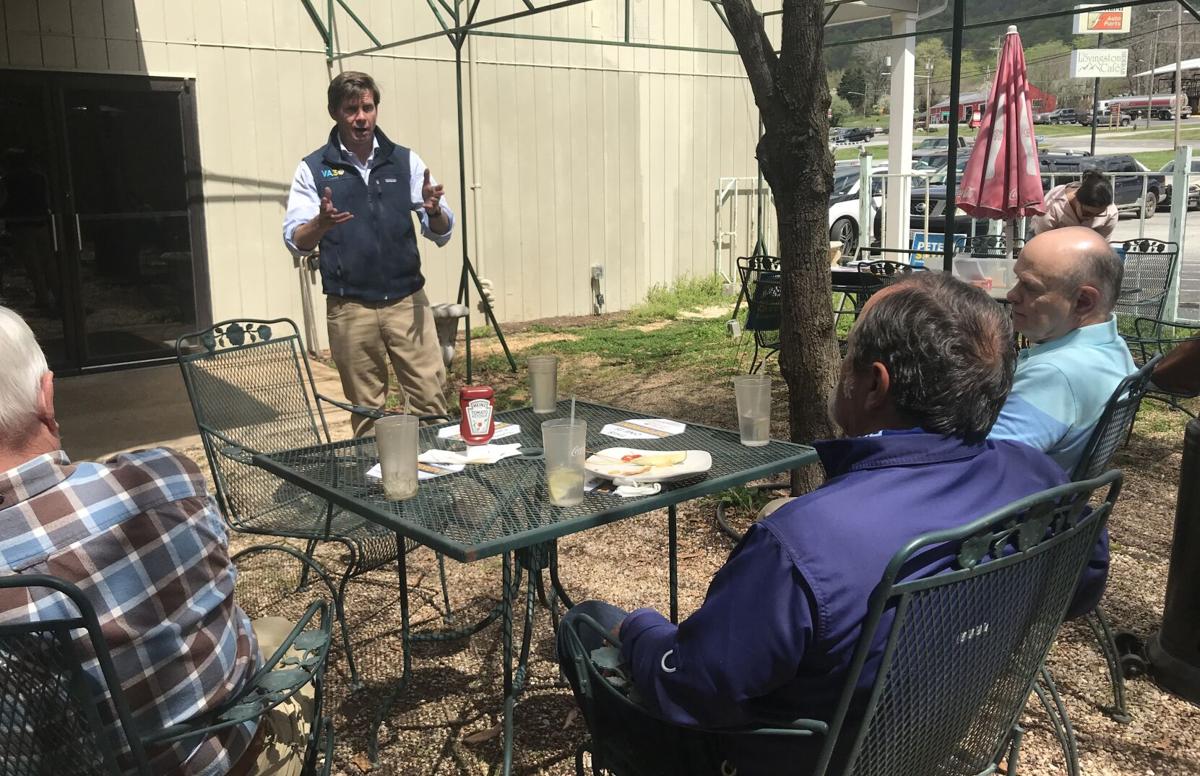 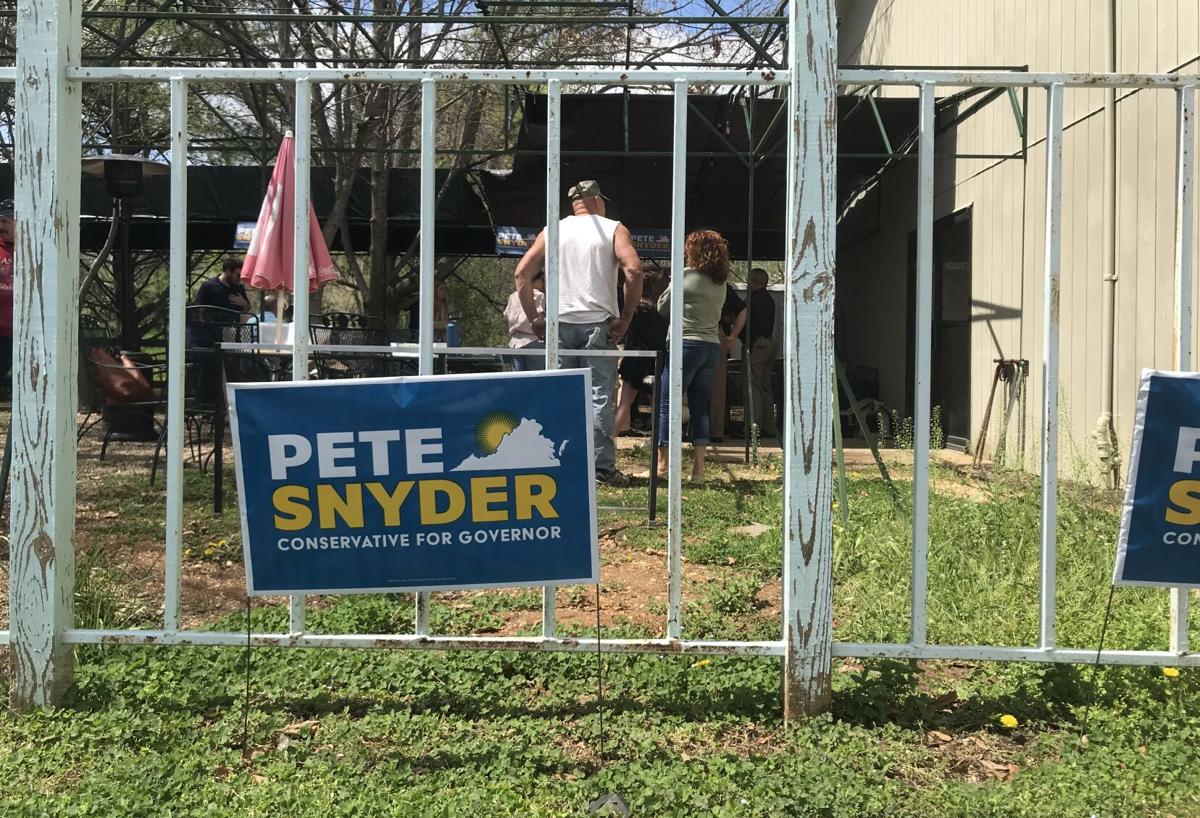 People gather at the Lovingston Cafe in Nelson County on Monday for a visit from gubernatorial candidate Pete Snyder.

Only weeks away from the May 8 unassembled Republican convention, gubernatorial candidate Pete Snyder stopped in Nelson County to speak with residents.

During the remarks he made to roughly a dozen people gathered at the Lovingston Cafe on April 13, Snyder outlined his priorities if elected, including fully reopening Virginia schools for in-person learning, removing mandates he said are hurting small businesses and protecting civil liberties that were “absolutely shredded” under what he described as the guise of a pandemic.

Snyder said he believes he has the “right backbone and the right fight” in him to get the commonwealth “out of this horrible mess.” He also referenced his six-point plan to restore confidence in election security.

“Our right to vote is one of our most sacred rights in this republic that we have and that’s why ... I will not be your next governor if my campaign does not have the most extensive, most elaborate, most expensive ballot integrity and electoral security operation,” Snyder said.

Snyder is a small business owner and entrepreneur, according to his campaign’s website. At 26, he founded the social media marketing company New Media Strategies and later founded Disrupter Capital, an angel capital investment firm.

At the onset of the COVID-19 pandemic, Snyder and his wife launched the Virginia 30 Day Fund, a nonprofit focused on saving small businesses and jobs in the commonwealth by providing fully forgivable loans, the website states.

In an interview with the Nelson County Times following the event, Snyder criticized the recent legalization of small amounts of marijuana for recreational use and limited home cultivation, which the General Assembly passed in a 21-20 vote and goes into effect July 1.

Virginia will be the first Southern state to legalize recreational marijuana and joins nearly 20 other states that already have done so.

During the event, Snyder also took aim at the “woke mob” and cancel culture mentality. He made reference to the recent name change from the Thomas Jefferson Health District to the Blue Ridge Health District that went into effect the beginning of this year. The district includes Albemarle, Fluvanna, Greene, Louisa and Nelson counties and the city of Charlottesville.

“When does it end?” Snyder asked.

Gary Scott, of Shipman, attended the meet-and-greet and previously saw Snyder speak in Charlottesville. He said he supports Snyder because of his business experience and agrees with his stance opposing cancel culture.

“I think it will take an outsider like Pete to have any success winning the governorship and to me it’s not so much Republican as it is his ability to bring in independents,” said Scott, who considers himself an independent.

Carlton Ballowe, chair of the Nelson County Republican Committee, said he attended the event to support the party despite the committee not being able to officially endorse a candidate until after the nomination process.

Ballowe said with a field of candidates who align on most issues, he was looking for a way to differentiate one from the other.

“Whereas every other one in recent memory, I have picked a horse fairly early on and stayed with it, but I haven’t been able to do that in this case,” Ballowe said.

In speaking with Snyder, Ballowe asked if the gubernatorial candidate supports a convention of the states through Article 5 of the Constitution, which gives states the power to amend the document. He said a fundamental change is needed to reign in the federal government.

“I think we’re on the verge of going over a cliff and we have to roll the dice, even if there are some risks associated with a convention of the states,” Ballowe said.

Snyder cautioned against such action, though, stating it might open the door for other amendments the party doesn’t want to see.

“I wouldn’t be running for governor of Virginia if I felt that America’s best days weren’t ahead, but I think we have to create them and we have to win this year,” Snyder said.

Update: Portion of U.S. 250 will remain closed for 'extended period' as debris continues to fall

Update: A portion Rockfish Gap Turnpike will remain closed for an "extended period" following a Monday rockslide, according to an update Wedne…

"It feels like everything that I've done so far in life has prepared me for something like this and yet I had no idea that a position like this would ever exist," Kristen Musselman said.

A Rustburg man was killed Tuesday after a tree fell on a vehicle in the Monroe area of Amherst County, the county's chief public safety official confirmed.

Nelson County Public Schools is on the hunt for a new person to take the helm of the county’s only middle school for the 2021-22 school year.

Sitting at her desk in what used to be the administrative offices of Nelson County’s former segregated high school, Johnette Burdette said she…

“We’re still seeing big gains in the outlying areas because they have the inventory and, for the prices, we have a great portion of the area population that can afford homes there.”

A proposed 184-foot Class C monopole cell tower has gained the support of the Nelson County Planning Commission. The request now will go before the county's board of supervisors in the coming months for final approval.

People gather at the Lovingston Cafe in Nelson County on Monday for a visit from gubernatorial candidate Pete Snyder.