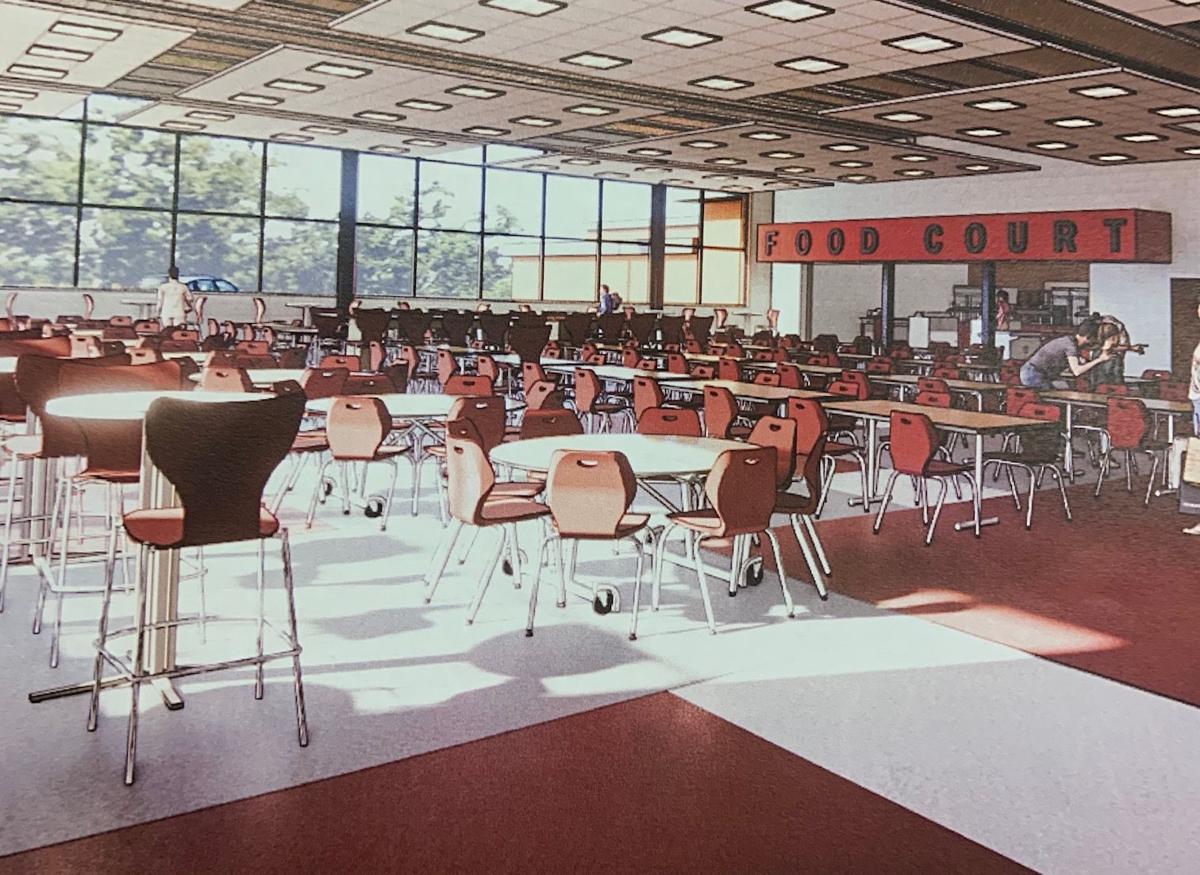 A potential new 1,600-seat auditorium at Amherst County High School, a project school officials have said is long overdue and much needed, sparked discussion during a joint committee of county and school leaders on Sept. 1.

The committee, consisting of the chair and vice chairs of the Amherst County Board of Supervisors and county’s school board, as well as County Administrator Dean Rodgers and Amherst County Public Schools Superintendent Rob Arnold, met for the first time in 2020 to discuss capital improvement and broadband expansion needs.

Crabtree Rohrbaugh & Associates, a Charlottesville company with which the Amherst school division is working in studying facility improvements, presented architectural renderings of a new auditorium at a July school board meeting. One option would locate a new auditorium in the current rear parking lot with an adjoining lobby leading into a common area connecting to a revamped cafeteria.

While the idea is only a concept and no decisions have been made, school board members expressed excitement with a project they said would serve both the students and the Amherst community.

Arnold said Amherst lacks space for large-scale indoor gatherings and the current auditorium holds 350 people. “It is not adequate for community needs,” Abby Thompson, vice chair of the Amherst County School Board, said of the current space.

Constructing a new auditorium and common area with revamped dining space could range from $6 million to $8 million, Arnold said. “That would be an obviously big-ticket item,” he added.

Another option of remodeling the existing auditorium could cost $2 million, according to Arnold.

“The space is still not adequate,” Thompson said of the current auditorium’s square footage.

The committee, which meets several times a year to keep communication open between the two county boards, met for the first time in 2020.

Claudia Tucker, the board of supervisors’ chair, said she would have like to see an upgrade to the auditorium when her kids were at ACHS.

Based on a “back-of-the-envelope” estimate, the debt service for the potential project could be served by a 1-cent increase in the county’s real estate tax, according to Rodgers. He said he supports the idea of community event or fundraising to help support the schools, which could benefit such a project.

“I see it being done in other places,” he said of events raising revenue for school divisions.

“This is not just for the school,” Priscilla Liggon, the school board’s chair, said of a new auditorium. “It’s for the community.”

Arnold also spoke of other CIP needs the division is facing and the goal of presenting a plan to supervisors this fall. While the division’s buildings are in good shape, they require measures to keep them up and running, he said. The CIP plan will prioritize larger projects that are beyond what the division can fund in its regular operating budget, according to Arnold.

Madison Heights Elementary School and Amherst Middle School each have grading work needed to protect against structural issues, he said in describing some projects as more urgent.

“These schools are not young schools,” Liggon said. “Things have to be done to keep them up.”

The committee also discussed the ongoing push to make high-speed, reliable internet accessible and affordable throughout the county, an issue that has come to the forefront during the COVID-19 pandemic. Nearly 40% of the student population is engaging in remote learning and broadband is crucial, according to school officials.

The county is awaiting a study from a consultant this fall on a build-out plan for countywide broadband expansion. Meanwhile, the division has $450,000 in federal stimulus money that can be spent next year or in 2022 on broadband, which go toward the board of supervisors’ expansion efforts.

“We have the ability to take what you guys started and push it further out,” Arnold said of strides in broadband upgrades.

Arnold said many students have inadequate internet access, some within a few miles of the town of Amherst and Madison Heights.

“The further you go, the worse it gets,” he said of coverage in rural areas.

Bridging the gaps to rural communities is a major priority as more students and residents are learning and working at home than usual.

“We all want to work together and as quickly as we can,” Liggon said. “The sooner we try to figure it out collectively the better.”

'Old Amherst through and through': Page Stinnett, longtime printer at local paper, left mark on the community

Remembering the life of Page Stinnett, a Clifford native and retired longtime printer, linotype operator and production manger for the Amherst and Nelson weekly newspapers.

A Madison Heights automotive garage and towing service is set to expand and construct a new facility on Lakeview Drive.

Amherst County is a step closer to regulating solar energy facilities and projects, both small and utility scale, in its zoning ordinance.

With $468,900 more revenue than expected, the Amherst County Board of Supervisors has restored several items previously considered but scrappe…

After more than a year of planning among the Amherst County Board of Supervisors, several changes to business taxes are set to take effect Jan. 1.

Wearing an American flag- decorated mask, Democratic challenger Nicholas Betts during a recent visit to Amherst laid out his platform for his …