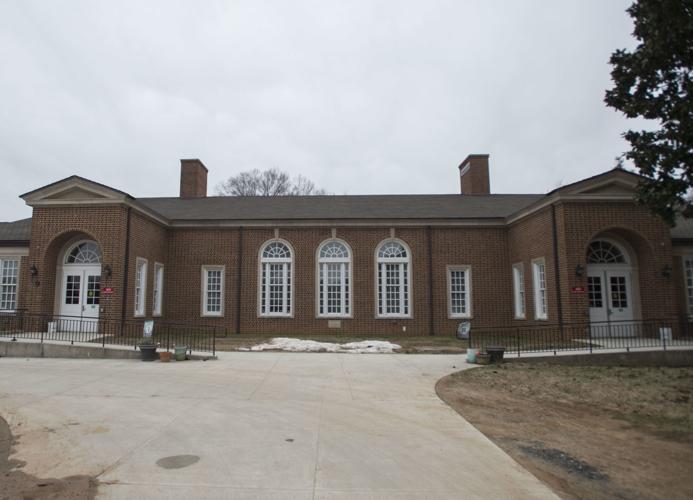 Building 12 at the Central Virginia Training Center is among several newer, more modern buildings on the Madison Heights campus known as the Lower Rapidan. The state is tackling paying off outstanding debt on the newer buildings as redevelopment planning efforts for the CVTC campus are in full swing. 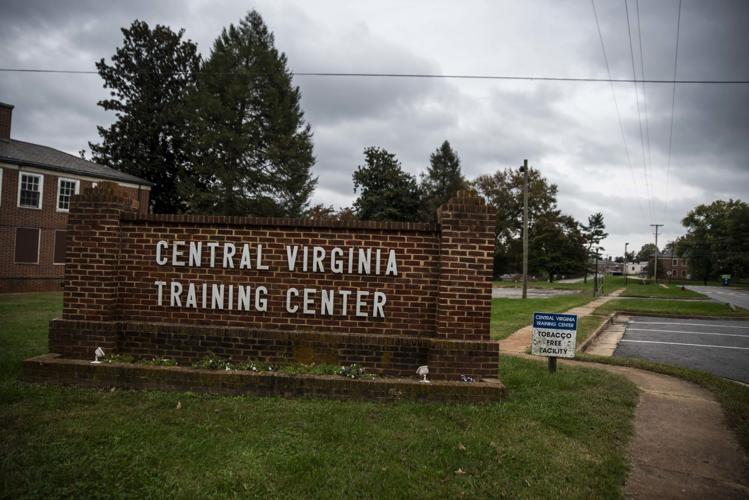 The entrance into the Central Virginia Training Center on Colony Road in Madison Heights is shown. 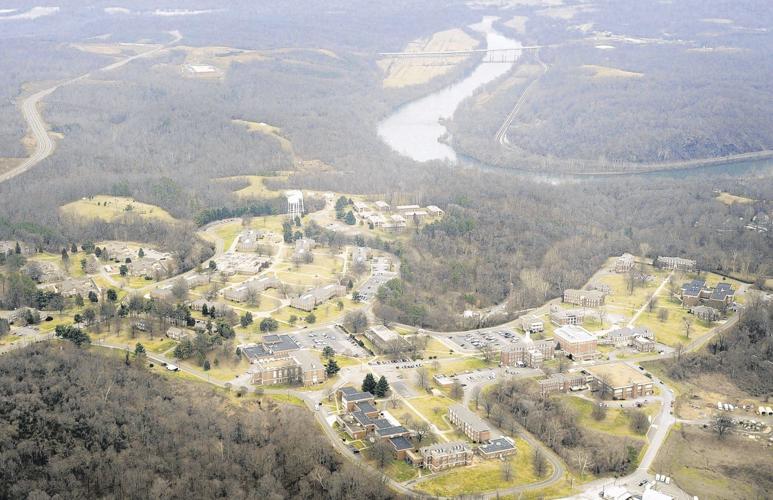 An aerial view of the Central Virginia Training Center in Madison Heights on Thursday Jan. 26. Sam O'Keefe/ The News & Advance

A sign on Central Virginia Training Center’s campus explains the history of the Madison Heights property, which was founded in 1910 as the Virginia State Epileptic Colony. It served its first patients in 1911.

A pair of state budget amendments proposed by Sen. Steve Newman, R-Lynchburg, would have a major impact on the Central Virginia Training Center property, a shuttered state-owned complex in Madison Heights that formerly served residents with disabilities.

Newman is pushing the amendments during the ongoing General Assembly in Richmond as part of SB30. One seeks $22 million to pay off remaining bonds the state owes on the CVTC property while the other pushes for $2.6 million to fund a proposed regional crisis receiving center pilot program for a portion of the training center grounds on Colony Road.

Newman lobbied against the closure of CVTC, which relocated its last remaining resident in spring 2020. Now that the property of more than 300 acres and roughly 90 buildings is shut down, Newman said in a phone interview he wants to see the remaining debt paid off to free up the property for future uses.

“I do think the state has an obligation to defease the bonds because, if we don’t, it could be a blighted property for 20 years, and I’m not OK with that,” Newman said.

The “defeasance of bonds” wording in the budget amendment refers to a financing strategy for repaying loans. Newman, who serves on the Senate’s Finance and Appropriations Committee, said the state has bonds on several newer buildings at CVTC.

“It’s a lot of money still sitting on those bonds,” Newman said.

Last year, Newman helped secure about $4 million for the effort and just more than $18 million remains, so he hopes to get that secured this year.

“This is a year where the state has a reasonable amount of one-time money,” Newman said, adding it’s a good use for such spending that doesn’t involve recurring money in future years. “I think it’s the responsible thing to do.”

Amherst County and Lynchburg-area officials and business leaders are working to position the CVTC site, the county’s one-time largest employer that provided more than 1,000 jobs in its heyday, for future redevelopment.

Sen. Mark Peake, R-Lynchburg, said in an interview he is supportive of the state putting more money toward paying off the remaining loans.

“I think it’s the state’s obligation to get that resolved so that property can be put back into use for the Amherst County and Region 2000 area,” Peake said. “We’ve got to make that property productive.”

Newman said demolition and asbestos abatement is needed for some buildings on site.

“My thinking is the property value is such so that a new company owner can take care of that,” Newman said. “My plan is to get the [remaining bonds] retired.”

Newman said he can’t envision a state use of the property, so he would like to see Amherst County officials engage in a planning process to find the most suitable way forward for the site. He added he believes it is well-positioned for eventual private sector use.

“I do not believe there is a known state interest in the property,” Newman said. “So my expectation is if we can defease the bonds and determine the sale price can cover the demolition and asbestos removal, I think I would be pushing for surplus property designation.”

Meanwhile, Newman’s budget amendment on the crisis receiving center at CVTC would direct DBHDS to contract for a two-year pilot program with a Community Services Board (CSB) for the purpose of developing and implementing a center serving adults in the counties of Amherst, Appomattox, Bedford and Campbell and the city of Lynchburg.

The center would evaluate emergency custody orders (ECO) outside of the hospital emergency department. Newman said that would provide much-needed relief for Lynchburg-area law enforcement, which spends much time and resources dealing with ECOs.

The budget amendment Newman proposes directs the state to lease at a moderate price four of the more recently renovated buildings at CVTC to provide a location for the pilot program, which would provide “residential crisis stabilization, substance abuse detoxification, and pre-admission for [ECOs], according to a summary of the bill.

The CSB would be authorized to use a total of 12 beds designed for both crisis stabilization and detoxification services and would be directed to contract with law enforcement agencies, if the measure passes.

“I think that’s a model that can work,” Newman said of the envisioned center.

He said he hopes the measure can give the area a shot at getting out of “the mess” of law enforcement overwhelmed with handling ECOs and temporary detention orders. Newman said he feels the state currently has the worst TDO and ECO legislation in the country, explaining those cases are dumped on law enforcement and adds “mental health sitter” to duties of an already highly challenged profession.

Newman said the current system has to change.

“This is incredibly bad,” he said. “It’s the number one issue for our [Lynchburg-area] police and sheriffs.”

Newman said he is working during the ongoing session to tackle the immediate problem, which also involves measures to pay law enforcement more money, and a long-term solution for the state to study the matter and find the most innovative best practice for a major adjustment moving forward.

Amherst County Sheriff E.W. Viar said in an interview he is fully on board with a regional crisis center setting up in a portion of CVTC and taking pressure off his department.

He said matters involving those in crisis with mental health issues often take up much time and resources, including pulling from security staff his office provides at the Amherst courthouse and overtime pay.

“We have to sit there with them and we can’t walk away,” Viar said. “We shouldn’t have to sit at the hospital once we get them there. It shouldn’t be up to local law enforcement. We can’t just sit there eight and 10 hours. It’s hard to get people to come in and do it anymore.”

Viar said he is pleased with Newman’s efforts to secure more pay for law enforcement and he thinks a regional crisis center would be a benefit to the region.

“I think everybody in this area would be tickled to death, as far as police,” Viar said.

In partnership with the Economic Development Authority of Amherst County, the county’s Route 29 Business Beatification Committee has increased…

Amherst County’s new transfer station on the site of the county’s current landfill on Kentmoor Farm Road is set to begin operating this month.

Blue Ridge Medical Center, Inc. in Arrington and Johnson Health Center in Madison Heights each will receive $65,500 in federal funding as part…

For the second time in a decade, Amherst County officials are pursuing a study of the county’s fire and emergency medical services through the Virginia Fire Services Board.

As more recreational activity picks up at Mill Creek Lake Park in northern Amherst County, the board of supervisors has approved hiring a part…

A public hearing is scheduled for Aug. 16 on a proposed change to Amherst County’s zoning ordinance that designates campgrounds in the Agricultural Residential (A-1) district from a permitted use to a special exception use.

More than a year after a judge found a Madison Heights man accused of murdering his father was competent to stand trial, the case again is del…

Safety, 'back to basics' education at forefront of new school year in Amherst

With Amherst County Public Schools heading into a new school year Aug. 17, the division is focusing on safety and what Superintendent William …

Building 12 at the Central Virginia Training Center is among several newer, more modern buildings on the Madison Heights campus known as the Lower Rapidan. The state is tackling paying off outstanding debt on the newer buildings as redevelopment planning efforts for the CVTC campus are in full swing.

The entrance into the Central Virginia Training Center on Colony Road in Madison Heights is shown.

An aerial view of the Central Virginia Training Center in Madison Heights on Thursday Jan. 26. Sam O'Keefe/ The News & Advance

A sign on Central Virginia Training Center’s campus explains the history of the Madison Heights property, which was founded in 1910 as the Virginia State Epileptic Colony. It served its first patients in 1911. 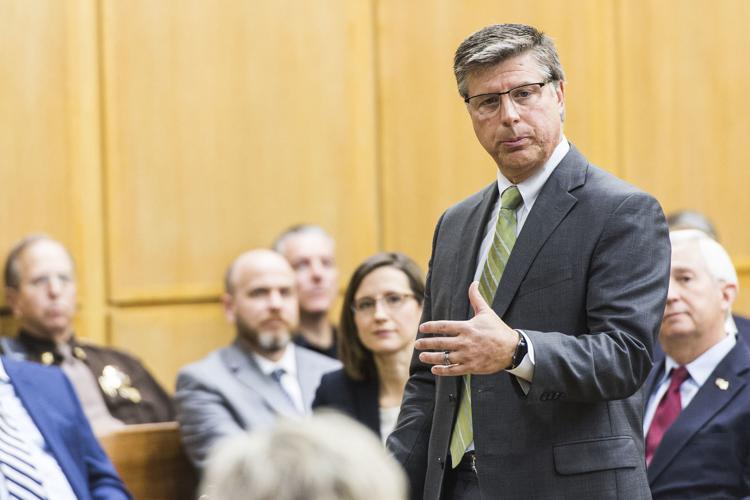