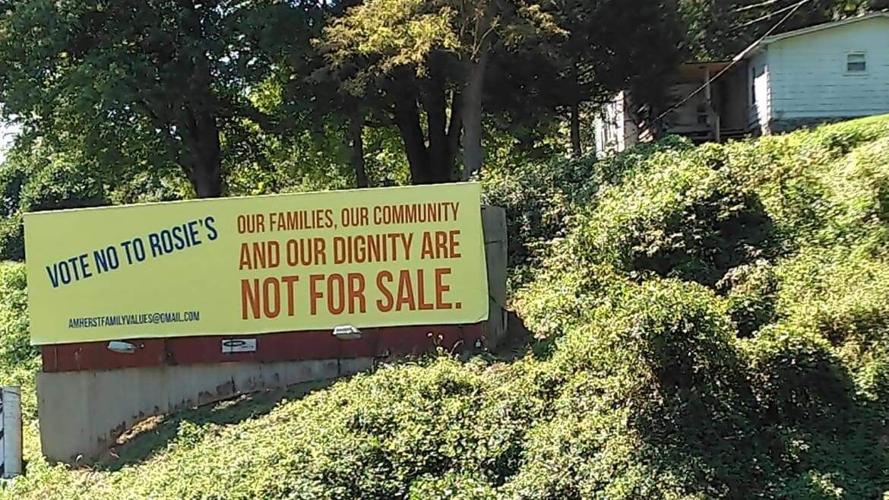 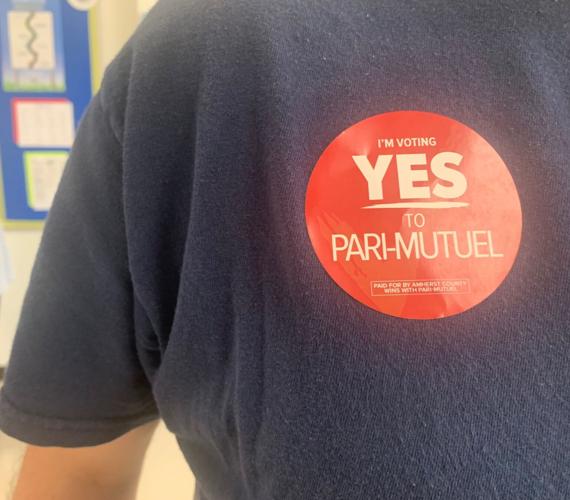 Several Amherst County residents wore stickers in support pari-mutuel wagering, a measure that if passed via referendum allows a Rosie’s Gaming Emporium to proceed in Madison Heights, during the board of supervisors’ Sept. 7 meeting in which the matter was discussed.

County residents are talking about whether they support the possibility of a Rosie’s Gaming Emporium setting up operations in Madison Heights.

A referendum on pari-mutuel wagering, which if passed would allow a new Rosie’s emporium to be constructed in the Seminole Plaza shopping center, is on the ballot for the Nov. 2 election. About 2,000 registered voters in the county petitioned to have the referendum move forward and the Amherst County Board of Supervisors voted 3-0, with Chair Jennifer Moore absent and Supervisor David Pugh abstaining, at its Sept. 7 meeting to pass a resolution in support of Rosie’s locating in the county.

Pugh said he abstained because he didn’t want the board to influence a decision he said is best left up to the voters. Proponents of a Rosie’s in Madison Heights have said it would bring needed jobs to the county, bolster the tax base and attract business activity to southern Madison Heights where revitalization is a priority.

Opponents have said the adult entertainment facility fosters gambling addiction and would have detrimental effects on families and residents and fear it will lead to more crime, among other concerns.

A Facebook group opposing the prospective business has launched and a GoFundMe page rallying support against it as of Sept. 16 has raised $4,870. A rally also is planned for 7 p.m. Sept. 30 at Temple Baptist Church with Les Bernal, executive director of Stop Predatory Gambling, a national group, set to speak.

“Rosie’s is not an arcade,” said Gene Drake, an Amherst resident opposing Rosie’s, during the board’s Sept. 7 meeting. “[It’s] a sterile money grab and it’s done by predatory practices.”

Board members Claudia Tucker, Jimmy Ayers and Tom Martin said their support is based on the business activity it will bring and continuing the county’s mantra that Amherst County is open to businesses who want to invest in the community.

“These folks deserve the opportunity to come to Amherst to do business to help us as a community provide a better community for the people who live here,” Ayers said.

The board’s resolution lists the following benefits it states Rosie’s would bring to Amherst County:

A $40 million investment into the Seminole Plaza shopping center

New tax revenue for the county estimated at about $1.9 million annually, including an estimated $800,000 from gaming devices

Creation of at least 100 jobs with an average compensation package totaling $47,000 annually

Participation in Rosie’s Gives Back program, which has made direct monetary and in-kind donations of more than $1.3 million across Virginia over the last few years, and a commitment to contribute at least $100,000 annually to charitable causes and nonprofits in the Amherst region.

A new source of entertainment that will drive tourism into the county.

The county also says the project will bring “a much needed and overdue facelift for that area of Madison Heights.” The millions in revenue will benefit schools, roads and community programs through private investment and without tax breaks or incentives, a Sept. 8 news release from Amherst County states.

“We need new entertainment and dining options in Amherst County,” Tucker said in the release. “Rosie’s has established a sterling reputation as a strong economic and local community partner across the Commonwealth. Rosie’s will grow our local base and bring tourists to the county to support other businesses as well. It’s a win-win.”

The release said the Amherst County Sheriff’s Office has consulted with New Kent County, which has a Rosie’s, to “confirm their experiences of very issues of law enforcement concern at or around Rosie’s facilities.”

“On the infrequent occasions where minor criminal activity has occurred, the Rosie’s security system was of great benefit to New Kent in the effective prosecution of cases,” the release said.

Rosie’s representatives have said in a recent interview the typical customer is a woman in her 50s who spends about $50 per visit. The company is a proponent of responsible gaming and is an active member of the Virginia Council on Problem Gambling that takes measures to assist those who develop addictions to deal with their issues, according to the county release.

The board is convinced it is not introducing “any new, untoward influences into county culture” and its focus is to promote business while striving to reduce the tax burden on homeowners, the release said.

“Promoting businesses that want to locate here here is the most effective way to raise the revenue to provide more services the public wants,” the county said in the release. “Each new business attracts others that will draw support from it; as our population grows, the quantity and quality of business choices available to Amherst citizens will also grow.”

If the referendum passes Rosie’s will take full ownership of the shopping center and construct a new, standalone building behind Big Lots. Rosie’s is committed to working with existing tenants to ensure their needs are met if they wish to remain in the shopping center, according to county officials.

Supervisors passed the resolution ahead of early voting, which officially kicked off Sept. 17.

“I hope something positive comes of it,” Pugh said of the referendum.

The late Jared Tate instilled in his daughter, Sadie, a deep love of star gazing and watching meteor showers.

In a Jan. 3 work session to prioritize capital improvements spending in the upcoming 2023-24 fiscal year, the Amherst County Board of Supervis…

Several Amherst County residents wore stickers in support pari-mutuel wagering, a measure that if passed via referendum allows a Rosie’s Gaming Emporium to proceed in Madison Heights, during the board of supervisors’ Sept. 7 meeting in which the matter was discussed.