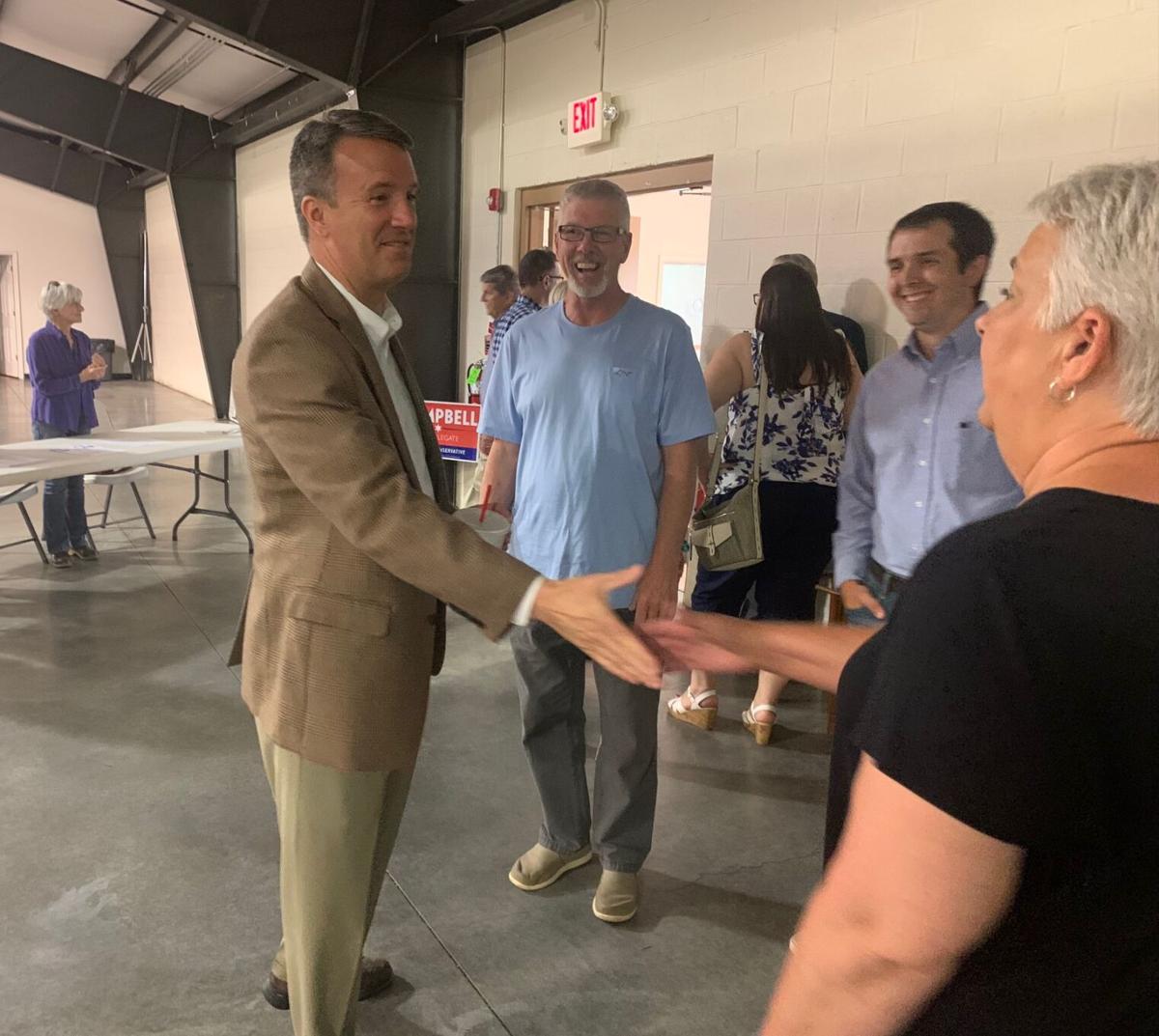 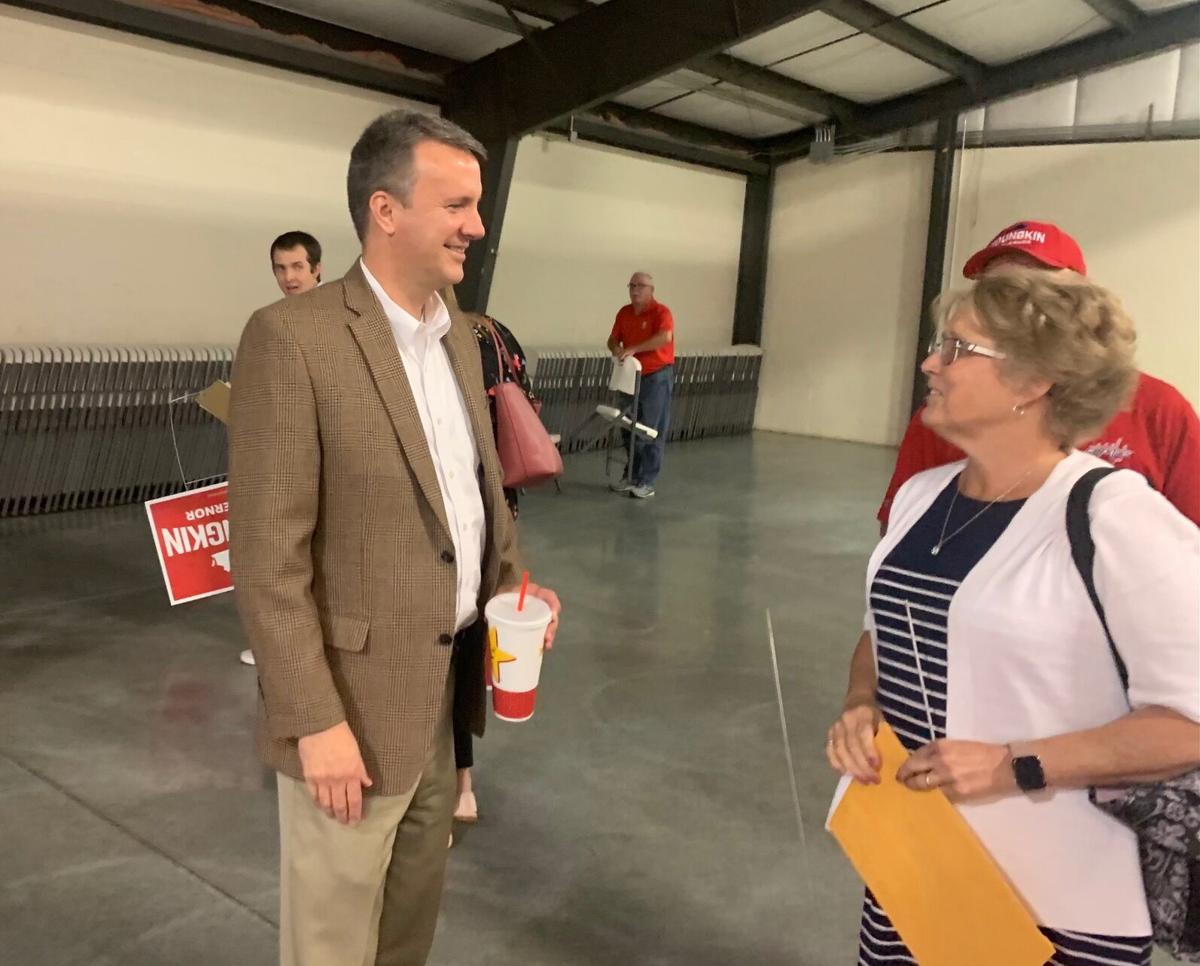 U.S. Rep. Ben Cline, R-6th, chats with Abby Thompson, vice chair of the Amherst County School Board, during an Amherst County Republican Committee meeting on May 24.

MADISON HEIGHTS — Ready to fight and ready to win.

Those slogans fired up a crowd of Amherst County Republicans gathered at the Madison Heights Community Center Monday night eager to turn back the tide of Democratic leadership in Richmond in the Nov. 2 election. U.S. Rep. Ben Cline, R-6th District, said he strongly urges all residents to back Glenn Youngkin for governor “to restore leadership in Virginia,” as well as Winsome Sears for lieutenant governor and Jason Miyares for attorney general.

“It is critical that we get our families, our friends, our neighbors involved this year because we have got not just a fight in Washington that I’m proud to represent you all every day when I go to fight in Washington, but it’s a fight in Richmond too,” said Cline, a former delegate of 16 years in Virginia’s House 24 district, which represents parts of Amherst County. “We see what’s happening in Richmond now that the Democrats have taken over in the House and the Senate and our statewide elected offices. ... They’re trying to turn Virginia into eastern California. Those are not the values of the commonwealth of Virginia, those are not the values of Amherst County.”

Describing Amherst as “the center of Republican politics in the state,” Cline said the county helped clinch the GOP nomination for Youngkin in a recent seven-candidate race and the businessman is ready to deliver for the county as the next governor.

“I am excited to get to work this fall,” Cline told the dozens gathered. “I know each one of you recognize just how important this fall’s elections are because we have seen what the left, in just two short years of control in Richmond, has done, and we can stop it if we step up and remind people what the values of Amherst are. Those are the values we want to see represented down in Richmond.”

Cline said the majority of Amherst voters want a secure border, oppose efforts to defund police and hold firm to pro-life, pro-gun rights values. Five months into his second term, Cline said each time he visits Amherst he is fired up to go back to Washington, D.C. and fight House Speaker Nancy Pelosi even harder.

“We’ve got of work to do up in Washington, D.C., because the swamp is back and it's back with a vengeance in the White House. Joe Biden has brought the swamp back with him,” Cline said

“Where we want government out of our lives and lower taxes, Joe Biden wants to raise your taxes and make government even more involved in your daily life,” Cline said. “Where Joe Biden wants to federalize the elections in this country, have public dollars spent on political ads for people like Nancy Pelosi and ‘the Squad’ [a group of six Democratic members of the U.S. House of Representatives] — I say no to do that. I say the people of Amherst don’t want federal-run elections, they want local-run elections.”

Cline recently voted against legislation to create an independent commission to investigate the Jan. 6 attack on the U.S. Capitol when a mob of supporters of former President Trump stormed the building to stop congressional affirmation of Biden’s win. All 217 Democrats in the House backed the measure and 35 Republicans joined in supporting the bill.

In a brief interview, Cline said he supports a commission “that is fair, balanced and nonpartisan” and he does not trust the bill Pelosi and Democrats pushed through.

Del. Ronnie Campbell, R-Rockbridge, succeeded Cline in the House 24 seat and seeks a second term. He faces a challenge in the June 8 primary from Republican Mark Reed, of Lexington. Amherst resident Sam Soghor is the Democratic candidate for that seat.

Campbell said during Monday’s GOP meeting he has a strong conservative voting record in Richmond and he hopes to continue.

Del. Wendell Walker, R-Lynchburg, seeks a second term Nov. 2 and is on the ballot against Democrat Natalie Short. Walker said during the meeting it’s a highly important year for Virginia and he believes the GOP ticket is the strongest it’s been in years.

“It’s no fun serving in Richmond under Democratic leadership because folks, in Richmond those values Democrats have are not Virginia values,” Walker said.

Walker said “election integrity” must be a priority this year and added he believes a $500,000 state surplus should be returned to Virginia’s taxpayers.

“I’m tired of living under executive orders,” Walker said in criticizing Gov. Ralph Northam’s handling of the COVID-19 restrictions. “The Constitution was never intended to be ruled by a king who thinks executive orders is the only way to govern because he still has his thumb on this pandemic."

We've got a fight on our hands," Wilkins said.

Person rescued from the James River in Amherst County

Amherst County and Lynchburg area emergency workers rescued a person from the James River early Monday, according to a news release and Facebo…

Amherst County’s 2021-22 school year will see the high school and middle schools return to starting the school day around 8 a.m. while element…

Amherst town resident Tony Robertson has filed to run for the District 2 seat on the Amherst County Board of Supervisors.

AMHERST — A Madison Heights man was found guilty of aggravated sexual battery of a teenager at the close of a bench trial on Tuesday.

Temple Christian School’s graduation was held May 28 in the sanctuary of Temple Baptist Church in Madison Heights.

Amherst County’s recently adopted cigarette tax is set to take effect Oct. 1, and the Town of Amherst might follow suit with its own tax.

U.S. Rep. Ben Cline, R-6th, chats with Abby Thompson, vice chair of the Amherst County School Board, during an Amherst County Republican Committee meeting on May 24.