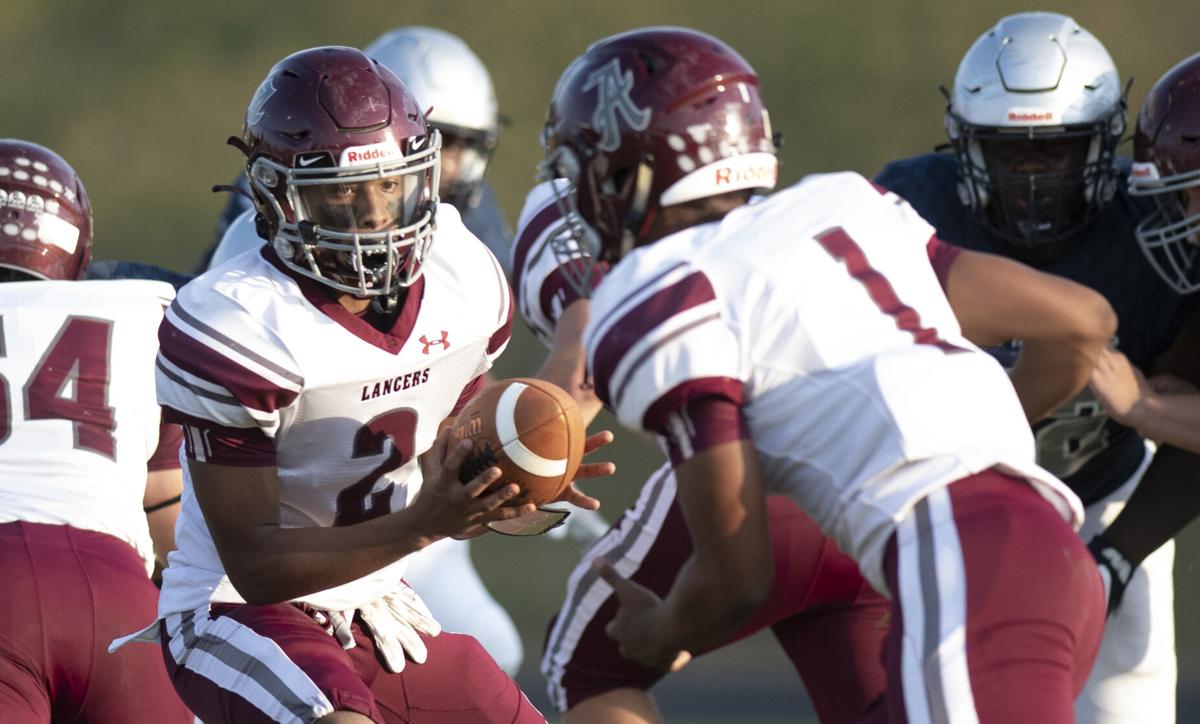 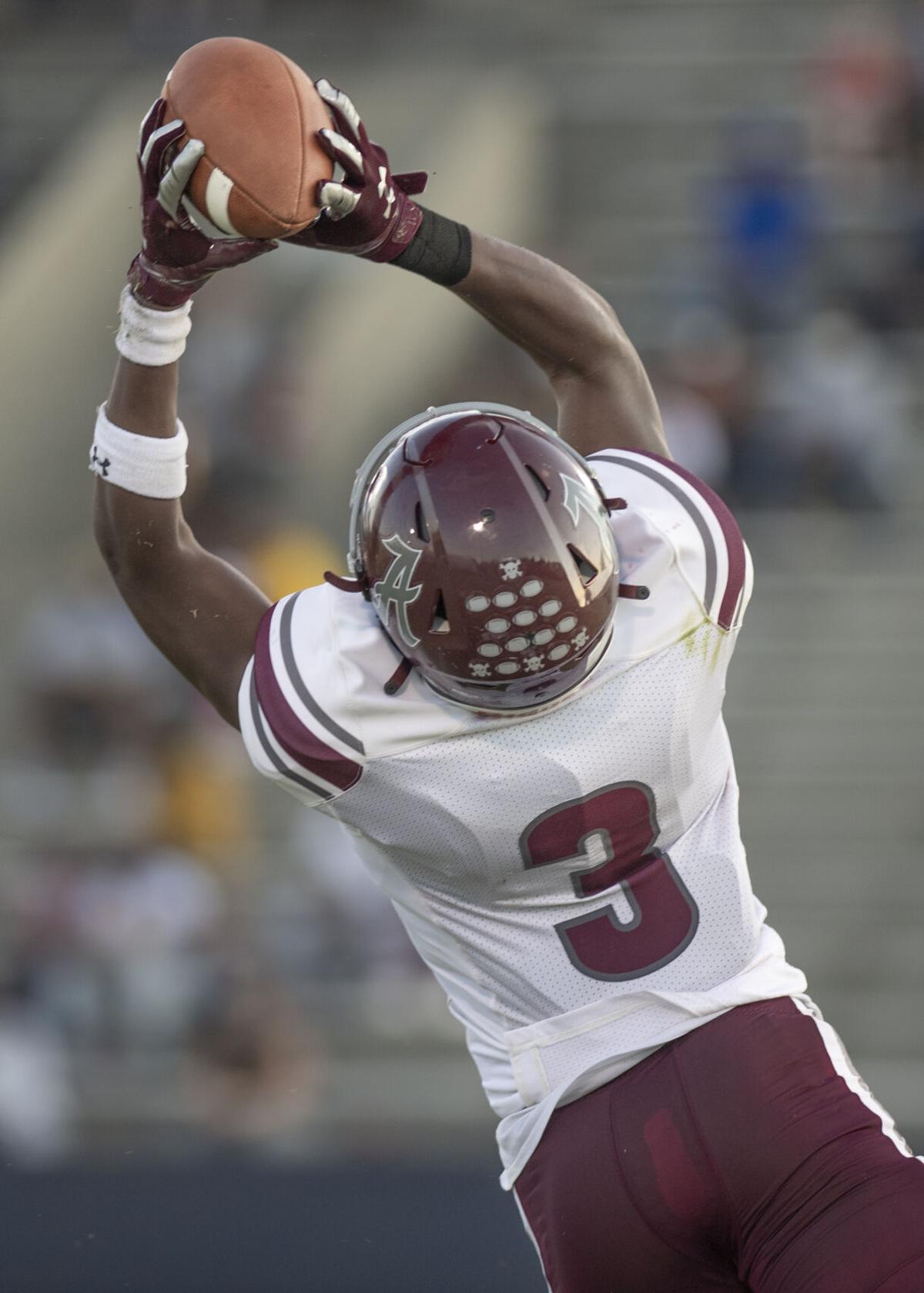 Lancer defender Tyleik Brown was able to knock Eagles ball carrier out of bounds on the three-yard line. 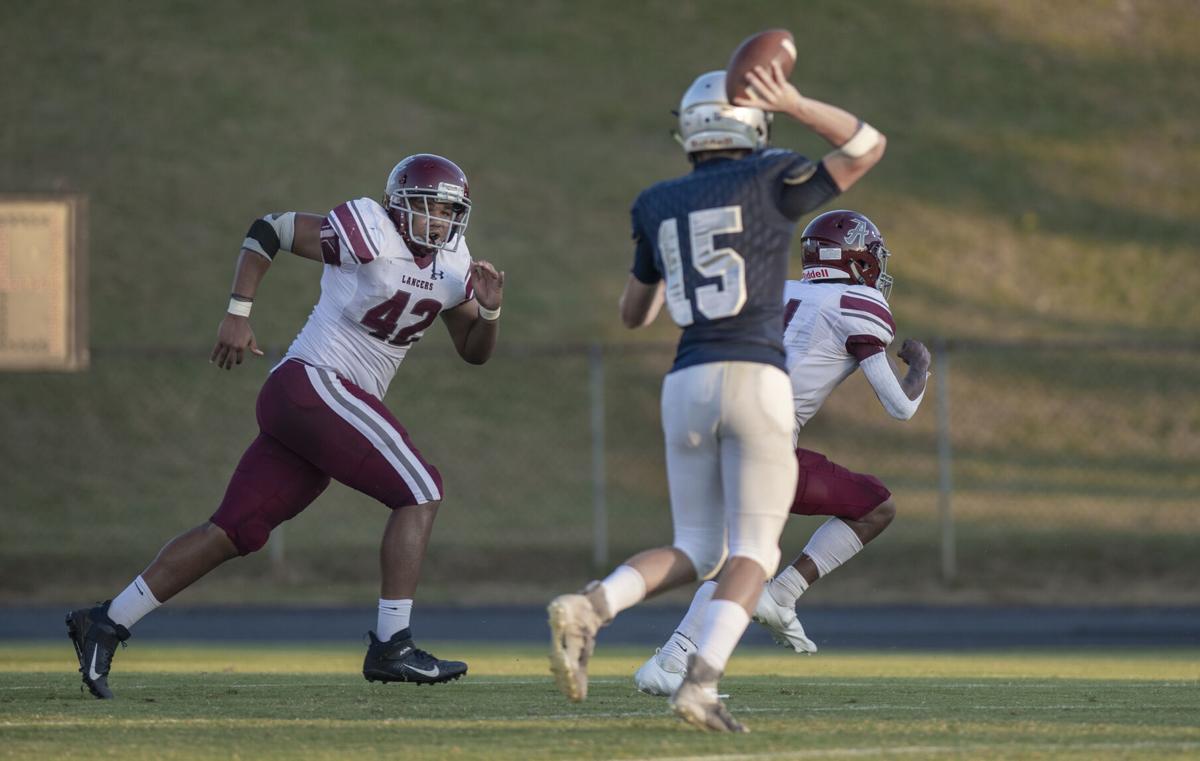 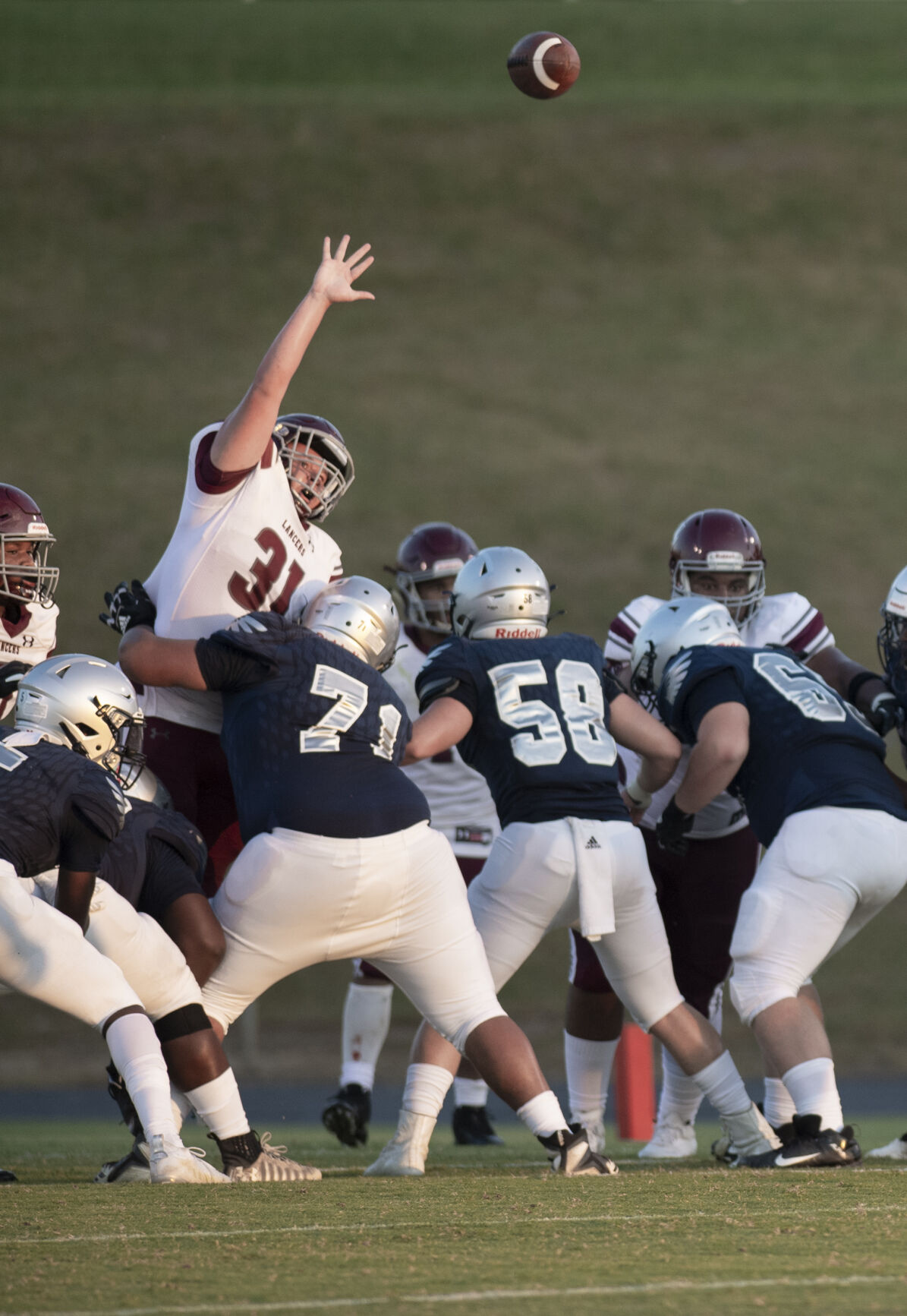 Amherst special teams player Luke Short leaps in an attempt to block an extra point attempt against GW of Danville. 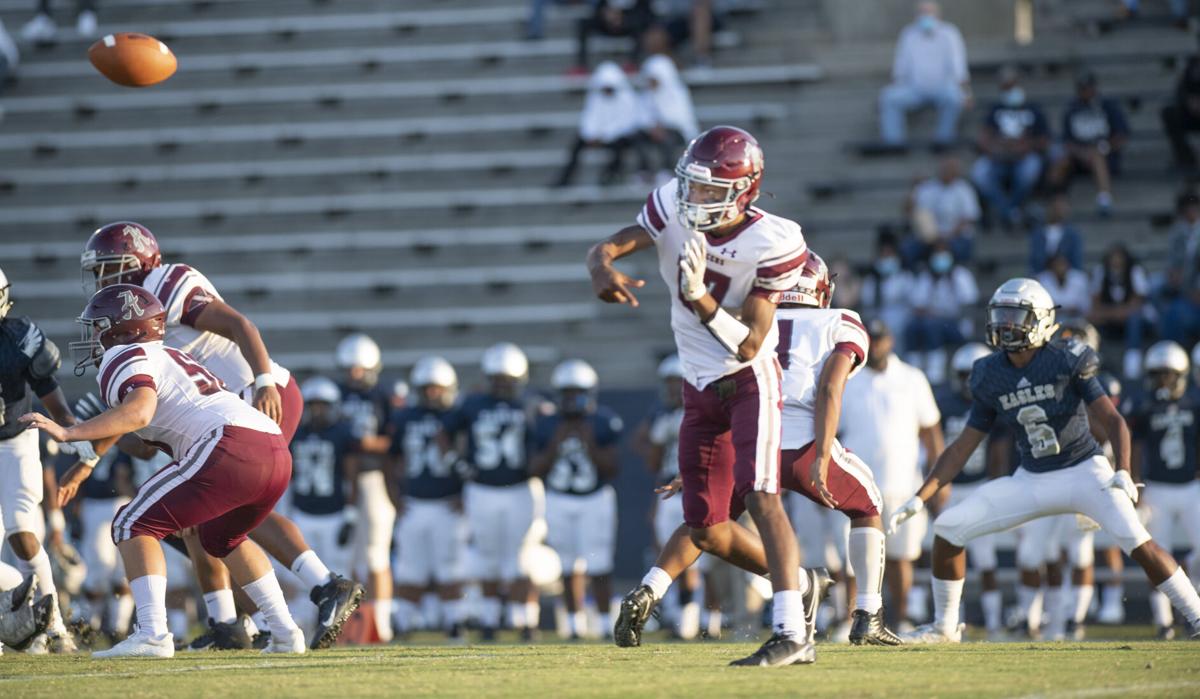 Jaizeon Hurt unloads a pass against GW of Danville.

Less than 72 hours had passed since the Lancers boarded their bus to head back up U.S. 29 from Danville. On just two days’ preparation, they were expected to rebound from their first loss of the season, and a lopsided one at that.

Amherst, a team that turned the ball over three times and failed to capitalize in the red zone on multiple occasions in that defeat at George Washington on Sept. 28, answered the call Friday evening. Lawrence Brown set the stage by returning the opening kickoff 95 yards for a touchdown, and the Lancers found new life for their third game in a week’s time, dispatching Granby 39-14.

“It was hard,” Brown said of the brutal stretch he and his teammates had just emerged from. “Great that we could get the win.”

After their 42-15 loss to GW, the Lancers (3-1) somehow had to both recover physically and take in an entirely new game plan in just two days of pads-free practice. Coach Bob Christmas, who saw his team as lifeless before and during the Sept. 28 game, challenged players to come out Friday with renewed energy.

Brown’s quick trip up the field on the game’s first play signaled Christmas’ team had listened.

“Put the momentum there,” Brown said, “and then we came out and kept going off the momentum.”

The Lancers didn’t find the end zone again in the first quarter, but they held Granby scoreless, then immediately took charge to start the second quarter. With the Comets pinned deep in their own territory, Amherst caused and recovered a fumble. One play later, Jor’dyn Whitelaw scored on a 6-yard run to give the Lancers a 12-0 lead.

That was the first of four Granby turnovers. Three of them, including that first fumble, set up scoring drives for Amherst. Interceptions in the second and fourth quarters helped Amherst increase its lead to 26-0 and to up the final margin to 39-14.

“We get after it on defense,” Amherst senior Vincent Sweeney said.

The senior was one of five players to score Friday for Amherst, which got all of its touchdowns on the ground. Sweeney scored on a 25-yard run in the fourth quarter after punching it in from the 1-yard line in the third.

Like the scoring drives that came after turnovers, and Brown’s long kickoff return, the Lancers got some help from Granby for Sweeney’s first TD. They recovered an onside kick to open the second half to set up the drive; no Granby player was anywhere near the ball.

“We worked on it,” Christmas said of the special teams play he said he’d been planning for days in case his team received to open the game, “and they executed it pretty well.”

Granby finally found some offense in the second half and answered with a long touchdown pass from Chad Bohn to Elijah Edmonds less than 30 seconds later. The 56-yard hookup down the right sideline cut the lead to 26-7. A Deric Washington 13-yard TD run provided a little bit of momentum and knocked the Comets’ deficit to just two scores after that.

Amherst put the game away with a pair of fourth-quarter scores, which capped two drives in which quarterback Jaizeon Hurt threw the ball just once.

The misdirection of the Lancers’ Wing-T offense meant for a long night for the Comets. Amherst racked up 361 of their 423 yards of total offense on the ground and came up 2 yards short of having two players with 100-yard rushing nights.

Amherst fell into a 14-0 hole thanks to a 3-yard touchdown run by Jakobe Dixon late in the first quarter and a 5-yard scoring strike from Byrnes to Dixon at the 8:36 mark of the second quarter.

“So we had a chance to take the lead early and didn’t capitalize,” Christmas said.

Amherst was coming off a 35-13 win over Jefferson Forest four days prior to the loss.

Amherst running back and outside linebacker Ja’merius Stewart suffered a twisted ankle while running the ball on the game’s first play from scrimmage. Amherst was also without another outside linebacker and tight end out on quarantine.

Amerst’s Jaizeon Hurt answered 58 seconds after GW’s second touchdown with a 47-yard touchdown pass to Lawrence Brown, and Darren Davenport’s PAT made it 14-7. But GW reeled off 14 points before ACHS could find the end zone again, then tacked on 14 more points to close out the game.

Amherst’s other score occurred with 1:59 left in the third quarter, when Tyleik Brown ran in a 7-yard touchdown and Vincent Sweeney followed with a two-point conversion run.

Amherst fumbled and lost the ball three times, including at the 1-yard line as the clock ran out in the fourth quarter.

Although they’re now back to a “normal” week ahead of their next game, the Lancers’ road doesn’t get much easier. Up next is a contest Oct. 8 against E.C. Glass at City Stadium, and Amherst finishes its regular season with Brookville, Liberty Christian and Heritage.

Sweeney, though, has confidence in his team: “As long as we stick to the script, I believe we can do anything.”

E.C. Glass capitalizes on mistakes to take down Lancers

For one quarter, and one drive in particular, things were going well for Amherst. The Lancers’ first possession resulted in an early lead, and…

The methodical, time-consuming drives that finished with scores in the first half were nonexistent for Amherst in the second half. Rustburg ge…

Varsity volleyball squad back in action, loses to Red Devils

The Lady Lancers volleyball team finally got back on the court last week following a pause on the season from COVID-19. The only problem was i…

In Forest, Johnathan Goins and Vincent Sweeney had two touchdowns apiece as Amherst added a second win to its resume, beating Seminole Distric…

Lancer defender Tyleik Brown was able to knock Eagles ball carrier out of bounds on the three-yard line.

Amherst special teams player Luke Short leaps in an attempt to block an extra point attempt against GW of Danville.

Jaizeon Hurt unloads a pass against GW of Danville.