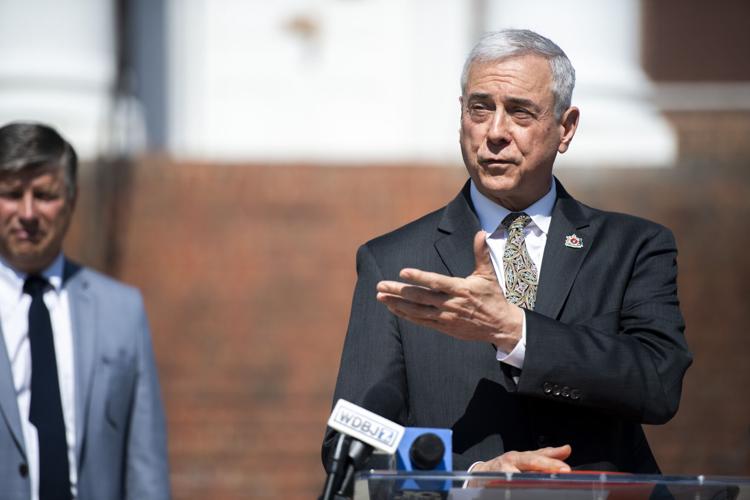 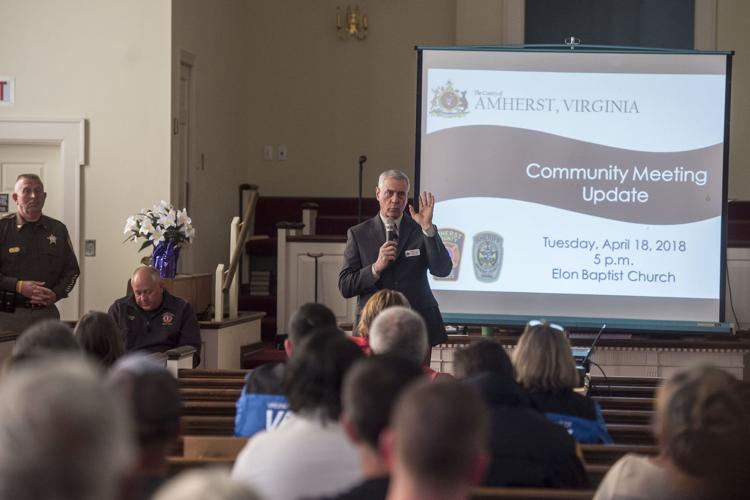 In this April 17, 2018, file photo, Amherst County Administrator Dean Rodgers talks to community members about the recovery efforts from an April 15 tornado in Elon. Rodgers tendered his resignation at the end of Tuesday’s county board of supervisors meeting, after a closed session held to “evaluate the performance of the county administrator,” according to the agenda.

Amherst County Administrator Dean Rodgers tendered his resignation during the county board of supervisors meeting Tuesday.

Rodgers' resignation is effective in two weeks, according to county documentation, released Wednesday, of the board's actions on agenda items at Tuesday's meeting. He resigned near the end of the board's meeting when a closed session was held to "evaluate the performance of the county administrator," according to the agenda.

Rodgers and board members David Pugh, Tom Martin and Jimmy Ayers could not be reached for comment following Tuesday's meeting. The board did not take any action except to adjourn the meeting, according to the county documents.

Supervisor Claudia Tucker, the District 2 representative and former board chair, said the majority of the board wanted his resignation for reasons she said she felt weren't enough to justify it. Tucker said the board leaned 3-2, without any formal vote, in favor of the resignation and she was opposed.

Tucker said in her nearly 14 years on the board she's seen county administrators come and go and Rodgers is the best she's ever worked with.

"He moved this county forward. He was an outstanding individual, lots of experience," Tucker said. "I would like to see him stay, but the majority of the board did not share my perspective."

Supervisor Drew Wade, the District 5 representative who began his first term in January, said Rodgers has been great to work with in getting him up to speed on county matters.

"He's been a valuable asset to the county," Wade said.

Wade did not comment on reasons for Rodgers' departure, noting it is a personnel matter.

"He's going to be missed and I wish him nothing but the best," Wade said.

Tucker also did not give specifics on what exactly led to Rodgers' resignation but said it didn't take her by surprise and she had hoped for a compromise.

"There were reasons given. None rose to the occasion of asking for his resignation," Tucker said of the closed session. "He was a gentleman about the whole thing."

Wade said in a phone interview he expected Rodgers might step away at some point and mentioned retirement.

"Did I anticipate it this soon? No," Wade said. "It is what it is. It's an unfortunate loss for the county."

Rodgers is the chief appointed official in the county's government of 217 active full-time employees and 113 part-time employees, according to a staffing report presented during the board's Aug. 15 retreat workshop.

Rodgers was appointed in July 2014 after the county received more than 20 applications to fill the administrator post following the departure of Clarence Monday, who served for two years.

Serving in the role since Aug. 1, 2014, Rodgers' stint of just more than eight years broke from a previous trend of short-term county administrators in Amherst.

"I think that speaks for itself," Tucker said.

A graduate of Baylor University, Rodgers obtained a law degree from the University of Utah School of Law and has a master’s of environmental law from George Washington University.

Rodgers’ experience in the public sector includes serving as general manager for the Louisa County Water Authority from 2011 to 2014. He also has an extensive military background including serving 28 years as a Judge Advocate in the United States Air Force, where he obtained the rank of colonel. Other leadership roles in the military included serving as legal counsel to the Department of Defense’s U.S. Country Representative to the United Kingdom, as well as military legal adviser to NATO Headquarters.

In a July 2014 interview, Rodgers said he hoped to make Amherst County a better place at his departure than he found at his arrival and he aimed to make the county more efficient, more accountable and more transparent.

Tucker feels he succeeded on those counts and more, noting his work in striving to improve Madison Heights through development and other areas and advancing compensation for county employees to make their pay more in line with surrounding jurisdictions, among other achievements.

"He will be missed," Tucker said, further describing Rodgers as an effective planner. "He was a chess player. He was always a second step ahead ... The whole thing makes me sad."

Tucker and Pugh took part in Rodgers' 2014 hire while Ayers and Martin began serving in 2016 and 2020, respectively.

During Rodgers' tenure, county events included the near-closure of Sweet Briar College in 2015, the closure of the Central Virginia Training Center facility in 2020, recovery from effects of an April 2018 tornado that devastated the Elon area, the return of the county's fair in 2019 following a lengthy hiatus and the addition to the county administration building, a project completed in 2017.

Also during his tenure, the county engaged in a massive initiative to become more business friendly, efforts to expand broadband so it is available countywide, disbursement of millions in federal stimulus money for county projects in the aftermath of the COVID-19 pandemic, the transformation of a former school on Phelps Road in Madison Heights into an apartment complex and the construction of a new transfer station for trash disposal purposes at the county landfill.

In July, the executive board of the Washington, D.C-based International City/County Management Association said it publicly censured Rodgers during its June meeting, saying he violated the group's ethics code on political neutrality by attending the 2020 national and Virginia Libertarian conventions and seeking appointment to the Virginia Redistricting Commission. Rodgers has denied violating the code and has said he resigned from the group as a result of that accusation.

Assistant County Administrator David Proffitt will serve the board as it looks for a new county administrator, according to Tucker and Wade.

"We had a lot of momentum," Tucker said of the county's direction, adding it's about more than a single person while also praising Rodgers as a leader. "We will get it back. We'll find another one."

Wine and Garlic Festival returns for 30th year in Amherst

After a two-year hiatus, wine glasses and spirits will be filled raised once again with the return of the Virginia Wine and Garlic Festival th…

Amherst-Nelson joint ag complex idea in limbo, land deal off without a partnership

After the Nelson County Board of Supervisors voted not to meet with Amherst County supervisors on a potential joint agricultural complex, Amhe…

Amherst board honors Bryant for service as public safety director

The Amherst County Board of Supervisors honored Sam Bryant, the county’s recently retired public safety director, with a resolution on Sept. 20.

A proposed residential mixed-use development heavily focused on senior living and consisting of more than 300 apartments, an assisted-living f…

Amherst County officials are eyeing ways to fund a sewer project on River Road in Madison Heights that will boost development efforts in the area.

Amherst County Public Schools can expect to receive a one-time bonus around the first of December, Superintendent William Wells said.

In this April 17, 2018, file photo, Amherst County Administrator Dean Rodgers talks to community members about the recovery efforts from an April 15 tornado in Elon. Rodgers tendered his resignation at the end of Tuesday’s county board of supervisors meeting, after a closed session held to “evaluate the performance of the county administrator,” according to the agenda.